Hunting4Connections Is Kind of Like Tinder for Outdoorsmen and Women

Outdoor Life and chill? A new online dating site aims to connect outdoorsfolk of all interests 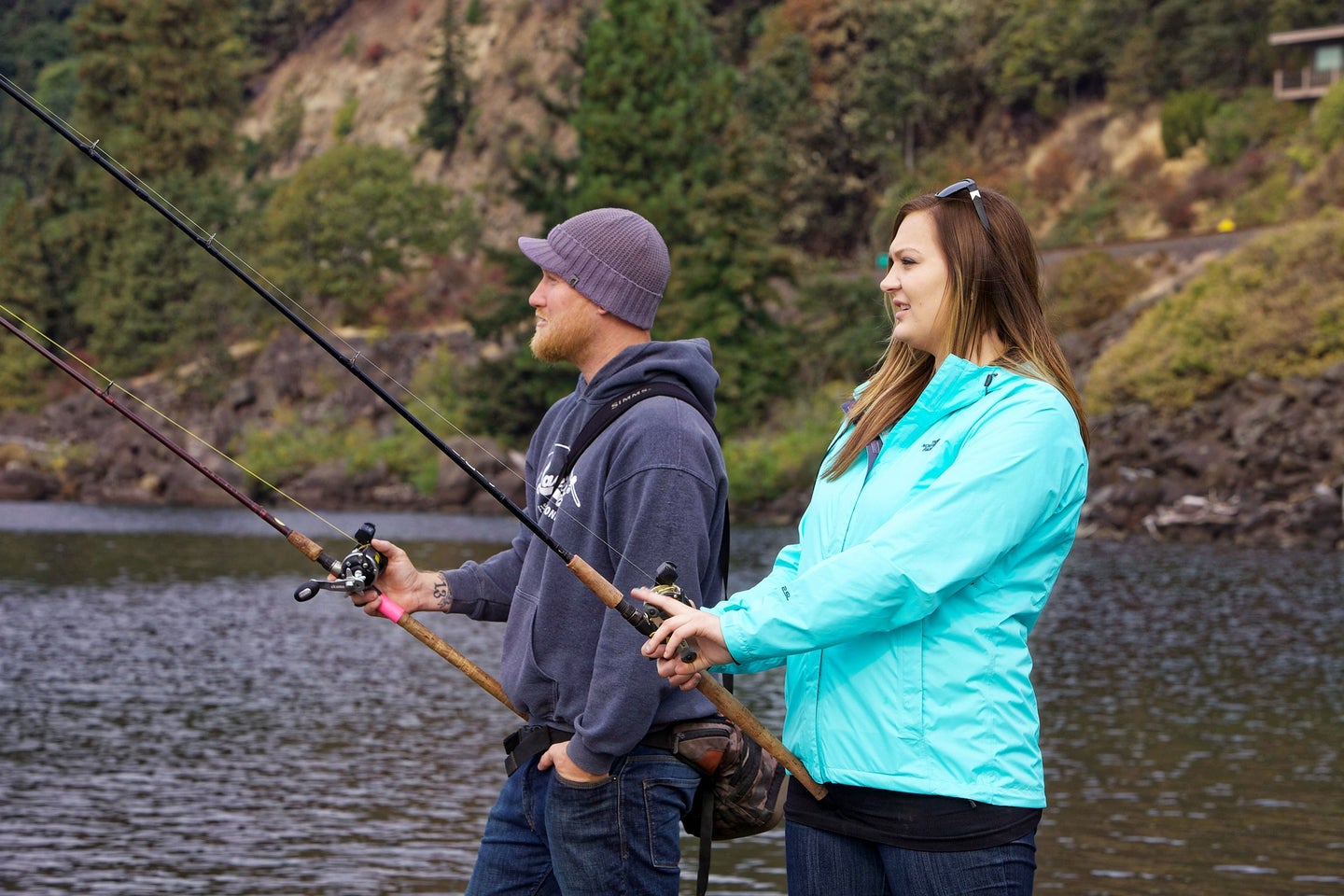 Hunting4Connections is the only dating site specifically for hunters and anglers, according to its founder. Pixabay
SHARE

There are so many ways to begin the story of a dating site for hunters and anglers: It’s like Tinder, but with real firewood; Where a hook-up isn’t a euphemism; Consider it a fishing expedition where the lucky angler doesn’t throw back their catch; This is one hunting pursuit that (hopefully) doesn’t end in death for one of the participants.

The origin of Hunting4Connections—a relatively new dating site for hunters, anglers, and outdoor recreationists—is actually a lot less frivolous. Its founder, Dana Sacia, wants to use this business to fund a safe house for abused women like her own mother.

If that’s a cold shower for readers, then understand that there’s a lot more to Sacia’s pursuit than her goal. She also aims to create a sense of community and common purpose, using a shared love of the outdoors as the starting point. She says that Hunting4Connections succeeds when relationships leave the digital medium of her website, app, and social media platform and become real-world meet-ups in America’s woods, waters, trails, and backcountry byways.

The kicker is that her platform isn’t only to facilitate romantic relationships, but also to connect folks with more platonic interests in the outdoors. Looking for a 3-D archery course in your new hometown? Or want to know where to go fishing during your vacation? Sacia hopes to help.

In this way, Sacia has always been a matchmaker. The Wisconsinite’s day job is recruiting executives for the financial industry. And, up until now, her side-gig has been administering a popular Facebook page that connects people interested in trading hunts and other outdoor adventures.

But with the creation of a website and members-only community at Hunting4Connections.com, she’s wading into the lucrative and, for some, slightly scintillating world of online dating, with the goal of bringing people together whose common passion is outdoor recreation. Sacia launched Hunting4Connections in late 2019, hoping to build a business around shared interests and passions that go beyond those of the physical variety.

The business is rooted in her website, which attracts several thousand visitors daily and which hosts about 6,000 members who pay a monthly subscription that allows them to communicate with other paying members. Subscriptions cost $19.97 for one month, $39.97 for three months, and $59.97 for six months. A mobile app is in development, and Sacia recently was informed by Facebook that her years-long campaign for advertising approval has been granted, so look for boosted posts on your social media feeds inviting you to connect with folks in your area who share similar interests and demographic profiles.

Hunting4Connections is part of an established trend in online dating and community-building that generates about $3 billion annually. Sites and digital services such as Match.com, Tinder, Bumble, and OKCupid have grown exponentially, especially during the COVID pandemic that discouraged in-person meeting. According to MarketWatch, online dating has become the most popular form of dating for LGBTQ couples, and the second-most popular way to meet partners for straight couples (the first is meeting through mutual friends).

Nearly every mutual interest is served by an online dating service. There are meet-up sites for “lonely, attractive inmates” looking for pen pals, redheads, people with a mutual love of oceans, cats, and sci-fi, the last of whose motto is “Love long and prosper.”

But until now, there hasn’t been a relationship broker devoted to outdoor recreation, says Sacia.

“I would say FarmersOnly.com is the closest thing,” she says. “It started out as a niche, serving to connect just farmers and ag people, but it’s expanded to include a lot more than just farmers, including a lot of outdoor enthusiasts. But they don’t match [users] based on specific outdoor hobbies, which is what separates and defines us.”

The Origin of Online Love for Outdoorsfolk

Sacia points to two formative moments for the origin of Hunting4Connections. The first is a pledge she made to herself as a teenager in La Crosse, Wisconsin.

“I was 19 years old, and said that when I turned 40, I was going to build a domestic abuse safe house to honor my mom’s struggle with domestic violence.”

But Sacia says that when she turned 40, she examined her life.

“I was stuck in a toxic relationship myself, which was very similar to my childhood. I realized I had reached that age when I promised myself I would achieve that tribute to my mom and a way to help women like my mom. But I was stuck. How can you promote a healthy relationship when you’re not in one?”

Sacia is careful to note that not everything about her former marriage was dark.

“My ex introduced me to hunting, and for that I’ll always be grateful,” she says. “I started hunting 13 years ago and my passion for it just consumed me. It was so important to me that it became a big part of my identity. I stated posting everything on Facebook, and I got all these messages in return. Nothing inappropriate, but the gist of many messages was, ‘How do I find a girl like you, who loves to hunt and fish?’ Or, ‘Do you have a sister? Or a mom? Or a cousin or grandma?’ One day this guy literally said to me, ‘I just want to find somebody to share my lifestyle with.’ The lightbulb went off, and I thought, Oh my gosh. I was single, and I knew that when I was ready to date that I would never date someone who didn’t have the same hobbies and passion that I did. There’s a dating site for every niche out there except for people like me. And that’s when I decided that I’d build one.”

Her efforts to build a community around shared interests actually started on Facebook, where Sacia founded a page centered around exchanging hunting and fishing trips. That page, which now has 46,000 members, was the basis for her conclusion that a dating site might have traction.

“When my marriage ended, I wondered how I could continue my education [as a hunter],” says Sacia. “Just because my marriage was ending, I didn’t want my passion for hunting and fishing to end. But I needed to some help. I needed to learn more, and to have people help me learn. I needed a place where it was safe to ask questions and not be judged. I built the group on Facebook for people who love to hunt and fish, and where it’s okay to ask questions and not be judged.”

The group grew quickly, and Sacia repeatedly got invitations for more than just hunting and fishing outings. There was a need among her growing audience for a deeper sort of connection based around shared outdoor interests.

“I wanted to branch out into a dating site, and I wanted to call it Hunting4TrueLove,” she says “But then I realized that not everyone is searching for love. They’re searching for connections and for deeper meaning around shared values and interests. So that’s how the Hunting4Connections came about.”

Dating Not Just for Hunters and Anglers, But Other Outdoor Enthusiasts, Too

While hunting and fishing are at the center of Sacia’s personal orbit, they’re not necessarily the hub of Hunting4Connections, which has sections devoted to the wider reach of outdoor recreation, including hiking, biking, motor sports, and boating.

“It’s a dating and friending site for outdoor enthusiasts,” she says. “Getting outdoors is what lights the belly on fire, whether that’s kayaking, or biking, hiking, camping, watching outdoor sports, hunting, or fishing. The site allows people to connect, find a date, a relationship, a new friend, or an activity partner.”

But ultimately, Hunting4Connections isn’t about learning where a Ducks Unlimited banquet will be held or finding a crappie-fishing partner. It’s truly a dating site, and Sacia says the next months will be telling for its success.

“At the moment, we have about 6,000 subscribers, and add between 20 and 40 per day,” she says, but she doesn’t share demographic details, regional info, or what outdoor activities subscribers list as their favorites. She also has not commented on whether her site is only for straight singles, or if it’s LGBTQ-friendly.

“I can tell you that we’re about 60 percent male and about 40 percent female,” she says, noting that she wants to appeal to more women. “If you have the women, the men will come.”

Sacia says that so far, because both of Facebook’s resistance and because of pandemic social-distancing restrictions, the site has been more or less blind to geography. That will change in the coming months.

Read Next: Hunting Can Ruin Your Marriage. Or Make It Stronger

“In the beginning of our site, we were more focused on facilitating connections between people, whether they were in neighboring towns or 10 states away. But the success of a dating site is creating opportunities for folks to actually meet up, so you can expect us to do more niche marketing, targeting one state and then another, moving along to build participation within states and even within towns and cities.”

Sacia says the proof of the power of her vision is the number of relationships—and even marriage proposals—that have come from connections consummated by the website.

So, what about her ultimate goal, building a safe house for victims of domestic abuse?

“That remains my fundamental goal,” says Sacia. “It will take some time for the site to be profitable enough that I can quit my day job, but then we’ll create a foundation with that as its purpose. When that happens, I’ll know that this was all for something, even if it took longer than I anticipated back when I was 19 years old and living in La Crosse with the whole world in front of me.”