It’s fair to say that Nellie’s boardinghouse manners obscure her finer points, and if you doubt that, then you’ve never seen her contort her body to sniff the passage of her own gas 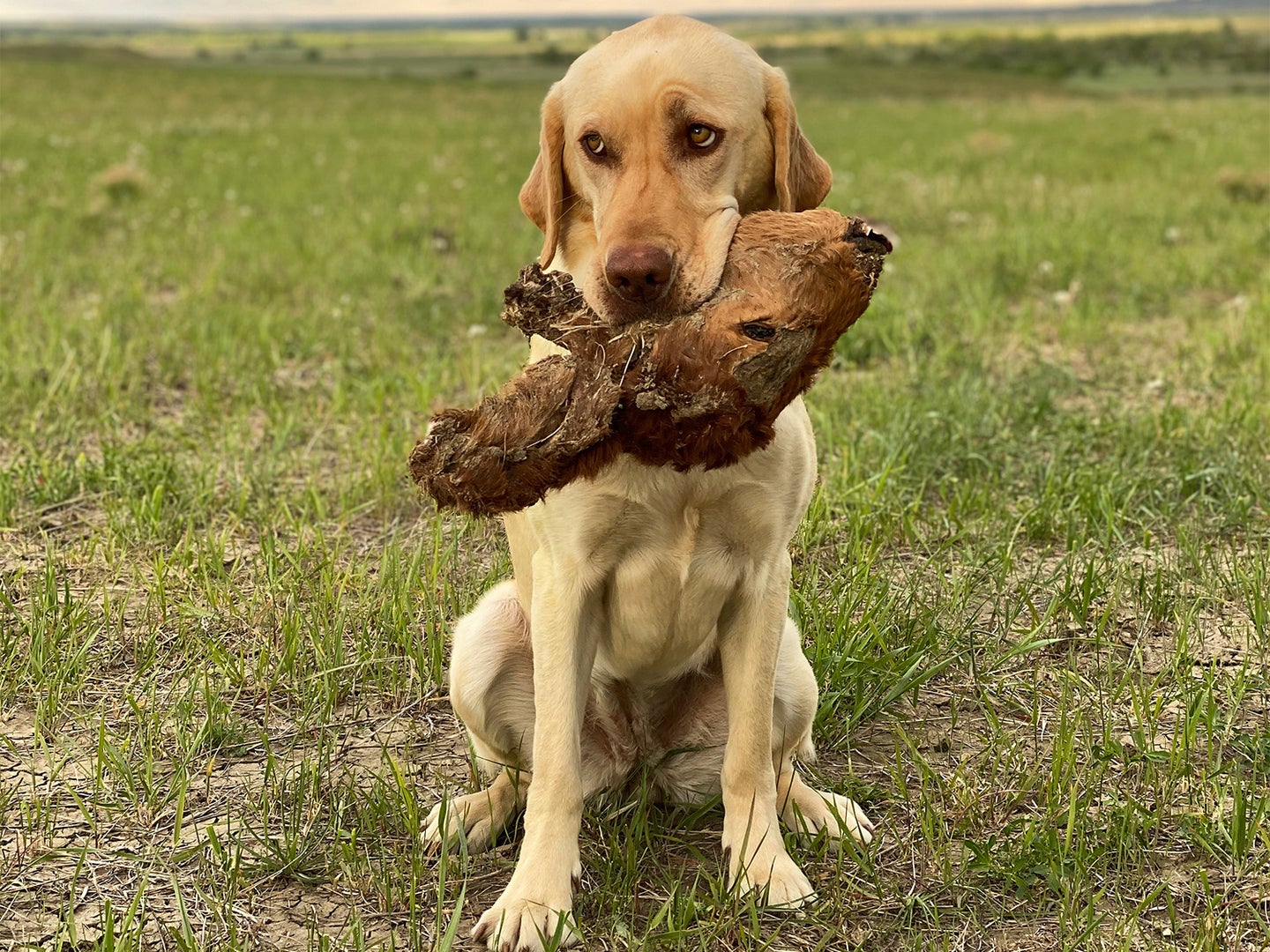 The author's yellow Lab, Nellie, with a calf head she found on the ranch. Andrew McKean
SHARE

If, as they say, people select their dogs based on shared qualities, then I apparently ­imagine myself a puckish orphan with appalling food habits and a love of the putrid combined with an overdeveloped sense of both entitlement and guilt.

Nellie is a yellow Lab who turns 4 years old next spring, and to be fair, she also has some appealing traits, which I may or may not share. She has a surprisingly soft mouth and can scent a rooster from the next township, is as athletic as a lynx, and simply won’t give up on a retrieve, even at the risk of her health. She’s obnoxiously playful.

But it’s also fair to say that Nellie’s boardinghouse manners obscure her finer points, and if you doubt that, then you’ve never seen her contort her body to sniff the passage of her own gas.

I didn’t actually pick Nellie. She found me, the way listeria finds sanitarians, after my previous Lab, Willow, died in a hunting accident. If Willow lived to serve and obey, Nellie lives to find rotting ­morsels, and then bring them home.

They say that people receive the dogs they deserve, and if I think back on my own formative years, I see bits and pieces of myself in Nellie, minus the love of eating my own vomit and smelling my own farts. I was a stray. I roamed too widely, didn’t come when called, and ran around without a leash or collar. I ­preferred experiences over stability.

Then I met the woman I went on to marry, and I became more interested in building a home and a future than sniffing around. I recall the day, when we were dating, at a county pound where I had gone to adopt a dog, that I recognized in her a sound judge of animals but also, more significantly, a person with the goodness and grace to leaven my intemperate mischief.

That was 25 years ago. Over that time, we’ve raised three children and many dogs together. Sometimes, in the quiet moments when I’m sitting on a tailgate or waiting for ducks to fly, I’ll twist the wedding ring on my finger, and I’m ­reminded of the simple joy and stability it represents. It also serves to tug me home, the way gravity pulls two objects toward each other.

These days, that peace is often interrupted by Nellie, typically doing something boisterous and borderline unforgivable. In our first two years together, Nellie’s headlong enthusiasm earned her the nickname “Dumbass.” There was the time she ate rat poison in my neighbor’s barn, the time she swallowed a golf ball (then passed it eight months later, in the most explosive evacuation you can imagine), the time she threw up two pounds of maggots hours after gorging on a dead cow.

Happily, she’s slowing down a bit and recognizing her actions have consequences, but while I’ve managed to curb her headlong drive, I do so reluctantly. Because while Nellie’s nature makes her a difficult companion and an unholy housemate, it makes her a superb hunter. And there are times when I’ve abandoned my expectations of obedience to witness a million years of canine instincts wire her to an invisible current of smells and tells that nearly always produces a bird.

In these moments I overlook Nellie’s transgressions and revel in the rare opportunity to participate in interspecies cooperation, a predator and a human hunting together, not because they must but because they choose to. If there’s been an evolution in my relationship with Nellie, it’s that while she once hunted for herself, she now hunts for both of us.

When I miss a shot, she looks back at me with disdain. But when I connect, and she lays the retrieved bird in my hands, an arc of communion sparks just quickly enough to notice before she’s off to flush the next bird.

Nellie has also reminded me of a quality that modern hunters have lost in our pursuit of the best gear, the biggest buck, or the top dog. It’s the notion of sufficiency, that sometimes it’s better to be adequate and fulfilled than hungry and driven. It can take years to recognize that settling down doesn’t mean settling.

Nellie remains a dumbass. She’s still attracted to the fetid and the funky. She still huffs her own gas. But she no longer has to inspect every malodorous scent on the breeze. She no longer strains at the boundaries I establish. She comes when called. She stays within shotgun range. I’ll take credit for some of that biddability, just as I credit my spouse with finding it in me. But I’ll also credit a piece of jewelry that connects us almost as effectively as a wedding ring. It’s an electronic collar, and in those increasingly rare moments when instinct overrides obedience, it’s an invaluable reminder to Nellie of who calls the shots.