Confessions of a Belly Crawler: Late-Season Turkey Hunters Who Adapt Have Better Success

Don’t get wrapped up in classic turkey tactics. When the hunting gets tough, try something different 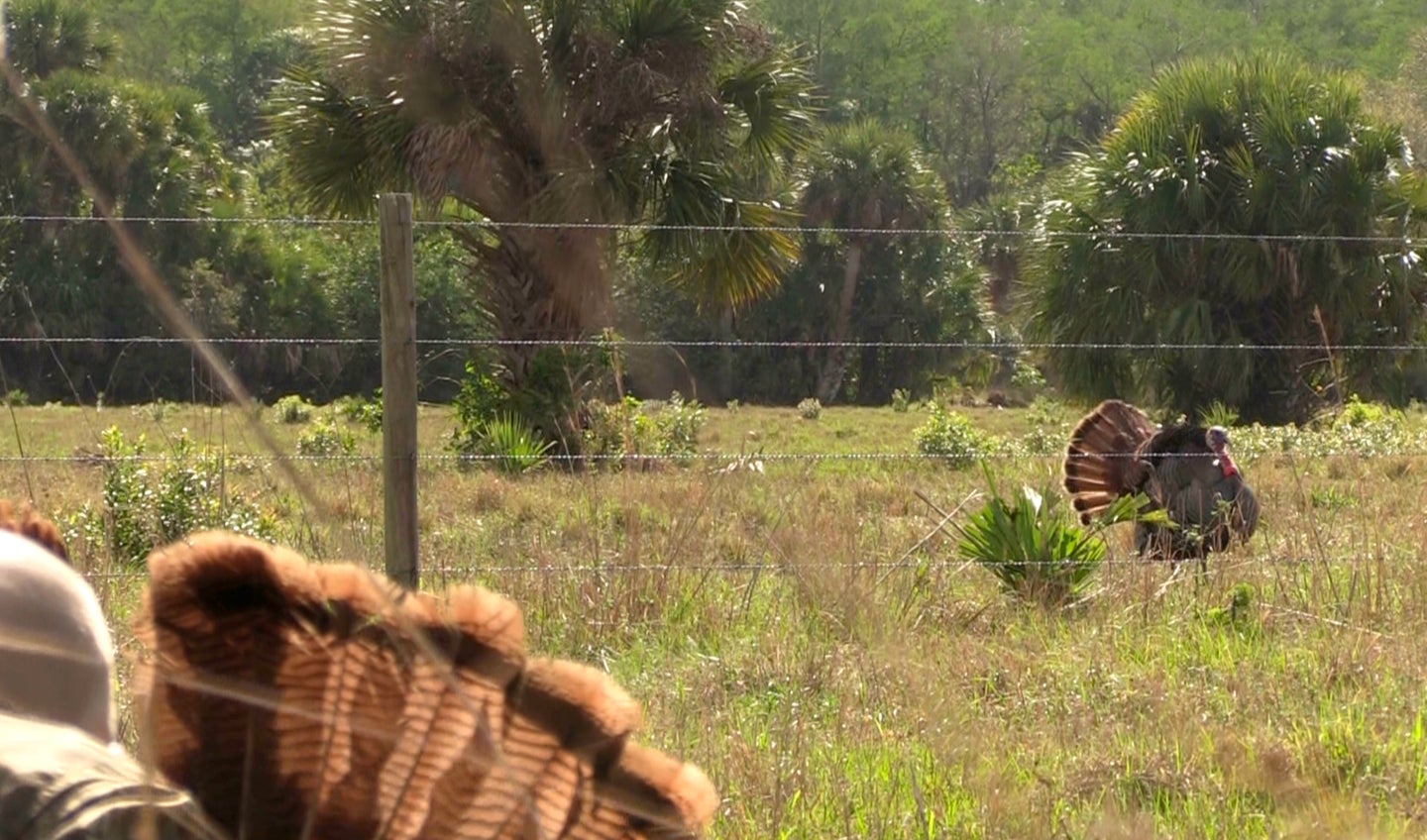 Crawling up on a strutting longbeard. Natalie Krebs
SHARE

I was lying in the tall grass of a Wisconsin farmer’s field edge, peering through the rain and wilting feathers of the tail fan in my hand at four turkeys on the hillside below. Two jakes were on top of the opposite hill, with two more–I couldn’t tell if they were jakes or toms—sitting in the clover another 30 yards beyond. Behind me, editor-in-chief Alex Robinson was stretched out in the mud, unable to see the birds and waiting for me to make a decision. Before I did, though, I wanted his take.

Alex raised his head cautiously, then immediately flattened himself back into the ground.

Well, yeah, I thought, checking to make sure my fan was still concealing us. That’s kind of the point.

The two jakes he was talking about had been watching me for five minutes. But they didn’t seem alarmed, either. They took turns dropping their heads to peck at the dirt, and they mostly stayed in the same spot. There wasn’t a way to get close enough for a shot without them spotting me. But as long as I convinced them I was a turkey, it might not be a problem.

Alex’s reaction to being spotted by the jakes is that of a veteran turkey hunter. Those same instincts had helped him kill a longbeard just hours before, in the classic way: Set up near the roost, don’t move a goddamn muscle, and shoot the unsuspecting bird you call into your decoys.

When it comes to turkeys, I’m a jack-of-all trades and master of none. I’ve called in birds, but I’m not winning any calling contests in this lifetime. I’ve had some memorable morning roost hunts, but they’ve proven an exception, not the norm. Instead, I’ve killed more midday or silent afternoon strutters by abandoning textbook tactics and taking what the day throws at me.

The first time I snuck up on a turkey—army crawling 270 yards across the Nebraska prairie without a fan or reaper decoy—I did it because it seemed like my only option. The strutter had two hens with him in the wide-open, and he wasn’t going anywhere. Even if my calls could have convinced him to leave the hens, he wouldn’t have been able to hear me. The wind was blowing 20 mph.

But that same wind made a different tactic possible. The rustling, rippling grass covered my noise and movement as I crept closer over two hours and eventually popped up at 20 yards to shoot a very surprised bird. The spot-and-stalk hunter in me was euphoric. I’d made something happen instead of waiting around an empty field, hoping another longbeard would spot my decoy.

A few years ago, I was chasing Osceolas with Field and Stream hunting editor Will Brantley when we got pinned down in an open cow pasture, several hundred yards off from toms circling a few hens. Brantley voted to keep trying to call them in; I wanted to close the gap. After a lot of swearing, we compromised. The two of us belly crawled more than 100 yards through cowpies steaming in the Florida heat to set up in a cool patch of live oaks. From there, Brantley coaxed the two longbeards a short way into gun range.

Read Next: The No-Excuses Turkey Season: How to Make this Spring Hunt Your Best One Yet

Sure, it’s fun to call to gobbling turkeys on the roost and shoot them when they commit. But when that doesn’t work and they’re not gobbling at midday, what’s a hunter to do?

This scenario unfolded for me every day I hunted southern Indiana this spring. Every morning I scouted before the season dawned clear and warm, with plenty of gobbles. Plunging temperatures and a snowstorm on opening day rocked those gobblers’ world, and they shut up for a week. Eventually, I stopped setting my alarm and hunted a field edge late in the afternoon. I took a nap, then called in a silent longbeard, shooting him just in time for happy hour.

Hunters who try the same approach day after day, all season long, remind me of that quote attributed to Albert Einstein: “Insanity is doing the same thing over and over again, and expecting different results.” Einstein wasn’t a turkey hunter, and you don’t need to be a genius to know that if turkey behavior changes as the season wears on, your behavior should, too. So if the birds and weather are being weird, maybe it’s time to try some weird tactics.

Eventually, I just decided to see how close I could get to those four turkeys. I left Alex on the hill and started sneaking straight toward the jakes.

I was worried the terrain would give me away, since I had to crawl face-first down the hillside with my legs bunching and stretching out behind me. But I made it down the clover-covered slope, pausing to rotate my fan like a strutter whenever the jakes started to look antsy, or I needed a breather. As I closed in, the two jakes drifted over to the two sitting turkeys.

At 20 yards, I got to my knees and rested my shotgun across the fence between us, sandwiching my sopping fan against the wire. By this point, the turkeys were starting to get suspicious. All four were on their feet and staring at me, which finally gave me the view of their beards I needed. There was no tom in the bunch after all, so I picked out the biggest jake and pulled the trigger.

I’ve still got another tag and a few days left in the season. If I manage to kill another turkey, I’m sure it won’t be because I tried pulling the same stunt twice.

One final note on safety: Never fan or reap turkeys on public lands with other hunters around. Before trying these tactics on private land, make sure you’re the only hunter on the property.