A recent Facebook video shows the brutal outcome when a wolf decides to attack a dog. (Graphic content warning) 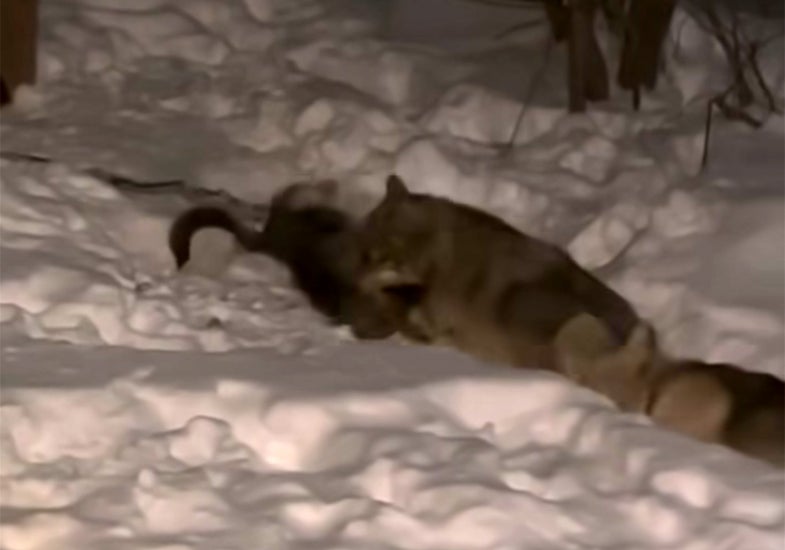 A dog doesn't stand much of a chance in a fight with two wolves. via Facebook
SHARE

Wolf management is a hot-button issue in many states—and has been since the reintroduction of Canadian wolves to the West. Love them, hate them, or fall somewhere in between, more wolves will be expanding into more regions of the country. Colorado, for example, is working out plans to reintroduce wolves in the state.

The effects wolves can have on other wildlife and livestock are common points of debate, but what about domestic dogs? As increasing populations thin the buffer between wolves and people, attacks on dogs may bring human-wolf conflict to the average population—it won’t be something only ranchers deal with. A recent Facebook video shows how helpless a dog is when a wolf decides to attack. But is it a realistic threat to your dog in wolf country?

Although domestic dogs are generally accepted as wolf descendants, wolves are a completely different animal. It’s easy to see why much of the general human population places wolves on a pedestal. They are wild, majestic, smart, and perceived as relatable, given our tight-knit relationship with domesticated canines. Wolves don’t care about your suppositions, however. Given the chance, they will kill your dog.

Some might think that wolves and dogs would be friends, but all it usually takes is your dog getting a single whiff of a wolf to convince you otherwise. Hell, wolves aren’t even friends with each other. Here in Alaska I spent several years skinning for a local fur buyer and put up hundreds of wolves. I had wolf smell on me all winter long and any domestic dog I encountered either got its hackles up or wet itself.

The late Outdoor Life contributor Jim Rearden’s book Alaska’s Wolf Man, about the famed Frank Glaser, elaborates on the subject. Years after encountering a pair of mixed wolf-dogs, Glaser captured a male wolf and bred his own wolf-dogs to pull sleds. He noted that they had the distinct smell of wolves, and any time he pulled into the small town of Healy, any loose dogs cleared the street at the smell and sight of them.

Whether it’s the centuries of separation, I don’t know, but an animosity between wild and domestic canines certainly exists. Similarly to how some coyote hunters will train their dogs to help hunt coyotes, Glaser’s wolf-dogs would howl and call in wolves for him to shoot, yipping, jumping, and loving every minute of it. He even had a story about it published in the pages of OL titled My Lady Judas.

Attacks by Wolves on Dogs Are Relatively Common

It’s not normal for wolves to attack humans, but it’s not unusual for them to kill domestic dogs—even in the backyard. Living in Fairbanks, Alaska, it’s never surprising to hear of wolves eating dogs “off the chain.” Another Fairbanks resident, John Reeves recently mentioned it on a Joe Rogan podcast appearance, and it’s true. When passing through the edges of populated areas, it’s not uncommon for wolves to prey on domestic dogs.

Two or three years back, a couple of fat-tire bikers were riding up a frozen creek just down the hill from my house when they lost track of their dog. They turned around and backtracked to find only a mess of blood, dog hair, and wolf tracks in the fresh snow. Some years attacks are more frequent than others, but a few dogs are lost every year around here.

In 2007, there were packs of wolves in different parts of the Fairbanks area ravaging dog yards. A re-posted story written for the Fairbanks Daily News Miner by Tim Mowry that year talks about the winter of 1974-75 when wolves killed an estimated 165 dogs in the Fairbanks area.

This happens on occasion in the Lower 48 as well. In 2021, a Minnesota mayor’s dog was attacked by wolves while on a hike and it narrowly escaped.

Wolves don’t attack dogs just because they’re starving either. In 2016 or 2017, while skinning for that fur buyer, I handled a big, fat, and healthy female wolf that a guy had shot while it was trying to get his terrier. He’d let his dog out to pee and saw it come running back with a wolf on its heels. With his dog inside, he called a friend and asked what he should do.

“Get a rifle and put your dog back outside,” was the practical “Fairbanks” response. So, that’s what he did.

Hunting dogs (particularly hounds) are at a high risk of being attacked by wolves, too. When hunting in wolf country, they’re usually running a track away from the close supervision of their owner and making a lot of noise. In 2016, a reported number of 41 hound dogs were lost to wolves in Wisconsin.

A Dog Doesn’t Stand a Chance

Both dogs and wolves are canines, but that’s about the extent of their similarities. If a wolf decides to attack a dog, the dog will be relatively helpless to fight it. Wolves are savage killers; they must be to survive—even within their own hierarchy.

Glaser had plenty of time to observe the differences between wolves and dogs in his decades of breeding wolf-dogs and hunting and trapping hundreds of wolves. In Rearden’s book, he describes his dog Kenai, which was three-quarters wolf.

“He broke caribou leg bones to get the marrow as easily as I can peel an orange; caribou bones are the hardest and toughest of any of Alaska’s big-game. An ordinary dog can’t break caribou bones, although wolves can.”

Glaser noted that his wolf-dogs ate and killed like wolves and he went on to describe an encounter his three-quarter-wolf dog had with a pair of attacking hundred-pound malemutes in Fairbanks in 1931.

“I looked around in time to see them both dive at Kenai. Kenai staggered but didn’t go down, then he turned and went to work. I was hunting for a club to break the fight up, but I tried to watch the fight at the same time. Kenai was a foot-fighter—that is he always bowed his neck, holding his head low and to one side, allowing the other dog to clamp down where his heavy wolf ruff protected him, and then he went for a foot. As soon as one of the malemutes had a grip on his neck, Kenai reached down, grabbed a front foot and started breaking bones. No dog can stand that. The instant the big malemute let go and tried to pull his foot free, Kenai released him, and as the dog fell backward, Kenai pounced. He slashed the malemute’s belly open and yanked his guts out.

The second dog suddenly decided he had very urgent business on the other side of town, and he lit out sprinting. He didn’t get two hundred yards before Kenai caught him. His insides were on the ground, and he was kicking his last by the time I got there.”

How Real is the Danger to Your Dog?

From a purely statistical standpoint, there’s little chance your dog will be one of the unlucky pups on the biting end of a wolf attack, even if you live in wolf country. But it does happen. As wolves continue to expand their ranges in the United States, it will happen more—perhaps even more frequently than in areas like Fairbanks. Alaska has robust populations of wolves, but we don’t have the widespread infrastructure and relatively small, encapsulated areas of wilderness that exist in the Lower 48.

If you live in rural areas or even suburbs where wolf populations are expanding, or you travel with your pets in wolf-dense areas, there will be some element of risk (especially where hunting or trapping wolves isn’t allowed). You may not be able to eliminate all that risk, but keeping your dogs close and leashed in the woods, and bringing them inside at night can help minimize it.