A Bow Is a Bow: 5 Ways That Shooting Compounds and Trad Bows Are the Same 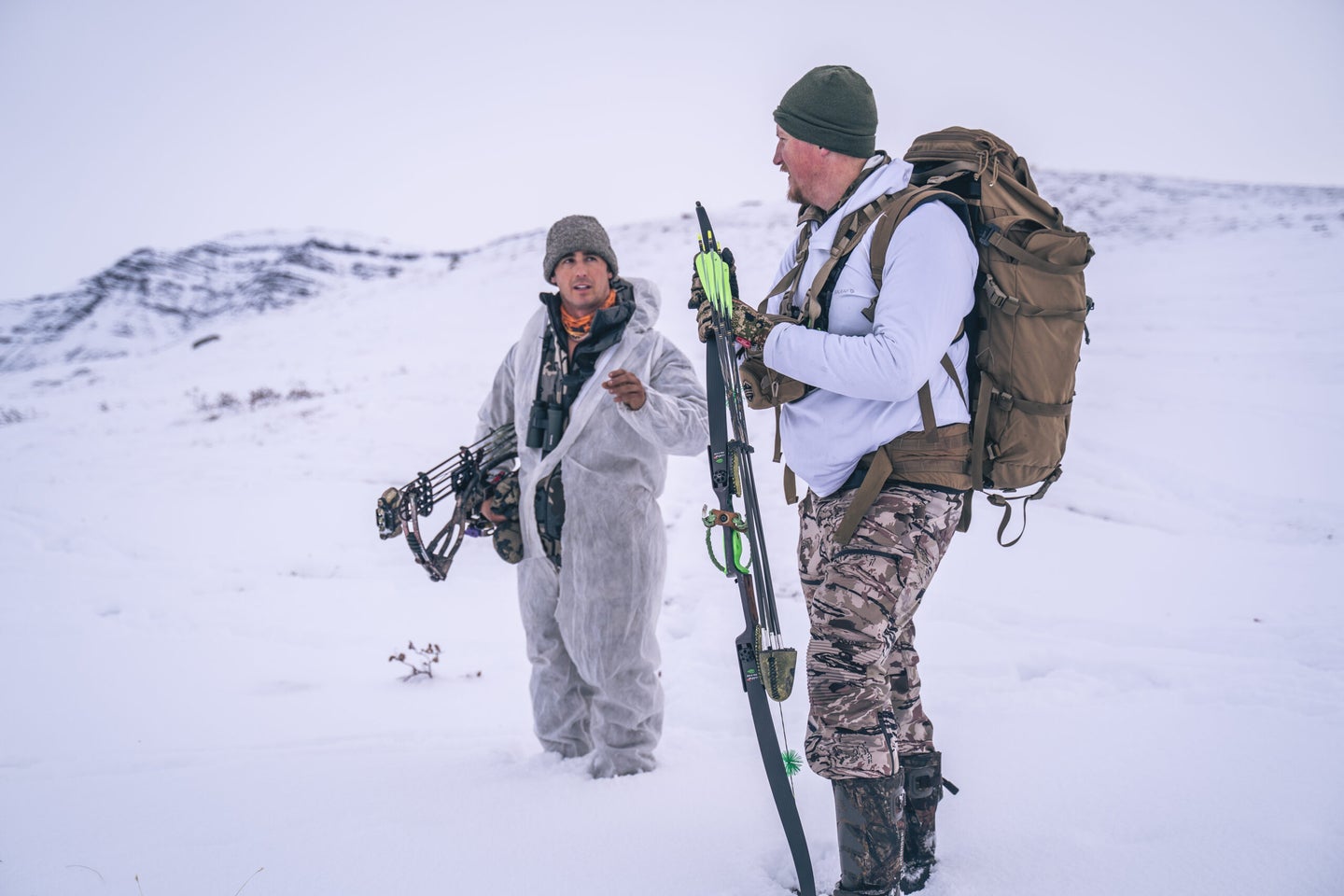 Compounds and trad bows are different, but many of the skills and movements to shoot them are the same. Tanner Denton
SHARE

Compound bows have been popular for decades, and their performance is better than ever. In recent years, traditional archery has seen a resurgence in popularity, with many shooters trading in their wheels and cams for “trad bows” (longbows and recurves). Traditional bows are generally accepted as being significantly more challenging to shoot, and many hunters are embracing that challenge.

I’ve gone about it in a sort-of backwards manner. I’ve shot bows all my life—usually hand-me-down compounds and longbows without sights. I bought a new compound when I was 18, but it never got much use. I began shooting recurves and longbows exclusively back in 2011 and never looked back—until now.

After a few years working with Tom Clum, a Level 4 NTS Coach, I decided to start working my way up the coaching certification ladder myself. The NTS method (National Training System) for shooting a bow changed my archery life, and I have an insatiable appetite to learn more about it. NTS is a standardized method for shooting a bow based on biomechanics and developed by National Head Coach, Kisik Lee.

After earning my Level 3 certification—and at the urging of Clum—I decided it would be wise to get a compound and to learn how to shoot it too. Compound shooters need coaching just like trad shooters do, and the NTS method applies to recurves, longbows, and compounds.

I got myself a Hoyt Highline compound that accommodates my long draw length, and quickly got to shooting. Most people think that because compounds and trad bows look and feel so different, that shooting them would be totally different too. Many competent compound shooters struggle when picking up the recurve because they aren’t applying many of the concepts that translate between compound and trad bow shooting.

Sure, they are different styles of bows, but you’d be surprised how skill and movement translate from one to the other.

Compounds and traditional bows are quite different in appearance and performance. Using cams, and cables, a compound bow is much more efficient than a longbow or recurve—and much more powerful at the same draw weight.

Compounds are generally easier to shoot proficiently—primarily because of let-off and the use of release aids. It’s these two things that cause the most significant differences in the processes of shooting a compound versus shooting a traditional bow.

Release aids like trigger, thumb-button, and hinges that hook or clip onto a string “D-loop” allow for precise, consistent pressure on the string, and release the string in a very repeatable manner. Recurves and longbows are usually drawn and released with the shooter’s fingers. This can be done very precisely, but it takes more practice. Using a release aid is different from shooting with fingers both in how the string is held and released, but it also changes the shooter’s anchor.

The draw cycle of a compound differs from a traditional bow and requires a slightly different approach. A recurve’s draw weight increases smoothly as the bow is drawn, and the archer rotates their shoulders into alignment as they raise the bow and finish the draw with back muscles. The farther the string is drawn back, the more the draw weight increases. The let-off on a compound causes the peak draw weight to be up-front in the draw cycle, and very low at full-draw. Because of this, compound archers raise the bow, then draw it back with both rotation and back muscles at the same time.

Despite looking completely different, much of the shot is similar or the same—whether you’re shooting a trad bow or the latest flagship compound. The basic mechanics of shooting a bow accurately and properly are the same. After a decade-long break from so much as picking up a compound, I’ve found that the elements of running a good, accurate shot are the same.

Stance and posture are one big similarity. If you switch from shooting a compound to a recurve, you don’t want to automatically start hunching over and short-drawing. A stable stance and solid connection with the ground are important for both—as is your posture. You want your feet shoulder-width apart and slightly open—meaning your hips are pointed slightly toward the target, not perpendicular to it. This gives your upper body room to rotate into alignment and use your back and core muscles to draw.

Although the draw cycle and specific movements for drawing are different from compound to trad bow, you’re using the powerful large muscles in your back and core to draw the bow—not your shoulder. To draw both bows in this method requires core rotation and engagement of back muscles. One of the most common errors in drawing both compounds and trad bows is to use the shoulder muscles to draw and shoot the bow. Often, this can lead to long-term injuries.

The grip angles and shapes usually differ between bow styles, and there is some nuance to the optimal grip for each bow. However, whether shooting a compound or trad bow, many of the principals of a good grip remain steadfast. You don’t want to squeeze the grip of the bow or have the pressure focused on the wrong part of your hand.

A good place to start is to place the web of your hand into the throat of the grip then roll it down onto the grip. The pressure on the grip should be completely on the pad of the thumb, just inside the lifeline. You want a strong skeletal connection to the bow. When pointing at the target, your knuckles should be sloped down at about 45 degrees with your index finger pointing down and resting on the front of the grip. Your thumb should be pointed toward the target and under tension. The pressure should all be on the pad of the thumb.

Some terms in archery are defined differently depending on who’s doing the talking, but as the NTS method of shooting considers it, alignment refers to the relationship between the shoulders and the hand holding the bow. The goal of good alignment is to brace the weight of the bow on the shooter’s skeletal structure by lining up both shoulders and the bow hand in a straight line. The goal of NTS is to achieve that optimal holding position with minimal strain and fatigue on your muscles.

Good alignment is key for shooting both compounds and trad bows consistently. Poor alignment is especially detrimental to recurve and longbow shooters because they’re holding much more weight at full-draw and that strains the muscles more severely. It’s easier to get away with less-ideal alignment when shooting a compound simply because there’s less draw weight and strain for your body to overcome at full-draw. Regardless, good alignment is important, and you will be much more stable, comfortable, and accurate with it.

One of the greatest thieves of accuracy for trad bow shooters is a loss of tension or collapse. What I mean by a loss of tension is that in a holding position at full-draw, as the archer is aiming and about to release the arrow, their muscles relax slightly. Instead of pulling harder on the string, the archer slowly beings to let down. It’s impossible to break the shot with consistent tension when you’re bleeding it—that hurts accuracy.

Compounds are easier to fudge when it comes to shooting with increasing tension. The low holding weight makes it easy for the body to withstand the force of the bow, and many successful shooters simply hold at full draw and manipulate the release with their hand—especially wrist-strap trigger releases. But, I find that I shoot best with increasing tension, just like my recurve.

Generally, the most accurate shots are fired with a subconscious or un-anticipated release, under increasing tension. That increase in tension might not be visible to the naked eye, but it’s important. That’s why you’ll see every Olympic archer increasing tension through their shot, using what’s called expansion to pull the arrow the last couple millimeters through the clicker before releasing.

Read Next: Archery Injuries: Are You Destroying Your Shoulder?

Adding tension through the shot is critical for consistent accuracy with a trad bow, and I find it to be very impactful in my compound shooting as well. Even though with a compound the draw length is consistent, if I’m not activating my release by adding tension (pulling harder) with my back muscles, my accuracy deteriorates—especially at longer distances. I’m quickly finding that one of the easiest sources of inconsistency with a compound is to simply hold at full-draw and activate the release with hand movement, rather than maintain a rigid hand and pull through the release with back tension.

Whether you shoot both compound and traditional bows, you want to switch, or just try one or the other, all these principles carry across. If you’re a good compound shooter, you don’t necessarily need to completely change your form—use the shot process you already have developed to build a repeatable, consistent shot with a trad bow. Good posture, using core rotation and back muscles to draw, achieving good alignment, and adding tension through the shot will help with any bow