A Firsthand Perspective on Wildland Fires in Alaska, and a Tribute to the Few Who Fight Them

Wildfires are an annual occurrence in Alaska, and the crews that stand ready to do battle with that unstoppable force deserve a little more recognition 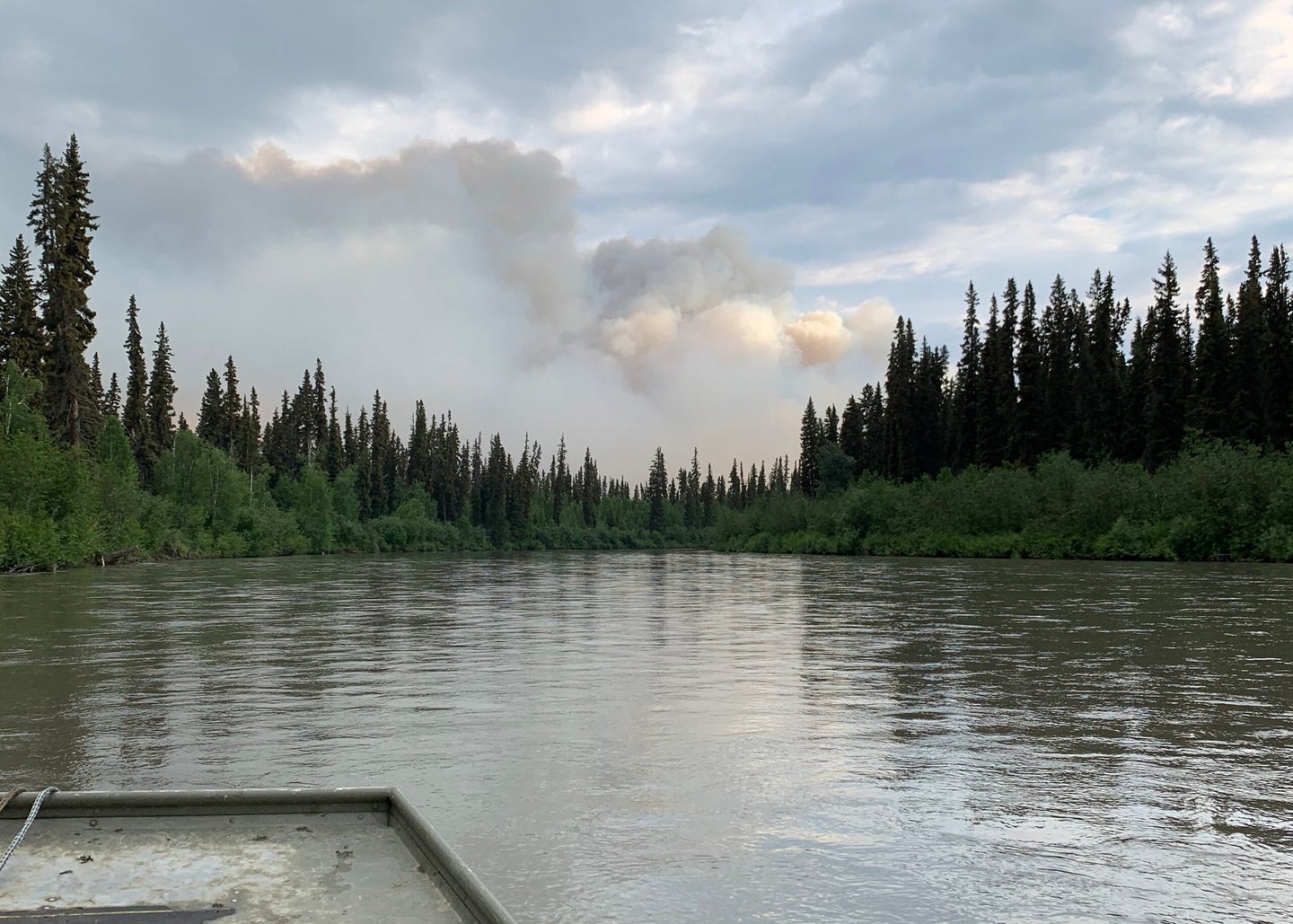 The author takes his boat toward a newly-started wildfire. Tyler Freel
SHARE

Here in Alaska, wildfires burned more than 1 million acres by June 21, which is the earliest recorded date we’ve ever hit that milestone. In interior Alaska, where I live, we see fires every summer, but this year they hit closer to home, or more specifically, closer to a place that held decades of memories.

Thick smoke wafted through the white spruce trees as my buddy and I ferried a small generator and other belongings from my friend Frank’s remote cabin—a cabin that I helped my uncle and aunt build nearly 20 years ago. After retrieving the things that Frank had asked me to, I paced around the cabin nervously. The breeze had just shifted direction, blowing smoke to us.

I pulled a dried stick that my uncle had picked up and tacked to the wall, after saying “I was down on the gravel bar and just thought that I’d never seen a stick so crooked, so I kept it.”

I snatched a nice Eswting camp axe from the shed and looked for anything else we might be able to bring with us and potentially save from the oncoming wildfire. We didn’t dawdle. We didn’t know how much time we had.

Water and retardant tankers blazed overhead as we locked the cabin back up. They were dropping on an actively burning spot less than a half-mile away. I couldn’t see any tree tops torching through the woods, but the heavy smoke indicated that the fire had been very close. With one last look at the cabin that I hoped to see again, we jumped in the boat and turned home.

As we sped down the muddy river, I now worried about the main body of the fire that we had seen burning back to the east of the cabin. Its smoke was now choking the river. The sun bloody and clouded by smoke, I wore my glasses to keep the floating chunks of ash out of my eyes as we raced along. The fire could be on the riverbank already down here, I thought nervously to myself. Fortunately, it wasn’t. The fire had been slowed by a swamp, but it still covered more than a mile in the short time we’d been at the cabin.

By chance, I happened to be on the river within an hour of the fire being reported, so I raced to the cabin. The lightning strike that ignited the blaze was marked on the Alaska state wildfire map as nearly on the property that has so many of my memories.

This fire was attacked by smoke jumpers and tankers within two hours, and additional crews piled onto it in the following days—many of whom were flown in by helicopter. Tragically, one helicopter crashed on Sunday evening (June 25) while landing in the nearby town of Anderson, killing the pilot, 56-year-old Douglas Ritchie of Wasilla. Crews stood down for the night at the terrible news, but had to continue fighting to protect structures and do what they could to mitigate the blaze.

Wildland fires are an annual occurrence across Alaska, and even a two-week stretch of hot, dry weather makes the heavily forested interior where I live a tinderbox. When humidity is low and temperatures are high, fires can be virtually un-stoppable. This summer has been especially dry, with thunderstorms producing thousands of lightning strikes across the state on some days. A look at the state’s wildfire information map shows just how many fires are burning right now.

Since that first night, the fire has exploded in size, threatening many more cabins, and forcing the evacuation of several rural subdivision areas. As I type this, the air outside is chokingly thick with smoke, with pieces of ash wafting to the ground from an even bigger fire that’s threatening numerous homes and cabins to the north of where I live. Just three years ago, we feared our home was in danger from a fire between here and there that burned more than 22,000 acres. I spent many nights that summer standing in the smoke listening to the dulled thwomp thwomp thwomp of Hueys passing back and forth over the house.

Although these fires are a common natural occurrence that’s healthy for the land, they can become a very real danger very quickly. And while I know that fire season can be bad here in Alaska, it’s even more devastating in many parts of the Lower 48, summer after summer.

In some ways, I feel that the wildland firefighter is grossly under-appreciated. Sure, they’re paid well, and we shower them with gratitude when a fire gets too close for comfort, but the danger is always present for them. Whether it’s a Huey pilot pushing the limit on his allowable flight hours, Fire Boss flyboys pouring into the smoke in formation like a string of P-51 mustangs, or Hotshot crews doing backbreaking work in intolerable conditions for the average person, they’re all bringing an incredible amount of skill and determination to a dangerous problem. They could all use a little more thanks.

Even the hottest, smokiest summers always end, and the August rain has most people moving on with their lives. Seen or unseen, wildland fire crews will be out there risking their necks to fight a virtually un-stoppable force of nature in Alaska and protect people and property. Many of these crews travel from the lower 48 just to help fight the fires up here, so thank you. We know what you’re risking, and we deeply appreciate it.