The Six Best Survival Rifles Under $600

A lightweight, packable gun will help you kill your next meal and protect yourself in a survival situation

When you find yourself stranded in a remote stretch of backcountry, any rifle is better than no rifle (assuming you have a box or two of matching ammunition). But if beggars can be choosers, you’d want to bring along the best packable “survival” rifle for your money. You could debate the criteria for what makes a survival rifle a survival rifle all day long, but in my opinion, it’s simply a lightweight, reliable firearm that fends off predators and puts meat in the stew pot.

The Features of a Great Survival Rifle

Whether you’re a hiker or hunter, pilot or prepper, a survival rifle could decide your fate in the middle of nowhere. That said, here are few things you’ll want to consider the next time you’re in the market for a solid survival, or “packable,” firearm, followed by six of my favorites that don’t break the bank.

Reliable
A good survival rifle doesn’t fail you, especially in cold, wet, or icy conditions when food is scarce. It also needs to be built tough. If you’re in a survival situation, there’s always a chance you’ll take some lumps, and knock around or drop your rifle in the process. The good guns are the ones you can toss around and still expect to drive a tack should the need arise.

Lightweight
When you’re in a survival situation and possibly packing all you need to survive, you’ll want to shoulder the least amount of weight possible. Remember, ounces turn to pounds, and pounds turn to pain. If you expect to hold on to a survival rifle during desperate times, the gun needs to be light enough that you’ll happily carry it with you everywhere you go. Lightweight stocks and barrels (which often correlates to small-caliber rounds) certainly help, so my recommendation is to start with rifles that weigh less than five pounds, and common, popular calibers so finding ammunition isn’t a problem.

Accurate
If your survival rifle can’t hit the broad side of a barn, it’s dead weight. Yes, you’ll likely compromise some accuracy with any a bug-out-friendly firearm, but if you practice shooting enough, you’ll learn its nuances for aiming true. Remember, this isn’t a gun you’ll pair with a heavy scope, and it won’t have a long barrel, but that’s alright. In a survival situation, don’t think you’re going to drop a moose at 500 yards with a rifle that folds up into your daypack. You need to put squirrels and rabbits over your cook fire.

Packable
While I’m on the topic of shoving a rifle into your pack, I’ve found folding stocks and take-apart guns suit survival situations best, and that’s what I focused on in my recommendations. If you find a rifle that easily fits into a bug-out bag or bush-plane “ditch kit,” you’re on the right path.

Affordable
At the risk of getting blowback, survival rifles are expendable. As a matter of fact, I’m hard pressed to think of any gear that’s worth losing a life, should push come to shove. That said, don’t spend unreasonable amounts of money on something you may (hopefully) never have to use, and ultimately leave behind. Even with a survival instructor’s enormously huge salary, I still can’t afford (or justify) a rifle that costs as much as a good used car, and I doubt I’m the only one living on a budget. Consider the cost of the firearm itself, the cost of ammunition, whether you’ve needed a survival rifle on past adventures, or expect to need one on future ones, and go from there. 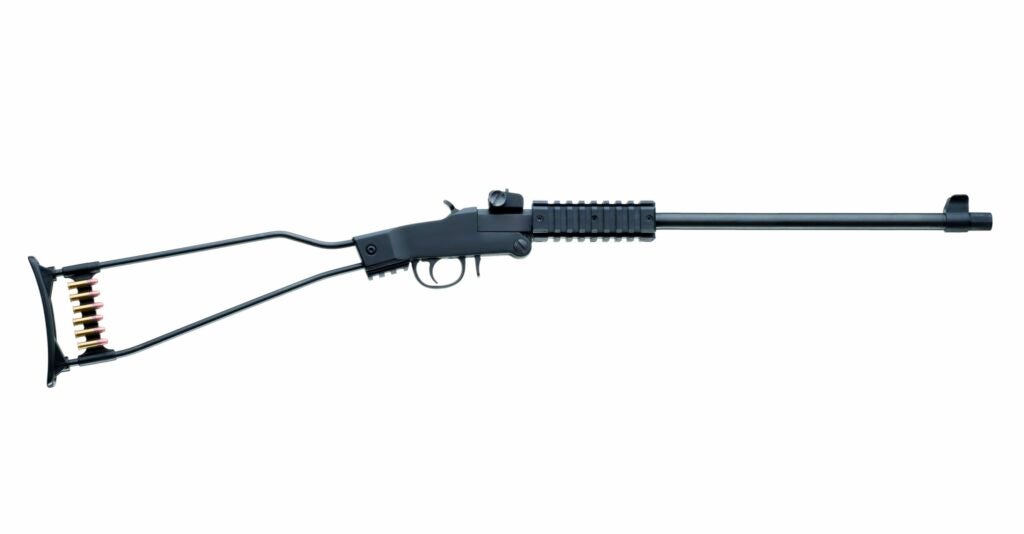 The first gun is not only one of my favorites; it’s the lightest and most affordable rifle on my list–the Chiappa Firearms Little Badger. It’s a lightweight little thing, for sure, weighing in at just under three pounds, thanks in part to the wire frame stock. It packs down into a manageable size too. By simply folding in the stock, the rifle shrinks to 16 ½-inches long, which is perfect for packing away in a small backpack or “go bag.” If you want a plinking gun, these Italian made models come in .22 LR, .17 HMR, or .22 magnum. If you prefer a shotgun, there’s a shotgun version that takes 9mm Flobert rimfire shotgun shells, which technically classifies the Little Badger a “garden gun” among rabbit-blasting farmers.

The simple, single-shot, break-open action is hard to beat, and with four Picatinny rails, you can customize the gun for a specific purpose. Even if you don’t want or need a pack rifle, at this price, you can afford a few to stash away at home, in your vehicle, or anywhere else you might need to make a quick, single shot.

The Little Badger’s skeletonized wire buttstock is easy to customize with a survival theme. Wrap the wire two layers of 550 cord so you have cordage in reserve, and a makeshift shoulder pad for shooting. You could also take off the cartridge holder and secure a larger pouch inside the wire frame to hold ammunition and supplies, and protect your rounds from sand, grit, and weather. Check availability here.

The Marlin 70PSS Takedown Rifle is an updated incarnation of the old Marlin Papoose, a classic “camper” rifle that’s been popular for decades. This new model takes advantage of today’s lightweight polymer materials and the hardy attributes of stainless steel. The 70PSS is a blowback-operated, .22 LR repeater that’s perfect for anyone who travels around or over remote waterways. And while the rifle itself doesn’t float, its padded case has integrated flotation components, which are vital in the event of a watery accident or crash. Designed with the outdoor enthusiast in mind, the 70PSS is tough enough to get knocked around, yet easy to break down for travel or storage (there’s just one barrel nut to remove). Unlike some of the single shot firearms on this list, the Marlin 70PSS features a seven-round, nickel-plated magazine. The 16 ¼-inch long stainless-steel barrel has micro-groove rifling, and you can customize the gun by adding optics to the receiver, or shoot it as is. Check availability here.

Don’t overload the floating case with ammunition and tools if you expect the 70PSS to stay on the top of the water. All you should need is an Allen wrench set anyway, so you can field strip the gun.

The innovators at Kel-Tec have come up with a number of folding guns over the past few years, and while it’s not a true substitute for the beloved AR-15, the Kel-Tec SU16C is chambered in .223 Remington and readily accepts AR-15 magazines. Like other SU16 models, these carbines fold up for both concealment and portability. When packed for storage or transport, the folding stock swings underneath the receiver and latches into place. But this folding gun has two other magic tricks. You can open the forearm to become a bipod, which stabilizes the weapon for long shots. However, the best surprise feature of all, is you can fire the SU16C while it’s still folded. Add a lightweight optic to the rail and this survival gun is ready to go. Check availability here.

Don’t let the 10 round magazines that come with the Kel-Tec SU16C limit your capabilities. Because this gun accommodates nearly any AR-15 magazine, you can carry and use different makes with various capacities.

Would you like to take that squirrel with a scalpel or a hammer? You have that choice with the compact version of the Savage Model 42 Takedown Compact. For many shooting families, small guns like this make a great first firearm for kids because of the short length-of-pull and compact design, but that doesn’t mean this adaptable weapon is just for youngsters. The original Savage Model 42 Takedown weighs in at a little over six pounds, but the Takedown Compact version is only 4.65 pounds. The over/under, break-open gun is unique in that the lower barrel fires .410 shotgun shells, and the upper barrel fires .22 LR cartridges.

The stock and forestock are polymer, which keeps the gun light and durable. You can reach out with the .22 for small game at a distance, or choose your favorite .410 shells with the perfect load for small game, birds, or even self-defense. It’s amazingly easy to stow this weapon when it’s time to move—it breaks down with the push of a single button. The Savage Model 42 Takedown Compact has removable rifle sights, in case you’d like to add a lightweight scope–and the Model 42 includes a handy bag to carry the weapon. Check availability here.

In addition to a supply of .22 cartridges, don’t forget to carry an assortment of .410 shells like bird shot, buck shot, and a few slugs to tackle different prey and troublemakers.

Remember those moments in old western books and movies when the sheriff or an outlaw might have a six-shooter and a rifle that took the same bullets? There’s actually some wisdom in that. The Kel-Tec SUB2000 is a pistol-caliber carbine that is available in a array of variants including Smith and Wesson M&P, Canik, Sig Sauer P226, Beretta 92 & 96, and Glock 17, 19, 22 and 23.

While the SUB2000 has a little more recoil than you might like with heavier loads, the straight blow-back system is reliable, easy to maintain, and simple to field strip. Now I know what you’re thinking—why would anyone consider 9mm or .40 S&W as a hunting round? My response is the 16-inch long barrel on the SUB2000 makes any handgun round act like a whole different beast, and you should have no problem folding any mid-sixed game animal with a blow from a 180-grain .40 S&W load. Check availability here.

Since this rifle is available in so many different variations, buy one that matches your favorite everyday-carry handgun and your magazines should work with both.

Far from a new design, Air Force pilots have used the earliest versions of Henry’s AR-7 survival rifle since the early 1950s, and with good reason. Like its predecessors, the Henry AR-7 Survival Rifle can perform one of the coolest tricks of all the guns on this list. You can disassemble and store this takedown gun inside a watertight stock that displaces enough water to actually float! It doesn’t ride high in the water, but it doesn’t sink, even with ammunition stored inside. Built to hold up in wet conditions, the hollow stock is made of ABS plastic and many of the steel parts are Teflon coated to inhibit rust and corrosion. The Henry AR-7 weighs only 3 ½ pounds and comes in black, True Timber Kanati Camo, and a True Timber Viper Western Camo pattern. It also comes with two eight-round magazines, which also fit into the stock. In less than one minute, you can either assemble or disassemble the entire rifle, with no tools required. In fact, if you needed, you can field strip the entire piece for cleaning in the field, using nothing but your bare hands. Check availability here.

Load it up! This rifle comes with two eight-round magazines, but the stock will hold three, and still float (barely) when all three magazines are full. My advice is to buy a third magazine (sold separately). Making the jump from 16 rounds to 24 is a far better plan than just trying to cram random .22 rounds into the voids of the stock.