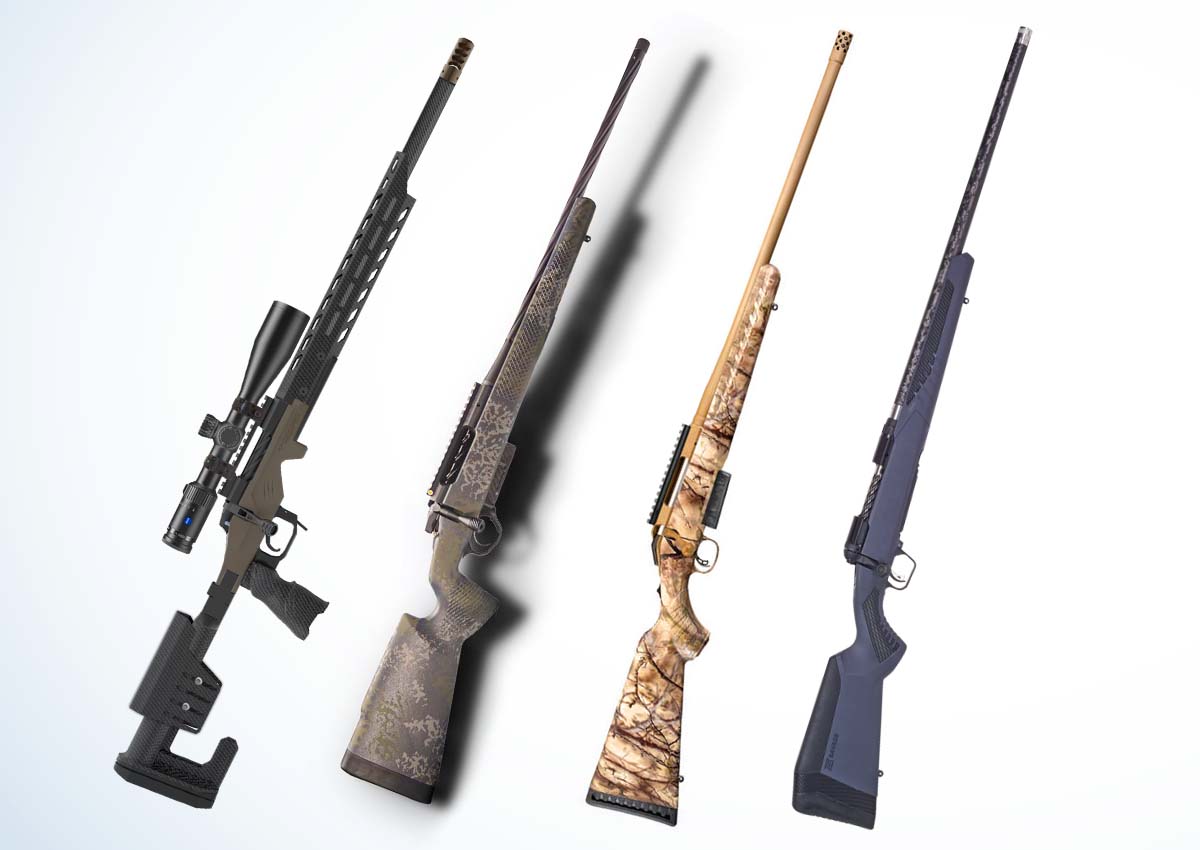 The success of any new cartridge depends partly on gunmakers bringing it into the fold, and the crop of 7mm PRC rifles that will be available this year indicates that things are looking good for the 7mm PRC. My colleague, shooting editor John B. Snow, had some quality time with the new cartridge pre-release and gave us all the juicy details in his review of the 7mm PRC cartridge, when Hornady unveiled it back in October.

If one of your New Year’s goals is to shake that hand tremor that hearing about the 6.5 Creedmoor has given you, you can kick it by getting yourself a rifle in 7mm PRC. Joking aside, the 7mm PRC embraces the principles of modern cartridge design and moves the ball forward with better efficiency and performance. It’s encouraging to see a wide variety of early 7mm PRCs: both high-end, high-priced rifles and normal hunting rifles that most people can afford and use. Here are some of the 7mm PRC rifles you can look for in 2023, and many of these manufacturers offer more than one model in the chambering.

An early adopter of the 7mm PRC cartridge, Mossberg was quick to announce that they are offering their popular Patriot Predator rifle in the new chambering. The Patriot Predator is an excellent and accurate budget rifle that will be a great fit for the cartridge. Chambered in .308, it was “best overall” in our budget rifles test last year, and we have high expectations for the 7mm PRC version.

Two versions of these 7mm PRC rifles will be available initially, one with an FDE-colored stock and blued finish, and the other in True Timber Strata camo with a brown Cerakote finish. The Patriot Predator has a fluted bolt and a flush detachable box magazine that’s easily loaded from the top while seated in the action. It has a sporter-profile 24-inch barrel that’s threaded for a suppressor or muzzle break and comes with a single-piece Picatinny rail for easy optics mounting. MSRP: $519-616

Seekins rifles are excellent performers and full of innovation. We loved the Seekins Havak HIT in 2022 and are excited to see the 7mm PRC rifles that they built in 2023. Another in the Havak line, the Havak Element, should be able to take full advantage of the efficiency of the 7mm PRC cartridge. The Havak Element is one of few long-action rifles with a target-styled stock that will weigh only 6 pounds.

In 7mm PRC, this rifle comes with a 22-inch, mountain hunter contour, fluted barrel that’s threaded for a muzzle brake or suppressor. The sleek two-lug Havak action is fed with a 3-round carbon-fiber detachable magazine and has a nicely fluted bolt. The Seekins carbon composite stock is light but shaped for precision shooting. It has a flat fore-end, a slightly raised comb, and a nice vertical grip with deep fluting. It has a user-adjustable trigger and should be a real shooter. MSRP $2,795

Premium and semi-custom rifle makers are on the ball when it comes to the 7mm PRC, and a hunter will have a hard time finding more accurate 7mm PRC rifles than what Allterra Arms can turn out. Our Shooting Editor John B. Snow has been shooting them hard, and did a full review on the Mountain Shadow Steel chambered in 6.5 PRC this fall. He also shot an Allterra Carbon in 7mm PRC before the cartridge was released and saw five-shot groups that averaged .726-inches; excellent for a 6.75-pound rifle.

The Allterra Mountain Shadow Steel is a precision-manufactured, durable rifle that’s made to withstand the abuse of the most gear-beating sheep hunters and still turn in sub-half-inch three-shot groups. The Mountain Shadow Steel weighs about 6.5 pounds and has a tightly fluted, thin profile steel barrel. The proprietary carbon Allterra stock can be set up with a floorplate or detachable magazine. It has as slender profile, a nice reverse comb, and a small piece of Picatinny rail on the fore-end for bipod mounting. The precision-machined bolt has dual ejectors, a mini-M-16 extractor, and is built for perfect alignment with the bore in lockup. MSRP: Starting at $5,745

The Ruger American is one of the most popular and most accurate budget hunting rifles on the market. It’s offered in a wide variety of calibers and has taken everything from whitetails to Kodiak brown bears. It will likely be one of the most affordable 7mm PRC rifles in 2023, and it will almost certainly be accurate.

Ruger has several variants of the American rifle, and they’re generally all accurate. Even in our .350 Legend rifles test, the American shot lights-out. The American is built around a three-lug short-throw action that’s fed with a detachable magazine. The Go Wild Camo edition is the first one to be chambered in 7mm PRC, and that’s the pattern you’ll see on the stock. The action and barrel have a Burnt Bronze Cerakote finish, and the 24-inch barrel is threaded and capped with a radial muzzle brake. The American has an adjustable trigger, and this model weighs right at 7 pounds. MSRP: $789

Long-range shooting is Gunwerks’ game, so it’s all-but-assumed that they’d be camped out in line to get 7mm PRC rifles into production. One of those rifles is the Nexus. With sharp lines, smart features, and expected accuracy, the Nexus should pair well with this highly efficient round.

Gunwerks has been working on the Nexus for some time, and it features a new NXT aluminum action and new stock design. According to Gunwerks, the vertical grip has been improved, and in-addition to the short section of Picatinny rail for bipod mounting at the end of the fore-end, the bottom of the fore-end has an integrated ARCA rail—something we haven’t seen much of on non-chassis stocks. The stainless-steel carbon-wrapped barrel is threaded and comes with a directional muzzle brake. A key feature on the Nexus is that the barrel is user changeable. As with many Gunwerks rifles, the package can include optics and setup and doesn’t come cheap. MSRP: Starting at $8,809

Though often called accurate, the Savage Model 110 had never been accused of being light; but the M110 Ultralite changed that. I was able to shoot and hunt with a 110 ultralight when they came out, and it’s one of the nicest rifles savage is turning out. Savage was quick to adopt the 7mm PRC, and the 110 Ultralite is a good one to pick from their lineup of 7mm PRC rifles.

The most significant features of the 110 Ultralite are the action and barrel. The action is slimmed up and hollowed out to get rid of excess weight. The Model 110’s stainless-steel receiver is thick, beefy, and had some weight to lose. After machining, it’s given a black Melonite finish. This model, not inconspicuously, features a Proof Research carbon-fiber-wrapped barrel. It’s threaded at the muzzle and includes a thread protector. Naturally, this 7mm PRC features Savage’s Accutrigger and Accustock, which has a stiff fore-end and is adjustable for comb height and length of pull. MSRP: $1,709

Fierce Firearms, based in Redmond, Utah, has been building both premium production and semi-custom hunting rifle packages, and they have earned a strong following. I was very impressed with the CT Rival rifle in .300 Win. Mag. I tested and reviewed last year, and they have several new models for 2023. The MTN Reaper is a streamlined version of their Reaper chassis rifle and will be one of several 7mm PRC rifles that Fierce offers.

The precision machined two-lug action and Fierce C3 carbon-fiber barrel sit in a light magnesium chassis that’s decked with a carbon-fiber free-float M-LOK tube and folding adjustable stock and cheekpiece, as well as an Ergo pistol grip. The rifle includes a NIX muzzle brake and zero-MOA optics rail that can be upgraded to 20-MOA. It has a Bix’n Andy adjustable trigger and uses AccurateMag Detachable magazines. It’s a streamlined platform that should shoot great and weigh a little over 6 pounds in 7mm PRC. MSRP: Starting at $3,399

This year, Proof is adding several 7mm PRC rifles to their lineup. One totally new model is the Ascension. It’s a mountain hunter’s dream; an ultralight, ultra-accurate, and durable hunting rifle that exhibits great attention to detail. It has a Monte-Carlo-style stock with a semi-vertical grip with deep fluting for excellent thumb pad placement. It has a Proof Sendero-contour carbon-fiber match-grade barrel, and boasts a sub-half-MOA accuracy guarantee.

The Ascension is built on a Zermatt Arms titanium receiver with split rail scope bases and a BDL magazine. The bolt has a medium-sized modified-ball handle that’s easy to grab and cycle, but not heavy. The Proof carbon-fiber stock is bedded, and the rifle has a TriggerTech trigger. Multiple colors and patterns are available, and Proof’s rifles typically display excellent fitting and finish work. The 7mm PRC version should weigh about 6 pounds and would make an excellent mountain gun MSRP: $7,699

Christensen Arms released their Ridgeline FFT Titanium in 2022, and I was quick to snap one up. For 2023, they are now chambering the rifle in 7mm PRC, and it should be an accurate, light mountain rifle that you can hunt just about anything with. The Ridgeline FFT Titanium I tested, took sheep hunting, and reviewed was chambered in .308, but the 7MM PRC should make it an even more effective platform.

As with other Christensen Arms rifles, a signature feature on this 7mm PRC is the 22-inch stainless-steel carbon-wrapped barrel. It’s threaded on the end and comes with a side-baffle brake. The most notable features of the FFT Titanium rifles are the Cerakote-finished titanium actions, and the FFT (Flash Forged Technology) carbon parts. The FFT parts, most-visibly the stock, are made with carbon fiber that’s fused in a way that looks like OSB plywood, with small flakes layered over one another and fused. The stock has a foam core with bedding pillars and is wrapped in this FFT carbon. The magazine bottom plate and bolt knob are also made with FFT carbon. The short-action rifles start at 4.8 pounds, but the 7mm PRC in a long action will likely weigh a touch over 5 pounds. As with their other rifles, this one comes with a 3-shot MOA accuracy guarantee. MSRP: $3,399