The Beginner’s Guide to Spearfishing 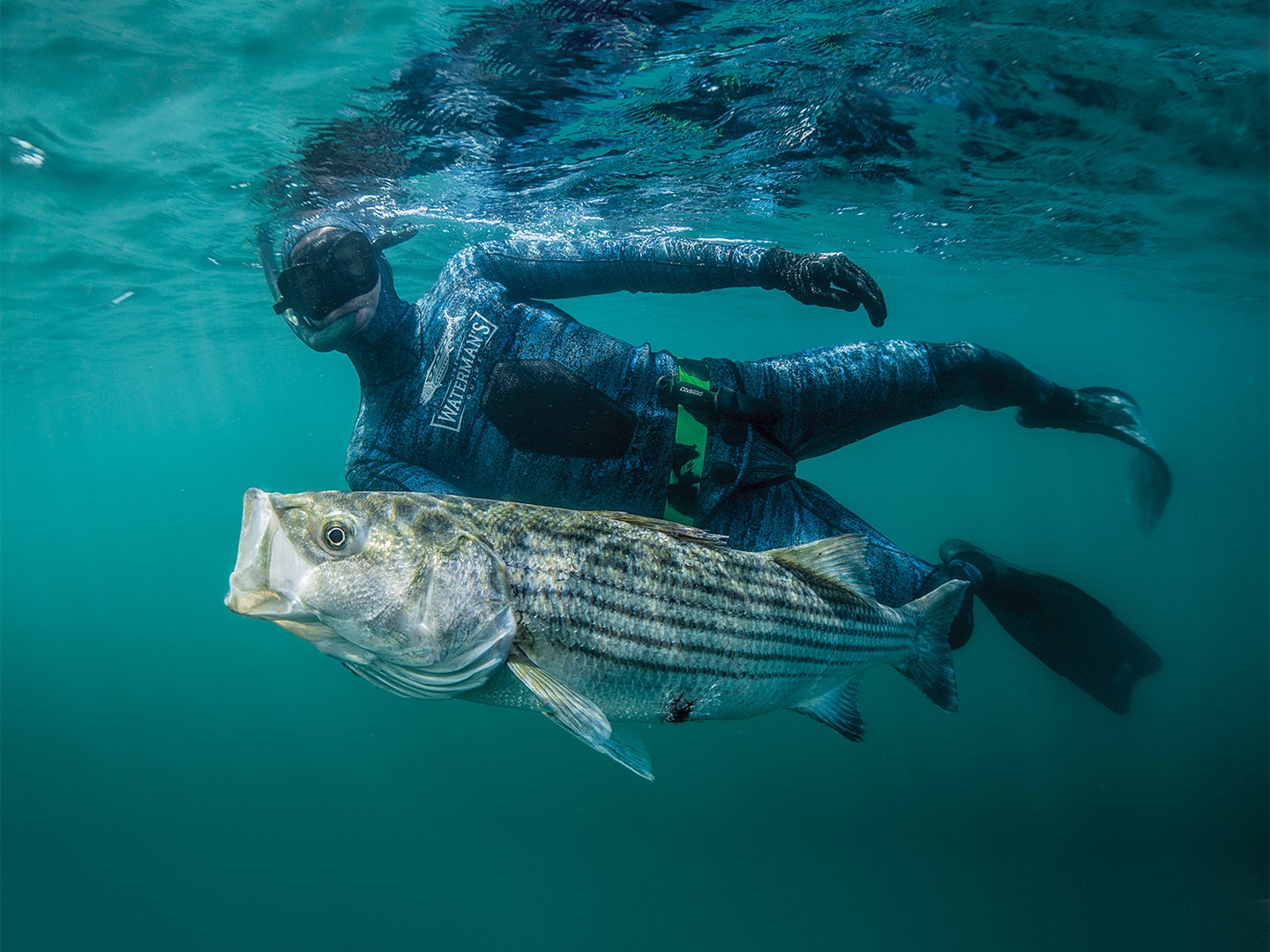 A successful spearfisherman kicks to the surface with a hefty striper. peter correale
SHARE

I still remember the first fish I speared like you remember your first deer. As I broke through a murky surface layer of river water into the blue gulf water beneath, I was greeted by two amberjacks swimming straight toward me. I aimed carefully and shot the closer AJ just behind the head. It rolled over as my spear shaft hit it. Just as I was about to start celebrating, the fish righted itself and surged toward the bottom, with me in tow. I was able to straddle the thrashing fish, grasping the shaft on either side of its head like handlebars on a motor­cycle, and eventually subdued it with my dive knife.

Spearfishing has been around since man first sharpened a stick and dove below the surface. But getting started can be intimidating. There are many components to it, but all of us were new to the sport at one time. These basics will help you get in the game.

There are two primary methods: free diving and scuba diving.

Free diving is done with a mask and snorkel only. The spearfisherman dives and returns to the surface while holding a single breath of air. Free diving offers the advantage of simplicity with no formal training and much less equipment. The free diver is able to move through the water much more easily, and there are no bubbles or regulator noises to spook fish. This is usually the preferred method for fishing shallow waters or targeting pelagic species, which are particularly sensitive to noise. It’s also the quickest and simplest way to enter the sport. All you really need is a mask, some fins, a spear, a knife, and a buddy (more on this later).

Scuba diving involves carrying an air supply beneath the surface in a tank. It requires certification classes and a lot of equipment. The extra gear makes an outing more complicated (and also significantly more expensive). Scuba diving, of course, offers the advantage of access to greater depths because you’re not limited to one breath. And because you don’t have to go back up for air immediately after a fish is speared, you can follow it and subdue it more quickly.

Scuba diving adds the danger of decompression illness (also known as “the bends”). This condition is caused by a buildup of excess nitrogen in the body from breathing pressurized air at depth. Proper training and following protocol during dives will prevent this from happening.

The simplest type of spear gun is a pole spear. The modern version consists of a fiberglass pole with a threaded tip, which allows different spear heads to be attached depending on the type of fish you’re targeting and the environment you’re fishing. Attached to the back of the pole spear is a band of surgical tubing. Cock the pole spear by stretching this rubber band forward and grasping the spear shaft. Then point the pole spear at the target and release the shaft, causing it to shoot forward. The Hawaiian sling is an improvement on the pole spear design, using a band attached to a tube. The tube is placed over the shaft, and the spearfisherman holds on to the tube and releases the spear. It acts like an underwater bow and arrow.

Spear guns have a trigger and either a track or a barrel to guide the shaft along the length of the gun. There are two common versions: pneumatic guns, which use air pressure, and band guns, which use rubber bands made of heavy surgical tubing to propel the spear. Pneumatic guns are much quicker to load, but tend to lose power at greater depths. They are primarily used in freshwater lakes and shallow waters with limited visibility because of their lower power and generally smaller size. Band guns do not lose power regardless of depth, and they are the gun of choice for most spearfishermen. Bands are easy to replace, and these guns will shoot with only one band if necessary.

Spear guns come in a wide array of lengths, and it is important to match the size of the spear gun to the visibility of the water you will be diving in. Longer guns offer an advantage in clearer water, where you can take farther shots. When the gun is longer, the tip of the spear starts much closer to the target. However, in water with limited visibility, a long gun is a huge disadvantage. You don’t want the tip of the gun to reach beyond your visibility. Plus, a longer gun is also much harder to swing on moving fish.

Read Next: Spearfishing for the Gray Ghosts of Southern California

Spear shafts are generally made of spring steel to help prevent bending, and they come in a variety of thicknesses. Spears can either be free shafted (no line attached at all), attached directly to the spear gun with a line (Spectra, heavy monofilament, or braided steel cable), attached to a reel mounted to the spear gun, or attached to a float rig that prevents the fish dragging it underwater and allows the diver to retrieve both the fish and the spear.

There are also a wide variety of spear tips available. Here’s where a good local dive shop is invaluable. They can help recommend the best shaft, tip, and method of shaft attachment for any given spearfishing situation (especially for waters in your area). The right recommendations will save you both time and money spent learning which gear works (or doesn’t work) the hard way.

Spearfishing is essentially hunting underwater. In order to become proficient at this sport, as with hunting on land, it is important to understand both the habits and the habitat of your target species. Each species of fish spends a majority of its time in different areas and at different depths. Most species view a spearfisherman as a large predator, so it’s not as easy as just swimming up to them and pulling the trigger. Learning to stalk fish and get within an effective range of them requires a lot of hands-on knowledge.

One common cause of fish spooking is the bubbles that are exhaled by a diver using scuba gear. Another is the vibrations emitted by the diver’s fins as the diver kicks to move toward the target fish. Fish have a lateral line filled with nerve endings to detect noises and vibrations made by both predators and prey. Much as a whitetail deer trusts its nose when it comes to detecting danger, fish react immediately and without question to any strong vibrations they feel. While it is never good to hold your breath when breathing pressurized air at depth, gliding down from above the fish while slowly exhaling to prevent loud noises is a deadly technique. Gliding eliminates the vibrations from fin kick, and a slow exhalation is much stealthier than rapid breathing. You can also use cover (such as depth changes or rock outcroppings) to hide your approach.

Spend some time learning to dive before adding the complications of spearfishing to the equation. Once you begin to carry a spear gun, an experienced dive partner and mentor will shorten the learning curve and help ensure a safe dive. Many areas of the country have spearfishing clubs that recruit new divers into the sport and provide tips and advice. For free divers, companies such as Benthic Ocean Sports in Destin, Florida, provide excellent training in techniques and safety.

Remember, you are entering an alien world when you venture beneath the water’s surface, and things can go wrong quickly. Nothing replaces proper training when it comes to surviving a dangerous situation in the water.

Always use the buddy system when spearfishing. A buddy can help if you become disoriented or entangled, and (for free divers) can watch from the surface as you dive down to shoot fish. Every year, several free divers die from shallow water blackout, a condition that occurs when someone ascends from a deep dive but doesn’t quite make it to the surface, resulting in a lack of oxygen to the brain. Such deaths are easily prevented by a buddy watching from the surface, ready to help. Besides, like any sport, spearfishing is much more enjoyable when you have someone to share the experience with. Comparing notes after a dive is always fun, and divers can work together to push fish toward each other.

Regulations for spearfishing vary widely, so be sure to check your local laws before you ­begin. Consult a dive shop or dive club and then get started. You’ll never forget that first fish.