How to Spear the Biggest Pike of your Life

Big northerns are about to gather in bays and harbors of Michigan’s Great Lakes. Be there to meet them—with a spear 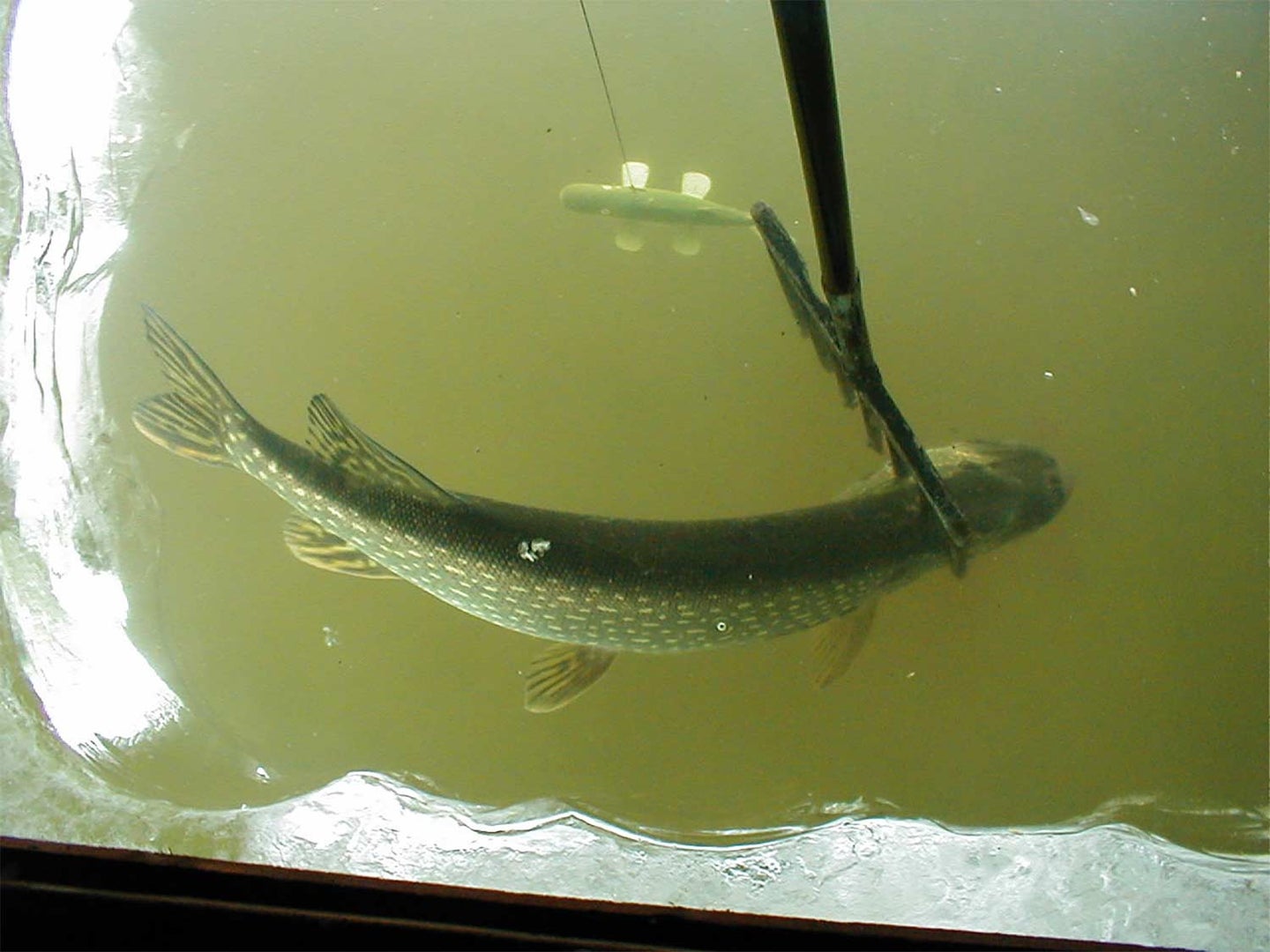 This pike was lured to the spear with a brightly colored perch decoy. Richard P. Smith
SHARE

I first attempted to spear northern pike through the ice with a buddy of mine who had a touch more familiarity with the winter sport than I did. He had been out once or twice in a shack with a spear, both of which were borrowed from a friend. It was neat having a fish-tank-like window into what was happening underwater by way of the large hole we laboriously chopped through the ice, and it was exciting when a large pike swam into that hole.

Truth be known, my buddy missed the pike; not once, but three times. Whenever he worked the decoy after retrieving the trident, the pike came back. Talk about thrilling action. That experience whet my appetite for more. Since then, I’ve learned that some of the largest pike ever taken in Michigan were speared from the Great Lakes waters of the Wolverine State.

The official state record northern pike for Michigan is a huge fish that was 51.5 inches in length and weighed 39 pounds. It was speared through the ice on Dodge Lake in the Upper Peninsula’s Schoolcraft County during the winter of 1961. The unofficial state record is a monster 49-pounder of unknown length that was skewered on Lake Superior’s Huron Bay during the winter of 1955 by father and son Ben and Don Pickard from L’anse. The Pickards speared two more enormous pike from Huron Bay that same year, one of which equaled the weight of the current state record. The other was a pound lighter.

Huron Bay and other protected waters of the Great Lakes are still home to eye-popping pike. Most, if not all, bays, harbors, and marinas of Lakes Superior, Michigan, Huron, and Erie harbor northerns, some of which would rank as the biggest ever for many spearers.

Lifelong spearer and retired conservation officer Mike Holmes, 72, from Iron Mountain, Michigan nailed his biggest pike ever on January 8, 2020 on protected waters of Lake Michigan. That fish was 46 inches in length and weighed 21.6 pounds. And he said he saw another one he wasn’t able to get a shot at that he estimated at 50 inches.

Prime locations to set up for spearing pike, according to Holmes, are along the edges of weed beds and on drop-offs where northerns cruise for baitfish. He often scouts for pike spearing locations on open water from a boat, using Polaroid sunglasses and a depth finder to pinpoint structure. Lake maps can be valuable for locating structure, too. He added that the location of weed beds can change on an annual basis on the Great Lakes, so preseason scouting is important every year. Weed beds are usually in 12 to 15 feet of water, but can be shallower. The same is true for dropoffs.

Holmes says pike tend to be most active during approaching storm fronts as the barometric pressure is dropping. Keep this in mind when planning trips on the ice. By the same token, you may not want to be caught on the ice during a winter storm, so keep your safety in mind when trying to take advantage of changes in the weather. After the weather clears from a storm can be good times to connect on northerns, too.

As a general rule, northern pike are most active early and late in the day, but they can be cruising for prey at any time. Plenty of winter pike have been speared or hooked during late morning through early afternoon.

The minimum size limit for northern pike on most waters in Michigan is 24 inches, with a two-fish limit. Holmes said you may not see many pike during a day of spearing on protected waters of the Great Lakes, but the ones you see are normally bigger than average, with many ranging from 28 to 38 inches long, but others grow much bigger.

Two Days on the Ice

Last winter, I spent two days with Holmes in his spearing shack on Lake Michigan waters, hoping he might get a crack at that 50-incher, and we saw two pike the first morning about 30 minutes apart. We were in 16 foot of water and the first fish came in along the bottom. Its depth gave that northern, which Mike estimated at 36 to 38 inches, enough time to dodge the spear. The second fish was closer. He scored on that one which taped 29 inches.

We didn’t see another northern during the next six hours. On the second day, we didn’t to see a single pike during five hours in the shack.

Spearing pike in Michigan is legal from December 1 through March 15. The Michigan Darkhouse Angling Association (Holmes is the long-time president) is responsible for securing equal seasons for fishermen using spears as well as other ice fishing gear. Note that some lakes where ice fishing for pike with hook and line is legal remain off limits to spearing. Note, too, that safe ice on Great Lakes bays often forms much later than inland lakes, and that was especially true during December of 2019 due to a two-week warm spell. So always check ice thickness to make sure it’s safe before venturing far from shore and continue to check the ice as you go.

It is not legal to spear pike through the ice in Wisconsin. A spear fishing license is required in Minnesota and slot size limits are in effect on some lakes. A regular fishing license is all you need to spear in Michigan. Be sure to check local regulations for spearing because they vary by state.

Decoys are Crucial to Success

Baitfish decoys are a critical piece of gear for the spearing crowd. Tethered dekes are dropped into the hole in the ice and jigged by the angler to lure pike below. As a decoy carver, Holmes always has a variety of decoys on hand that mimic smelt, suckers, herring, whitefish, perch, bluegills, shiners, and trout. He frequently changes decoys to try to find one that will be most appealing to the predator fish. He changes decoys every half hour or so, if he hasn’t had any action.

The decoy Holmes was using when he got the 46-incher was shaped like pike prey, but more brightly colored. While active decoys can lure pike into view, Mike knew an old-timer who never moved his decoy and the guy stuck plenty of big pike. He simply sat patiently watching the decoy until a curious pike came into view and then speared it.

Spoons and Live Bait Work, Too

Flashy spoons can also be used to lure hungry northern pike to a hole. I’ve hooked pike under the ice with Little Cleos and Swedish Pimples, so I know they work, but any type of spoon that imitates an injured baitfish can do the trick. If you’ve got a treble hook on the spoon and a pike grabs the spoon before you are able to spear it, you may be able to hook it and reel it in. Spoons should be attached to a rod and reel, of course.

Some pike spearers incorporate live bait such as large sucker minnows, on another line as an added attractant. Spearers who prefer to use their spear on pike, use a clip instead of a treble hook to attach baitfish to a line. When using both a decoy and live bait to attract pike to a spearing shanty, it’s important to make sure the decoy doesn’t get tangled in the bait line.

Since up to three lines can be used at a time for ice fishing in Michigan, some anglers put two tip-ups near their shanty and add bait to a rod and reel in their spearing shack for the third line.

Read Next: A Recipe for Pan-Roasted Pike Fillets with Bacon and Tomato Ragu

How to Throw a Pike Spear

Holmes uses a 6-foot long custom-made spear on pike. He bought it for $450, but spears can be purchased for as little as $50. The business end of Mike’s spear is weighted and it has a wooden handle. The handle acts like fletching on an arrow, so the spear flies straight when thrown.

When you see a pike you want to spear, it’s important to slide the spear into the water quietly without splashing. Take aim before thrusting the spear downward. If you try to throw a spear before it’s in the water, the resulting splash will spook pike, allowing most of them to escape.

The rectangular whole, measuring 3×6 feet, is cut with a spud. Once the hole is cut, Holmes pushes the large piece of ice under the ice to get it out of the way. He then uses a landing net to scoop any remaining pieces of ice out of the hole. Since the hole is so large, he marks it with branches when he moves his shack as a warning to anyone who might be walking or snowmobiling on the ice.

To be even more mobile, many fishermen spear from portable tents or shelters. Propane heaters help provide comfort on the coldest of winter days.

Spearing northern pike through the ice is a mesmerizing experience that’s not unlike watching a big screen TV as you stare at the action beneath your feet. If you are in the right place at the right time and do the right things, you can lure pike onto that screen to show their stuff. One of them could be the biggest northern you’ve ever seen.