The Ruger Mark IV Tactical: A Tactical Twist on a Classic .22 Pistol

The most prolific .22 pistol in history gets a tactical makeover 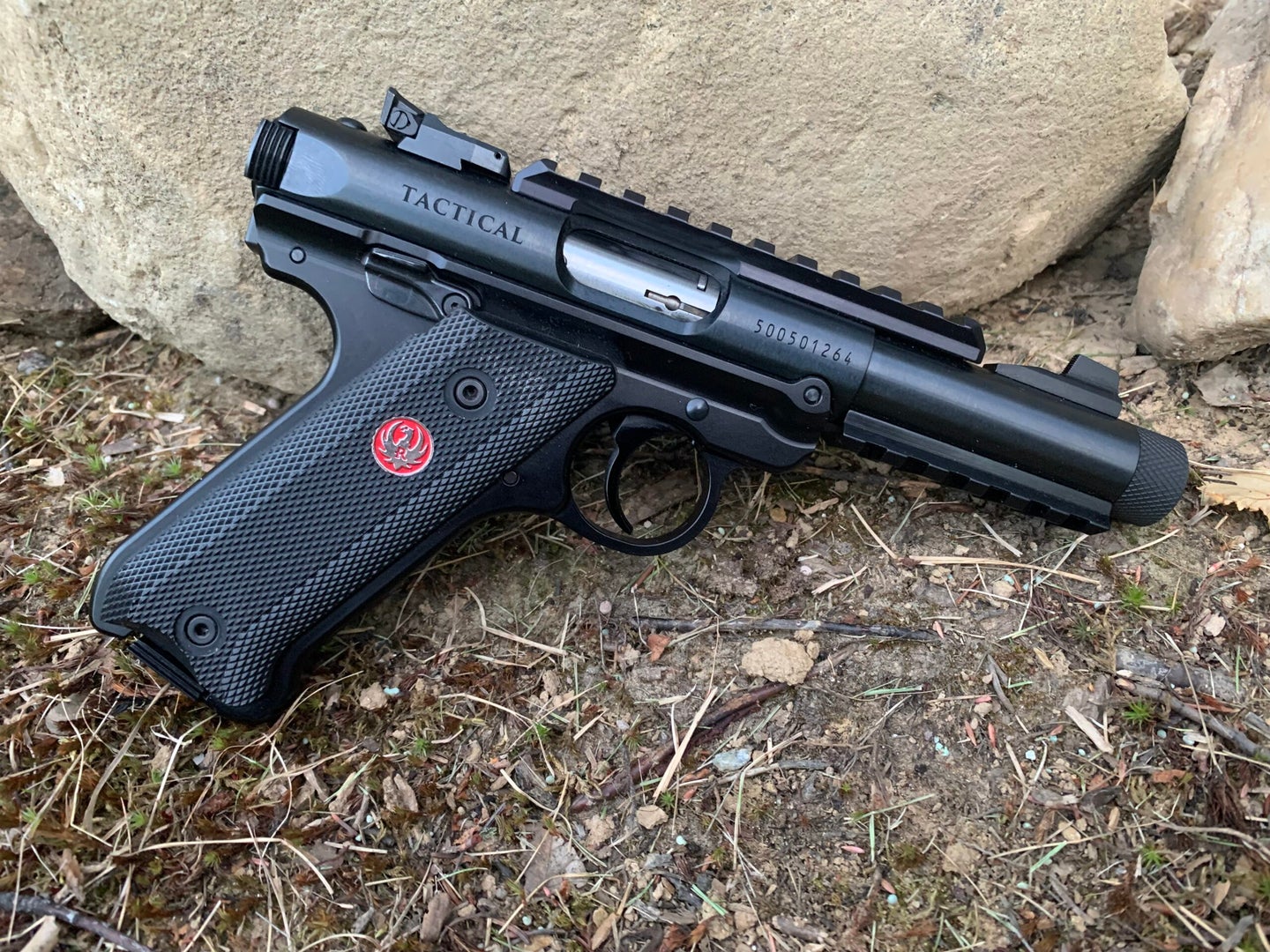 The tough thing about reviewing a .22 pistol like the Ruger Mark IV Tactical is deciding what to compare it to. As if it were a self-fulfilling prophecy, the gun that started it all for Bill Ruger back in 1949—the Standard Model—has become the standard against which all other .22 pistols are measured. The Mark IV—Ruger’s present-day model of the classic design—continues to carry the colors forward into the 21st century.

The Ruger Mark IV Tactical is one of several currently produced variations that maintains the Nambu-like profile and feel of the original Standard model. It sports a heavy-profile barrel with a threaded muzzle and has aluminum accessory rails attached to the bottom of the barrel and running the distance between the front and rear sights atop the receiver and barrel.

In the case of the Ruger Mark IV Tactical, you can take “tactical” to mean “ready to accessorize.” Although the Mark series of pistols is rumored to have seen combat with quiet professionals, in dark places on moonless nights (or has it?), the .22 pistol of .22 pistols isn’t an optimal fighting weapon.

Whether you want a hush puppy home defense pistol, a solution for nighttime pests on the back forty, or the coolest plinking pistol imaginable, the Mark IV Tactical is ready for you to dress up to your heart’s content.

In a nutshell, the Ruger Mark IV Tactical is a heavy-barreled Mark IV with a threaded muzzle and accessory rails attached to it. The Mark IV has quite a few updates from the original Standard Model, but the heart of it is still there. The Mark IV Tactical is a .22 pistol with heft—something you’ll notice the instant you pick one up. It’s a pistol that feels like a real pistol—when so many contemporary .22 pistols feel uncharacteristically light for handguns of their size.

The pistol that put Ruger into business was inspired by the Japanese Nambu of World War II, and today’s Mark IV Tactical has those same lines and function. It’s a recoil-operated semi-automatic that’s fed by a slender 10-round single-stack magazine. Rather than a slide and frame, the pistol features a tubular receiver that sits atop the frame. A reciprocating bolt assembly is inside the receiver and uses a captive recoil spring on the assembly itself. The bolt is operated by pulling two tabs that protrude from the back of the receiver to the rear.

This design has been optimized over the years but maintains the basic feel and function that made it so popular. Many Mark models have featured heavy barrels, and aftermarket integrally suppressed upper receiver/barrel assemblies have been around awhile. The Mark IV is an excellent and quiet platform for a suppressor, and no 21st Century pistol is complete without a tactical flashlight and a red dot. The burly rails on the Ruger Mark IV Tactical will allow you to mount just about any light or red dot optic you can find.

The universal calling card of .22 LR ammo is that it’s filthy, and one of the most-notable characteristics of the Ruger Mark IV is that disassembly and cleaning are very easy. Wax lubrication and powder fouling will find their way into every nook and cranny of a .22 pistol—and eventually cause reliability issues in the best of them.

To disassemble the Ruger Mark IV Tactical, you simply close the bolt, remove the magazine, place the pistol on “safe,” and press a button underneath the rear of the bolt. The receiver/barrel assembly will rotate and lift off the frame without the need for any tools. Then simply pull the bolt assembly to the rear and free of the receiver. This allows for quick and easy cleaning of the receiver and chamber-to-muzzle cleaning with no hassle. Re-assembly is just as simple.

The recoil spring assembly, firing pin, and extractor can easily be removed from the bolt and cleaned. The generally closed-off receiver doesn’t allow much fouling down into the trigger and hammer mechanisms. The internal hammer assembly sits near the rear of the frame, and the hammer travels upward through a slot in the rear of the bolt assembly to contact the firing pin—not altogether unlike how an AR-15’s hammer strikes the firing pin.

The classic Nambu-like feel of the Ruger Mark IV is intoxicating. The pistol’s weight and grip shape have an intrinsic balance of robustness and finesse, and there’s no .22 pistol that feels quite like it. Its ergonomic qualities have won over the hearts and cash of shooters for decades, and I feel it too.

The Mark IV Tactical points intuitively and is a pleasure to shoot one-handed. A more contemporary two-handed shooting style and grip doesn’t feel quite as natural. The grip is dramatically pitched forward, and if you thought you had to point “downhill” with a Glock pistol, just wait till you get ahold of one of these. It’s not an insurmountable discomfort, but—as many pistols of the period were designed—the original design of this pistol line was likely drawn up with one-handed operation in-mind. Later Ruger Mark IV 22/45 models changed the frame to a mimic the grip of a full-size 1911.

When handling and shooting the Ruger Mark IV Tactical with a contemporary stacked-thumbs grip, I sometimes found myself accidentally engaging the safety lever on the right side of the pistol. Someone at Ruger must have encountered this too because the right-side switch is removable. The Mark IV is set up to cater to right-handed shooters for the time being. The bolt catch lever and magazine catch button on the left side of the frame and are non-reversible. All the controls on the Mark IV Tactical were crisp and clean to operate, but the bolt catch lever on my sample has an annoying jiggle when it’s not engaged.

The trigger on my Mark IV has a crisp single-action break at 3 pounds, 9 ounces with a bit of soft travel before it picks up the weight. The trigger’s reset is tactile, but there’s not much spring pressure to drive the trigger forward to the reset, so you’ll need to move that trigger finger forward yourself rather than simply relax it and let the trigger push it back to the reset.

The slim single-stack magazines that the Ruger Mark IV tactical uses haven’t changed much in 75 years. They are high-quality and function well, but you’ll likely tire of reloading them if you’re doing any high-volume shooting. The 10-round capacity is rapidly becoming antiquated, and the absence of a magwell makes fast reloads tedious—the original certainly wasn’t designed with such things in-mind.

The Ruger Mark series has a well-deserved reputation for its accuracy, especially with its target models. The stiff bull-profile barrel is heavy and nearly an inch in diameter. That and the general heft of the pistol make it easy to shoot accurately. The iron sights that come on the Mark IV Tactical are adjustable for windage and elevation but aren’t especially precise. They’re simple and robust—blued finish with ribbing on the back surfaces of both front and rear. These sights aren’t really meant to shoot in the local bullseye league though—they’re designed to be durable. Besides, if the optic rail didn’t clue you in, anyone buying this pistol has a red dot in-mind. Still, the sights can be swapped out for something that suits your taste if you prefer.

I had a fine time shooting steel plates out to 25 yards with the iron sights, but adding an Athlon Midas TSR1 red dot made holding much tighter groups a cinch. Accuracy seemed to vary slightly by ammo, but it generally shot everything well. It made for great target transition practice plinking on a staggered set of 6-inch Spoiler Alert targets.

If there’s a drawback to the Ruger Mark IV Tactical’s optics rail, it’s overdone. You could probably—no, definitely—mount a riflescope on it. I like the robustness, but it makes sight acquisition a little tougher than necessary. With a rail-clamp mount, any red dot you mount will sit high above the bore. This makes it slower and more difficult to acquire the dot in the sight window. The light rail has the same issue. I like the flexibility of being able to fit any light on there, but it’s a bit over-done in my opinion. The pistol could be slicked-up by ditching the rail and designing a lower-profile optics-mounting plate—ideally with co-witnessing sights.

The Ruger Mark series is quite literally the standard for reliable .22 pistols, and I’m pleased to say that it functioned every bit as well as I expected. I fired approximately 1,500 rounds through the pistol—mostly suppressed. Through testing about a dozen different types of ammunition, I found that high-velocity loads cycled exceptionally well with and without a suppressor. I had occasional stovepipe stoppages with subsonic ammo without a suppressor.

The pistol required cleaning a few times during testing—typically every few hundred rounds. No .22 pistol is immune to the grime and fouling that the cartridge produces, and after 300 rounds or so, I’d begin to have stovepipe stoppages or light primer strikes. Fouling accumulating inside the receiver can slow down the bolt just enough to fail to eject a spent case free. That grime accumulating around the firing pin can also slow it enough that it won’t reliably hit the case rim hard enough to ignite the priming compound.

I found that shooting with a suppressor required more-frequent cleaning—about 150 round intervals—as the pressure from the can forces more powder fouling back into the receiver. With that additional pressure however, the Ruger Mark IV Tactical cycled subsonic loads reliably at an utterly hushed sound level. As soon as I’d hit a malfunction due to fouling, I’d clean the pistol. With a quick field-strip and swab-out of the bore, receiver, bolt, and some oil got me back in business quickly.

What the Ruger Mark IV Tactical Does Best

The classic feel and weight of the Mark IV Tactical stay true to the pistol’s roots and make it a pleasure to shoot, but its accessory compatibility keeps it relevant. It is an excellent host for a suppressor and being light-and-optics-ready is even better. It’s simple to operate, maintain, and it still maintains the standard for .22 pistols.

Where the Ruger Mark IV Tactical Could Use Improvement

The biggest way that the Mark IV Tactical could be improved is to streamline the optics mounting on the pistol and ditch the tall mounting rail. The versatility of a big rail can be nice, but it makes for more-difficult sight acquisition.

The Mark IV Tactical is a high-quality, robust pistol that is at the top of its class. There’s a reason that these pistols are still going strong after 75 years—a good design that’s been constantly refined. If you’re looking for that classic Ruger Mark feel and performance, but want to put a can, light, and optic on it, then this one will be worth your money.