The 8 Best Hunting Guns that Double as Self-Defense Firearms 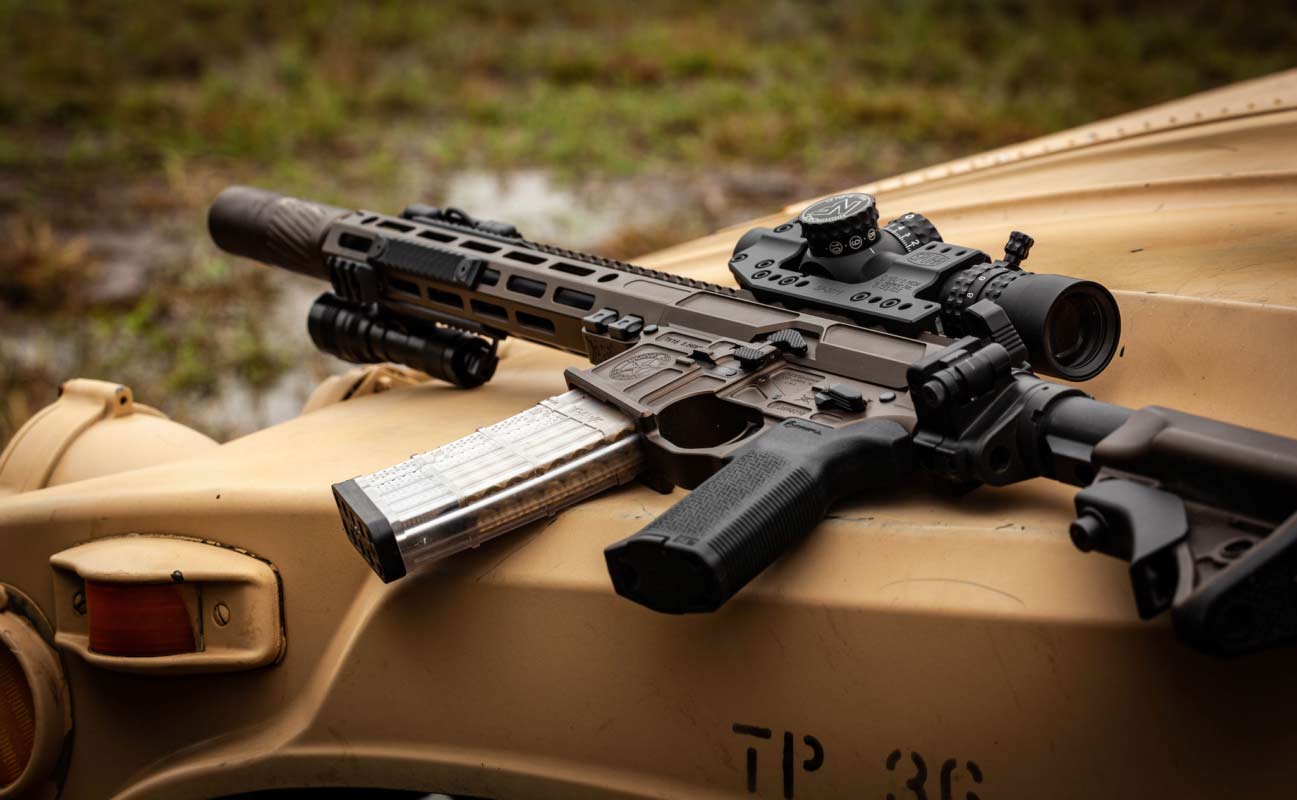 It’s tough to match the versatility of an AR-15. Lone Star Armory
SHARE

Most people don’t need a reminder that the world isn’t always a safe place to live, and the topic of self-defense is as relevant as ever. Although seasoned shooters and outdoorsmen and women tend to roll our eyes at the sudden realization by many that having a gun for protection might not be a bad idea, they need direction and good information. Even among our salty ranks, self-defense continues to be a hot topic alway up for debate.

Most of us are either shooters or hunters—sometimes both. A shooter may not have any interest in hunting, but loves guns and shooting, and will tend to gravitate towards selecting more tactical-style guns for self-defense applications. Hunters who are also passionate shooters will often go the same route, preferring a purpose-built gun for each intended task. I would say that the majority of folks fall into a hunting and general use category. Most are working with a budget and frankly don’t need enough guns to arm a platoon. They just want a reliable gun to hunt with, but that can also fill the important role of self-defense. Each person’s needs are unique, and one of these eight guns will do the job for both hunting and self-defense.

Lever-action rifles may seem antiquated, but for some folks, they offer a great combination of hunting aptitude and self-defense effectiveness. The X Model from Henry takes their proven action and adds a bit of a tactical flair with synthetic furniture, a short rail at the end of the fore-end, and a threaded muzzle. Muzzle brakes or a suppressor can be easily added, and even for a camp rifle, being able to easily attach a light is a well-thought-out attribute. It’s a short, handy rifle that can be operated quickly and maneuvered well in tight spaces and cycled very quickly. Your caliber selection will depend on your needs. If you’re dealing with lots of bears as well as two-legged threats, the .45-70 will be the way to go. Otherwise, the .357 or .44 mag options offer plenty of power for hunting deer, and offer increased magazine capacity. Not to mention that the increased barrel length will give you better performance than a handgun will, with mild to little recoil. MSRP: $970

With its roots based in the original BAR designed by John Browning, the sporting versions of the semi-automatic BAR have been proven for decades. This version, which comes in .308, features an 18-inch barrel, detachable box magazine, synthetic furniture, and built-in Weaver/Picatinny rail for optic mounting. The virtues of the .308 chambering need no explaining, and it’s versatility as both a medium to big game (as well as self-defense rifle) is hard to beat. This rifle would be at home in a deer stand, survival pack, and seat of the truck with a red dot on it. MSRP: $1,500

The pump-action 12-gauge is one of the most versatile platforms that exists today. They are affordable, modular, and there are several very reliable models available. The Winchester SXP is a no-frills work horse, and an extremely fast-cycling pump gun. With a bit of backwards pressure on the forend, heavy loads almost feel like they eject themselves, allowing for very fast follow-up shots. Several iterations are available, but get any SXP, and you can get wing-shooting barrels, slug barrels, and shorter, self-defense style barrels. The receiver is also tapped to mount a Picatinny rail for an optic. I’ve used one for a couple of years and found it to be very reliable, and it also seems to cycle the newer mini-shells with No. 4 buckshot flawlessly without any modification, making for a great close-range defense option. MSRP: $400

As far as bolt-actions are concerned, if there ever was an ideal all-around hunting, survival, and self-defense production rifle, it is the Scout from Ruger. It’s short—with either 16-inch or 18-inch barrels—handy—it’s controlled-feed action is ultra-reliable—and the detachable box magazine allows for increased capacity as well as the option for faster reloading. The rifle comes equipped with stout iron peep and blade sights, as well as an integrated rail forward of the action for mounting optics. If being offered in .308 wasn’t enough, it’s now also made in .450 Bushmaster and .350 Legend, making it something to consider if you live in a straight-wall deer state and want a mild-recoiling but effective self-defense round. MSRP: $1,139-$1,199

Read Next: Why the 10mm Is the Ultimate Handgun Cartridge for Hunting and Personal Defense

If this seems a little vague, it is only because there are a plethora of fantastic options available today, and you don’t need to get hung up on just one AR. Although it is the contemporary “tactical” rifle, the AR-15 platform is fantastic for both hunting and self-defense. My favorite is the TX15, made by Lone Star Armory, but you don’t need to get totally hung up on the manufacturer to get a good rifle, instead, think of the features you will want. Any standard AR-15 carbine will come with a collapsible stock and flat-top receiver for mounting optics. If possible, try to pick one with a high-quality barrel, and a float tube with some options for accessorizing should you desire. M-Lok hand guards tend to be smooth and low-profile but give you lots of options. You’ll want a true 16-inch barrel so you’re not dealing with a pinned flash suppressor and can use a sound suppressor if you like. These rifles are pretty straightforward and most of them shoot well. They make fantastic coyote and medium-sized game rifles, and need I say more about the self-defense options? MSRP: $2,221-$3,578 (TX15)

The big brother to the AR-15 is the class of ARs that utilize cartridges in the .308 size range. A bigger cartridge means a bigger, longer receiver, so what I like about the MSR 10 is that Savage was able to shorten the receiver to give you the same overall length as a normal AR-15 receiver, but using the larger cartridges and magazines. It comes in .308, .338 Federal, and 6.5 Creedmoor, with either 16-inch or 18-inch barrels, depending on the caliber. It also features a collapsible stock, adjustable gas system, and full-length top rail. It’s a great option for someone who wants a larger caliber AR without sacrificing modularity or ease of handling. Even in 6.5 Creedmoor, it uses standard .308 AR magazines which are typically plentiful. MSRP: $1,551

The resurgence in popularity of the 10mm cartridge has led to it becoming a proven backcountry defense handgun cartridge, and has also proven effective for hunting big game. You can’t expect to get rifle results, but it delivers adequate performance with much less recoil than many magnum handguns. There are other platforms available, but for reliability, capacity, and modularity, the Glock G40 is hard to beat for a hunting application. It is essentially the longer-barreled version of the commonly carried G20. That longer barrel will give you a touch more velocity and accuracy, as well as smooth out the recoil a bit. If not available on the shelf, any shop worth their salt can ready a G40 to accept a red-dot sight, a great benefit for hunting or self-defense. Although the G40, and even G20 are on the large side for concealed-carry, they are a great option for self-defense where practical. The 10mm is available in a wide variety of loads and these days ammunition is plentiful. MSRP: $700

If you’re looking for a handgun you can hunt small game with, but can also use for self-defense, don’t settle right away for another .22LR handgun. The Ruger-57 adds to a narrow field of 5.7x28mm pistols. The 5.7 isn’t a powerhouse, but it gives you significantly more punch than the average .22, and is somewhat comparable to the .22 mag ballistically. You’ll be able to put down medium-sized pests with a bit more authority, but also have a viable self-defense gun. The two biggest attributes that this offering brings to the table are the high capacity (20+1) and lack of recoil for more sensitive shooters. The pistol is like butter to shoot, is a more practical option than something like the .380 ACP. MSRP: $799