The Best New Hunting, Target, and Self-Defense Ammunition of 2021

Someday ammo will find its way back to store shelves. When it does, these are the best new rifle, shotgun, and handgun loads you can buy 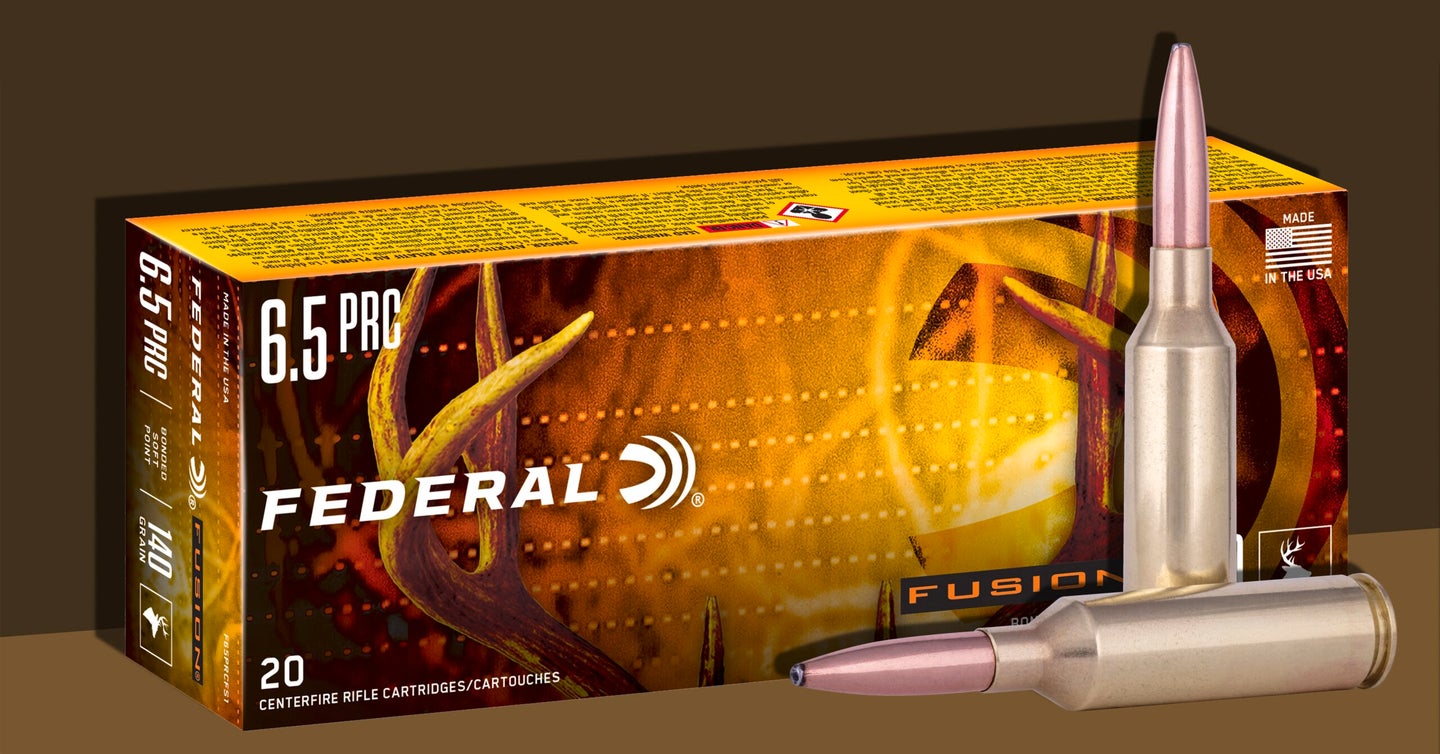 The Federal Fusion in 6.5 PRC is just one of the new ammo offerings for 2021. Federal
SHARE

Rolling into 2021, ammunition manufacturers are operating at full steam to catch up with the consumer run on ammo, but they are also still hard at work developing new loads. There are some great new ammunition offerings this year that will hopefully be hitting the shelves sooner rather than later. Here’s a round up of the best new rifle, shotgun, and handgun loads being introduced this year.

The 350 Legend is quickly becoming an established deer cartridge, especially in areas that only allow straight-wall rounds. And now there’s starting to be a healthy variety of ammunition options for the cartridge, too. The Deer Season XP Copper Impact fires a 150-grain monolithic copper “extreme point” bullet at an advertised 2300 fps. The bullet is designed to give rapid and consistent expansion with maximum weight retention and deep penetration. This one should be a winner in the deer woods.

As the 350 Legend continues to rise in popularity, it’s commonly being chambered in AR platforms and it is increasingly viable as a multi-purpose and defense cartridge. The new 350 Legend chambering in the Defender line features a 160-grain bonded, protected hollow point, at a velocity of 2225 fps. The load is designed specifically with modern sporting rifles in mind, and the cases are nickel-plated to aid in smooth functioning. The bonded PHP is also supposed to help with smooth cycling, and is designed for weight-retention, but also rapid and dramatic expansion. With the large bullet diameter for its length, this load should yield a big energy dump with optimal penetration.

Federal’s Fusion ammo will now be available in 6.5 PRC, shooting a 140-grain bullet. The Fusion offerings are typically great ammo for the price, and the line was designed with the deer hunter in mind. The 6.5 PRC offers a flat trajectory and great accuracy, and the Fusion bullet features a molecular bonding of the jacket and core, aiding in weight retention, but a skived bullet tip to aid in consistent expansion.

These three new line extensions with the Swift Scirocco II bullet offer increased performance and versatility for both the popular straight-wall cartridges, the 350 Legend (170-grain) and 450 Bushmaster (250-grain), as well as the 224 Valkyrie (81-grain). The Scirocco is a polymer-tipped, bonded bullet with great B.C.s, and a tapered jacket to help it expand rapidly at lower velocities, but not come apart at close range. It will be a hammer in the slower, larger-diameter straight-wall cartridges, and will give hunters even better performance in straight-wall deer seasons. It should also bring good penetration and performance in the ultra-fast Valkyrie.

Highlighting their new cartridge, the 6.8 Western, the new Long Range Pro Hunter from Browning features a high-B.C. Tipped Sierra Game King bullet. This load will be offered in several common calibers from 6.5 Creedmoor and PRC, to .270 Win, to .308, .30-06, and .300 Win Mag. The Highlight of the line, however, is the 6.8 Western, which is loaded with a 175 grain Tipped Game King (breaking into new territory for the .270 class of rifles.) The bullet has great ballistics and sectional density, and gives good expansion, but also great penetration and weight retention. It’s advertised at 2835fps (which I found to be accurate), and produces more energy than standard 6.5 PRC loads, and edges out most standard 7mm Rem Mag loads (at long ranges), with a pretty mild-recoiling, true short-action cartridge. Winchester is also making loads for this new cartridge loading a 165-grain Accubond Long Range bullet with an advertised muzzle velocity of 2970 fps and a G1 BC of .620. Read a full review on the 6.8 Western cartridge here.

Developed for military applications, and for maximizing the potential of the relatively small action length and size of the AR-15 platform, the 6mm ARC hits way outside it’s weight class. This versatility and shootability gives it a wide range of suitable applications for hunters and shooters, and the new Precision Hunter line extension from Hornady takes advantage of that. This 6mm ARC offering is paired with a 103-grain ELD-X bullet and should perform well with this cartridge.

Like in their Honey Badger line, Black Hills Ammo worked with Lehigh Defense to develop what they’re calling their Dual Performance offerings. This will initially be in .308 (152-grain, 2800 fps) and 5.56mm (62-grain, 3000 fps). It brings another great option to the monolithic, non-lead bullet market. The bullet is machined from copper, with a fairly wide hollow-point to facilitate rapid expansion at a wide variety of velocities, creating a dramatic wound-channel, but with a solid base that will continue to penetrate. With Black Hills’s reputation for consistency, this one should be a winner.

Long known for their absolute dedication to precision, Black Hills is now producing 460-round ammo cans of their MK 262 MOD 1C 5.56mm ammunition. They developed it as a precision ammunition for the U.S. Navy, and it utilizes a 77-grain match bullet pushed at 2750 fps. Along with each can is the documentation for the testing that goes into these loads. The folks at Black Hills stress consistency and accuracy, and they prove it. Ammunition from each lot is fired in 10-shot groups at 300 yards, and if it fails to group under 2 inches, the lot doesn’t ship.

Read Next: The New 6.8 Western Is a Versatile Big-Game Hunting and Long-Range Shooting Cartridge from Browning and Winchester

Michigan-based BOSS Shotshells shook up the duck-hunting world in 2018 when it introduced its quality bismuth loads as a direct-to-consumer business. This year BOSS has two interesting new products that are all about shooting smarter, not harder. The BOSS Lite-12 is lower-pressure load that delivers a 1-oz. payload at an advertised 1350 fps muzzle velocity. According to BOSS, the Lite-12 measures just 9500 psi in a 2¾-inch chambering. This is a sweet spot for smaller-framed shooters or folks who just don’t want to deal with heavy recoil. It could also be a great option for hunters who own classic old guns and might be concerned about recoil damaging a vintage stock. This load will be available in non-toxic, copper-plated bismuth No. 5s and should be deadly on birds inside 40 yards when matched with a proper choke. Veteran hunters know that at close ranges, it’s good patterns and precise shooting that kills birds.

BOSS’ other introduction for 2021 is the LP-FiberWad. The “LP” stands for low pressure (7500 psi), but the most interesting aspect of this new shotshell is the wad. It’s made from paper and is 99 percent biodegradable. So when you pick up your spent hulls, you’re really only leaving behind bootprints, and hopefully a few scattered feathers. It will be available this year in 2¾-inch 12 gauge and 16 gauge, and 3-inch 20 gauge in copper-plated bismuth No. 3s, 5s, and 7s. —Alex Robinson

Winchester is meeting the rise in popularity of .410 turkey guns with its Double X Diamond Grade load. It’s loaded with ¾-oz. of 7½ shot, pushing out of the muzzle at 1100 fps. This load utilizes 8 percent antimony and copper-plated shot for dense patterns, putting an advertised 20 percent more pellets in a 20-inch circle at 30 yards than standard lead shot. It’s designed to be harder and much more uniformly round than standard shot, which aids in tight packing and reducing flyers.

As an answer to the resurgence of the 16 gauge for upland hunters, this new addition to Winchester’s Super X line is a No. 6 upland load of non-toxic steel, suitable for areas where non-toxic shot is required. This load is fairly straightforward, but it does feature thicker wad segments for increased barrel protection with the harder shot.

This new line of waterfowl shotshells utilizes a combination of different-sized, ultra-round bismuth and steel combined to give an optimal pattern density downrange. It will come in one 20-gauge load, and a variety of 12-gauge loads, up to 3½-inch mag options. The payload is 30 percent bismuth by weight and the bismuth is stacked over the steel, utilizing Browning’s BXD wad for consistency at extended ranges.

Federal is adding steel options to its upland shotshell lines, with two new offerings in 12 gauge. Both are 2¾-inch loads, but are packed with 1 oz. of 6 or 7½, high-quality steel shot, which is a requirement in some hunting areas. You’ll get Federal’s consistent reliability at a price of $12.99, which makes it much more reasonable for upland and dove hunting than many other non-toxic options available.

Turkey loads can be serious business, and Federal’s custom shop worked with legendary choke tube designer Rob Roberts Custom gunworks to cook up a load with No. 9 Tungsten Super Shot for optimal velocity and pattern density. You’ll find a 20-gauge 3-inch load with 1¾ oz. of shot and the 12-gauge 3-inch load, which has 2 oz. of shot. The advantage of TSS is that it’s 22 percent denser than regular tungsten, 56 percent denser than lead, and brings double the pellet count of No. 5 lead shot of the same weight.

Defensive handgun ammunition is getting better and better, and this year, Winchester is bringing the USA Ready Defense line, with offerings in .40 S&W, .45 ACP, and 9mm Luger +P. The key feature of this load is the Hex-Vent insert. The bullet is a jacketed hollow-point with an insert that does two key things. First, it prevents the hollow point from clogging or improperly deforming; and second, it aids in proper expansion. What you end up with is perfectly uniform and rapid expansion, maximum terminal performance, and optimal penetration for a defensive handgun. Specific ballistics are tracked by individual lot for consistency, and you’ll find these loads in 170 grain in 40 S&W, 200 grain in .45 ACP, and 124 Grain in 9mm Luger +P.

Browning is moving its defensive handgun ammo technology forward with the X-Point Defense line. The load’s “X-Point” insert prevents the hollow point from clogging which often results in lopsided expansion, but it also acts as a catalyst to drive rapid expansion of the bullet for a quick energy transfer. It will be offered in common chamberings from .380 ACP through 10mm Auto, but popular loads are sure to be the 147-grain 9mm load, as well as the 180-grain 10mm Auto load for everyday carry.

Most of us don’t think about a .22LR as a self-defense gun, but there certainly applications where it can be a great fit. Federal is zeroing in on those applications with it’s .22 LR Punch Personal Defense load, which is designed for smooth functioning and maximum velocity and penetration, especially out of short-barreled handguns. It uses a new 29-grain nickel-plated, lead-core bullet and a nickel-plated case, which should get 1070 fps out of a 2-inch barreled handgun and 1760 fps out of a 24-inch rifle barrel. If you keep a .22 under the seat of your truck or a stinger on your ankle, this should be a great option once it becomes available.

Black Hills ammo has seen great success with its HoneyBadger line of defense ammo. Unlike traditional hollow-point bullets, which can be sensitive to barriers, this ammunition uses monolithic, machined copper bullets with flutes cut out of the front. The small impact surface area and solid bullet should give incredible penetration, and the flutes produce a fluid turbulence and wound cavity similar to that of a hollowpoint. This .357 Magnum offering is new for 2021 and features a 127-grain bullet at a muzzle velocity of 1365 from a 6″ barrel (higher in a carbine-length barrel).