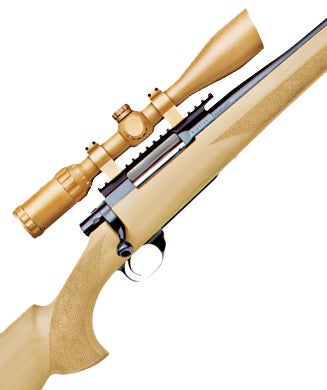 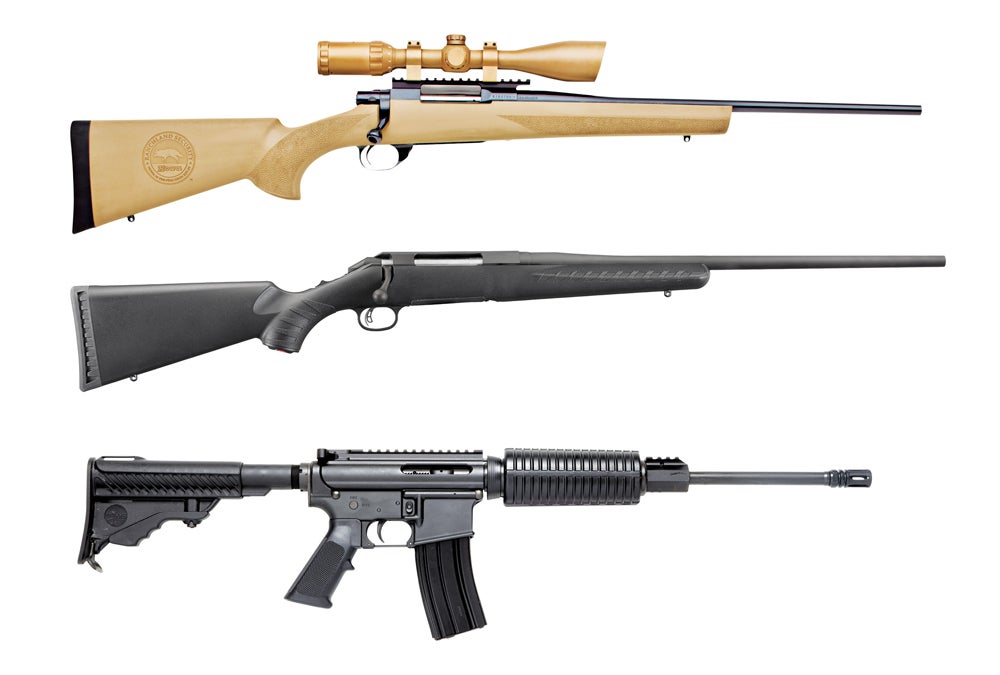 A good coyote gun can come in a variety of shapes, sizes, and calibers. In this gallery we round up 12 of the best ARs, bolt rifles, shotguns and rimfires for any coyote hunting scenario.

Predator hunting is becoming a popular pastime for those who aren’t quite ready to leave the woods when deer season ends. And, given their rapidly expanding populations and destructive habits, coyotes are the most popular quarry.

It doesn’t take a big wallet to get in on the action, and depending upon where you hunt, there are a number of different firearms that can be very effective. Here’s how hunters can get into the game without breaking the bank.

The Savage Axis bolt action (MSRP: $363- $375) is available in .223 Rem, .22-250 Rem, and .243 Win. Regardless of where one hunts, those are coyote downing calibers. It is also available in true right-hand or left-hand actions at the same MSRP, which should endear it to southpaws.

Drilled and tapped for scope mounts, the 22-inch carbon steel barrel and synthetic stock are finished in a soft black matte, and the empty gun weighs in at a trim 6.5-pounds. Fed from a four-round detachable box magazine, the .223 Remington model features a 1-9 twist barrel that will handle 40 to 75 grain bullets.

The .22 centerfires are perfect for most coyote chores, but they come up short on the open and windy Western plains. For these conditions, The Ruger American in .243 Win (MSRP: $449) is an excellent solution.

This lightweight bolt action tips the scales at 6.5-pounds. The 22-inch barrel and synthetic stock are black matte finished. The trigger is user adjustable for a light and crisp let off, and the gun feeds from a four-round detachable magazine. Optics are easily mounted with Ruger’s integral ring system, and scope rings are included with the gun. 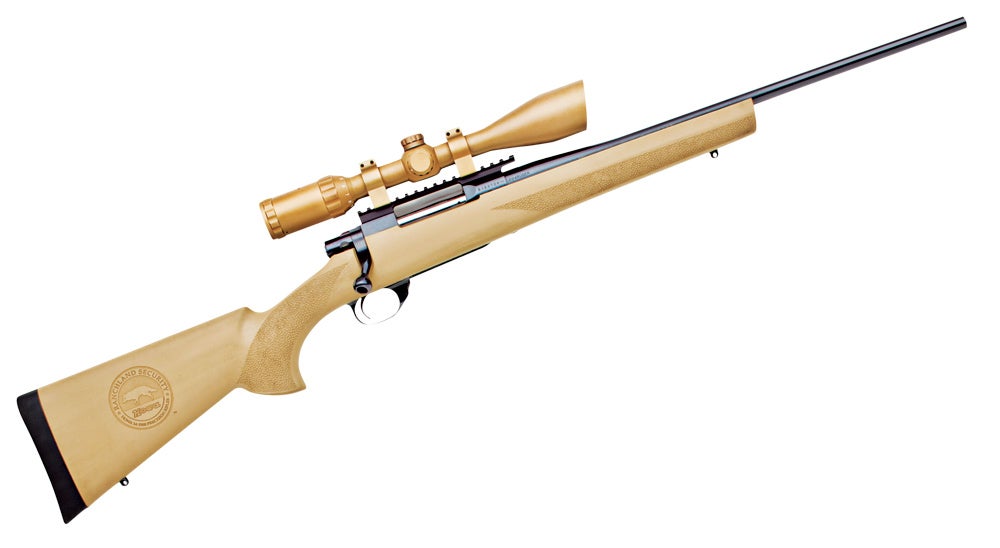 This Howa 1500 bolt action is equipped with a Hogue Overmolded stock.

This Howa 1500 bolt action is equipped with a Hogue Overmolded stock (MSRP: $558.00). Designed as a compact rifle for tight quarters, it makes a handy and very maneuverable truck rifle that is equally at home in the confines of a blind. It features a lightweight 20-inch #1 contour barrel barrel, two-stage match trigger, and a 13.87-inch length of pull.

Although it is designed for law enforcement tactical applications, the new Model 700 SPS Tactical has some intriguing possibilities for serious coyote hunters. Built on the proven Remington 700 bolt action, it features a 16.5-inch heavy barrel that should make it a very maneuverable gun from concealed positions when calling predators, yet provide the accuracy needed for lengthy shots. A Hogue Ghillie Green Overmolded stock and matte finished metal work won’t spook coyotes, and the X-Mark Pro externally adjustable trigger (factory set at 3.5-pounds) aids in accurate shot placement. Optics mounting is easy. With a MSRP of $833, it doesn’t exactly fit into the ‘budget rifle’ range, but there is a plus.

Available in .223 Rem, .300 AAC Blackout, and .308 Win (magazine capacity is four or five, depending upon caliber) the barrel is factory threaded to accept a suppressor. Some coyote removal operations can require a discreet presence, and a suppressor may be indicated. If a suppressor is not required, the threads will accept muzzle brakes or flash hiders. This compact bolt action has an overall length of 36.25-inches, and an empty weight of 7.25-pounds. ––Chris Christian

The XPR, $619, is Winchester’s new workhorse, designed and manufactured to be both accurate and affordable. It’s a no-frills rifle, but in my experience, shoots right up there with rifles that are much more expensive. Coyote hunters might be disappointed to see they aren’t offered in many of the smaller calibers, but one of these rifles in .243 Win or 6.5 creedmoor would not only be a great coyote rifle, but suitable for big game as well. Threaded to accept a suppressor, this is a great option for someone who needs flexibility out of their rifle. ––Tyler Freel

The hot set-up among professional coyote hunters is a AR-15 (Modern Sporting Rifle) with a variable power scope.

The hot set-up among professional coyote hunters is a AR-15 (Modern Sporting Rifle) with a variable power scope. Few coyotes can escape the accuracy and magazine capacity offered by the MSR and those opting for scopes in the 2.5×10 or 3×9 power range are well equipped for close range calling shots, or can reach out to more than 400 yards.

The DPMS Sportical ($719) is chambered for 5.56mm/.223 Rem and features a 16-inch barrel, standard AR controls, collapsible/adjustable length buttstock, and a lightweight forend that trims the empty weight to 6.3-pounds. It is a flat top A4 design that allows a low bore axis scope mount. It accepts all Mil-Spec AR-15/M-16 magazines, and its 1-9 twist barrel is ideal for coyote loads in the 40 to 75 grain weight.

With a MSRP of $699, the DT Sport OR is another ‘wallet-friendly’

With a MSRP of $699, the DT Sport OR is another ‘wallet-friendly’ MSR chambered for 5.56mm/.223 Rem. It features a 16-inch barrel with a 1-9 twist rate, Mil Spec forged 7075 T6 hard anodized lower receiver, and a six-position adjustable M4 buttstock. Empty weight is 5.6-pounds, and it accepts all Mil-Spec AR-15 magazines.

The upper unit is an A3 configuration, with a standard A2 front sight and a Picatinny rail on the receiver. This allows a lot of sight options. The rail allows for the quick mounting of scopes or reflex/red dot sights for coyote hunting, yet they can be quickly replaced with a detachable A2 ‘carry handle’ sight that returns the gun to a compact iron-sighted carbine for home defense. It’s a versatile gun. ––Chris Christian

Despite not having some of the fancier “varmint” features, this carbine, $752, would make a fine coyote rifle at a much lower price than many varmint-specific models. You’ll get the standard AR features you expect, an adjustable buttstock, optics-ready pic rail, carbine-length M-Lock handguard, and a threaded muzzle. It also features QD sling swivel attachment points. The 1 in 9” twist will spin any varmint bullet just fine, and with a medium-power optic, or even red dot/scope combo, this would be a fine calling rifle. ––Tyler Freel

In the thick cover that many Eastern coyote hunters face, a lot of shots on called coyotes will be under 50-yards; sometimes well under. In that terrain, a shotgun is an excellent choice. It will take them down, and does little pelt damage. When it comes to picking a smoothbore, look no further than a good turkey gun. They are designed to be highly maneuverable and deliver tight and accurate patterns while the shooter is snuggled down into cramped cover. This new Stoeger shotgun fills the bill at a MSRP of $649.

It features a 24-inch barrel that is threaded for interchangeable choke tubes. Supplied tubes are IC, M and XFT (Extra Full Turkey). With the loads favored by coyote hunters, a Modified choke often produces the best patterns. The synthetic full stocked, full pistol gripped, shotgun is a recoil-operated action, chambered for 12-gauge 2 3/4-inch or 3-inch shells with a magazine capacity four-rounds. The entire gun is covered in a non-glare camo finish with an empty weight of approximately 7.5-pounds. The barrel is equipped with a red bar front bead, but the receiver is also drilled and tapped to accept any scope, reflex, or red dot optical sight. ––Chris Christian

A shotgun is something many coyote-callers have and even prefer over rifles for certain situations. For affordability and reliability, it’s hard to beat a pump. The SXP, $499, is a solid shotgun, and perfect for both the duck blind and slinging heavy coyote loads.

With the durable camouflage finish, invector-plus chokes, fiber optic front sight, sling studs, and 3 ½” chamber, you have a calling-ready scattergun at a very affordable price, that’s also suitable for just about any other of your shotgun needs. ––Tyler Freel

The economical rimfire cartridge family also plays a role in coyote control, and the .22 Magnum is a staple among farmers and ranchers. A better bet, however, is the 17 HMR. With a muzzle velocity of over 2,500 fps it has a flatter trajectory, less wind drift, and the power to deal with coyotes to at least 150 yards with wallet-friendly rimfire loads. The Henry Varmint Express .17 HMR (MSRP: $549.95) was designed to do just that.

If you’re shopping for a rimfire for coyotes, you should be considering the hot-shooting 17 WSM, and a rifle that was designed specifically for that cartridge is one not to overlook. Although on the light end of the spectrum for coyotes, being right up with the centerfire .17 Hornet, the WSM is a fantastic option, especially if you also hunt smaller fur like fox and bobcats, but need a rifle that’s capable on coyotes.

Featuring a heavy varmint barrel and Savage’s accutrigger, it’s sure to be a shooter right out of the box, and, with a $405 price tag, it brings an exceptional value to the table. ––Tyler Freel