How To Challenge Big Bucks With a Deer Decoy 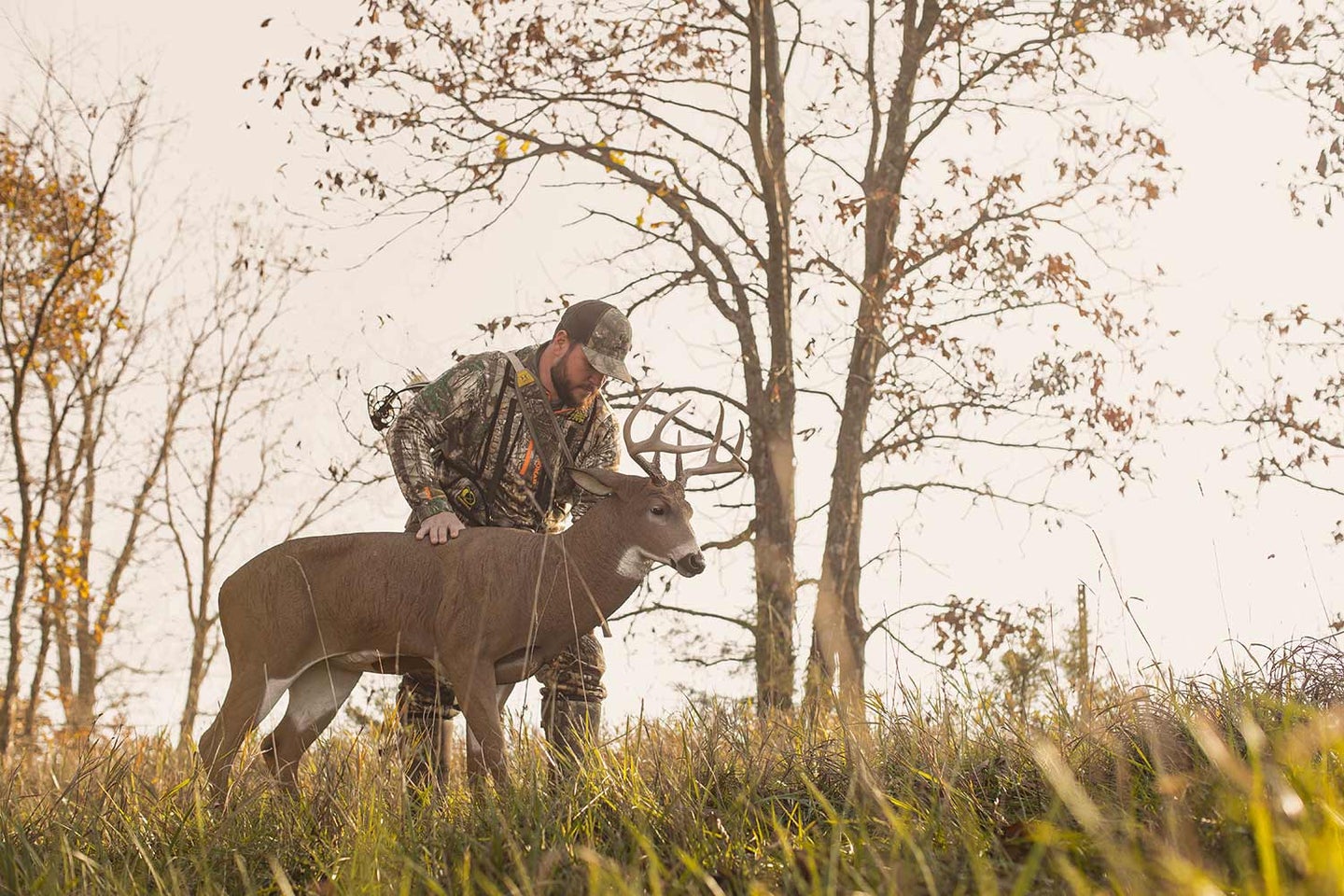 How many times have you been in a treestand, seen a shooter buck in the distance and thought, “man, I hope that deer comes my way?” If the answer is never, you’re a dang liar. All of us have been in that scenario. And if you are a new deer hunter, you soon will be. The buck you’ve been watching on trail cams for months steps out of the timber with a group of does and there’s no way to bring him into bow range. Or, hell, a booner you have never set eyes on suddenly shows up in the field and stays out in the middle of the cut corn, feeding, and then disappears into the woods forever.

What if you could have more control of situations like these? Heck, have a fighting chance? With a buck decoy, you can. It’s just a matter of know-how and when to use one (don’t use it on public land or during rifle season). Josh Tatum, a Kansas hunter and cameraman, and Michael Hunsucker of Heartland Bowhunter have been utilizing decoys for years with success. Whether you are shooting cull bucks or targeting a monster whitetail, these tips can bring more deer into your stand.

The Right Way to Set a Decoy

Tatum has been hunting the Flint Hills of Kansas his whole life. It is a unique mix of wide-open spaces, timber stands and river bottoms. You can have enough open country to watch a deer walk a mile one day and be sitting in an oak tree the next in the thickest thicket. A deer decoy can work in both scenarios.

“One of my best setups is to set a treestand where a buck cannot get behind me,” Tatum said. “I’ll set the decoy facing me about 20 yards away with the wind blowing in my face.”

In an ideal scenario, Tatum will hit the buck with a snort-wheeze call (no grunts unless it’s early in the season). It lets the buck know “hey, there is another stud deer around here and you are infringing on my territory.” The key is to make the decoy visible, so your target deer sees it and wants to brawl. And if it doesn’t work the first few tries, don’t give up. Sometimes a buck isn’t going to like the decoy, but when one does, the experience will be like no other hunt you have ever had.

“Old bucks are smart,” Tatum said. “If you call at them and they can’t see another buck, they know something is up. I have used a decoy, called to a buck and watched him come all the way to me from 800 yards, bristled up and stiff-legged.”

Check out this video from The Hunting Public of Matt (Tatum’s brother) and his wife Sheila Tatum shooting a Kansas buck that’s locked in to a decoy.

Hunting the Right Time of Year is Critical

In Southeast Kansas, the best time to use a decoy is from Halloween to the middle of November. That time frame is going to be different depending on where you hunt, but think of it this way: If bucks are looking for a fight (i.e. high testosterone), that’s when a decoy is going to be most effective.

Also, some hunters will shy away from using a decoy once they see bucks start locking on to does, thinking they are content and not interested in a confrontation. That is a mistake, according to Tatum.

“When you see a buck bedding down with does and another buck comes around, what does the dominant buck do? He runs off that young deer,” Tatum says.

The secret to making a decoy work in this instance is getting inside a buck’s “bubble.” A decoy won’t work if you’re a half-mile away from a big buck with does, but if you can sneak into 100 yards, it’s game on.

“And you don’t have to be in the tallest tree to kill a big deer,” Tatum says. “They are so focused on that decoy, you can be five feet off the ground and kill a mature buck, so a decoy gives you more options when there isn’t much cover.”

Many hunters that already use a decoy think they need to make it look less dominant so the decoy doesn’t scare off a shooter buck. Nothing could be further from the truth. Sure, if you are targeting does to fill the freezer full of venison, a decoy is no bueno. It’s been proven, does mostly don’t like sideling up to a plastic buck. But immature deer don’t seem to mind them. Curious, they are just as likely to inquire.

“It’s just not true,” Tatum said of younger deer being scared off by a buck decoy. “I’ve seen guys take one of the antlers off to make it into a spike, but I don’t think it matters. There have been spikes and forks that have come straight into the decoy while I’ve been hunting,”

Start Outside and Work Your Way In

When Hunsucker is hunting a new property, it’s an opportunity to use a decoy, given the right time of year. Reason being, is he’s not sure how deer are traveling in the area and doesn’t want to walk into the middle of the woods and blow out big bucks. So, he works from the outside in.

“When I first start hunting a place I am not familiar with, I’ll stay on the outside and put a decoy out, so just in case a big buck walks by, I can call at him and he can see that decoy,” Hunsucker said. “Try and set up on a fenceline or a drop off (a ditch or gulley) behind you so that buck can’t circle downwind.”

Read Next: Deer Tail Decoys: Beat Them At Their Own Game

He gets that a decoy is heavy and sometimes a pain to get into certain areas, but if bucks are skirting you, a decoy is a smart way to get their attention. And there’s nothing that says you can’t drive the decoy in on an electric buggy or truck, or at least get it closer to the stand so you don’t have to walk it all the way in. There are a bevy of different deer carts out there too you could use to wheel the decoy in.

“I can remember when we first got started filming hunts and used a decoy for the first time,” Hunsucker said. “Shawn (Luchtel) was in the stand and the decoy brought this younger eight-point across a field all bristled up; it was an adrenaline rush. He whispered ‘should I shoot this deer?’ and I said, ‘heck yeah, smoke him.’ That’s what hunting is all about: shooting what makes you happy and what gets you excited. It was one of our favorite hunts we had ever experienced.”

Judging Deer that Fall For Your Decoy

One of the difficulties you may encounter is judging the size of a deer coming to a decoy. When a buck makes a beeline for your decoy, he is going to “puff or bristle” up and that can make him look bigger bodied than he actually is. If you are wanting to shoot a buck of a certain age, you need to take that into account.

“I was in Iowa and this buck came into the decoy all bristled up and was probably a 150-inch deer,” Hunsucker said. “His body looked huge, but it was just hard to say with him bristled up. He was so riled, he blew up the decoy, and then when he settled down, you could see that he was probably just a three-year-old.”

Hunsucker always places the decoy facing and quartering to him. Bucks will almost always come to the front of the decoy, and that gives you a better chance to take a broadside or quartering away shot at the deer.

He also uses scent elimination spray (but not attractants) on his decoy, or if he has shot a deer already that season, the scent from tarsal glands (found on the hind legs of deer) can be used.

“I don’t know if you turkey hunt much, but it’s the same concept,” Hunsucker said. “Just like you would face a turkey decoy away from approaching gobblers, I like to do that with the buck decoy too. They are mad because that decoy is turned away and they want to be noticed, so they come right to the front of it.”