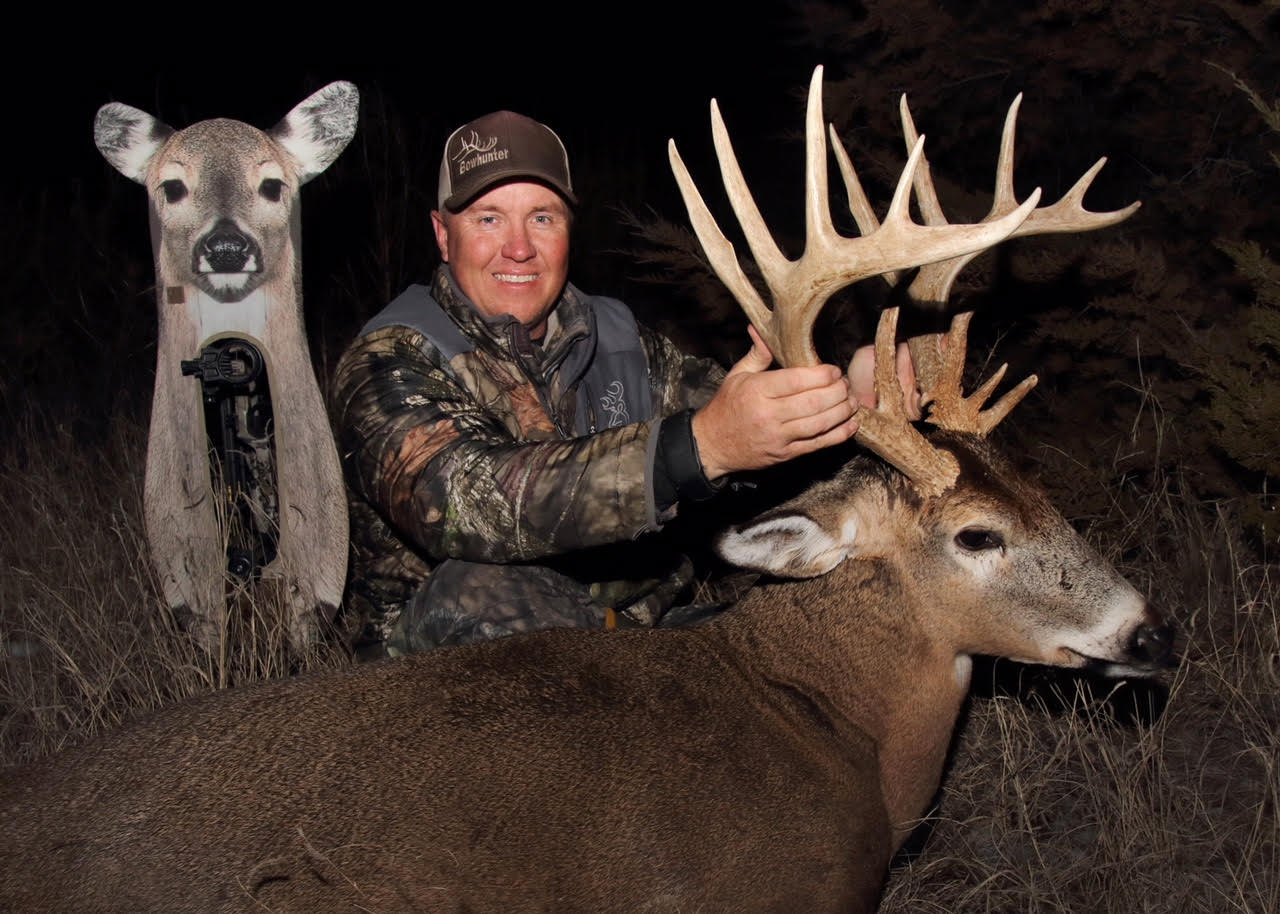 Bring more deer into range with these decoys

When used strategically, deer decoys can add excitement and even more success to your hunting. Whether you’re a die-hard ground hunter or ambush deer from a tree saddle, there are decoy options that fit several deer hunting strategies. To find the best deer decoys, I interviewed hunters who find consistent success decoying to find out which ones help them arrow big bucks.

This lightweight, foldable decoy takes up little room in your pack and deploys in a matter of seconds.

K.C. Smith of The Element doesn’t pigeonhole himself into a particular setup when it comes to deer hunting, and that includes decoying. He prefers the Heads Up Buck Decoy to close the distance on bedded or rutting bucks in open country, though he stressed that this isn’t the only way to target bucks in open country, just another tool in your belt.

“I use the Heads Up Decoy quite a bit,” he says. “It’s literally a picture of a deer printed on cloth, and I use that thing more for cover than anything. If I’m using it on a ground setup, I’ll place it on a bush that the buck can focus on, and it allows me to get away with some movement when I need to draw my bow.”

Like the Ultimate Predator Decoy, this one is light and super packable. One thing that Smith likes about the Heads Up is the removable antlers. They allow you to go from buck to doe super quick. But wind can be an issue, and sometimes the antlers will fly off if it’s especially windy, he says.

The obvious drawback to these types of decoys is their lack of depth. They’re great if a buck makes a B-line straight to the decoy, but a mature buck will likely approach cautiously and downwind unless he’s pumped full of testosterone.

“If you’re using the decoy to spot and stalk, if a buck approaches from your flank, that 2D decoy doesn’t look so good,” Smith says. “More times than not they’ll spook when that happens, and I actually had that scenario happen to me with a buck that came into 25 yards.”

If you don’t buy the stabilizer mount for the Heads Up Decoy, Smith says that a two-hunter approach is ideal. Instead of holding the decoy with one hand, you can have your hunting partner do that, while you focus on drawing your bow. Otherwise, it can be challenging when you’re hunting solo.

This decoy conveniently mounts to your bow, provides an ample shot window, and keeps you concealed.

It might seem like a no-brainer that Danny Farris would pick his own company’s decoy as his favorite. But the Ultimate Predator Whitetail Decoy wasn’t his brainchild. Farris was a fan of these decoys prior to owning the company. In fact, he liked them so much that he bought Ultimate Predator Decoys when the previous owners decided to sell.

These decoys appealed to Farris after he missed the biggest buck of his life during a spot and stalk in Kansas.

“After I missed that buck, I wanted to find a way to hunt whitetails in open terrain and draw their attention away from me,” he says. “I started with the doe and buck decoy. I knew a rutting buck would focus on the buck, and it would allow me to get a shot off with the bow-mounted doe decoy.”

One thing that separates Ultimate Predator from other portable decoys is that it mounts to your bow and provides you with a shot window, so you can run it hands free. You also don’t have to worry about peeking around the side of it when you draw your bow, thanks to the shooting window, which allows you to stay hidden when a buck trots into range.

The Ultimate Predator Decoy mounts directly centered over any compound bow, so it keeps you hidden but also provides great balance and doesn’t affect your arrow’s point of impact, Farris says.

Like any bow mounted options, this one doesn’t perform the best in windy conditions, but that’s a tradeoff for any lightweight, 2D decoy that folds into a small frisbee.

Farris has taken plenty of bucks using these decoys, but he does see room for improvement with the design.

“I’d like a simpler mounting system,” he says. “Our current system is versatile, and you can mount it on any bow except reverse draw crossbows, but it attaches with Velcro. I’d like to have one that doesn’t incorporate any, so you don’t have to worry about making noise if you need to make an adjustment.”

Jared Scheffler tailored this homemade decoy to fit his run and gun style of hunting, and it has helped him arrow bucks as close as seven yards.

If you’re a thrifty hunter who still wears your grandpa’s army fatigues, or you prefer DIY gear because you’re picky when it comes to equipment, perhaps you can borrow a play from Jared Scheffler’s book. The big buck stalker of Whitetail Adrenaline wasn’t satisfied with the decoy offerings for his aggressive tactics, so he built his own.

READ NEXT: How ‘Whitetail Adrenaline’ Proved Stalking Mature Bucks Is a Legitimate Game

“Around 2012, I was afraid that the decoys on the market would just blow around, so I built a prototype,” Scheffler says. “I wanted something that was light yet durable enough that it wouldn’t toss around in the wind.”

This prototype that Scheffler designed utilizes a deer head form and a deer hide that’s mounted on a cardboard cutout of a whitetail buck. The form head gives depth to the decoy, and the hide adds realism, which also doesn’t glare in sunny conditions like other decoys.

To keep the decoy from blowing in the wind, Scheffler uses a small tripod leg and a steel stake, which add enough weight to stabilize the deer in high winds. You can also use the stake to angle the deer however you need, he says.

While he still uses the decoy to kill big bucks at insanely close distances, Scheffler recognizes that it’s not without its flaws.

“It’s definitely not as light or packable like the Ultimate Predator or Heads Up Decoy,” he says. “But it does pretty well in the wind, especially high wind.”

For Whitetail Adrenaline junkies, Scheff’s Special has inspired others to create similar decoys, but he urges hunters to use caution anytime they want to decoy on public land.

“I always tell people to be extremely cautious if they want to make one,” he says. “I’ll pull that decoy down if I see someone drive by. I know a guy who did this and got shot at on an open prairie. Luckily, he wasn’t hit.”

The aggressive stance, anatomical proportions, and Dave Smith details make the posturing buck the most realistic decoy by far.

Like other Dave Smith Decoys, the Posturing Buck possesses more realism than most competitors. The posturing position and pinned-back ears mimic an aggressive buck that’s ready to establish dominance. If you’re looking for a decoy to deploy during the rut, the posturing buck should grab the attention of a buck that’s cruising for a hot doe.

However, all that realism comes with a price. A steep price. Yes, this decoy will probably fool more deer (and hunters for that matter) than cheaper options. But if that realism gets you a shot at a big buck, it might justify every penny.

For less than $150 you get two realistic decoys that you can quickly deploy whether you’re hunting your farm’s ladder stand or run and gunning open country.

If you have a tight hunting budget, getting every penny’s worth can help maximize your hunting season (and keep you in good standing with your significant other). For less than $150, you get two decoys (one buck and doe) from Montana Decoy. These lightweight decoys use realistic whitetail photos that are printed on cloth, so you can pull up stake and pack them down when you need to make an adjustment. Two decoys also give you options when it comes to your setup, whether you decide to deploy both or just one of them.

Even though these decoys create a 3D effect, they’re still 2D, so if a buck gets too close without giving you a shot or tries to circle downwind, the jig is up. But if you can position these on the edge of brush, you might skirt around this dilemma.

The Primos Scar is a classic decoy design that has a sturdy base, a tail and head that move in the wind, and a reasonable price.

The Primos Scar resembles a classic decoy that most treestand hunters are familiar with, but it features a few subtle details that add realism to help fool cautious bucks. Deer don’t stand still for endless hours on end, and your decoy shouldn’t either. The head and realistic tail both move in a slight breeze, so this decoy doesn’t look like it’s frozen and (hopefully) won’t tip off a buck that’s coming to investigate.

For transportation, you simply pack all the parts into the main body compartment and store inside the travel bag. The Scar lacks the realism of other decoys, and the details on its body fall flat. However, I do appreciate the antler size, which isn’t too small but not so big that it wards off a big buck.

Q: How far can a buck hear a grunt call?

In ideal conditions, a buck can hear a grunt call 100 yards away. But if it’s especially windy or you have several terrain features between you and where the deer are bedded, it might be harder for a buck to hear your best deer calls.

Q: Should I leave deer decoys out overnight?

It’s probably not a good idea to leave a deer decoy out overnight, especially if you plan to hunt over it the next day. Decoys can sometimes spook deer, and if a buck gets spooked the night before you plan to hunt it, you’re dashing your chances of getting a shot at that buck and putting him on alert.

Q: Can you use an archery target as a decoy for deer?

Technically, yes, you can use an archery target as a decoy, but it probably won’t work as well as an actual decoy and transporting it can be difficult.

The best deer decoys won’t work every time, but they can fool a rutting buck every now and then. If you decide to add decoys to your tactics this fall, be sure it’s legal in your area and you’re not hiding behind a decoy during gun season.

For this review I interviewed deer hunters that find consistent success killing big bucks with decoys. I picked their brains about which features make these decoys ideal for their preferred hunting tactics, and how they use them in various hunting scenarios. For other picks, I relied on previous experience.