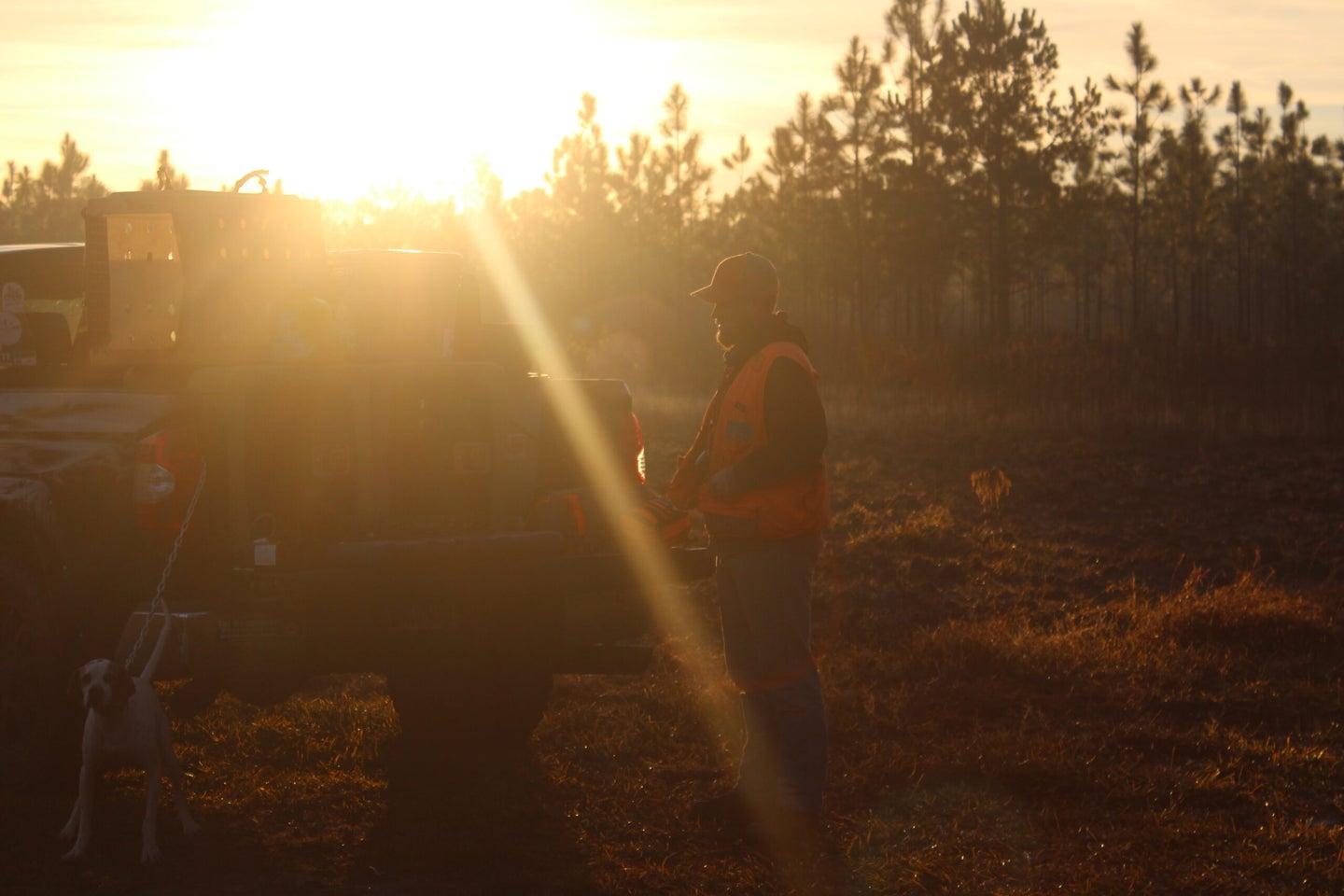 Just before midnight my hunting buddy Craig texted me about a little known public-land area that could be promising for new coveys of quail. Craig is sure enough a bird dog man, and has hunted everything from grouse in Utah to ducks in Arkansas to wild bobwhite quail here in Georgia. So when he texts you about a new hunting spot, you pay attention. We arrived 10 days later, dogs in tow.

At the check station, Craig and I ran into an interesting sign posted by the sign-in sheet. It said there was to be no quail hunting unless hunters were drawn for a quota. This didn’t make sense to us since Craig scoured the 2020-2021 season regulations and nowhere did they state that the general public would not be allowed to hunt the property. So Craig got on the line with the DNR, and after a few phone calls and a little time waiting, we were told that someone had apparently posted the sign as a way to discourage any hunter willing to believe the sign. The DNR gave us the green light and wished us luck.

RELATED: Canadian Hunters who Survived 2020 Rewarded with Another Uncertain Season

We were hungry for new birds, but more importantly, new experiences to share. Craig and I both love to hunt wild birds on public lands. We share waypoints and drop pins to each other, and the partnership has truly made our journeys that much more enjoyable—and successful. But in the four or five times we’ve hunted and trained dogs together this season, never has it been about killing a limit of birds. Frankly, I probably set myself up for failure by choosing to carry a new AYA .410 in the woods to shoot these fast-flushing birds. And I should probably say “shoot at.” We did indeed miss a few that day.

At some point during our hunt, we met a gentleman with two Pointers in the dogbox in the back of his pickup. He asked whether we found any birds yet. We said no, because at that point we hadn’t. Throughout the short conversation, we politely interrogated each other about where we’re from.

He said he was from the city of Bishop, and Craig’s parents are from there, so the covert we were hunting was named “Bishop” after this gentleman. Had he hung around a little longer, we’d have done what we did a month earlier with other acquaintances, and invited him to put dogs down and hunt with us. I had my two Pointers and my Lab, and Craig had his Wirehair, and Mr. Bishop had his two Pointers. We would have covered some serious ground. But, Bishop didn’t seem too keen on working the area with us and promptly drove off. As a mostly solitary hunter, I do understand.

But as he disappeared down the road, Craig and I were both thinking the same thing. We would have gladly invited him to share the joys of this newfound place.

The encounter made me wonder: Why would anyone NOT want to share it?

Sure, we were not out to give away GPS coordinates, but we also weren’t out to discourage anyone from finding their own joy and success. In turn, encouraging others to get out on public land directly affects their appreciation for our outdoor spaces and their conservation.

While Craig and I hunted our way through the historic longleaf pines, we stopped to admire the size of their long needles and the intricate structure of the pinecones. Craig and I walked through the WMA with an appreciation for the habitat work being done on this land. There was an older gentleman who was cutting down trees who gave a little nod to our efforts and waved us on as we drove to new areas of the WMA. This was far from the first WMA we had hunted, and at each we’ve extraordinary efforts of the DNR, Tall Timbers, the Longleaf Alliance, and of course, Quail Forever.

Just a week before, while signing out of a different Georgia WMA, I’d been addressed by another gentleman, an attorney, well-fitted in new Orvis gear and glowing with public-land success. He’d told my buddy, Josh, and me that he’d read an article of mine that inspired him to pursue public-land bobwhites. He’d found four coveys and was able to take home a nice bit of table fare that day. I’d not given any specifics on where to hunt in Georgia, yet this gentleman found the gumption to get it done on his own.

These disparate encounters raise a more philosophical question: “What is our role as hunters, going forward into 2021?” And what does it even mean to “do our part” for conservation and advocacy to keep our hunting traditions thriving, welcoming, and sustainable?

There is a part of me that gets discouraged by the fact that someone out there put forth the effort to deter other hunters from hunting the same public land areas that we all own as tax-paying citizens. I can’t help but draw lines between this event, and the general spread of misinformation and cable-news shenanigans plaguing our country. If the chicanery of the United States in 2020 has shown us anything, it’s that thoughtfulness and unification is the only path forward. Division leaves us all alone.

I’m still not sure why we are still choosing to forsake our trust in nature, statistical observation, and science with the polarization of the country. These days it’s easy to wonder if we’re too far gone. Has human existence become the bane of this planet? Are we, as a species. as destructive as our human history suggests? Is there no one to trust in our communities?

But a public-land quail hunter is nothing if not an optimist. And I still believe that we are better than this. Our job as hunters extends much further than just buying licenses and managing wild game populations. And there are so many good people who have come forward to show us the light.

To name a few, game changers like A.J. DeRosa and Chet Hervey came together as the heads of The Northwoods Collective and Project Upland to tell new, authentic upland hunting stories in film. Spearheaded by Wil Sensing, Project Upland and Backcountry Hunters and Anglers manifested one of this year’s top films, Public Grouse. And speaking of BHA, I’ve had the pleasure of working closely with Land Tawney and Zack Williams on their Backcountry Journal. As a force, BHA continues to unite outdoorsmen and women through initiatives like Hunting for Sustainability and of course, the magazine itself. Then there’s Reid Bryant of The Orvis Company and Whit Fosburgh of the Theodore Roosevelt Conservation Partnership, both leaders of our community who continue to advocate for outdoor education and sustainable conservation practices. Both gentlemen have put pressure on large corporations to make great contributions in the name of equity and inclusion. All of these have their own projects and goals.

But they all have one thing in common: They’re working to change the narrative of what community is really all about. They have directed our focus to what actually matters: unifying educated and informed hunters who care to build a public environment of trust, love, and careful observation. Admittedly, I haven’t enough time or literary space to thank so many others who are also doing great work for our beloved community, but there is just enough to leave a simple thank you to all.

We can each be part of this change for the better. We each have the capacity for love, so why not exude radical love for our fellow hunter, and fill our public spaces with that same radical love? For many hunters and outdoorsmen and women, the pandemic didn’t necessarily overshadow our love and concern for the environment. More people went hunting and fishing this year than any time in recent history. Campgrounds, boat ramps, and public land parking lots were all packed. But on a national level, the environment was put on the backburner for all our other tragedies. I question if we, as a nation, did our part for environmental conservation and climate change as the country seeks to reshape itself after the phenomenon of 2020.

With a few exceptions, I feel that while we were consumed with a gamut of other social and economic issues, environmental issues were undercut or defeated. We now must rebuild our trust in each other and to do that we’ve got to find common ground in the environment and climate in which we all reside.

So I want to challenge our hunting community to do a few things this New Year. Let’s place our trust back in each other, and let’s build a community that embraces the challenges of public-land hunting and invites others to pursue those challenges, so we can all revel in the glorious successes and hilarious failures of a day in the field. Let’s raise the level of care and concern for our lands that will bolster the many conservation initiatives that so many of our beloved organizations have set forth. And lastly, let’s become a beacon of light for others who might be searching for the same joys and satisfaction that we all find in the field.

One of these days, I’ll make contact with that little .410 while my dogs hold steady to the flush and shot. And on that day, the crisp air will be cut with the pop of 2-inch shells, and our cheers will rise as the feathers fall along the newly-burned edges of the longleaf pineywoods.