Turn Your Flushing Dog into a Turkey Hunter

Just below the skin of any good flushing dog is a turkey-hunting dog just waiting to come out. So it... 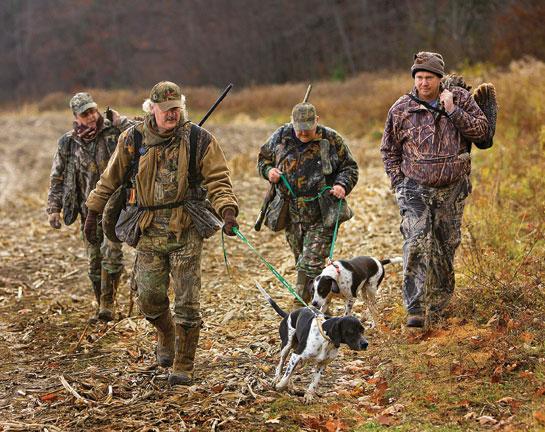 Just below the skin of any good flushing dog is a turkey-hunting dog just waiting to come out. So it was with my Lab, Hank, when he got his first flush on a flock of hens and poults.

I’ve seen it happen to other hunting dogs, ranging in size from tiny Boykin spaniels to a Chessie with a frame the size of a decent whitetail. Turkeys are addictive to flushing dogs. I’m guessing it’s because the flocks are often large, the birds are big, and together they carry enough scent to be detected 100 yards away.

This fall 30 states are allowing the use of dogs during their fall turkey seasons. That’s up from just 10 about 20 years ago. (Check your state’s regulations before heading afield.)
For decades, Appalachian hunters have bred dogs to find and scatter fall flocks, which are then called back together. Their dogs range widely and bark at the flush site. But across much of America, hunters can find birds feeding in open crop fields, then watch their dogs have their fun.

Spot, Stalk, and Scatter
On most of our hunts, which are numerous since Kansas has a 3 ½-month fall season with a four-bird limit, we’ll spy the birds from a road or hilltop. We stalk with the dogs at heel, then send them in when we’re as close as we can get.

The birds usually scatter like a well-smacked rack of billiard balls because a dog won’t stop chasing as long as there’s a bird in sight. Then it’s time to set up at the site of the flush and start calling. Hide your dog in a quick brush or pop-up blind.

Letting a dog scramble a winter flock just prior to fly-up can make for some vocal hunting the following dawn as the lonesome birds call before flydown.
**
The Re-Flush**
If the birds scatter in thick ground cover, get the wind in your dog’s face and take the game to the birds. In tight cover, turkeys–especially young-of-the-year birds–often burrow in and hold like oversize quail. Hustle to stay with your dog because he’ll get the scent many yards out and rush to the flush. Lay off the straightaway shots and take the angles that expose the head and neck. With a decent load, even a mature bird will fold like the owner of a pair of deuces.

Hang back and give your dog the joy of the retrieve, even if he struggles a bit with the heft. Since his first turkey retrieve, Hank has considered himself a turkey dog that also fetches waterfowl and pheasants. Once your dog gets a taste of fall turkey action, he just might feel the same.