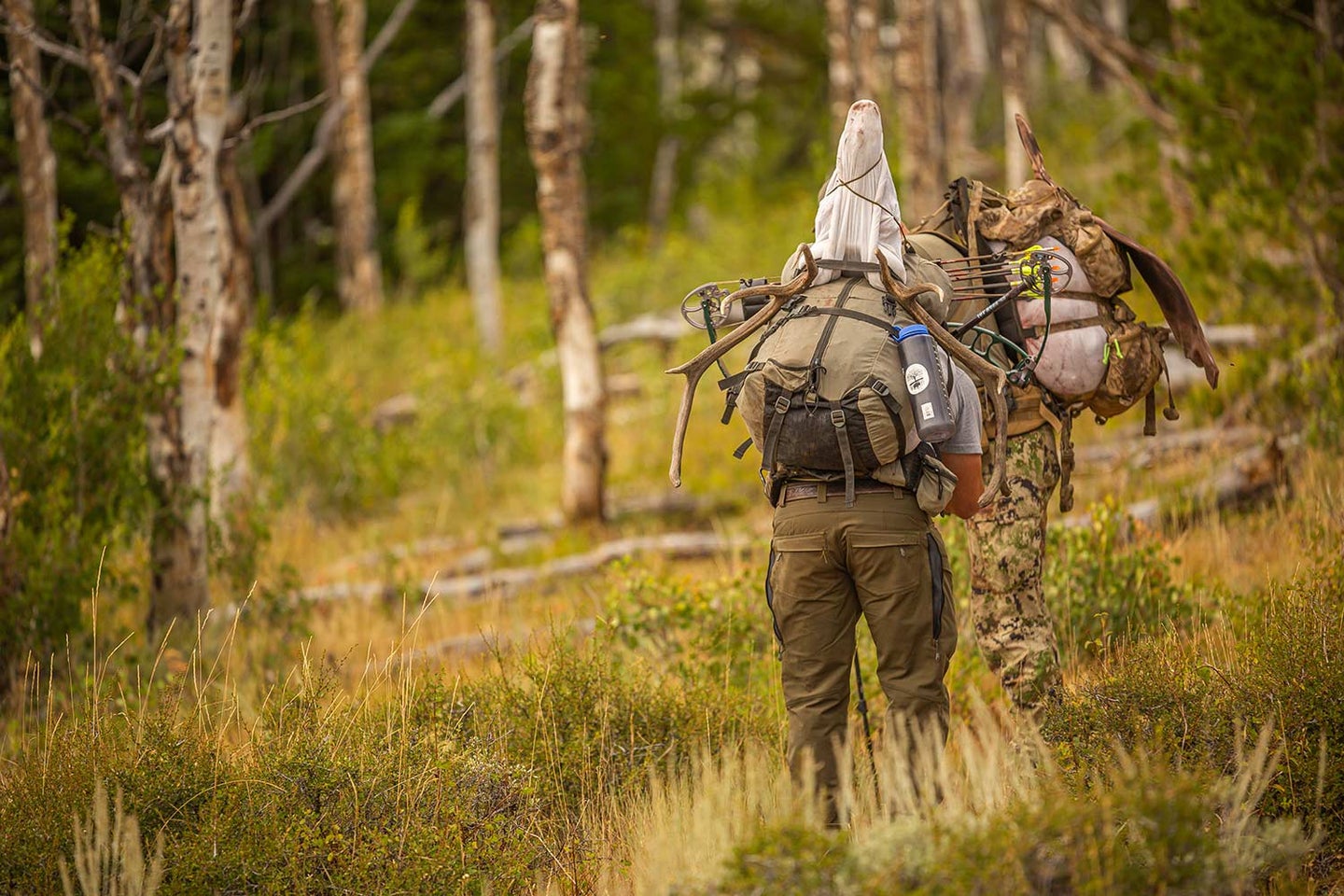 Guides often downplay the physicality of hunts in order to keep their clients in the right frame of mind.
SHARE

If you’ve ever been on a guided hunt or fishing trip, you know all too well that some can be more nightmare than dream. A recent hunt in Nebraska immediately comes to mind. It was November and the rut was rocking. A crisp front was pushing through from the north and the forecasted temps were perfect.

“You’ll be the first one in this stand,” the outfitter told me over dinner that evening. “It’s a great set. Been saving it all year for a special client.”

That was all I needed to hear. As the sun rose the next morning, I looked around at what I thought to be an epic set—a small patch of hardwoods jutting out into a cut cornfield. Hours went by. Nothing. My hopes faded. When I climbed down, I found cigarettes, candy bar wrappers, and some plastic baggies under my stand. Guess what? I wasn’t the first one to ever sit in the stand. In fact, I probably wasn’t one of the first 10, but my guide wasn’t about to tell me that.

The truth is that there are some great outfitters and some horrific ones. I took some time, recently, to chat with some of the best guides I know in an effort to help you spot some of the the yellow flags that might come up on your next guided trip. They were all glad to chime in on the seven things guides might not necessarily be forthcoming about.

“Although you’ll hear this a lot,” says one Illinois outfitter, “I just can’t tell a client this. I feel bad, but it’s so true. For example, I have a stand that is just money—except that it’s not. I’m not sure if it’s cursed or what. I get boatloads of daylight photos at this spot, and there are always multiple big bucks roaming through, but when I put a hunter in there they don’t see a thing. It never fails. We’ve hunted the set for four years now, and we’ve yet to kill a deer out of it. We just have to keep hunting it, though. With that noted, my stomach churns every time I put a hunter in it. Of course, hunters always ask things like how many deer we’ve killed out of the stand and what’s the biggest deer that’s been taken from the set. I don’t want to lie, so I just change the subject. I don’t have a silver tongue and I’m a terrible liar.

“I figured this year was our year. I had three shooters go by the tree on November 2. We were going to break the curse of the Crooked Creek set for sure. Nope. One guy set there on November 3 and 4, and saw three does. Maybe next year.”

“It’s rare, especially in this part of Kansas, that I don’t have an X to kill geese over,” says one of my favorite Kansas waterfowl outfitters. “However, it does happen. I never tell a paying client that we will be running traffic and not sitting on a slammer field—and I hate not telling them. I’ve actually tried, but the words just don’t come out. I take a lot of pride in my ability to put my clients on birds. If I don’t have an X, I just work extra hard with my scouting and bring some good buddies who are really good with the calls. We flag like crazy and put out ridiculous amounts of decoys. Reminds me of a great movie called Daddy’s Home Two. In it, Mel Gibson and Mark Wahlberg are father and son, and they repeatedly try and tell one another that they love each other. They can’t. The words just don’t come out. That’s me trying to tell a client I don’t have an X.”

“Quality food is a big part of our turkey and axis camps,” says a popular Texas outfitter. “We are known for our quality hunting and amazing food. Sadly, it’s hard to keep a cook, especially a good one. I’ve had cooks quit multiple times. They just can’t keep up with the work and the hours. They get a better offer and they move on. More than once, they’ve quit the day before a group of clients were scheduled to arrive. Let’s just say my guides and I have learned to cook lobster, crab, fish, steak pretty well over the years. I remember one year we had a return group of clients coming. These guys have come every single year for six years. They let me know they couldn’t wait for old Jack to whip up some lobster bisque. Sadly, old Jack left exactly three hours before their arrival. I think kidney stones is the excuse I came up with.”

4. “The Fishing Has Sucked Lately”

“ Walleyes move and patterns change,” says one of my respected Minnesota walleye guides. “Although I love those days and weeks when my clients and I can pull up on any rock point or isolated sand bar and start hammering fish, but it doesn’t happen every single day of the season. Sometimes, clients have to help me do a little experimental fishing. We have to go hunt for fish. It makes for some interesting conversations in the boat. Typically, I find fish after a few swing-and-miss spots, but sometimes the search goes into extra innings. That’s when the, ‘Man you should’ve been here yesterday,’ speeches start. I hate being that guy, but I know I will eventually find fish, and I just have to, well, bullsh&$ a little to gain some time and get me into the end zone.”

“In all seriousness, I never tell clients exactly how far we may walk in a day,” says my New Mexico outfitter buddy. “Searching for elk, Coues deer, and mule deer is a grind. I guide on public dirt and hikes of 10 miles or more are common. Of course, I tell all of my clients to expect long hikes and to prepare accordingly, but I never say exactly how far we may roam. I just keep nudging them along, letting them know that if we keep going good things will happen. It’s amazing when we find animals how quickly they forget the grind. And for those times when we walk all day and don’t find a single sign of life, well, I try and cook an extra good meal at night and get them pumped about the next day. You just do what you have to do.”

“Guys and gals who come to hunt with me don’t understand just how hot it gets inside a ground blind in August,” says a Colorado pronghorn outfitter. “They show up full of piss and vinegar. For most, it’s their first hunt of the fall. They are so excited. Then, they get in a ground blind and temperatures inside climb to 115 degrees. The piss and vinegar fades. In fact, most don’t piss much at all—their bodies absorb all the water or it seeps through their pores. It can be horrible. Most start to text me within the first couple of hours, when the buck they’re waiting on typically comes to water. Do I know? Sure. I have a pretty good idea. I run cameras on all of my tanks and ponds, but I’m not about to give them a time. Pronghorn hunting in a blind can be a grind, and you need to be ready to sit 14-hour days. You have to be in the blind to kill them. How do I respond to those texts? ‘Never got them. I must have been out of service.’”

“This is not so much a fib, as it might be an overstatement,” says a friend who is a former Gulf of Mexico charterboat captain. “You’ll see signs out on boat docks or in advertisements online—especially in touristy locations— that promise that you won’t have to pay for a charter trip if you don’t catch fish. Well, you will most definitely catch fish. That’s because we all have ‘day-saver’ species to fall back on. It might not be the species that you hoped to catch when you booked the trip, but if your captain suddenly wants to make a move and get in on a hot bite for barracuda, sharks, or some snapper that you’ve never heard of before, it’s likely that he’s trying to deliver on his guarantee—and save his day rate.”

My guide friends, being the exceptional outfitters that they are, provided me with some additional warning signs to be on the lookout for that will indicate you may be in for one bad rodeo.