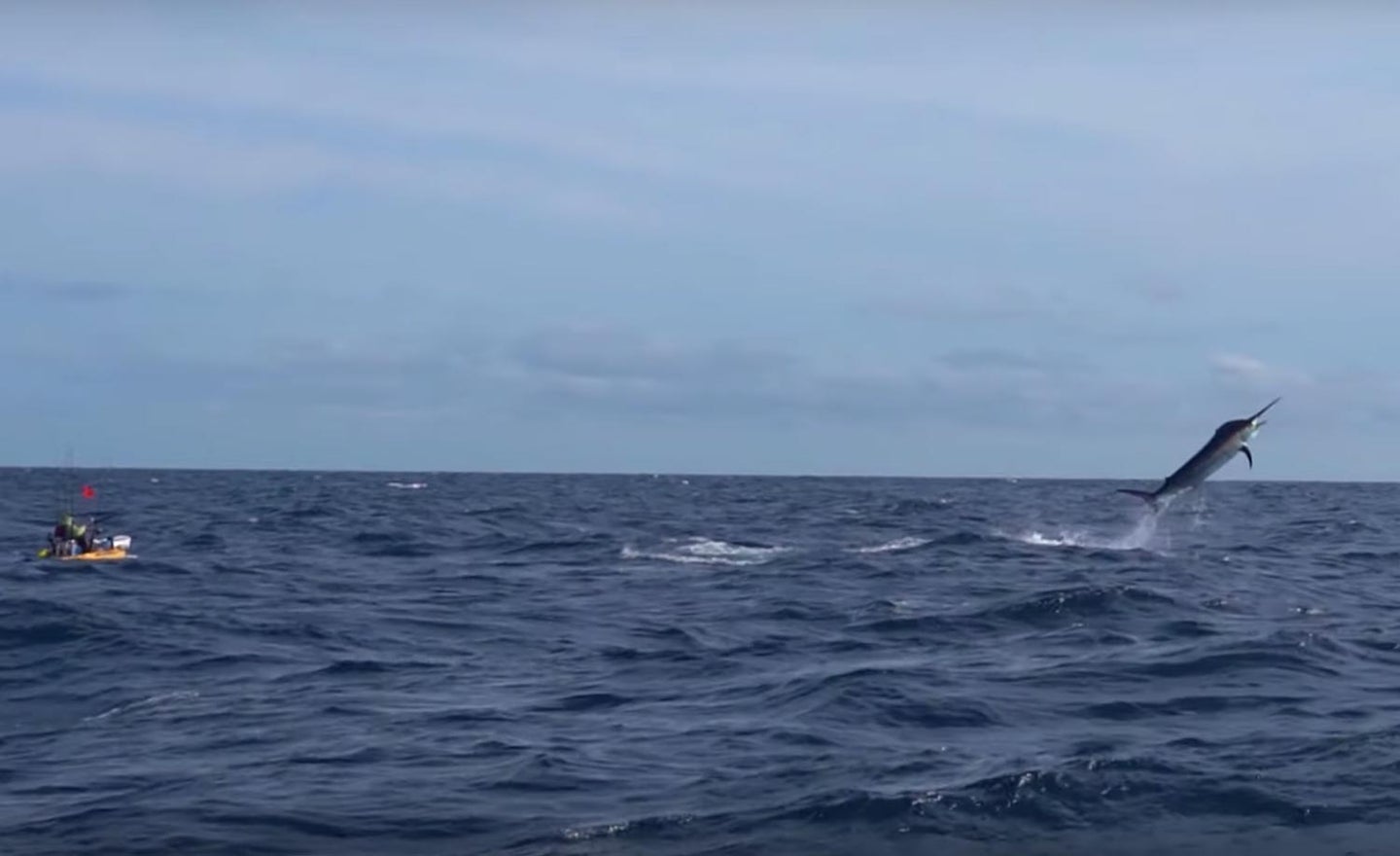 Adam Fisk, Head of Operations for the Los Buzos Resort Panama, caught a record 450-pound marlin from his kayak last year. Now he’s done it again, hooking into an estimated 500-pound marlin that towed him 15 miles offshore. YouTube angler Robert Field was there to capture the entire thing on video.

I reached out to Adam Fisk on Facebook to ask him a few questions about the epic catch. His responses are below:

Outdoor Life: What’s it like fighting a 500-pound marlin in a kayak?

Adam Fisk: Fighting a marlin is unlike any other fish. The power of a monster like this is unbelievable especially when you are battling it from a kayak. I have pretty big gear that I target marlin with out here and even with it, sometimes I feel like the fish doesn’t even know I am pulling on it.

Going into my first marlin fight I thought I was prepared with much smaller gear and I was SO wrong! I have fought tons of sailfish back in Florida from the kayak and knew it would be drastically different but thought they had somewhat prepared me for this but it really was a whole other game. Much of the fight the marlin stayed deep just pulling me along.

He generally stuck around 40 feet under the kayak and slowly pulled me directly offshore. I knew he was at 40 feet because my fishfinder cut out at 450 feet of depth but started marking 40 feet every time the fish was directly under me. It was so big my machine thought it was the sea floor. I could put as much pressure as I could possibly manage and it would not budge! At the beginning of the fight I almost didn’t believe what I was seeing.

We had gone out fishing the one free day we had to try to get some content for Robert’s youtube channel. Right away I caught a blue runner for bait. I was right by Robert so I tried to catch him one too but the school moved out too fast before we could catch another. I decided to keep the blue runner next to my kayak while I headed out to my marlin spot. There are some highly productive spots for roosterfish and cubera snappers between where I was and my marlin spot and I decided to keep my bait at my side while I passed by these spots because I felt there was a marlin out there and I didn’t want anything else to grab my bait.

Once I got to the spot I let out about 100ft of line and pretty much sat still. I actually pulled out my phone and started answering emails and questions from incoming guests. After I answered a few I noticed I had drifted slightly off the spot. I went right back over to it and dropped my jig to the bottom to see if I could pull up a grouper for dinner. As soon as my jig hit the bottom my live bait got smashed and my reel started screaming. I turned around, waiting a few seconds and pushed up the drag.

As soon as there was pressure the marlin shot out of the water coming strait for me. You can see this in the video. I start reeling as fast as I can and pedaling to try to keep the line tight and get out of the way of the charging beast. It was at this moment that I was somewhat in shock. It actually happened… AGAIN!

OL: How does it feel to do this twice now?

AF: The fact this is the second time this has happened is truly incredible. I keep thinking about the amount of kayakers I take to this spot with the same bait as I had and no guests have landed one yet.

Recently however, two guests hooked up while live baiting yellowfin tunas. Both fights lasted less than 1 minute though before their lines broke. I’m still in disbelief of how this went down so perfectly. I had probably the most skilled videographer/editor in the kayak fishing world (Robert Field) with me the one day I finally had a chance to fish without guests and the most epic thing possible happened and the footage could not be better!

OL: What was going on with the radio during the first few minutes of the fight?

AF: As soon as I had a chance I called over the radio “MARLIN ON MARLIN ON” and continued fighting until I could get tucked in and in a more comfortable position. After its first series of jumps it dove and just started pulling me out. After my first radio transmission I just heard some static come through. I call again after a few minutes “MARLIN ON MARLIN ON!” More static… I am thinking no one knows I am hooked up and I’m just getting towed out to sea. But I know I am safe because I have multiple ways of communication.

I pull out my phone and send a voice message to the Los Buzos Group chat on Whatsapp as well as to Adriano and Pio back on the beach. It turns out Darret had heard my call of MARLIN ON and had headed out to me after I gave my location. Soon he was close and could hear each-other clearly. He relayed the situation to Robert and everyone was quickly on the same page.

OL: How big were the waves at the end of the fight?

AF: The waves really started kicking up at the end of the fight. This is nothing we haven’t seen before but being connected to a 500-pound fish and managing the kayak in the waves does get dicey. Especially because I found out later in the fight that if I turn broadside to the fish, that I could put more pressure on it and almost every time I did that, the fish came up to the surface and jumped.

This technique is something we always tell people not to do because it is a good way to flip the kayak. But in this situation I needed to do it or the fish would not surface. I took one big wave over the side of my kayak which completely soaked me and everything onboard but I did not flip and was able to turn into all the rest and either cut through or hop over them all.

OL: Was there a plan if the marlin or a wave flipped your boat?

AF: There is always a plan for any situation that could happen. Every moment out there I am thinking… if this happens what am I going to do? I go over every scenario and have a plan for anything, so I always feel comfortable and ready for anything.

At one point I was ready to bail as the marlin was charging at me and I thought I may have to jump and ditch the kayak for a minute. If I flipped, I knew all I had to do was back the drag down just above free spool so I didn’t get dragged down by the fish, then I could flip the kayak over, hop back in, and get back to the fight.

OL: What’s the next catch for you? More marlin or is there another species on the bucket list?

AF: The fish that is still high on my target list is a big yellowfin tuna. I have caught hundreds of small ones but my biggest is no more than 50 pounds. I lost one pushing 100 pounds one day after it bent out my hook after a 45-minute fight. That was the closest I have gotten and I am still looking to check that box!

OL: What is so special about Panama?

AF: Panama really is a special place especially the part we are in. There is almost no boat traffic at all. On a daily basis you may just see our friends Adriano, Juni, and Pio out there with their clients. Sometimes you see commercial fishermen but they are generally only hand-lining for snapper or trolling cedar plugs for tuna. Very few people target the larger gamefish like cubera snapper, roosterfish, sailfish and marlin. So with almost zero pressure on these fish we are able to reliably catch a ton of them on a consistent basis.

About 15 of our clients have caught roosterfish larger than the world record. It is also very cool in my opinion to be somewhat self sustaining, off the grid, and not reliant on people or services that most people are accustomed to. Living here you really see how unnecessary many things are that most people don’t even think about. However I do miss many things and freedoms we have in the United States and take full advantage of them when back.

Read Next: The 10 Best Gifts to Buy Kayak Anglers This Season

OL: Is there anything else viewers should know about catching a marlin from a kayak?

AF: If anyone plans on targeting marlin from a kayak you NEED to be prepared. You can’t just go out without proper gear, a plan, or team to back you up. My marlin combo is an Accurate Valiant 1000 2-Speed filled with about 700 yards of 80-pound braid with a topshot of 80-pound Diamond mono and 15 feet of 100-pound fluorocarbon with a 13/0 in-line circle hook.

With this combo you will be able to put enough heat on the fish that you can bring it up and not just fight it to exhaustion. These fish die all the time during fights with people who just want to get a picture of them. To responsibly go after these fish you need to be fit and willing to give it all you have to get the fish up. If you can’t, the fish deserves to win.

You need the long leader so you can have the abrasion resistance when the tail whacks the line over and over throughout the fight, a strong circle hook that will not bend out and that will not gut hook the fish, a reel with a ton of drag so you can put sufficient pressure on the fish. The two speed reel helped so when the fish was digging down I could slowly winch it up in low gear when possible.

My rod was custom made by Adrenaline Custom Rods specifically for live baiting for big game and I could not be happier with it. Both my marlin were caught on this exact setup. Most importantly you need to remember to not overthink it, just hold on tight, balance yourself, keep that rod bent, get out of its way if it is jumping towards you, wear your PFD, always keep a radio on you, a good knife so you can cut yourself loose if something happens (we love our Spyderco Waterway knives which are specifically designed for a lifetime of rugged offshore kayak fishing).

Also, remember you will not be able to get a fish like this yakside and calm enough to grab safely… if you are, the fish is either dead or going to die. Get some buddies to come with you and let them film it. Get that epic footage and make sure you shoot it to me if it happens!