The best elk guides on seasonal tactics, gear, rifles, and bows for your next hunt 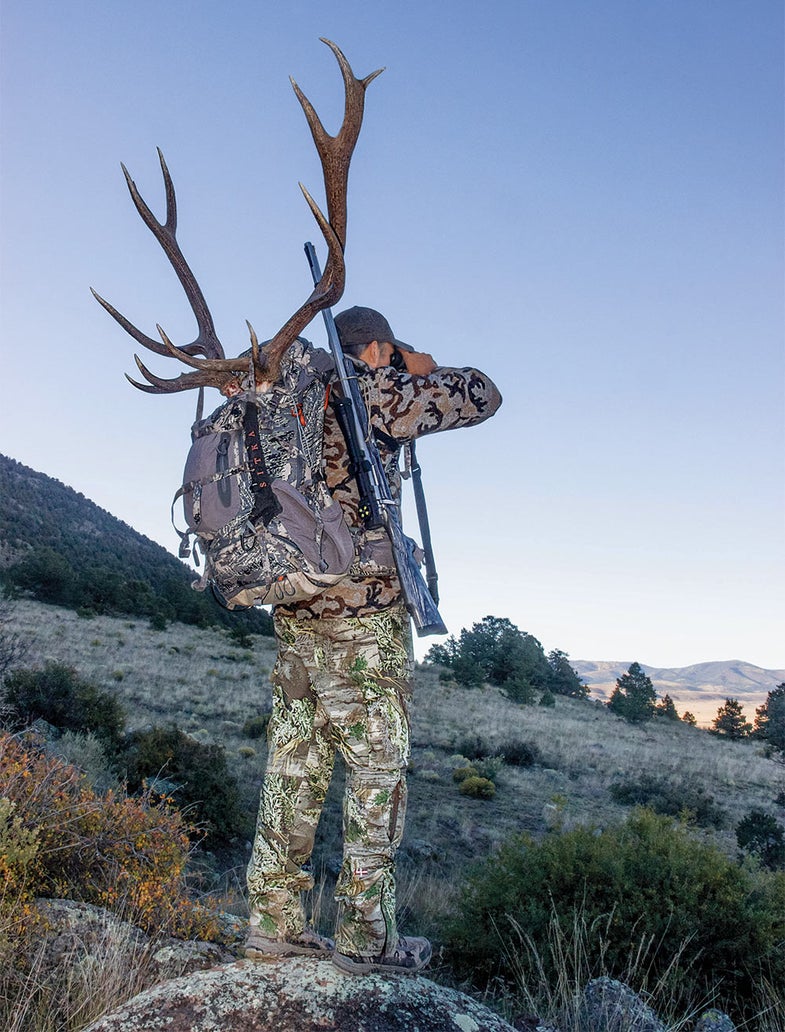 Experienced elk hunters know the odds of success are as steep as the mountains they love. Months of planning, miles of hiking, and hours of glassing rarely result in an elk, at least statistically speaking. Across the West, harvest rates are well below 20 percent.

But some hunters consistently harvest elk year after year, and we’ve asked some of them to share the secrets of their success, not only with season-specific hunting strategies but also the sorts of gear they rely on. Elk country devours cheap gear, each of these experts stresses. Actually, they note that elk country takes its toll on all gear, but the rate of attrition is slower with high-quality products.

Jeff Lester is owner of Hunt Hard Outfitters, based in Eager, Ariz. He hunts primarily in eastern Arizona and western New Mexico.

Lester targets bulls moving from feeding areas to bedding areas. He calls these transition areas the “playing field” and calls sparingly, preferring to physically position himself between the two types of areas. But it’s not an all-day strategy. “When elk head to bed, you should do the same.”

Lester focuses on transition areas between the autumn rut and the winter feeding grounds; these routes may vary from 5 to 30 miles long. The animals are often moving slowly, “smelling the roses,” Lester says. “If you want to kill them here, you need to know where those roses are.” Look for mid-elevation saddles, north-facing timber, and grassy benches near dense timber.

Lester’s favorite late-season method is simple: lots of glassing and lots of moving, which requires the hunter to be in excellent physical condition.

“Being in great shape will help you on any hunt, but on late-season elk hunts, you need to move when you find elk, because in rifle season you never know who else is looking at the same bull. Late season typically means rough country and effort that can be demanding on the heart, lungs, and legs.”

“Tripods are critical gear. That’s why I built a tripod, which I call the Pack Pod, into my pack. It’s not that it replaces my carbon-fiber stand-alone tripod, but it gives me options when I’m going in far and I need to shed weight. I have seen guys with cheap optics on tripods out-glass guys with high-dollar optics without tripods.”

Lester prefers his clients to use “any .30-caliber, as long as you can shoot it well.” His personal rifle is a .300 Remington Ultra Magnum loaded with 180-grain Nosler AccuBond bullets and topped with a Swarovski scope.

His bow of choice is a Hoyt compound with Grave Digger 100-grain broadheads, a setup he has used on his last four bulls. Additionally, he prefers a seven-pin sight to a single-pin system because, as he says, “things happen too quickly to make changes” with an adjustable bowsight.

Cliff Carney owns Carney’s Guide Service in western Colorado. Carney has been an elk hunter for 27 years and has guided professionally for the last 12 years.

In areas in which the season opens before the peak of the rut, Carney concentrates on north-facing slopes and water sources, trying to catch elk as they move in early morning or late evening. He runs a line of game cameras on these moist, shady, early-season spots, and uses footage from the cameras to plan his daily hunts.

Depending on season dates and weather, the elk are usually winding down their breeding activity by the time the October rifle season begins.

“The rut takes a toll on these critters,” Carney says. That means that the elk will usually be more interested in food and rest than in breeding, although there may still be a few cows in season and a minority of bulls that will respond to cow calling. When elk aren’t vocal, he focuses on the areas they use for feeding and bedding.

“In some cases, the elk have migrated to or are gravitating toward their wintering grounds,” says Carney. “Some of the larger bulls have separated themselves into bachelor groups. When elk slow down their migration and start to spend more time feeding, I glass from vantage points to find the herds and watch them for a day or more before I plan my attack. At this time of year, elk are bunched up in lower elevations.”

“Hard-wearing, lightweight boots are a must. If you can’t get to the elk, not much else matters. My next priority is a good light. I like the Blood Hunter HD headlamp because it frees up my hands, which I need when traversing steep terrain.”

“I have guided hundreds of hunters, and I’ve seen about every caliber take elk down efficiently,” says Carney, whose wife and daughter have carried light-kicking rifles from .243 to .308. “Obviously the larger calibers deliver more force and energy into the large game. It all boils down to efficiency, and being skillful with your rifle and knowing its limitations.”

11 Mistakes Elk Hunters Make, and How to Avoid Them

Scott and Angie Denny own Table Mountain Outfitters and guide in Idaho, Wyoming, and Nebraska. They also host the television program The Life At Table Mountain.

As the weather cools and breeding activity heats up, calling will entice bulls into range. But the Dennys stress that calling too much can either silence or repel vocal bulls. The Dennys prefer to use cow calls or the weak, tentative bugles of a subordinate bull to bring a herd bull in close.

Because the Dennys hunt elk in areas where the herds spend the majority of the season, they don’t really have specific mid-season tactics. They do note that rut-weary bulls will often separate from herds and bed down in areas with timber escape cover. Hunting them is often a matter of glassing from a long distance and then working into shooting range.

The key for the Dennys is what they call “comfort zones.”

“We don’t have a high amount of migration in our hunting areas,” says Angie Denny, “so elk mainly stick to known comfort zones as winter approaches. By this, we mainly mean food sources, whether that’s low-elevation agricultural areas or wintering areas with an abundance of south-facing slopes where the snow will bare off. We generally hunt these by spotting and then stalking into range, using any terrain features we can to get into these comfort zones.”

“Good optics are maybe the most fundamental and critical piece of gear,” says Scott Denny. “Seeing [the elk] is half the battle.” They recommend good-quality 10×42 binoculars for spotting elk, and riflescopes with good glass for the shot. Shooting is often done in the low-light conditions of morning or evening, so optics with good light transmission are critical.

The Dennys prefer that hunters bring along a flat-shooting rifle capable of making a shot at longer ranges, and their favorite caliber for elk is the .300 Win. Mag. Scott shoots a Mathews Halon 32 bow, Angie a Mathews Avail. Both shoot a two-blade Rage broadhead. “A good shot with any broadhead will kill a bull,” says Angie, but “a marginal shot with a Rage means your odds are still better than with a fixed blade.”