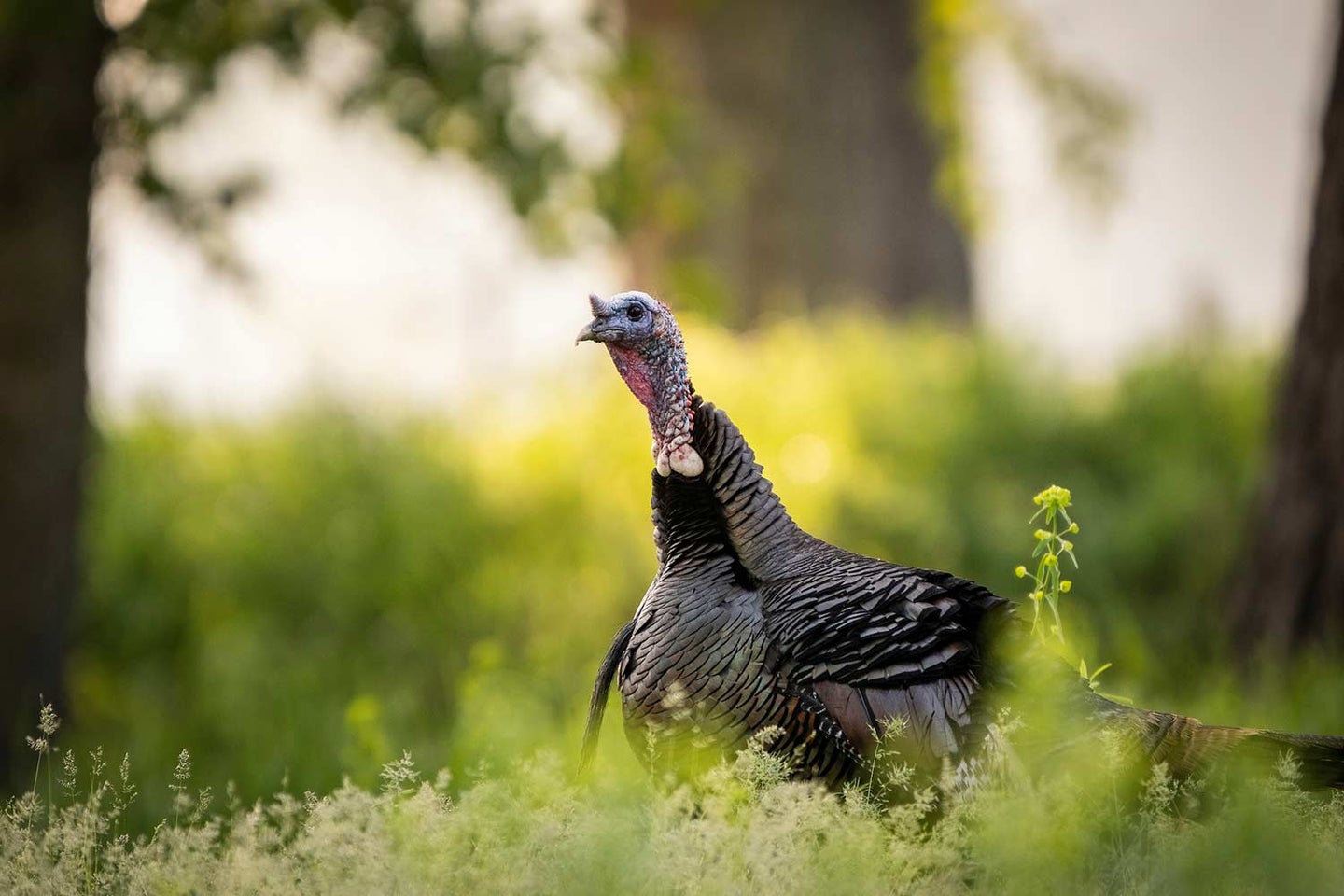 Ridgelines and traveled paths are a fine place to find a strutting tom. John Hafner
SHARE

Not all of us have the opportunity to turkey hunt vast public lands. In some places there just aren’t enough public acres for us all to utilize without setting up on top of one another. And certainly, many folks don’t own huge farms or have permission on multiple private properties to shoot a spring tom. In most cases, the more property you have access to, the better your chances for punching a turkey tag. I’ve been on tracts big and small, and can attest that killing a gobbler on a small farm—unless it’s the perfect farm and roosting a bunch of turkeys—is difficult. For the last few seasons, I’ve had just 40 or 80 acres to hunt.

On most small farms, the birds are only moving through the property, looking for food or to find more hens to breed. It’s one of the most difficult scenarios to kill a gobbler in, because birds have to be on the move near your setup in order for you to coax one into the decoys. If you hunt a small property, there are a few smart rules to follow. Just know, you have to put in more time than those hunters with better access. I’ve been on both sides of that fence—hard hunts and easy ones—and can tell you that patience and determination kill tough turkeys.

Creating prime turkey habitat is key to killing small-farm toms. The best locale I ever had access to was a five-acre field at the top of a ridgeline. It was my buddy’s deer-hunting property (which he has selfishly sold since getting married and having three kids), and he always planted soy beans in that field for the deer, but also for spring turkeys, because they love to come scratch in beans to find grubs and worms. It was an ideal setup: a small food plot in a clearing at the top of a hill.

Toms walk in the bottoms along creeks and then make their way up hills by late morning. They use the top of the ridge for strut zones and presumably can see farther, so it’s a good vantage point to be on the lookout for predators. Plus, high ground leads to flat areas like fields and food plots, which turkeys love. On a small farm I hunt now, there’s a clearing my uncle cut for fall deer hunts. There’s no food plot yet, but it’s flat and it’s at the top of a deep bottom where three ridgelines converge. My brother and I struck up a tom there this season. It came to within 35 yards but stayed behind enough brush and trees that neither of us could put a bead on him. He was a smart, old bird that came in cautious even though it was a locale we had just started hunting and hadn’t received any pressure. He knew something was up and walked away from us, spitting and gobbling as he disappeared behind a blowdown. Our intuition was spot on, we just failed to execute.

I think the reason that bird walked was because we picked the wrong trees to lean up against. Where to sit and place your decoy(s) is an artform I am still trying to master. Different scenarios call for different tactics, but the one rule I live by is “don’t turn your back on toms.” That means I never sit with my back toward the direction I think a bird is going to come from. You don’t want a bird to have to walk past you…if you can help it. We all move our heads and twitch unknowingly—that can spook a turkey and bring an end to your hunt. In this particular case, birds had been consistently gobbling from the west, so I made sure we were sitting with our backs to the sun and looking in the direction I thought the bird would come from. He did, but we were too exposed. When the tom crested the ridge, he was looking directly at us, and that was my mistake, and why he is still alive.

Pay close attention to travel routes. Deer and turkeys are creatures of habit—just like us—and they will walk the same paths all year long (maybe not daily). I like to set up near these corridors. The turkey that outmaneuvered my brother and I came through on a path, which we didn’t notice until after he busted us. Going forward, I will place a hen decoy just off to the side of the path he was using, and sit on the opposite side. That puts the tom’s focus on the decoy as he comes up the hill, not us, so there will be more of a window to shoot him.

Another trick I’ve used in the past is getting elevated by sitting in a camo lawn chair or even a deer stand. In some cases, it can be difficult to see an entire field when you are sitting on the ground. If you go the lawn chair route, set it farther back in the woods than you would sitting on the ground. That will give you better cover from a tom’s keen eyes. Deer stands are awesome if you are hunting at the top of a ridge, because you can see what’s going on down below…it’s also a good way to spot morels, so you leave the woods with a bird and hat full of mushrooms.

I’ve hunted multiple small farms and the amount of human foot traffic one gets has been a major determining factor in whether I killed a bird or not. If possible, you need to stay away as much as you can, which is an issue at our family farm. It’s a place for kids to fish and play in the cricks just as much as it is to deer and turkey hunt, which makes it harder to punch a tag, though we get to spend time with our children in the outdoors. There’s too much noise in certain areas, so I go to places that aren’t frequented by the squeals of kindergarteners. And I see more wildlife and hear more gobbles in these places. I don’t think that’s a coincidence. Think about how quietly the animals move about your property. You need to do the same, and hunt in secluded places to maximize the chances of tricking a tom in close.

If you strike up a gobbler and it evades you, don’t go back to that same spot the next morning, unless you think there are multiple turkeys using the area. If a tom busts you, back out and give it a few days. The likelihood of you killing that bird the next morning is low; the likelihood of you over-pressuring that spot and ruining it for the rest of the season is high. I’ve had plenty of birds get close and then decide something’s not right. Or maybe it henned up before getting to me. Your tendency may be to think “I almost had that gobbler, I’m going right back there in the morning.” I’ve had that same thought and gone ahead and done it. But every time the result has been the same: me sitting there listening to a few faint gobbles on property I can’t access.

If there aren’t turkeys roosting on or close to your property, there’s not much of a reason to get out there 30 minutes before sunrise morning after morning. Go out that early a time or two so you have an idea where the turkeys are, but then sleep in. I like to get started between 7:30 and 8 a.m. By then, much of the gobbling has quieted down (and I don’t have to listen to a bunch of birds I have no shot at killing). Toms have likely found their first hen of the day, and are looking to eat or find a second hen. It’s the ideal window for you to get on a gobbler.

Read Next: Should You Shoot Jakes This Spring? (and Other Things to Consider During a Coronavirus Turkey Season)

I like to use a mouth call and slate call. It sounds like there is more than one hen and you never know what sound might fire up an individual gobbler. Maybe he likes soft clucks, loud yelps, purrs…I try to make a variety of calls. If a tom gobbles, I sit tight and call every 10 minutes. There’s no timetable for how fast or slow that bird is going to make it to me, but typically if a bird gobbles reasonably close after 8 a.m., it’s coming. What’s likely going to happen is he will gobble once or twice, then you keep making yelps every 10 minutes, and when he’s close he will gobble again (which will get your pulse racing and body shaking), hoping to garner a response from a “hot hen.” He also might never gobble again and come in silent, so be ready. Do not get up and chase that bird unless he keeps gobbling at a distance and won’t come closer.

5. Scout More Than You Hunt

I’m always scouting. That could be sitting on the porch with a pair of binoculars and a beer, driving the perimeter of the property (and neighboring properties) in my truck, or sneaking into a bottom in the evening with a box call to try and locate a bird along a fenceline. When birds aren’t roosting on your land, it’s important to know where they are going, so you have an idea of where to set up the next day.

On a small farm I hunted years ago, there was a big stand of evergreens turkeys roosted in each night on a neighboring property about 300 yards away. I was obsessed with knowing what those turkeys were doing every morning. Before my season started, I would sit as close to the property line as I could to see which direction birds would walk once they pitched down from the roost each day. If they went away from me, I knew there was another spot on the property I could call to them from without trespassing. If the birds came toward me, then I would stay put. You have to know the habits of birds, and have a plan. Know turkey patterns and general areas they want to be in, or at least travel through and you’ll have a better chance at a spring tom, no matter how small your property is.