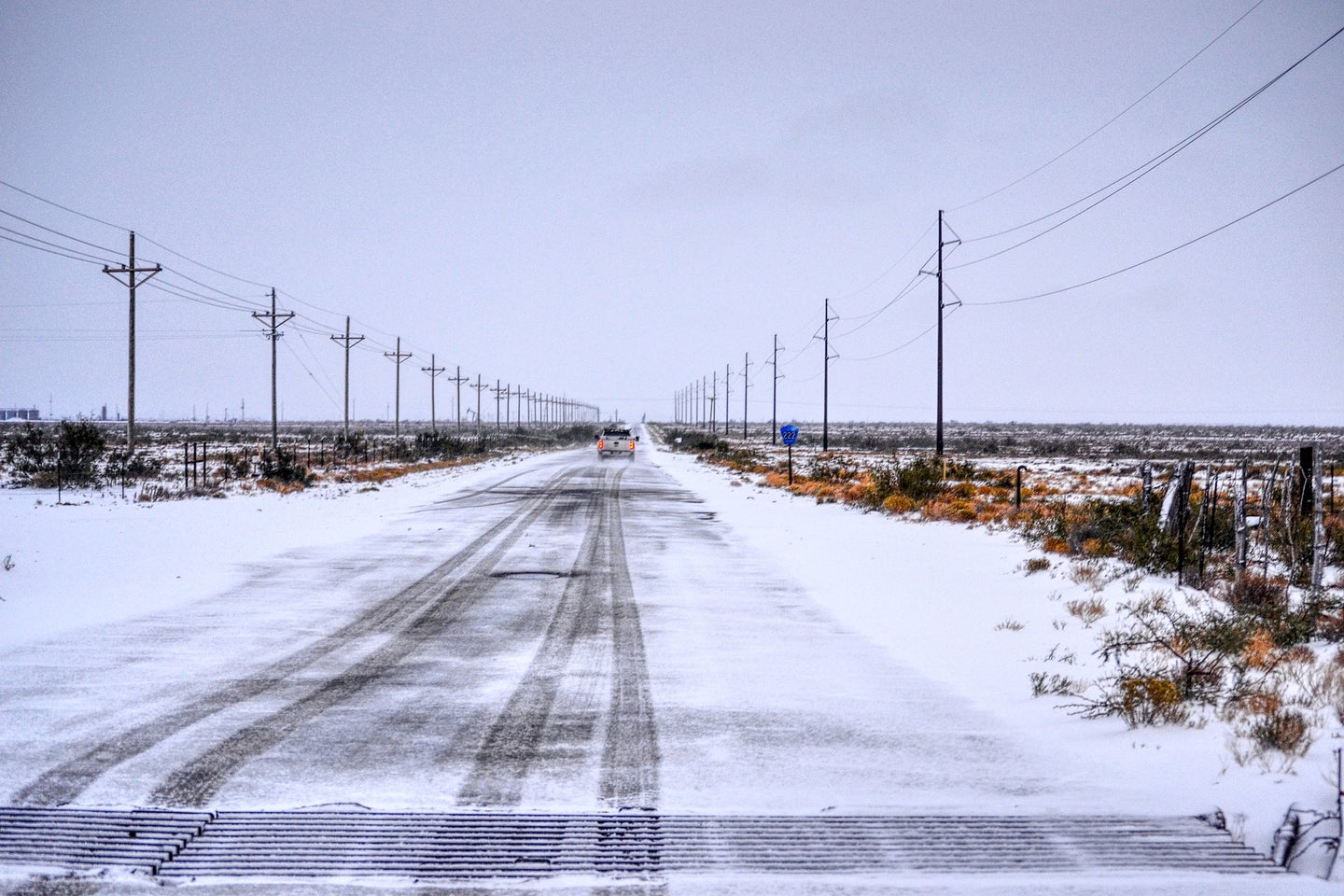 Be prepared this winter when you're on the road by keeping the right supplies in your truck. Pixabay
SHARE

The old straight-six engine finally quit turning over shortly after midnight. The battery was sucked of its last cranking amperage by churning that motor over at negative 30 degrees in one hopeless/last attempt to get it to fire. It was no use. I had no cell phone, and it was too far to walk. Fortunately, being out predator calling on the crisp, moon-lit night, I had all my winter clothes on, but when you stop moving, the cold starts to slowly seep through. I was a cheechako (a greenhorn kid in Alaska) at the time, and although I wasn’t in a remote spot, it was far enough away from home that I would get a healthy dose of cold-weather education that night.

My truck’s engine would not start, but I had what I needed to start a fire, and spent the entire night alternating between gathering wood and huddling around the small blaze. It was an exhausting process, but kept me warm (and occupied). After about eight hours, someone happened upon me—luckily with a bottle of HEET—and we were able to jump-start the truck. My short misadventure was over. It was my first real brush with dangerous cold, and it taught me a lesson that I always needed to be prepared.

Living in Fairbanks, Alaska, will give you an education in cold weather. Temperatures sometimes plummet to negative 50 or colder. Hunting, trapping, or adventuring in interior Alaska during the winter is hard on equipment, and anything that can go wrong, will. Hell, just getting your truck started in the morning can be a chore if you don’t take the proper precautions. And winter weather can be deadly if you aren’t ready for it. A simple vehicle breakdown can quickly devolve into a desperate survival situation. In Alaska, you must live in a constant state of preparedness.

If you live anywhere the temperature plummets below freezing, you need to have a winter survival kit in your truck. From staying warm to firing up your engine when there’s no chance help is coming, here is what you need to keep in your cab this winter.

The most common problem that vehicles in extreme cold have is not starting. Fuel doesn’t vaporize or ignite as easily at colder temperatures, and when your engine and oil are cold, it takes more energy to crank the engine over, and your battery will die more quickly when it’s cold. Even at temperatures as high as 20 degrees, engines take on increased wear from “cold starting,” and at a certain temperature, your engine simply won’t turn over unless it’s kept warm. The most common solution to this problem is to install engine block, oil pan, and battery heaters (if you move to a place like Fairbanks you’ll need them). The heaters are plugged in via an extension cord when the vehicle isn’t being used. In a pinch, some folks have been known to use a pan with hot charcoal briquettes slid underneath the engine on the ground, and a blanket draped over the hood to try and contain some of the heat until the motor will start. Bush pilots used to use Sterno to preheat their airplane motors. Naturally, coals, or an open flame directly below a gas or diesel motor present a risk of a catastrophic fire, and I wouldn’t recommend it unless absolutely necessary, and you know what you’re doing.

Sometimes preheating just isn’t an option, but most vehicles will start if the battery has enough juice to crank the motor long enough, and the battery is often the cause of a non-starting vehicle in the cold. Sometimes the cold itself is the reason your battery might not be performing properly. If you can jump-start your rig, often, that’s all it takes to get it running. Even if it’s not best to start an engine without pre-warming it, running is running.

Whether in your truck, or in the field with your ATV or snow machine, it always pays to have a battery jumper pack. They are available in a wide variety of sizes, and some, like the Zeus from Uncharted Supply Co., are very compact. If you leave them fully charged, they usually withstand the cold very well and have plenty of power to get you up and moving if your vehicle battery is struggling.

Moisture in your fuel is another common culprit of engine trouble in cold weather. Sometimes there might be moisture in the fuel when you buy it at the pump, but it can also get into your fuel through condensation in your fuel tank, particularly when temperatures fluctuate from freeze to thaw. Also, if you keep your rig in a warm garage at night, then drive out into subzero temperatures each day, condensation can accumulate inside your fuel tank. If enough moisture makes it into your fuel lines, it can make your vehicle run poorly, or freeze in the fuel system, preventing your truck from even starting.

A simple fix to this issue is to regularly treat your fuel with IsoHeet, which acts as a fuel system antifreeze. It’s safe to use in two- and four-stroke motors, and will prevent or remedy a fuel system freeze-up. You should always have an extra bottle in your vehicle.

One of the most dangerous situations you can encounter with a vehicle in the winter is a breakdown at very cold temperatures. It’s easy to take your truck for granted, and often, people will tend to dress to stay comfortable in a heated vehicle. But should your rig break down in subzero temperatures, it will get very cold, very fast, and if you’re not able to receive immediate help, it can be deadly.

At a minimum, you should have a cold weather coat, pants or bibs, a hat, and decent gloves. Ideally, though, you want to have the same gear that you would be wearing if you were planning on being outside for an extended time in those temperatures. You may be sitting waiting for help or outside working on your vehicle. Either way, you need to be able to stay warm.

The first thing you’ll hear from any old-school mechanic is that modern vehicles are a nightmare to work on, and obviously each person has a different level of aptitude when it comes to turning wrenches. But it never hurts to have a set of sockets, wrenches, screwdrivers, and a few other random tools in the cab of your truck that can help when an engine won’t fire. One common cold-weather failure is a serpentine belt, which will instantly put you out of commission. If you carry a spare, and (depending on the vehicle), a cheater bar to loosen the tensioner, it can be a cold but brief inconvenience. For ATV’s and snow machines, a small tool kit will usually suffice, but for a car or truck, it’s nice to have an organized tool pouch like the Pangolin Tool Roll from Step 22 to store your tools and other emergency items and keep them easily accessible.

You don’t have to live in an ultra-cold climate to deal with slick roads, and conditions are often the most dangerous when the temperatures are at or just above freezing. Whether it’s sliding on a slick corner or pointing your truck into the ditch to avoid hitting a moose standing in the middle of the road, you will probably get stuck eventually.

You must keep a tow strap, or two in the truck. They are cheap and easy to store under your seat or in a tool kit. Having one makes it much easier for someone to help pull you out of the ditch, or help you pull someone else out. Another good item to have is a set of tire chains. You might not be able to get your chains on when you’re stuck, but when presented with rapidly deteriorating and slippery road conditions, you can chain up and get where you need to go safely.

If you have the storage, traction boards by Maxtrax are an awesome tool for getting yourself unstuck. Designed for mud and sand, they also work great in snow and can also function as a shovel. If you can get the boards jammed in front of your wheels, they will grab hold of the treads and you’ll be moving, even in snow up to your bumper.

For as cheap as they are, road flares are incredibly useful, and you should always keep some in your vehicle tool kit, or in your gear box when you’re out on any ATV or snow machine trip. They are easy to light, weather-resistant, and designed to burn for several minutes. For some applications, you can even cut them down to half or a third of the size and seal them back up with hot-melt glue and tape for a more compact flare.

The intended use for flares is to create a visible notification to passers-by that something is going on that needs their attention. It’s always a good idea if you’re stuck on the side of the road, changing a tire or working on the engine, to put flares out to avoid being run over. They are also a great emergency signal if you are in the backcountry. Incidentally, they make a fantastic fire starter too. Even when you lose dexterity in your hands due to the cold, flares are easy to light, and they burn long and hot enough to reliably get a fire going. If you get stranded even a little off the beaten path, the heat from a fire can make all the difference in the world.