The new F-150 looks good on paper, but only time will tell if it’s a viable option for outdoorsmen 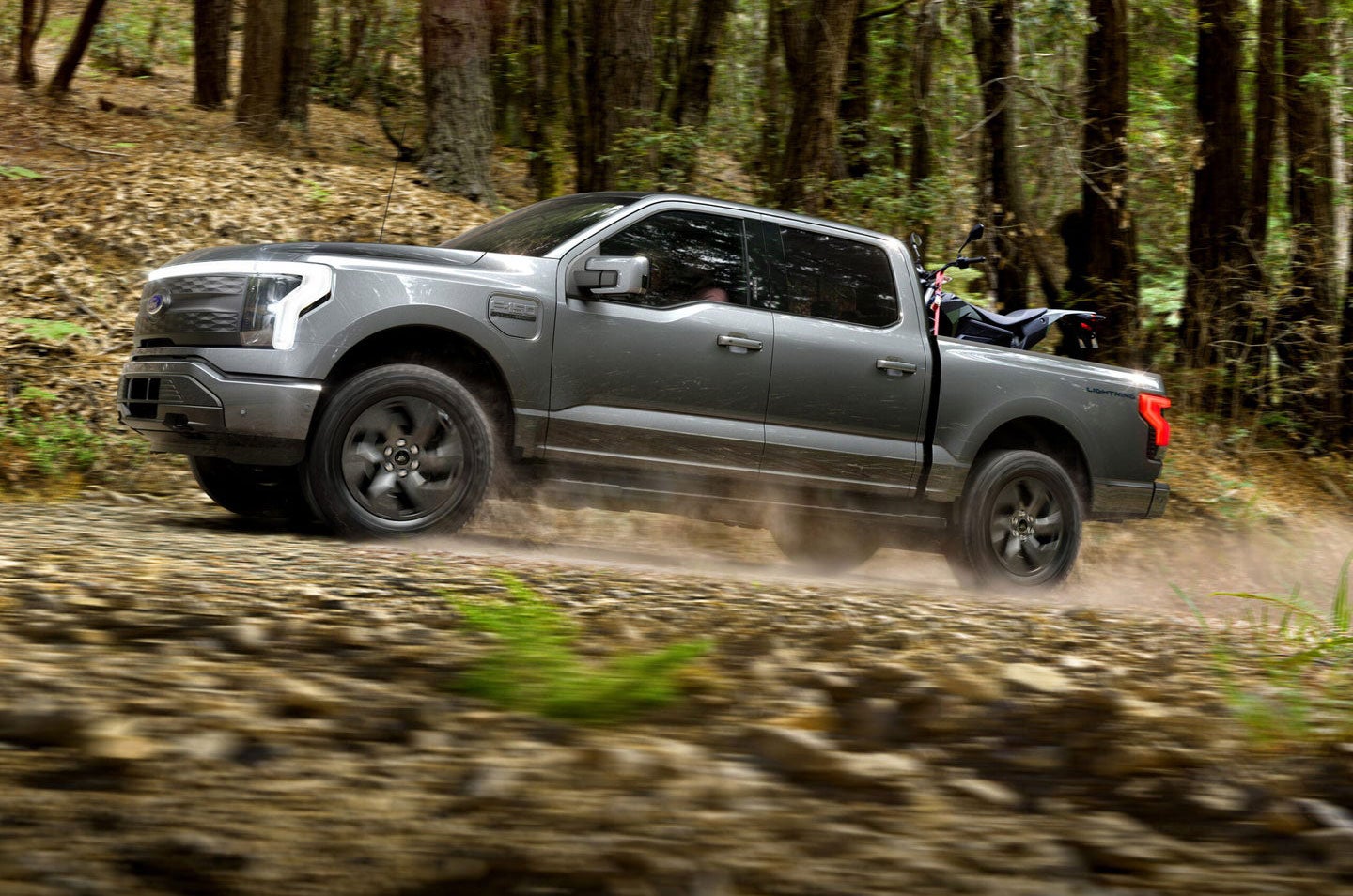 Ford’s F-150 has long been the most popular vehicle in the U.S. The truck just took a huge step forward in terms of zero-emissions transportation with the recent release of the all-electric F-150 Lightning. But how will a truck that can only run 230 miles per charge perform for hunters and anglers?

Is an electric truck capable of taking us into the backcountry, or even the back 40? I haven’t had a chance to drive the new Lightning yet, but have been testing trucks and SUVs for years, and can tell a lot about the makeup of a vehicle just by looking at the spec sheet. So let’s see if the Lightning is worth your money.

First Look at the Spec Chart

Those of us old enough to remember where the Lightning badge came from will immediately want to know if the truck deserves to share its name with the revered SVT F-150 Lightning produced from 1993 to 1995 and again from 1999 to 2004. Numbers don’t always tell the whole story, but the electric Lightning’s maximum 563 horsepower and 775 pound-feet of torque with the extended-range battery are enough to get my attention. That’s 163-horsepower and 365 pound-feet of torque more than you’d get from the current 5.0-liter V8 model and a far cry from anything today’s six-cylinder F-150s are capable of—with or without forced induction. The standard battery is nothing to scoff at, either, generating 426 horsepower and the same 775 pound-feet of torque.

All that power will take you 300 miles with the extended-range battery or 230 miles if you opt for the standard battery. If I were planning hunting trips in remote locations and austere weather (and I am), I’d certainly want all the range I could get. Of course, that decision would have nothing to do with the extra horsepower. It’s strictly a safety concern.

The electric F-150 weighs about 1,000 to 2,000 pounds more than its gas-powered counterparts at an eye-popping 6,500 pounds. That’s Super Duty F-350 territory, folks. As long as you stick to the pavement, the Lightning’s electric motors can handle the extra pounds. It’s once you venture off-road that you’ll need to be mindful of the truck’s weight. Soggy fields and trails could be problematic for such a heavy vehicle. Choose your aftermarket tires carefully.

Charging times for the Lightning will vary wildly. That’s true for all electric vehicles and not a challenge unique to this truck. The smallest mobile chargers can increase the F-150’s charge from 15 to 100 percent in about 19 hours for the extended-range battery or 14 hours for the standard one. The fastest option is to use a 150-kilowatt DCFC charger to raise the charge from 15 to 80 percent in 41 minutes for the extended-range battery or 44 minutes for the standard-range battery, surprising since it won’t take you as far as the extended range. If you’re worried about where you will charge the truck, apps like PlugShare are great for researching your local charging options or for planning longer trips.

Is the Lighting Built for Hunters?

It’s simple: hunters rely on pickups. We need ample cargo room for gear, an open bed that can be rinsed out after we skin a deer, four-wheel drive do get us down muddy two-tracks, and plenty of ground clearance. The F-150 Lightning retains all of those things. It offers the same 5.5-foot bed as gas F-150s, though if you like putting a topper on your truck so you can sleep in the bed, you’ll likely have to do so with the tailgate down. The four-door cab offers seating for five. F-150s are known for their spacious back seat, something you don’t always get with other truck brands. A pair of electric motors sends power to all four wheels. Metal skid plates protect the skateboard-style battery, so clearance shouldn’t be an issue.

Towing is a definite bright spot for the electric F-150 with a max tow capacity of 10,000 pounds. The best-equipped gas-powered F-150 can only manage an 8,500-pound tow capacity, so the only way to get more pulling power from a Ford is by upgrading to the Super Duty. But remember, the range of the Lightning will be significantly reduced when towing. By how much remains to be seen.

One of the most obvious advantages of this truck for hunters is its lack of engine noise. The rumble of a diesel—or even a standard gas engine—in the woods can spook game. You can definitely park closer to the deer stand in the Lightning.

This vehicle will serve public land hunters and trail riders well too. Many public places have banned any vehicle that runs on gas, and if you don’t expect to see more strict regulations for all internal combustion engines in the coming years, I think you’re fooling yourself. Unless you have access to  private land, there may come a day when owning an electric vehicle will be necessary to drive deeper into public hunting areas.

The Pros of the F-150 Lightning

At first glance, there’s plenty to like about the F-150 Lightning.

First are the truck’s capabilities. I was an EV skeptic for a long time. I liked my V8 because of its power. I also liked four-wheel drive because it saved my ass more times than I can count. But, electric motors aren’t just for gas-sipping hybrids. They’re producing supercar horsepower figures, including torque numbers you’d expect from a big green tractor, plus more storage space than a minivan—there’s trunk space under the hood of the Lightning because there’s no engine. Not only can the F-150 Lightning carry all your gear, it can keep electronics charged with its myriad of outlets. Imagine being able to run a mini-fridge instead of packing another cooler. During a power outage, this F-150 can even reverse the flow of electricity to power your home.

All those advantages come from a brand we already know and trust. There are more EV startups and concepts than I can keep track of, but what they don’t have is the enormous support structure of Ford Motor Company backing them up. It’s nice to know that when you buy an F-150 Lightning you’ll have Ford’s reliable service and support at hand.

The Lightning is affordable as well. It’s not another luxury item like a Tesla or the coming electric Hummer. Ford lists the entry-level Pro model at a starting MSRP of $39,974. Factor in federal incentives for electric vehicles, and you’re looking at $32,474. State and local incentives can reduce the costs even more. Don’t forget that oil changes, tune-ups, and most other regular maintenance will be a thing of the past with an EV. Yes, moving up the food chain gets expensive, with the top dog model exceeding $90,000, but consider the gas-powered F-150 Limited starts at $70,825.

For comparison, the base model F-150 XL starts at an MSRP of $28,745. A four-door cab like the one on the Lightning will bump the price up to $35,285. The optional 5.0-liter V8 is the closest you’ll get an XL to the Lightning’s power output, and that moves the price even higher to $38,975. At that point, you’re still looking at a rear-wheel-drive truck. Sending power to all four corners will leave you with a grand total of $42,485. The Lightning saves you more than $10,000 before you even drive off the lot.

Why You Should Be Skeptical About This Truck

The infrastructure needed to support mainstream EV automobiles is taking shape, but it’s still nothing like the existing network of gas stations. Currently, the U.S. Alternative Fuels Data Center reports 42,307 electrical vehicle charging stations across the country. Ford is adding thousands of its own charging stations to support EV customers. But, it’s far fewer than the number of gas stations we can fill up at. Hunting takes us away from populated areas by nature, so expect electrical charging support to get even more scarce the further you drive from urban areas.

Factor in the length of time it takes to recharge a vehicle compared to a conventional fill-up, and keeping an F-150 Lightning on the road starts to look a lot less convenient. Depending on where you live, rapid charging stations may not even be an option. What you can do, though, is charge your truck at home. It will be a time-consuming process, but if plugging your F-150 in every night is the price you pay for never buying gas again, it might be worth the trouble. The main issue remains that there aren’t going to be a plethora of charging options (if any) once you get into the wilderness.

Off-road performance is another question mark. Just as fuel consumption increases when your truck goes off-road or is towing a trailer, expect electric mileage to take a hit. Extreme temperatures can reduce battery life even further. Curb weight becomes increasingly important once you leave city streets behind—that’s why Jeep trails are primarily occupied by, well, Jeeps and not full-size pickups. It will be interesting to see how the truck performs once the high-efficiency factory rubber gets swapped out for the kind of aftermarket tires hunters and off-road enthusiasts actually use on trucks. The F-150 Lightning could be a serious off-road contender, but it hasn’t proven itself yet.

Finally, long-term reliability is untested. This isn’t normally an issue because vehicles pull so many components from previous generations. The F-150 Lightning, on the other hand, shares so little with its gas-powered counterparts that it’s closer to being an all-new new machine than a trim level. Fortunately, Ford is supplementing its existing warranty with an eight-year, 100,000-mile warranty on all components that are unique to electric vehicles. That’s reassuring, and should be enough to set your mind at ease.

So, does the F-150 Lightning have what it takes to be your next hunting truck? That depends on how you plan to use it and where you live.

If you want a fast, practical daily driver that can handle weekend hunting trips close to home, this seems like a potential winner. The price, cost to own, performance, storage, and convenience features make this new truck extremely compelling. If you’re looking to replace a focused off-roader that spends more time commuting to the deer stand than the office, it might be wise to wait until EV auto technology becomes more advanced.

For most hunters in populated areas, I think the F-150 Lightning will be a fine fit. It may not be for everyone, but it deserves a test drive, though the sales guy may panic when you take it down a muddy trail. Once the Lightning becomes widely available, we will certainly know more.

If you are interested in learning more about the F-150 Lightning, check out Ford’s product page. You can also buiild your own F-150 online.