Let’s Cut The B.S. Around Bone Broth. Here’s What it is and How to Make it Yourself 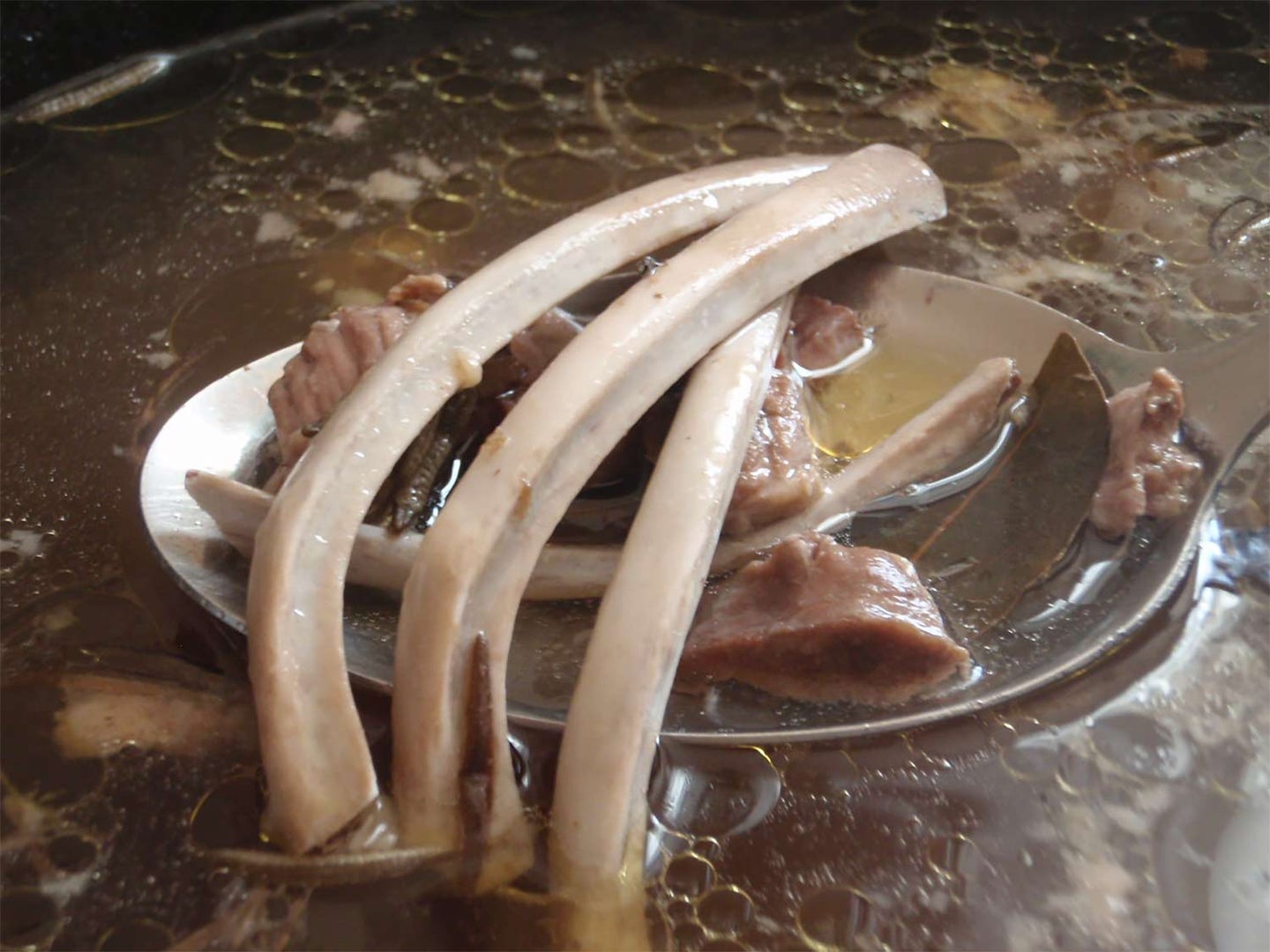 Bone broth is a stock made from bones, water, and many other nourishing ingredients. Tim MacWelch
SHARE

It’s so ubiquitous that your local grocery store now stocks it, and so trendy that complete diet plans are being built around it. But bone broth is more than a traditional food source or recent health fad. It’s also a great way to add more nutrients to your diet in a survival situation. Here’s what you need to know about this ancient superfood and how it can sustain you in the wild.

What is Bone Broth?

While it should technically be called “stock,” bone broth is a nutrient-laden liquid with deep historical roots. A broth is typically made from water and one or more food ingredients. For example, vegetable broth can be made by simmering available plant foods in water without any animal food ingredients. The broth could also be meat based, but the true transition to stock occurs when bones are added (with or without any accompanying meat or vegetables). Like a proper barbecue, these ingredients are cooked low and slow for maximum flavor development and nutrient extraction. In typical usage, broth is lighter and cooked for a shorter period of time. Stock is richer and cooked longer than broth.

How Far Back Does it Go?

I’m confident that this simple “soup with bones” can date back to our most remote culinary traditions in the distant past. Our ancestors first developed large cooking vessels from soft carved stone. A little later, clay pots and other ceramic containers replaced the clunky stone pots and bowls. With the ability to cook food until tender, I’m sure that cooking soup in these pots became the next logical innovation. In the Stone Age and even in recent history, cooking fires were more than just a heat source in our dwellings. These fires gave our forebears a cooking hearth too. Medieval cooks and homemakers were often noted as burning their fires constantly, with a never-ending pot of soup at the ready. When a bowl of broth was taken from the cauldron, a bowl of water and a few more stock ingredients were added to replace that which was taken.

Think of this healthful broth as a survival food (rather than just a recipe ingredient), and you will see that it has many benefits. For example, taking water from a surface source (like a creek) and boiling it to make a soup sock will actually disinfect that water and offer a safe form of hydration. In colder weather, this liquid can be sipped while hot to provide valuable warmth. It’s also a great source of nutrients. Vitamins and minerals abound, though the exact nutritional profile will vary wildly depending on the plant and animal foods that are used (as well as the length of cooking time and the heat). Whichever plants and critters you include, you should expect the broth to contain fat, protein, calcium, magnesium, phosphorous, manganese, thiamine, riboflavin, niacin, vitamin B6, folate, potassium, selenium, copper, zinc, and much more. In the growing movement of health conscious consumers, bone broth is hailed as a mineral source that can help combat osteoporosis. It’s also reputed to support our adrenal glands, relieve arthritis and even fight tooth decay. This broth can also be a natural source for glucosamine, chondroitin, keratin and hyaluronic acid (substances which provide support for our joints, skin, and other useful organs). Let’s face it, most of the commercially available “survival foods” just don’t have a nutritional profile that comes close to bone broth.

Read Next: 13 Gross Animals You Can Eat in a Survival Situation

Which Bones Will Work?

Any productive hunt (or trip to the market) can provide us with the raw bones for this simple recipe. Your successful trapping, fishing, and scavenging activities can also provide bones in a survival setting. While it’s not the most appealing choice, predators often leave the thicker bones (some containing marrow) at their kill sites. When the weather is cold, these bones may stay “fresh” for days. If the weather stays subfreezing, they can last much longer. Just skip the old bones and any questionable sources. When scavenging, bones with clinging rotten meat or a foul decayed smell should be avoided. They should smell as fresh as the meat you would want to eat. Don’t be shy about mixing species, if you like. Throw in some fresh wild turkey bones along with some fish bones, or keep the broth mammalian by blending elk bones with those from a feral hog. Just consider the diseases that your local animals may have before you add certain bones to your food chain. Species that can carry chronic wasting disease and other serious illnesses are best left on the landscape and not dropped into the soup pot. Furthermore, use the bones from healthy looking game animals that you’ve taken and avoid using the bones from sickly ones.

In the old hunting cabin, you may set your Dutch oven and the woodstove and load it up with water, fresh bones, and a splash of vinegar. At home, you can follow a similar course of action. Combine 1 gallon of water, 1 ounce of vinegar and 3 to 4 pounds of bones and tissues in a large vessel. Bring it to a boil and reduce to a simmer. You can also add vegetables, spices, herbs (sage and thyme are excellent), and other ingredients to build more flavor. Keep it going as long as you can safely monitor the liquid levels. These bones can be left whole (if they fit in the pot). They can also be cut with a saw or broken into chunks with a hammer. Simmer for at least a few hours, though 10 to 24 hours would provide the best results. Just add more water periodically (at it evaporates), and stir occasionally. This can also be done in a crock pot, set for 160 F or a little higher. Pull out the liquid by the cupful or strain out the bones.

You Have Options… Use them Wisely

Bone broth is often used as a soup base for more complex soups and stews. It’s also a common cooking liquid (I love cooking greens in it). Yet these aren’t your only choices for use. You could sip it from a mug like a hot beverage. You could also add it to common dishes like sauces, risotto, dumplings, casseroles, beans, gravy, and my personal favorite: stuffing. Not only does it impart a rich flavor, but it boosts the nutrient value of your food significantly. Yes, we should use it wisely, but simply making this liquid food resource is a smart move. If we cooked some meat over an open fire, the precious fat will melt and drip down into the fire. These are vital calories that are completely lost. On the other hand, if we place that meat on the bone in our stock pot, the valuable fat (calories) and many minerals will end up in the soup stock, becoming a liquid meal made from your wild game animals. It’s an excellent way to conserve and use the nutrients you harvest. Broth, stock and soup are also a great way to feed a hungry group and stretch thin food resources.

While this unctuous fluid has plenty of things in its favor, there is a dark side to it. As mentioned, bones can potentially transmit diseases. They can be a source of heavy metals like lead. Since lead is often accumulated and stored in bone tissue, it can easily creep out into your simmering bone broth. Conventional livestock can take on this toxic heavy metal from their food and water. Wild animals can also pick it up. Scavengers often acquire toxic levels of lead from eating gut piles and dead animals which contain lead ammunition fragments. Generally speaking, younger animals will have less lead in their bones than older animals; and wild animals will have less lead in their bones than conventionally raised animals. Lead can cause reproductive harm and gastrointestinal issues, along with anemia, memory issues and depression. Other contaminants may be present in commercial animal food streams and wild game in your area, so do your homework before you include anything into your personal food chain.