The Best Ways to Use Bear Fat

Bear fat will make your pastries taste better and your leather gloves waterproof—and much more. Here's how to use it 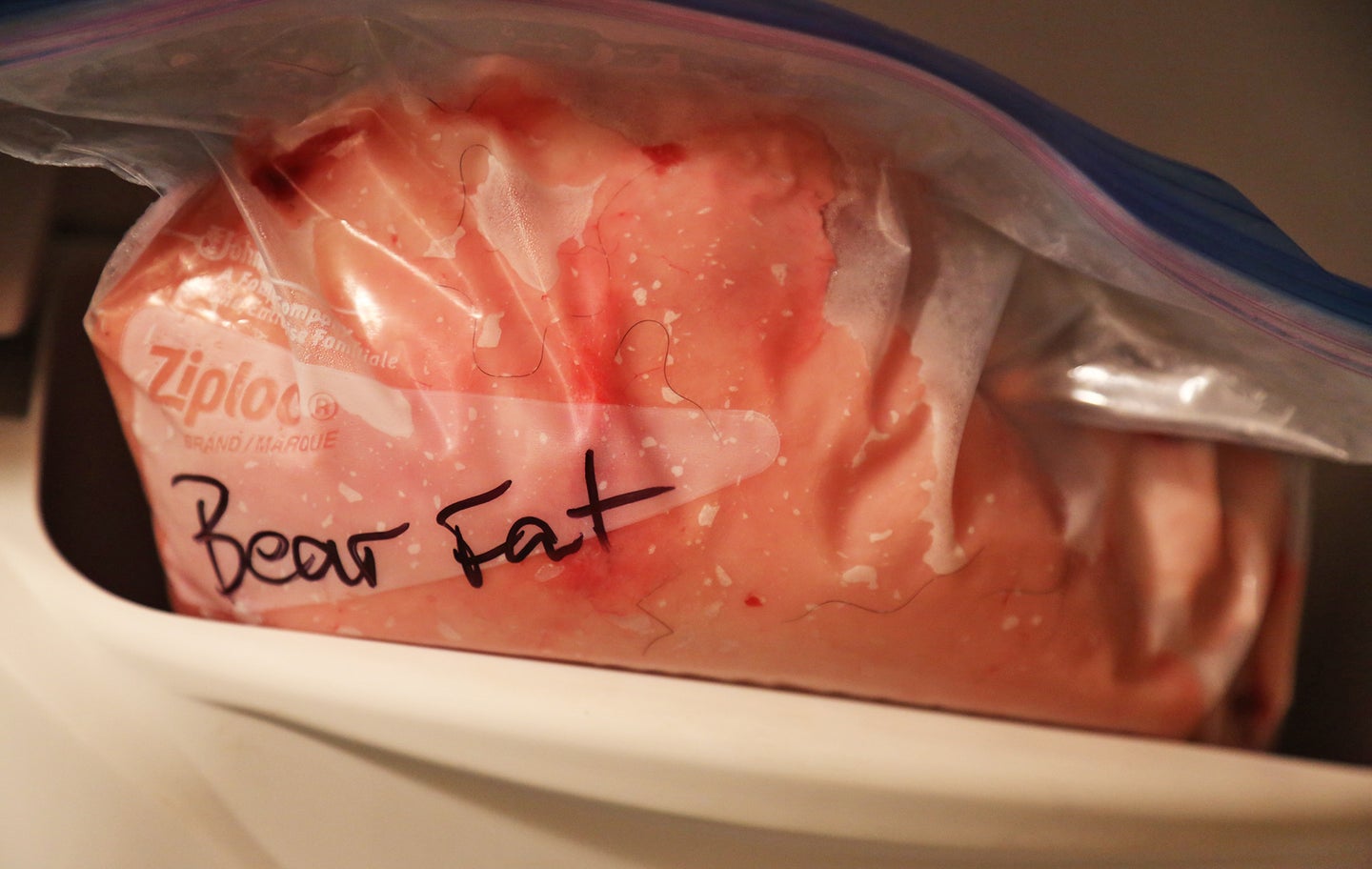 On a black bear hunt several years ago, I spotted the unmistakable frame of a large boar as he emerged from cover on the far end of a vast grainfield. My heart skipped a beat, and I headed to the adjacent farmhouse to ask for permission to hunt. A weathered Canadian farmer met me at the door. He must have been watching from the window because he asked me if I was a bear hunter.

I told him, that in fact I was, and that I’d hoped to put a stalk on the large bruin in his field. Unfortunately for me, the farmer had been watching that bear for two weeks and was hoping to harvest it himself.

The farmer explained that he was the third generation to farm this piece of land and that he tried to put a black bear in the freezer every fall, just like his father and grandfather had. From there, we embarked on a discussion about black bears and how important they were to early settlers in North America.

We talked about the value of fat and proteins and how vital the bear had been in the days before grocery stores. We expounded on the virtues of the mature bear feasting on barley in his field. It would have a thick layer of white fat under its hide, storing up reserves with every bite.

I didn’t get a chance to tag a bear that day, but I’m glad the farmer who did knew all about the benefits of bear fat for hunters. You should, too. We can start by looking back at how the early settlers of North America used bear fat and how many of those uses remain relevant today.

Why Bear Is So Versatile

In many ways, black bear meat, fat, and bones are undervalued. Bones, for example, make a rich broth and could hold healing power. A study of bear bones in Alberta is trying to unlock secrets that could lead to a cure for osteoporosis (because black bears maintain bone mass through hibernation).

The black bear is a powerhouse of nutrient-rich food. Bear meat is highly nutritious, with 155 calories in 100 grams. The same portion offers 20 grams of protein, 8.3 grams of fat, and 40 percent of daily iron needs at 7.2 milligrams. (For reference, beef has 2.6 milligrams of iron per 100 grams).

Then there’s bear fat, which has historically been an essential part of the human diet. It also has medicinal value, can be used for equipment maintenance, and much more.

Bear fat comes in two forms: white fat and brown fat. Brown fat is beneficial to cardiovascular health and can reduce the risk of diseases like diabetes. The white fat stored on a bear is loaded with energy and is the fuel for the bear to make it through six months of hibernation. Here’s how to put bear fat to work.

Bear lard is luxurious, rich, and has a variety of qualities and uses. It’s often called “bear grease” or “bear oil” but it’s really all the same thing. How do you process bear lard? First, you collect fat from a bear and then cube it or grind it to help in the rendering process. Then you render it down; cook it low and slow for the best results and clear oil. More heat will create darker oil. Strain the hot oil through cheesecloth and into jars for storage.

Historically, First Nations people stored bear grease in deer bladders that were scraped and dried. Settlers used jars or refilled lard tins to protect the precious resource. Bear oil has a good shelf life and does not go rancid as quickly as pork lard.

Back in the day, bears were a vital food source. Bear lard was a staple that would help produce meals for an entire year.

Bear lard was used as frying oil to sear lean mean, cook fish, and fry vegetables, potatoes, and oatmeal cakes. Oil adds the magical taste to the Maillard Reaction, better known as browning. Most of us cannot imagine a diet of bland food if we could not fry.

The lard was often used in place of butter. Many old trappers stirred some bear fat into their coffee to take on extra calories to stay warm during the winter. It was a crucial ingredient in making biscuits and as a topping before adding preserves. We may have non-stick pans today, but imagine trying to make pancakes in an iron pan without some form of grease.

Pastry chefs regale the benefits of bear lard for making rich and flaky pastry. It is considered liquid gold by chefs wanting to make the best possible dishes for special meals or competitions.

First Nations people used bear grease to condition leather. Clothing and drums were made and maintained utilizing bear fat. Modern sportsmen and women can use bear grease to waterproof boots and leather gloves. Besides preventing moisture from getting through the leather, it also conditions it for longer life and durability. Simply apply with a cloth and work it into the leather to the edges. Use a hairdryer to heat the grease for better absorption.

Leather or canvas scabbards can be treated with bear grease to make them waterproof and extend their lifespan. Upland hunters who use leather chaps can use bear grease to keep their leg protectors in tip-top shape without a funny odor.

The Lewis and Clark expedition went through gallons of bear grease and used it for equipment maintenance (along with cooking). There was no gun oil or WD-40 in those days, and preventing corrosion on metal was critical to long-term survival. They seasoned knives and firearms with bear grease. Today, bear grease is still an excellent option for protecting and seasoning gun barrels and moving parts. Traditional muzzleloader enthusiasts use bear fat for protecting guns, lubing a patch, or as original bore butter or grease. You can work bear grease into a knife blade to ensure it will stay rust-free and in perfect working order the next time you grab it.

Use bear grease anywhere you use dubbin, wax, or other waterproofing material. It’s an inexpensive alternative with superior qualities that proven over time.

Bear Fat for Health and Wellness

Fat, grease, lard, or whatever you want to call it, is a powerful moisturizer. Most outdoorsmen carry lip balm to prevent or treat cracked, dry lips. What did people do before commercial lip balm was available? They used fat.

Utilizing bear oil as an ingredient can enhance moisture and healing qualities. Black Bear Remedies is a modern company that offers health and wellness products made with bear oil. You can order online and have products shipped anywhere in North America. Their lip balm is available with peppermint or coffee flavors.

The company also offers skin care products with bear oil. Insect bites, eczema, rashes, and dry skin have historically been treated or prevented with bear grease. A little goes a long way; rub on a dab to repair skin problems and relieve the itch and sting of insect bites.

Making salve and ointment is another good option. There are plenty of online recipes and directions for creating skin healing products. Herbs and medicinal plants were used in unique concoctions for healing skin ailments. The Boreal Herbalist is a wonderful book with information on native plants that can be used for medicinal or health benefits. Look up plants that can help with what ails you and make a salve with bear fat to heal it.

Some in the holistic medicine community believe that bear fat can relieves pain, reduces stiffness and swelling for Arthritis, back pain, carpal tunnel, Fibromyalgia, minor nerve damage and much more. Applied on its own or used in conjunction with herbal concoctions, anyone suffering from aches and pains has nothing to lose by trying bear grease.

Bear fat makes for luxurious soap. Saturated fats are known to increase a soap’s lather. Unsaturated fats deliver moisturizing and nourishing properties. Use a crockpot (outside your home) to make a batch of bear soap for yourself. You will need to look up recipes to find the correct amount of lye and the right combination of essential oils for the aroma. Basil, mint, cloves, and other herbs can add medicinal or therapeutic value to homemade bear soaps.

In case you haven’t noticed, beards are in style these days, making beard wax big business. Back in the old days, bear grease was one of the original North American beard oils. Add cedar, mint, or other essential oil to help you smell as manly as you’ll look.

If you still aren’t sold on bear fat, let me illuminate one more example for you: Oil lamps can be fueled with any fat or grease. Sure vegetable oils can get the job done, but bear fat has long been known in the backcountry as the bright light when the sun goes down. If you have an abundance of bear fat, oil lamps can be used to light up your hunting camp.

Bear fat has proven its value throughout history. Modern hunters can embrace the old ways with new while experimenting with new uses for this incredibly versatile .