Stay aware of the changing weather, and prepare as best you can 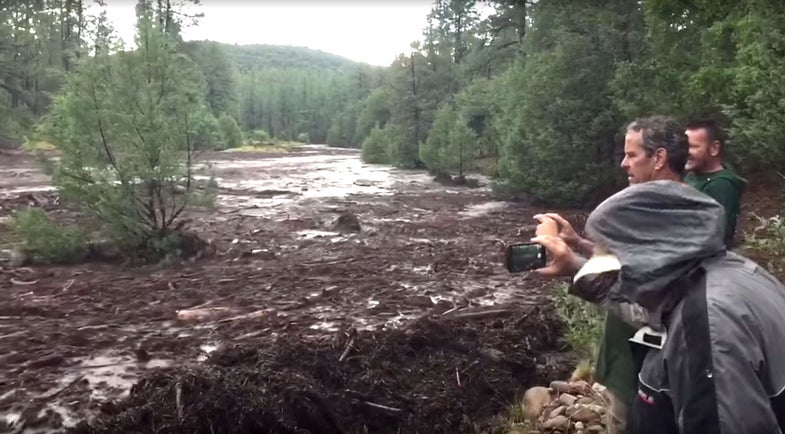 A very sad story comes to us from the Tonto National Forest, north of Phoenix, Arizona. Nine people, mostly children, drowned on the afternoon of July 15 after a flash flood ripped through the Cold Springs swimming hole beside the East Verde River. At the time of writing this, a 27-year-old father from this group is still missing. Reports say that the flood waters were swift, rushing over 30 miles per hour, and laden with char and debris.

According to MSN, a spokesperson for the local sheriff’s department said that the victims were all members of a group of 14 family and friends from Phoenix and Flagstaff. One eyewitness reported that the flood waters (caused by heavy rainfall in a nearby area) were black, laden with wood and branches from a nearby burned area.

This heartbreaking event is the deadliest single flash-flood event in the U.S. since the September 2015 flash flood near the Utah-Arizona border, which took 20 lives. The National Weather Service reports that more than half of the fatalities attributed to flash floods occur when people are swept away in their vehicles while attempting to cross flood waters. The agency gives the advice “Turn Around, Don’t Drown” for flash floods, suggesting that drivers find another route rather than trying to cross the water. But for those who are caught in a flash flood in the wild, they often have no warning or time to react—and few choices to get away.

Flooding can occur slowly and predictably due to known rainfall or snowmelt, or it can happen in the blink of an eye as a violent and unforeseen flash flood. Floods normally take more than 6 hours to occur. Flash floods, on the other hand, can happen in a much shorter period, due heavy rainfall, dam or levee failure, or the sudden release of water from an ice-jammed river. Flooding is the chief cause of death associated with thunderstorms, accounting for more than 120 fatalities each year in the U.S.

More than half of these losses occur when vehicles are driven into dangerous flood waters, especially at night, when visibility is hampered.

A flash flood is always a possibility in certain types of terrain, and during certain seasons. This form of rapid flooding often occurs in low-lying places, such as slot canyons, washes, dry river beds, and basins. This event may happen due to heavy rain at a higher location, the collapse of an ice jam in the spring season, or the failure of a man-made structure like a dam. Keep these tips in mind to keep yourself and your family safe from this calamity.

Do you live in an area prone to flash floods? Are you ready to make the right choices when confronted by one? Please leave a comment.

Our sincerest condolences go out to the families and friends affected by this tragic loss of life.