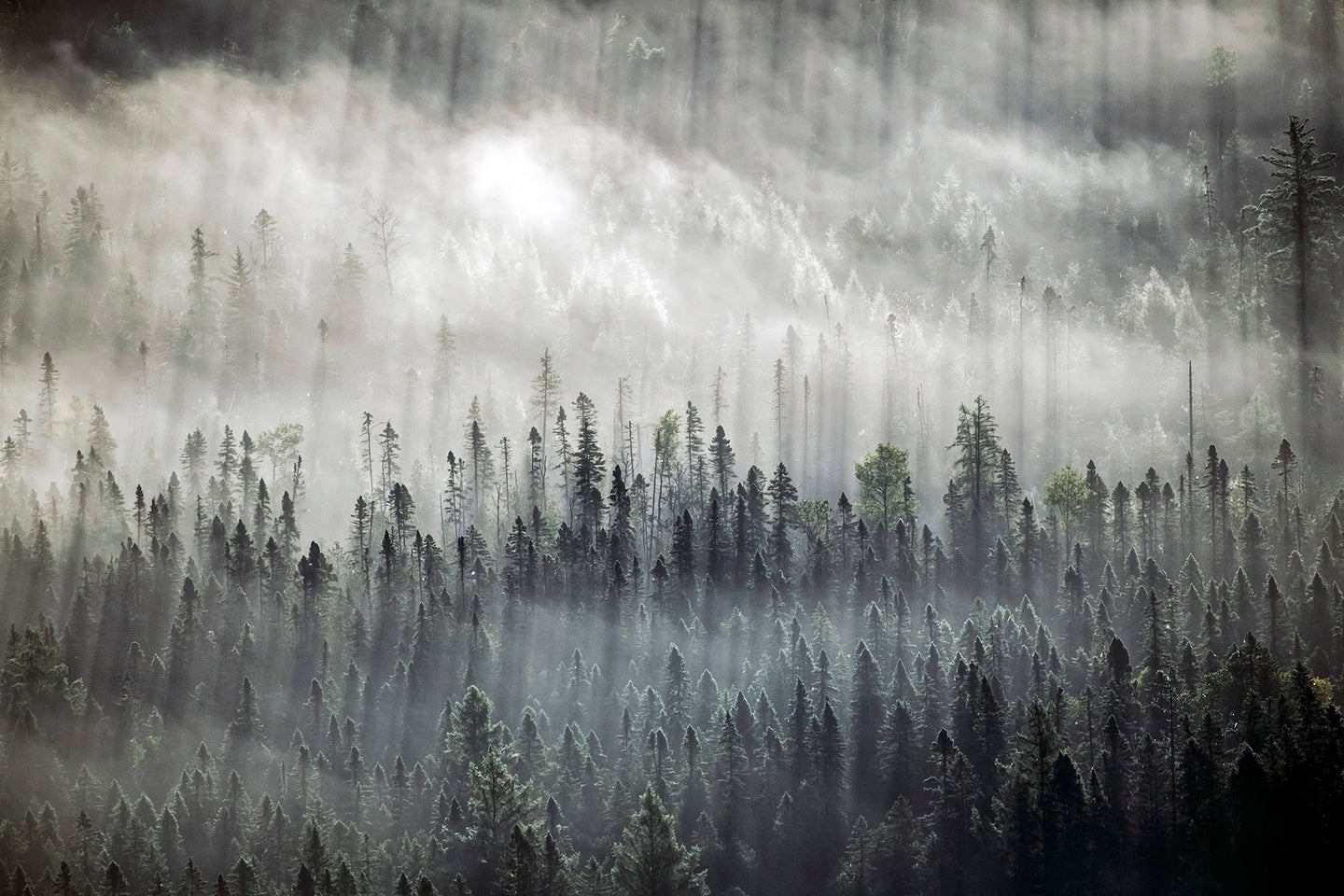 It's easy to get turned around in the woods, especially if you're on the trail of game animals. John Hafner

When a Lost Kid Wanders into Your Hunting Camp

A kid walks out of the night and into your camp—lost, scared, and half-frozen. Would you know what to do?

THAT SEEMS OUT OF PLACE, I thought to myself as the crack of a rifle ripped through the night air. There was another shot immediately after and not far from me. Gunfire is a common sound in the mountains of central Idaho during the October deer season, but only during daylight hours.

The last rays of shooting light had long since filtered through the poplars, and the stars were now bright in the sky. I paused for a moment, then went back to rummaging through the bed of my truck as I set up camp for the night. Maybe someone just wanted to hear the gun go off? Anyway, I was too worried about getting dinner ready and finding my extra jacket to dwell on it for long. It was cold.

I had arrived on the mountain before sunup to spend the day mentoring a friend and his two kids on the basics of deer hunting, and I was planning to sleep in my truck and do some hunting for myself the following day. It had been tough going. Some years back a wildfire had ravaged this area, but now the landscape was covered in an almost impenetrable sea of snowbrush and other shrubs. Hunting in this kind of mess is not my forte. It was hard to see and harder to get around. What it would not be hard to do, I noticed several times as I spun in circles looking for the kids in all that tangle, is get lost.

The place I had picked to camp was on a Forest Service road a good hour from the nearest town. Well into the night, with my rear end sticking out of the tailgate as I got my bedding together, I expected to hear the familiar music of the mountains—the yip of a coyote sniffing out a gut pile, or the wind beginning to kick up as it rocked the truck and sent the nearby spruce trees wagging.

Instead, I heard a frail voice: “Can you please help me?”

I emerged from my truck to see a boy of about 15 standing there, looking scared. Apart from the rifle on his shoulder and the Buck knife at his belt, this kid was dressed more for a pizza party than for a night in the mountains, where the temperature was rapidly plunging into the low end of the 20s. Thin cotton shirt, jeans, and sneakers. No pack, no flashlight, nothing. He had simply materialized out of the dark like an apparition. I’m embarrassed to admit that my first thought was that someone was playing a prank on me.

“I got lost,” the kid—I’ll call him Jake—went on, sniffling in the cold as he looked at me in the dim light of the tailgate. The desperate look on Jake’s face, rather than any savvy on my part, shook me out of my suspicion. This was a remote spot, and there was only one other camp I’d seen, but it was close by and had a fire going.

“All right,” I said, taking him by the shoulder. “I don’t know these guys over here, but we’re gonna go get you warmed up.”

Ten minutes later, Jake was by the fire, clad in a heavy sweatshirt. His attention was now focused on a fully loaded baked potato that one of the hunters from the camp we’d just joined had obviously been looking forward to. But the hunter had offered it up with no qualms once he saw the half-frozen and still-shaken boy in the flickering firelight.

Fed and thawed out, and seeming to recognize that he was now safe despite being surrounded by strangers, Jake relayed what had happened. He had been hunting with his father and little sister somewhere down the mountain. They’d spotted some does—legal game for a youth hunter in this area—and he had chased them through the brush. And as can happen to any of us, he became so preoccupied with the pursuit that he lost track of where he was. When he stopped to look around, he realized he’d been separated from his family. In the excitement, he had also left behind his pack, which contained his phone, extra clothes, and other critical gear.

So there was Jake, recognizing that he was lost and alone in the fading light of that shrub-choked country with shoots of undergrowth snaking well above his head and no way to tell which direction to go. The surrounding terrain was made up of canyons that dropped steeply only to rise just as steeply again.

That Jake even found the Forest Service road still seems like a miracle. Someone apparently passed nearby on a UTV before the sun winked out, and he was able to follow the sound. He assumed it was the same road his family was camped on, and he started walking in what he thought was the right direction. The two shots I had heard earlier, it turned out, were Jake trying to signal for help. He had fired them after walking for hours. Those hours were scary for Jake, and no doubt a time of sheer terror for his father, who must have been in a bad way even as we all sat there listening to his story.

Two of the hunters from the camp volunteered to drive the road and look for Jake’s dad. I was the only one in the group with any kind of satellite communication device, and after some deliberation I told Jake to go ahead and send his mother a message on my Garmin inReach to let her know he had gotten lost but was now safe and sound. This was a one-way ticket to the doghouse for his dad once all was done and dusted, but it seemed the only thing to do. After losing track of a kid for so long in the mountains, especially on a night as cold as this one, it was likely that his dad had gone into town to get help from a search and rescue team. Someone in cell range needed to know Jake was OK.

About an hour and a half after the other hunters had headed out to find Jake’s dad, the headlights of their pickup rounded the bend back to camp, and three shadows stepped out of the truck instead of just the two that had left. The whole group expected one of the figures to break out in a run toward the fire to pull his son into a relieved embrace. But that’s not what happened.

Jake’s father came forward, put his hand on his son’s shoulder, and gave a kind of “Well, I guess we’d better get going” comment that would have been a better fit if he’d been picking his boy up from soccer practice. This struck me as a bizarre reaction at the time, but I realized later that the man had just had a 45-minute truck ride to process that his son was safe. After a scare like that, any number of things could have been running through his head.

Jake’s dad had been 8 miles down the mountain, searching in a confined area in the belief that Jake couldn’t have gone far. With no communication gear capable of reaching the outside world, he had been trying to find his son by himself. Jake might have been found faster if he’d stayed close to where he’d gotten lost, but still. Eight miles. That’s one tough kid.

He was also lucky. If he had walked past the area where we were camped, he would have gotten into a sprawling network of Forest Service roads that all lead to nothing but more wilderness unless you know exactly where to go, and even then it would have been at least a dozen more miles. More than likely, he would have been out all night in the freezing wind. Maybe he would have made it to the morning, maybe he wouldn’t have.

When You Become the Rescue Team

Weeks after the deer and elk seasons were closed, freezers were full, and several feet of snow had piled up over any footprints we might have left on the mountain, I was still thinking about that evening. Should I have reacted to those first two rifle shots? What kind of advice should we be giving to new hunters—especially people with kids—that would help in a situation like that? I had spent the whole day before the encounter mentoring a family with kids who were just learning to hunt.

I got in touch with Scotty Perkins, a wilderness photographer and an officer with the Idaho Mountain Search and Rescue Unit, who has experience in situations like this.

Perkins says avoiding search and rescue situations often starts with good communication devices. Whenever he’s in the backcountry, Perkins has both a satellite communication device, such as a Garmin inReach, and a ham radio. The latter can allow direct voice communication in places that are well out of cell range, but it requires a license to operate legally.

My first instinct is to push back against more tech. Like many hunters, I value the remoteness the mountains offer. Even getting the inReach was a struggle for me, at first. But Perkins is unequivocal. A reliable communication device could save someone else’s life, not just your own.

Jake’s case is special because there was a minor involved, Perkins says. If you encounter a child in a situation like that, once he or she is out of immediate danger, your next step should be to contact law enforcement. If you have a ham radio, then you may be able to contact them directly. If you have an inReach, send a text to your spouse or another responsible person. Have them call the sheriff with your GPS coordinates and relay instructions back to you. I had been worried about alerting a search and rescue team unnecessarily, but Perkins dismisses this and emphasizes that it is entirely appropriate to bring them in. That’s what they are there for, and no one should hesitate to call the authorities for fear of causing a dust-up.

So comms are key. But what about other ways to signal for help, such as those two rifle shots that Jake made? Perkins grants me some measure of absolution for going about my business after hearing Jake’s shots. There are just too many reasons a person might fire a gun during hunting season, even in the dark, for this to be a reliable call for help. A safety whistle (without a ball, as the others tend to freeze up in the cold), blown at regular intervals, is a better bet. A glow stick tied to a string and whipped around in a circle is a good visual signal.

Perkins also mentions the usual survival gear—a warming Mylar blanket, fire starters, and the like—but Jake’s story is a useful reminder that none of those tools are any good if you don’t have them with you. Always remember: Your hunting pack is your life, and it could save someone else’s life as well.

This story originally ran in the Survivor Mindset issue of Outdoor Life. Read more OL+ stories. And listen to seasons 1 and 2 of the Outdoor Life podcast on Spotify, Apple, or wherever else you get your podcasts.