Don't mess with moose this time of year 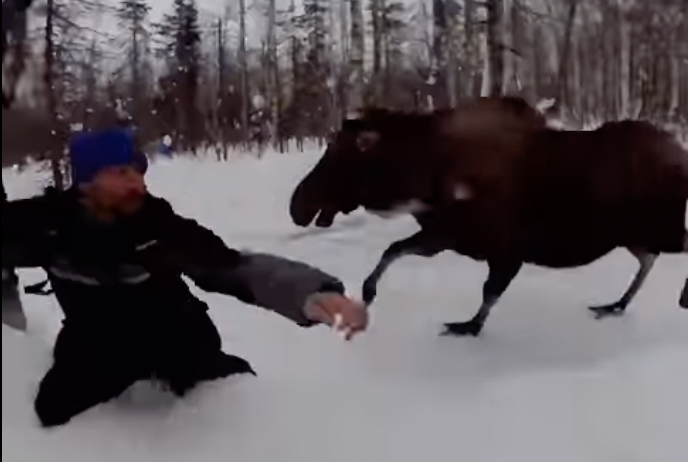 A cow moose kicks out as it runs by a fleeing dog musher.
SHARE

Alaska’s moose typically get grouchy in March and April. Weary from deeper snow and a less-than-ideal diet, late winter is the time when many moose succumb to the elements. The ones left standing will refuse to leave packed trails, where the walking is easier. Many of these moose become aggressive.

The heavy snowfall and cold, wet conditions that have persisted across much of Alaska this winter have worn down their patience. There have been several dangerous encounters between moose and people over the last month or so. In neighborhoods and on packed multi-use trails, the stressed animals are causing chaos. Three weeks ago, we covered the story of a musher whose team was stomped repeatedly by a bull moose.

This video, shared on social media last week, shows a cow moose charging a man in his driveway. The man is saved at the last second by his brave wiener dog when it fearlessly leaps at the moose. The situation could have turned deadly in a hurry had the moose knocked the man on the ground or pinned him against his vehicle.

Another recent video of a close encounter was recorded and shared by a couple visiting Alaska. They were on a dogsled tour—a popular tourist activity in the interior—when their team encountered a cow moose standing with her calf in the middle of the trail. The cow immediately charged through the team, stomping and kicking at dogs and riders as it ran by. Luckily the moose didn’t stop to continue the attack—as sometimes happens.

Many moose attacks don’t even make the local news here in Fairbanks, as its a fairly common occurrence. A biologist, Tony Hollis, told Outdoor Life last week that he is aware of at least 10 incidents where people have been attacked by moose in the area.

“About half the people didn’t even see it coming,” Hollis said. “They just walked out the door or were not paying attention, and were attacked from behind.”

Fortunately for everyone involved in these two recent encounters, no humans or dogs were injured. And in both instances, the moose walked away, too—agitated, but unharmed.