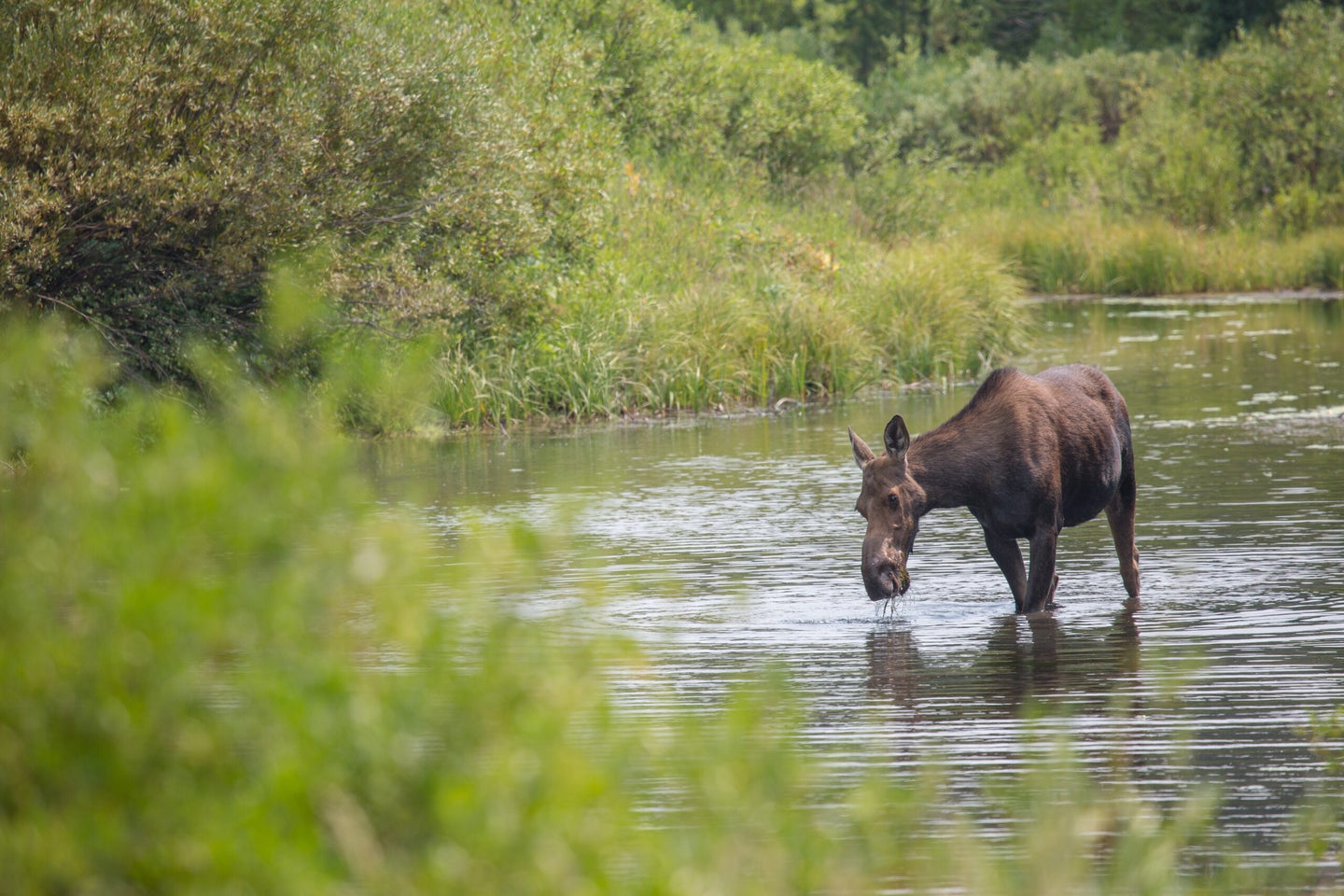 A cow moose was shot and killed by a Boulder County Sheriff’s Deputy Wednesday morning after it charged two hikers and their dog near the West Magnolia Trailhead southwest of Boulder, according to the Denver Post. One of the individuals, a 31-year-old male, was seriously injured in the moose attack.

The second hiker, a woman, suffered only minor injuries. Their dog was hurt in the incident as well. Responders located the man, woman, and dog almost a mile from the trailhead. The moose was still on the scene, so a deputy shot beanbag rounds at the moose to deter it from charging again.

It spooked, but returned while the deputy was still attending to the injured hikers. A warning shot was fired and the moose ran off. But as medical staff attempted to evacuate the man from the area, the moose returned for a third time, continuing its aggressive behavior and charging people. At that point, the sheriff’s deputy deemed the situation unsafe and shot the moose.

This was the third moose attack reported in Colorado this year. There was an incident on May 26, in Breckenridge, and another May 31, in Grand Lake. Both attacks were attributed to cow moose protecting their nearby calves. The reason for this last human-moose encounter is unknown, but Colorado Parks and Wildlife will investigate, according to a spokesman for the agency.

The condition of the two hikers is also unknown, according to the Boulder County sheriff’s office. It is unclear if the cow was left intact at the site or butchered for the meat. —Joe Genzel

How to Defend a Moose Charge

People often think of bears as the most dangerous animals in the woods, but where they’re present—it’s often moose. After living in Alaska for 20 years, I’ve been chased by a lot more cow moose than bears. Late winter and spring are the times to give moose—especially cows—a wide berth. In deep snow, moose can be stubborn. In late May and early June, moose drop their calves, and the cows are fiercely protective of them. Moose regularly have to deal with wolves and bears preying on their calves, so they are constantly in a ready-to-fight temperament.

Generally speaking, moose are bull-headed, which makes them dangerous in certain situations. My uncle once told me a story of a time when my grandpa had a cow permit, and after shooting one, the nearby bull wouldn’t leave. They tried several warning shots to scare him off, but it didn’t work (just like the deputy in the Colorado incident.) And a cow with a freshly-dropped calf has 10 times the resolve of a rutty bull. They’re built to kick attacking predators and can easily kill a person.

If you encounter a cow moose with a calf, do not approach. it The calves are cute, but no picture is worth risking your life or causing the cow to be put down unnecessarily. Even if a cow seems passive, don’t try to just walk by it. If the moose raises the hair on it’s neck and back and/or lays its ears down flat, it’s about to charge you. If it does, don’t stand your ground. Start running. Try keeping a tree between you and the moose if you have no other options.

It’s never a bad idea to carry bear spray or a handgun as a last resort backup. I typically carry a 10mm pistol in the woods, loaded with non-expanding or bonded bullets to maximize penetration. The last thing you want to have to do is kill a mother moose, but sometimes you don’t have another option. A moose that gets on the war path is going to hurt somebody. If you have to shoot one in defense, try to shoot it in the head, and keep shooting until it’s either down or has broken off its charge. Then get out of there and report the incident. —Tyler Freel