The groom was finishing up his vows when the commotion started 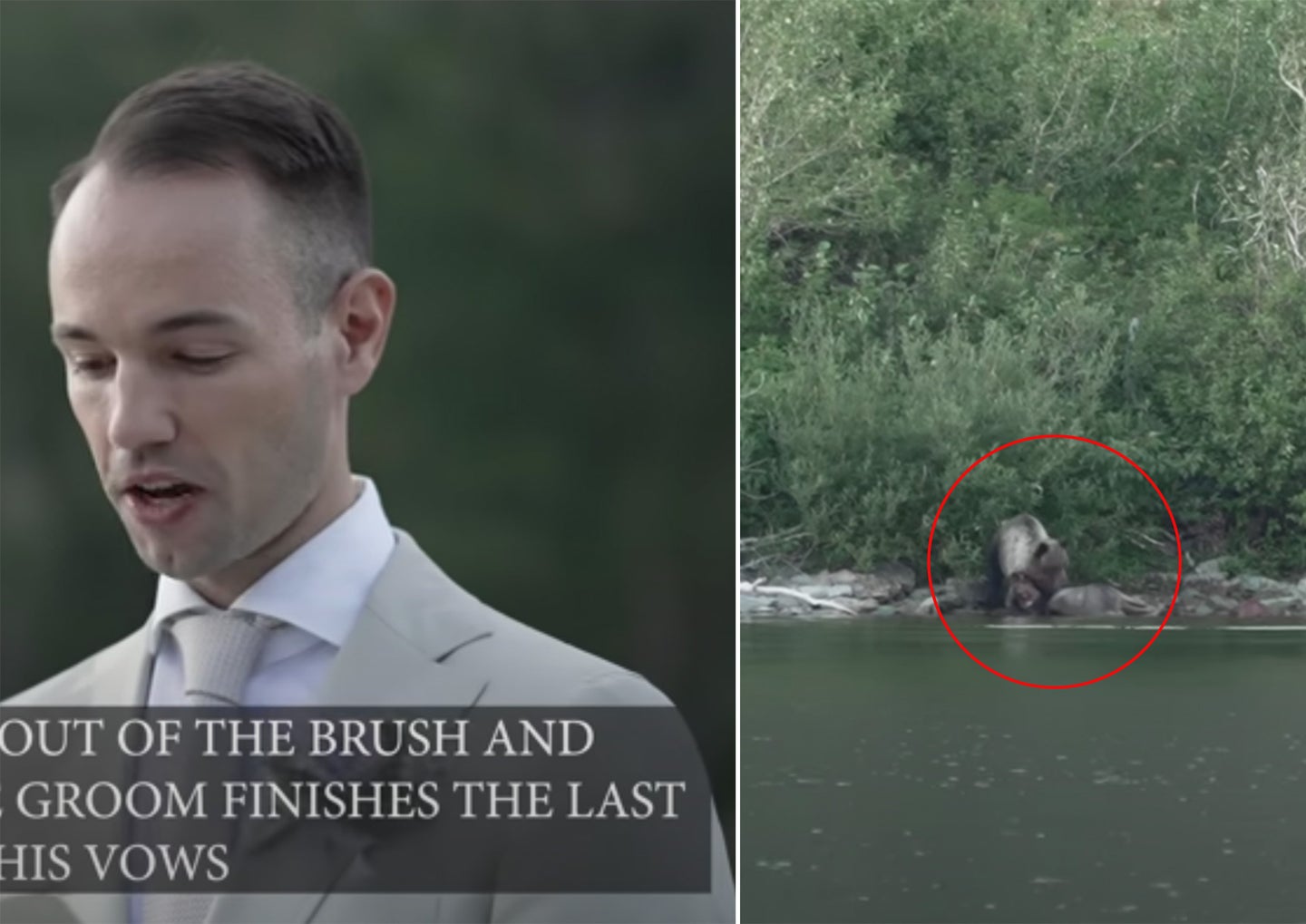 While the groom says his vows, a grizzly bear kills a moose calf on the other side of the lake. Stanton Giles / YouTube
SHARE

A wedding ceremony that took place in Montana’s Glacier National Park earlier this month was interrupted when a grizzly bear charged out of the brush to attack and kill a moose calf. The wedding’s videographer, Stanton Giles, caught the encounter on film and uploaded the video to YouTube, where it’s received more that 320,000 views in the last 12 days.

The video begins in the middle of the ceremony, which was held on the south shore of Two Medicine Lake. The groom is wrapping up his vows, telling the bride she’s his “past, present, and future,” while in the background, you can hear the moaning of a moose calf as it’s being taken down by a grizzly. Not surprisingly, the ceremony grinds to a halt.

The moaning and scuffling sounds are more audible as Giles pans away from the groom to the opposite shore of the lake, where the griz has the moose calf pinned down on the rocks. In the foreground, a full-grown cow moose—most likely the mom—is already swimming across the lake and away from the bear.

“Are we okay?” a woman asks before offering to put on some music to drown out the noise. Over the next minute or so, the guests comment on the brutal scene they’re witnessing as the grizzly bear groans and chomps down on the calf.

“I’m blown away right now,” Giles says from behind the camera. “That is insane.”

Shortly after the two-minute mark, someone puts on some music, but they seem to have a hard time choosing a song to fit the mood. Meanwhile, the carnage continues as the bear tries to finish off the moose that’s still thrashing in the shallows. At the end of the video, the calf appears to be dead, and the grizzly starts dragging it back into the bush.

The ceremony eventually picked back up where it left off. While some of the guests might have been shocked by what they saw, they certainly got the full Glacier experience. After all, the national park is a bastion of North American megafauna and boasts one of the largest grizzly bear populations in the Lower 48. As for the groom, he said in the video’s comment section that he has no regrets about the venue they chose.

“This was such a wild and incredible experience that even now we are in awe,” he wrote. “We chose to elope in the heart of nature at Glacier and knew what we were getting into. Always respect nature and wildlife.”