Terrific recipes for cooking one of the most overlooked, yet delicious, cuts of wild-game meat 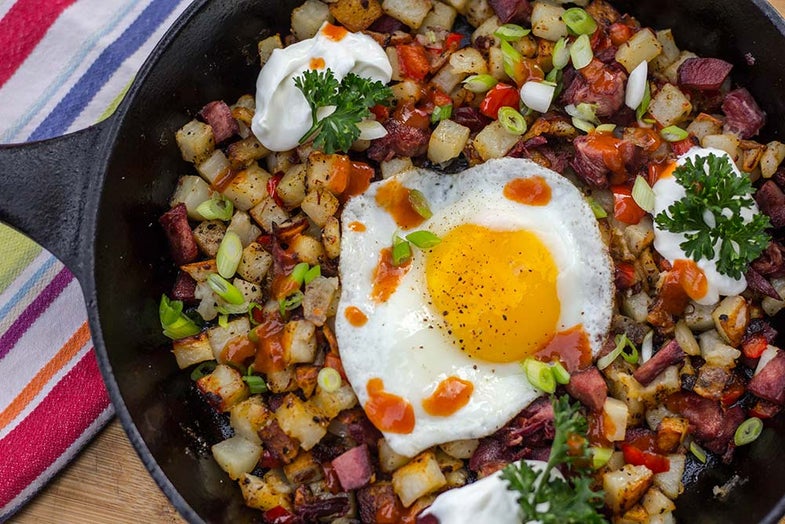 It really doesn’t matter what you do to dress it up, a tongue is just an unpleasant piece of meat to look at. With its rough hide and troubling appearance, the tongue is simply unappealing—more so than the heart or the liver. Its no wonder most hunters choose to leave it attached to a carcass and don’t eat it.

However, with proper care and a good recipe, the tongue can be a delicious part of your wild game cooking repertoire. With a little know how and a willingness to do extra work, you can turn an obscure looking hunk of meat into something amazing.

To start, you’re probably wondering, “How do you remove the tongue from the head?” The answer is no matter what animal you’re butchering, the best way to remove a tongue is from underneath the jaw. Make an incision down the center of the lower jaw between the neck and the tip of the chin.

Next, skin the neck flesh away until you can see the lower jawbone. Cut the tissue on the inside of the jawbone that’s connected to the tongue.

At the base of the jaw, cut the tongue free and pull it out through the neck. That’s all there is to it. It’s really a simple process and once you do it a couple times you’ll see it only takes a few minutes to get it done.

The tongues below are from a buffalo, elk, and whitetail deer donated by fellow hunters that didn’t want them. All three tongues are edible and you can cook them several different ways—though obviously, the bigger the animal, the bigger the tongue, and the larger the meal. A buffalo or a moose tongue will feed 4 or 5 people, whereas an elk tongue might only feed two. It takes a few deer tongues to make a meal. Fortunately, most hunters don’t cut tongues out so you can usually grab all the tongues you want at deer camp, or simply put the word out to all your friends.

You need to remove the hide on the outside of the tongue before eating. You could probably eat the hide if you really wanted, but it may taste a little gross. I simmer elk tongue in beef stock for about 4 hours before submerging it in an ice bath for 15 minutes to cool it off. This helps loosen the hide and makes it easier to peel. After you peel the hide off the tongue you can use the meat in any number of dishes. Cut the tongue into one inch cubes and add it to soups or stews, or make it into tacos.

The meat under the hide is a tough cut but you can tenderize it by cooking it for a very long time, and a crockpot is a great tool for that. For large tongues like moose or buffalo, cook the tongue in a crock-pot for 10 to 12 hours. When it is finished cooking, the hide almost falls off and you’re left with incredibly tender meat.

For buffalo tongue, I line the bottom of my Crock-Pot with cedar boughs and place the buffalo tongue on top. Then I add the following ingredients.

Directions
Cook on low for 10 to 12 hours. When the tongue is done, peel the hide off and shred the meat using two forks. I like to serve mine with a corn porridge and sweet mulberry sauce, but you can really serve the meat alongside anything. The taste and texture will remind you of a tender and flavorful pot roast.

For whitetail, one of my favorite recipes is corned deer tongue. Corning is a preservation technique where you brine the meat using a small amount of curing salt. I have tried a number of different recipes for corning wild game and found Hank Shaw’s corning brine is the best one out there. Soak the tongues in the brine in a refrigerator for 48 hours.

After 48 hours, drain the brine and place the tongues in a heavy pot on the stove. Cover the tongues in water and simmer for 4 hours. When they are finished cooking, transfer the tongues to an ice bath and let cool for at least 15 minutes. Finally, peel off the outer layer before eating. Slice the tongue thin for some of the best sandwich meat you’re ever going to find, or cut it into ½ inch cubes and make a corned tongue hash.

Directions
Melt the butter in a heavy skillet over medium high heat. Add the potatoes and the peppers and start frying it all in the butter. Stir in the corned tongue and continue cooking for about 15 minutes until the potatoes are soft and cooked. Top it with a sunny side up egg, green onions, and sour cream.

Lastly, an elk tongue makes great tacos. Simmer a tongue in beef stock for 4 hours. Then drop it into an ice bath for 15 minutes, remove and peel it, and cut it into ½ inch cubes.

Directions
Heat the oil in a pan over medium heat and add the onions and garlic. Cook the onions and garlic for 3 to 4 minutes before adding the meat. Add the seasonings and stir until it’s all combined well. Then add the sour orange juice and the stock. Bring the stock to a simmer and cook uncovered for 15 minutes. During that time you can build your tacos. Keep it simple with just the meat, some pico de gallo, fresh cilantro, and a squeeze of lime.