How to Cure and Smoke a Venison Ham Roast 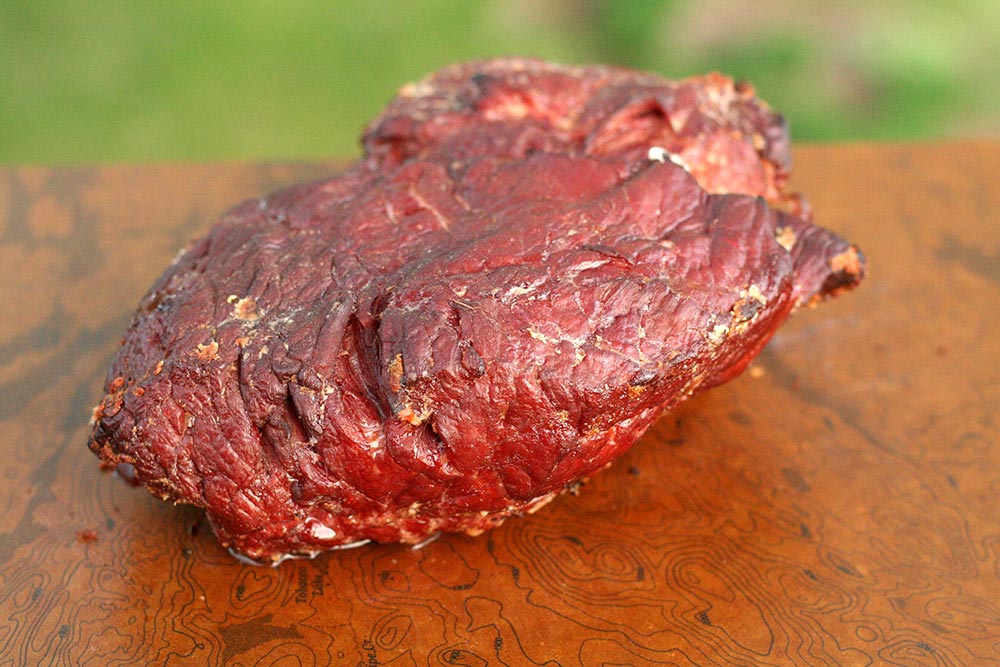 After it reaches an internal temp of 180 degrees, remove it from the smoker and let it cool off a bit. If you are not going to serve the ham immediately, wrap it in Saran Wrap and refrigerate. This will help the ham retain some of its moisture and preserve the flavor in case you use it for other meals. Jamie Carlson
SHARE

A few months ago, a reader asked if I ever made venison ham, or if I had a recipe. Unfortunately, I didn’t, but it’s always been on my list of things to try. So I figured there’s no better time than the present to give it a shot, and while I didn’t have a whole leg in the freezer to use, I was able to dig up a big hindquarter roast for my test subject.

To start, I elected to soak this ham in a brine instead of using a dry cure. This meant I submerged the venison roast in brine for a little over a week before I smoked it. I used a similar brine recipe to the one I use for pork ham, with some added juniper and allspice.

How to Cure and Smoke a Venison Ham Roast

Despite the fact it was my first attempt at making a venison ham, I was pretty pleased with the results. But there are a few things you should know before making your own. First, this is a very lean ham, with almost no fat. Oddly, the flavor was similar to that of a pork ham. Second, this cut was a roast from the hindquarter—if you want to try a whole leg, your brining and cook times will be longer than what I’ve listed below.

Combine and bring all ingredients to a boil, then let it cool to room temperature before placing the roast in the brine. Place the brine and meat in the fridge. This 4-pound roast soaked about 10 days in the brine before smoking. 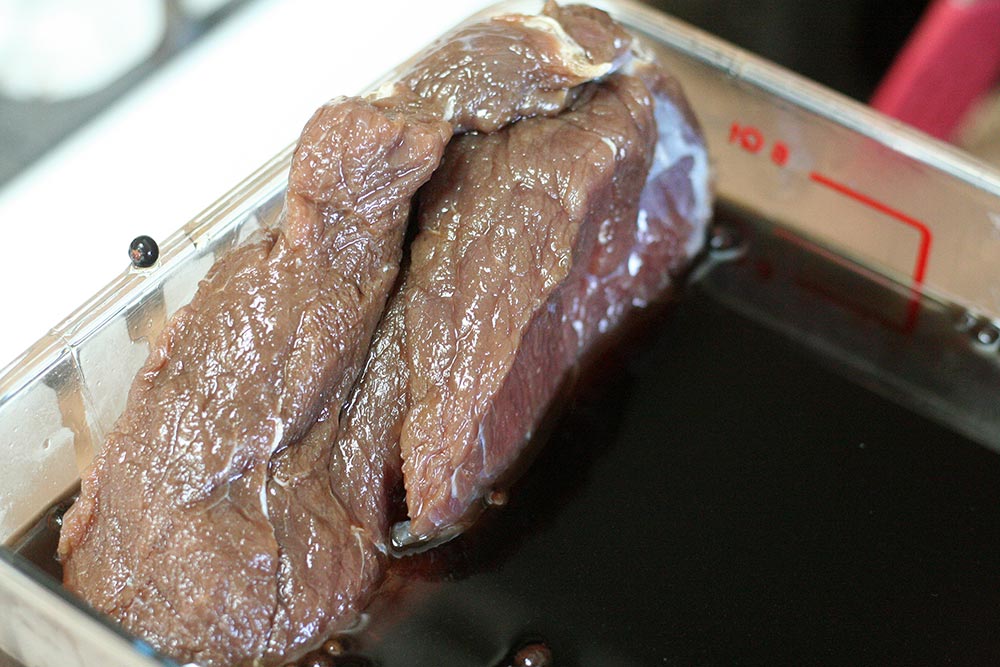 After adding the salt, sugar, spices and curing salts to water and bringing it to a boil, let the brine cool completely before submerging the meat. My brine is dark because, in addition to maple sugar, I like to use sorghum to sweeten and flavor the meat. If you can’t find sorghum, molasses works just fine. 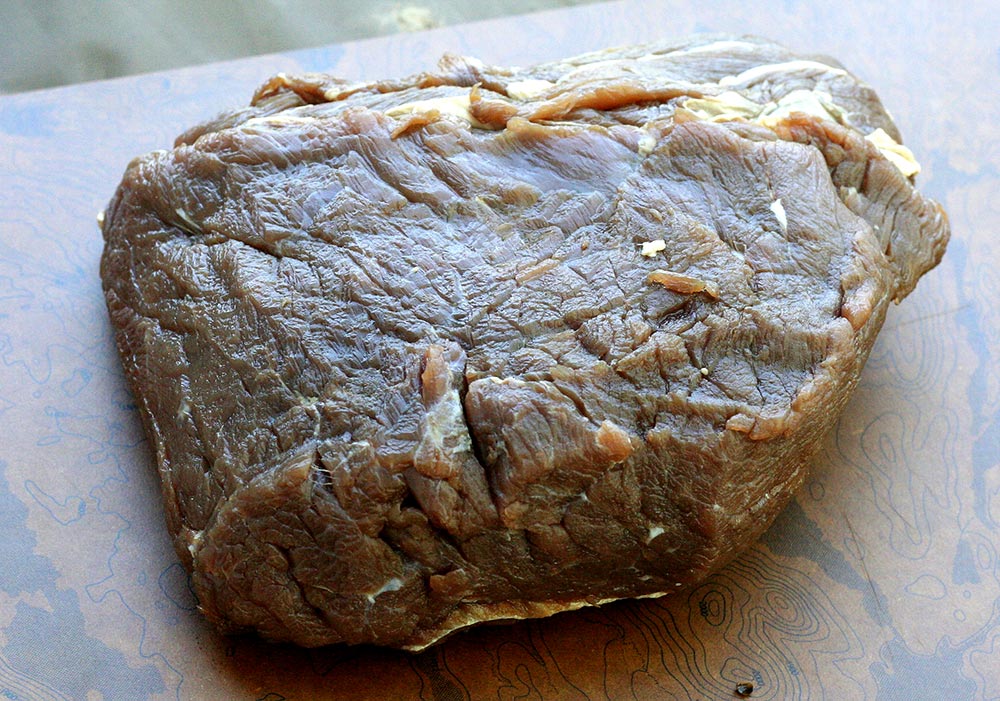 After the ham is done soaking in the brine solution (the time will vary based on how large the piece of meat is—again, this 4-pound roast took 10 days of brining), remove it and pat dry with paper towels. Let the ham sit out in an area with a good airflow or near a fan until the outside of it is a bit dry. When the ham is tacky to the touch, it is ready for the smoker. 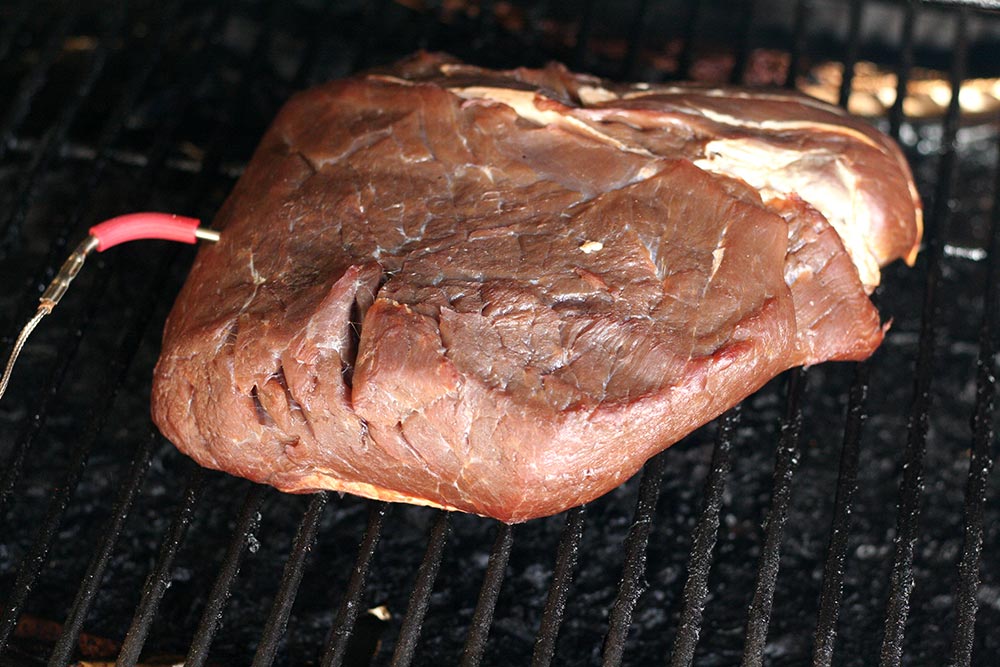 One of my favorite things about ham is the smoky flavor, so I like to make sure all of my hams get enough smoke. Start smoking it around 180 degrees over apple wood for about 3 hours before turning the heat up to 275 degrees. Continue smoking it until the internal temp reaches 180 degrees, which in my case, came out to about 7 hours total time on the smoker.

After it reaches an internal temp of 180 degrees, remove it from the smoker and let it cool off a bit. If you are not going to serve the ham immediately, wrap it in Saran Wrap and refrigerate. This will help the ham retain some of its moisture and preserve the flavor in case you use it for other meals.

The Best Recipes for Cured and Smoked Venison

The perfectly cured and smoked venison is nothing without the right recipe to enjoy it. Here are the best meals to make with your smoked venison, as well as another technique for smoking and seasoning the meat before adding it to a sandwich or meal. 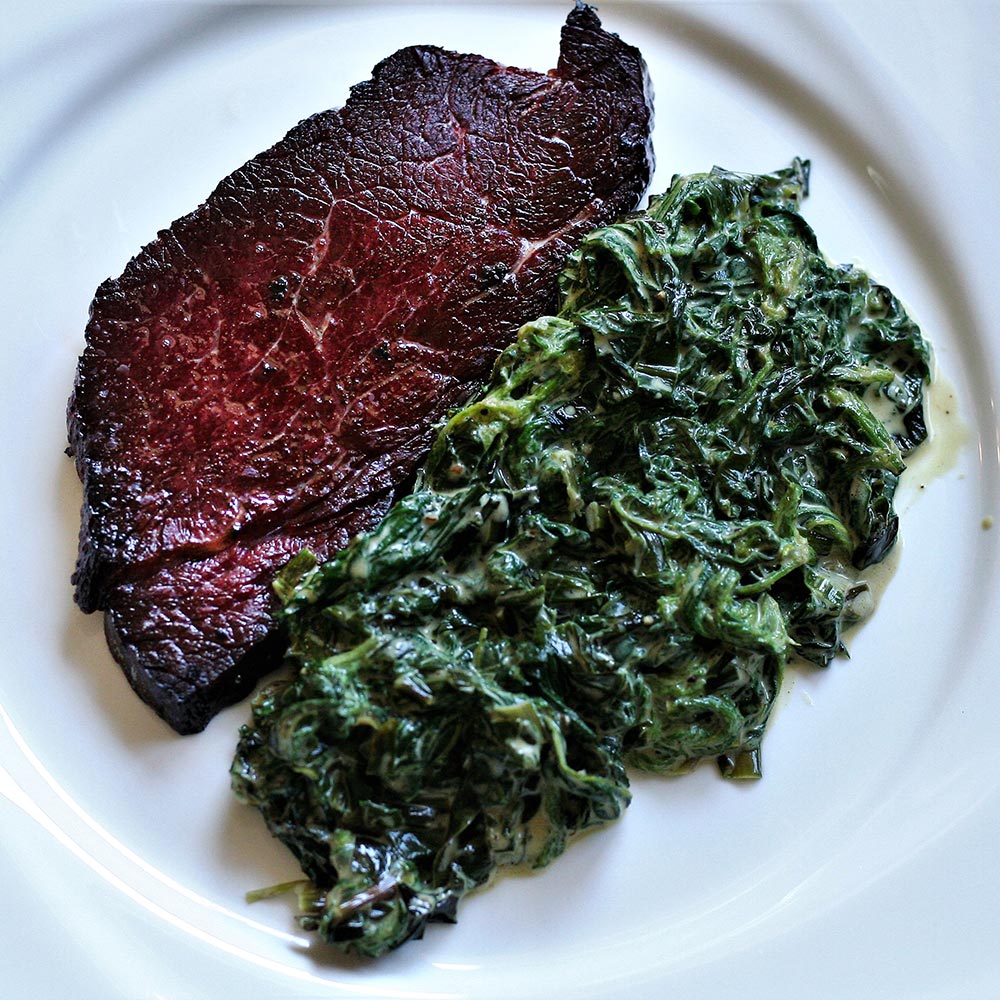 When it comes to a ham there really isn’t one “best” way to eat it. One of my favorite methods is to cut ham steaks and then fry each individually in a skillet until there’s a little crust on it. Then I serve it with a side of cheesy potatoes or creamed nettles. 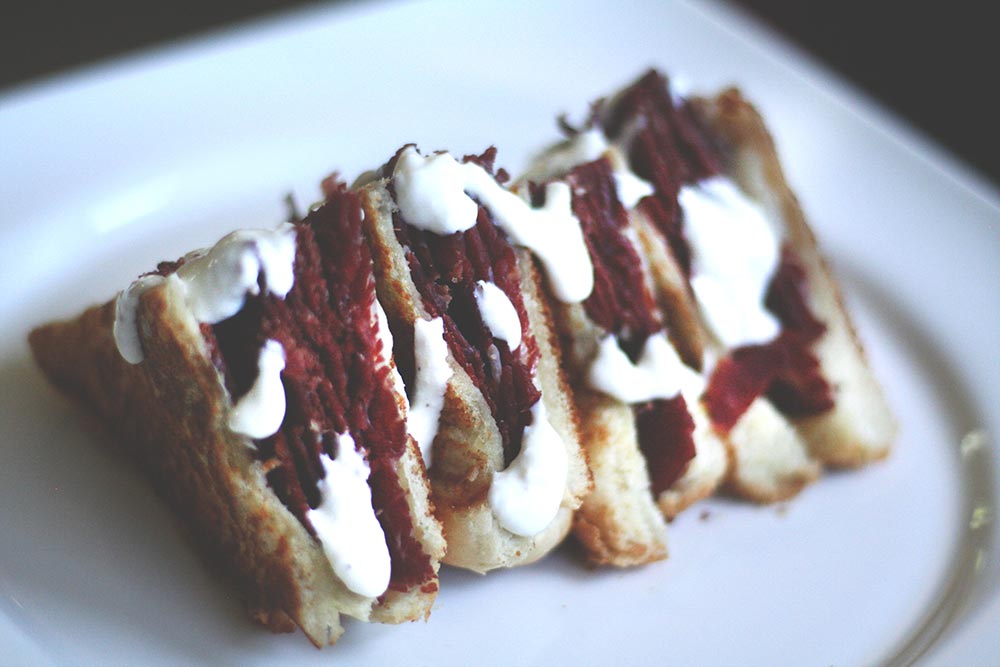 Another favorite is to slice the ham thin and make a grilled ham and Swiss cheese sandwich with spicy horseradish sauce. 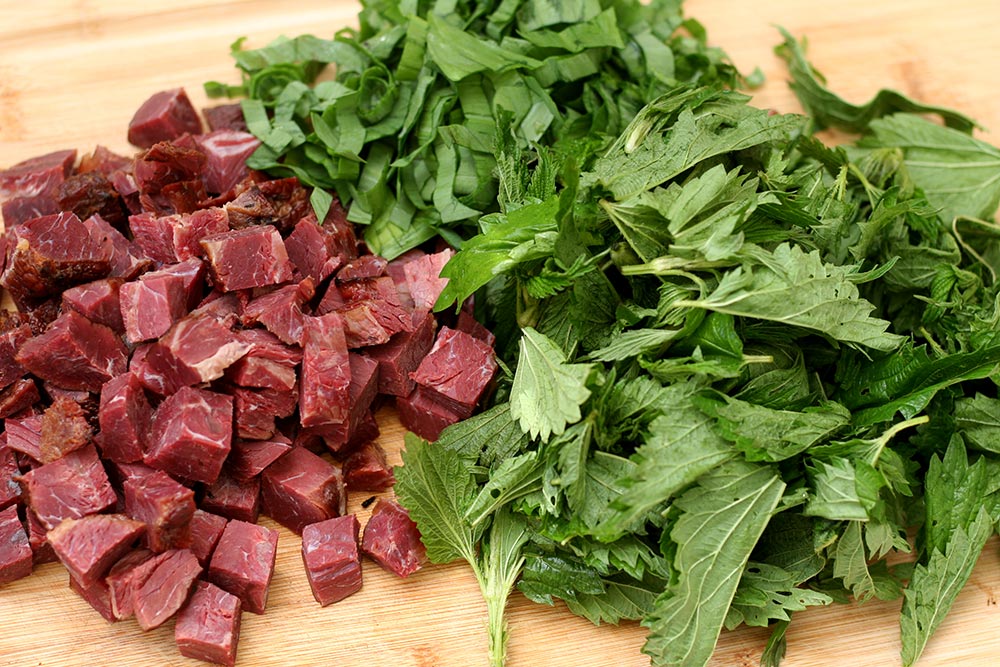 Recipe: Venison Ham and Bean Soup with Nettles and Ramps

I think my favorite thing about making any kind of ham is there are always leftovers, and the meal possibilities are endless. You can make scalloped ham and potatoes or dice the ham up for omelets. Or, my personal favorite—a simple ham and bean soup.

Read Next: How to Cook Rocky Mountain Oysters 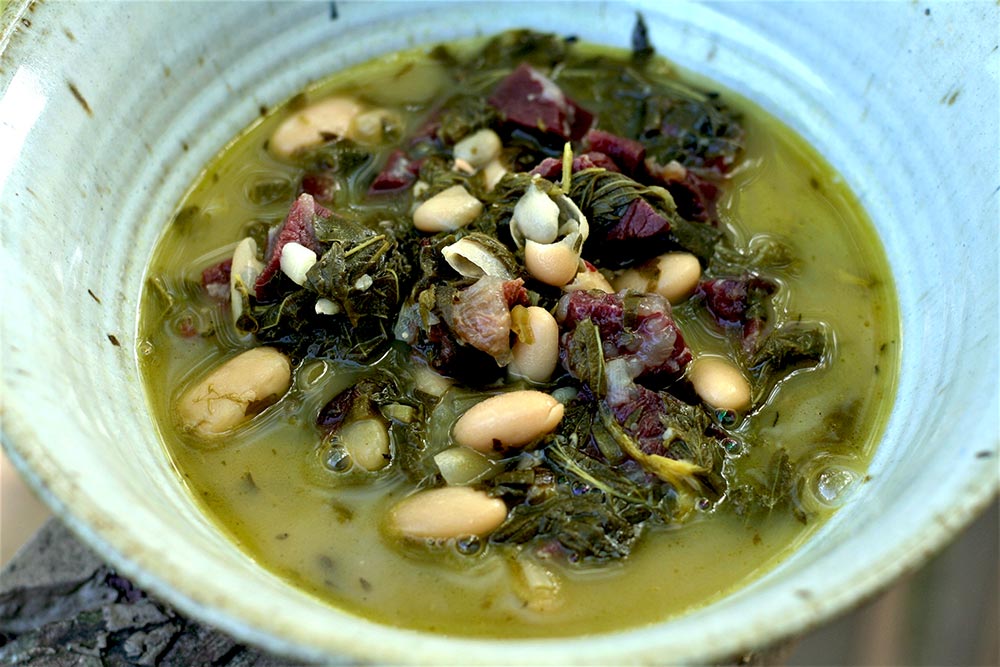 Usually there is a leftover bone to use in soup but there was no bone with this ham so I diced up the left over ham and added it to my favorite soup with stinging nettles, ramps, and white beans. It’s very easy to make and requires few ingredients.

Two of my favorite liquids on the planet are bourbon and maple syrup. I can pour either in a shot glass and pound with fire in my eyes, or casually sip with a stupid grin. Typically, when two things taste great and they’re of similar color, they can be mashed into a killer recipe. I pulled a venison roast out of the freezer one morning with plans to grill it over hardwood charcoal and wood chips, but I wanted to do something different than my standby mesquite rub with that fine hunk of deer. Next thing I knew, I had ventured into the unknown and created an injection that resulted in one of my best venison recipes to date.

Injecting meat is a great way to go if you want to add flavor and moisture throughout. There’s really no “wrong” way to do it. Just choose a flavored liquid that tastes good to you, inject it in your chosen cut of meat and get on with it. However, injecting some of the “tougher” cuts of meat is always a smart way to go. If you don’t take all the necessary steps to tenderize hindquarters or other classically tough cuts of deer, there’s a good chance they’ll end up drier than desired—especially if you plan to stick ’em on the grill.

Start by reducing bourbon in a small pan on the stovetop. I know it’s painful to kill the alcohol from perfectly good bourbon, but in this case it’s acceptable. Once you feel enough of the alcohol has been boiled off (usually just a few minutes at medium-high heat), add the soy sauce and 1 tablespoon of the mesquite rub. Let this concoction simmer on low for a few minutes, then turn off the heat and pour in the maple syrup. Run this wicked infusion through a strainer to remove the flakes of mesquite rub.

To Marinade Fill a marinade injector with the delicious liquid. Inject your venison evenly with every drop. Remove excess moisture from the outside of the meat with paper towels, then coat the entire roast with the remaining mesquite rub.

By now, your grill should be ready to rock. If you haven’t already gotten your hands on a Camp Chef Pellet Grill/Smoker, you’re really missing out. All you need to do is turn it on the “high smoke” setting and let it roll until its digital meat probe reads 140 degrees, then cover the meat in tinfoil (this will help retain moisture during the final cooking process). Once it hits 160 degrees, you’re in business. If you’re using a charcoal grill, do yourself a favor and use some natural hardwood lump charcoal. Follow David Draper’s instructions for turning your grill into a smoker. Regardless of how you do it, just don’t heat your meat above that 160 mark. Finish it with a glaze of maple syrup during the final minutes.

Enjoy Your Venison Steak You can enjoy your maple-bourbon smoked venison fittingly with a lowball of bourbon, or pair it with a rich craft beer. I tossed my finished product in a YETI Hopper and hopped over to Northeast Minneapolis to share with friends at Indeed Brewing Company. I brought the meat, they brought the beer. Fair trade.