Why the .45/70 Is Still A Great Cartridge for Big Game

This round is the ultimate survivor: Born in the blackpowder era, it remains solidly popular today, thanks to both its prowess as a big-game cartridge and its cowboy cred 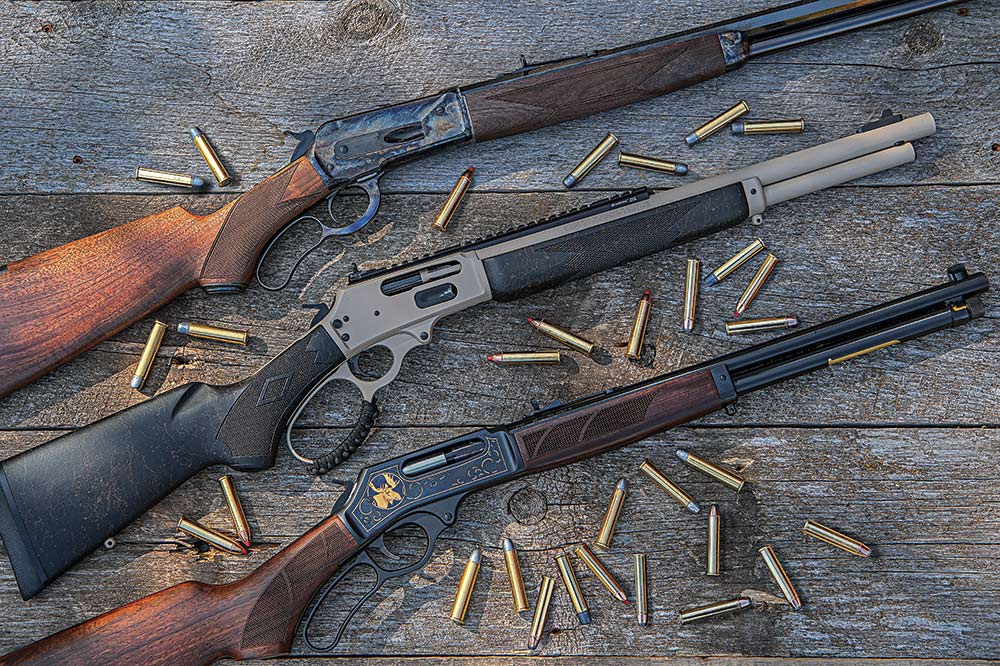 It’s hard to imagine the .45/70 Government as a brand-new round, untested and unproven either on big game or in battle. But that was the situation back in 1873, when it was introduced. That was a long time ago. Our country wasn’t even 100 years old, and the Civil War was fresher to Americans back then than 9/11 currently is to us. Giant herds of bison still darkened the Plains, but the great slaughter of these beasts was in full swing, and before long, fewer than 100 would remain in the wild.

This was the era of the Old West, which, to this day, remains securely fixed in our collective psyche. Our nostalgia for this time seems boundless. We still yearn for the simplicity, romance, and sheer possibility that the latter part of the 1800s represented to our young nation—even though the lens through which we view this period is wildly distorted in so many ways.

But one true thing that remains from that time is the .45/70. Benefiting from advances in powder and bullet technology, the .45/70 won’t quit. This round has endured decade after decade, winning over new generations of sports­men who might initially be attracted to it as a historical curiosity, only to discover how versatile, and relevant, it remains for hunting big game and dangerous game today.

It started life as a blackpowder round, the .45 referring to the bullet caliber and the 70 to the weight in grains of the powder charge. The original projectile was a 405-grain lead bullet that exited the muzzle at 1,350 fps, give or take. Black Hills Ammunition and other ammo companies make loads today that basically mimic this performance but use smokeless powder, of course. By today’s standards, this is a mild load, but it was all the original Springfield 1873 Trapdoor rifles could handle. It remains a great plinking round for the .45/70 and is fine on big game, provided the shots aren’t very far, since it has a trajectory like a brick being tossed of a cliff.

In strong modern rifle actions—“modern” being a rather subjective term, given the age of some of the designs that are characterized as such—the .45/70 transforms into a true thumper, capable of tipping over even the largest game. Handloaders have known this for years, and have eagerly refilled their .45/70 empties to capacity with one powder or another—sometimes at the cost of common sense, lost digits, and whiplash—to achieve better velocities.

Commercial companies followed suit. For dangerous game and other large critters, there are many high-power +P loads on the market that push heavy bullets much faster than the original specs. Grizzly Cartridge, for example, has a great 420-grain flat-nose lead-cast bullet at 1,950 fps that will drill deep through tough hide and heavy bones. By way of comparison, this load generates 3,547 ft.-lb. of muzzle energy, versus the original 405-grain load’s 1,639 ft.-lb.

The most significant development for the .45/70, however, was the advent of Hornady’s flex-tip (FTX) bullets in their Leverevolution line. These pointy bullets are safe to use in rifles with tubular magazines, and shoot much flatter than traditional round- or flat-nose bullets.

Paired with a good lever gun, the .45/70 is a consummate hunting rig for thick brush or timber. The rifles are short and handy, can be run very fast, and pack a wallop. Lever-actions, being scabbard-friendly, are great for horseback hunts, but they are also ideal for hunting from a blind. For everything from elk to grizzlies to hogs, this pairing is an excellent choice. Many states have relaxed their regulations for primitive weapons seasons, allowing old straight-walled cartridges like the .45/70 to be used where only muzzleloaders or slug guns had been permitted. Good quality, inexpensive break-action single shots are also an option.

The only real limitation is with long shots, which is a bit ironic since part of the reason the U.S. Army adopted the .45/70 in the first place was for its long-range effectiveness. Because the bullets can travel so far and still hit hard, the military brass envisioned artillery-like volley fire lobbed on targets up to 3,000 yards or more downrange. Even today, many shooters like to compete with the .45/70 in long-range blackpowder events, taking on targets 1,000 yards or more distant, despite the round’s rainbow trajectory.

The point being, don’t sell the .45/70 short. It is not only the granddaddy of our centerfire rifle cartridges, it continues to be a top seller, even though literally hundreds of other cartridges have been introduced since it debuted. Is it going too far to call the .45/70 immortal? I don’t think so. As long as we have rifles that shoot lead from brass casings, the .45/70 will be with us.

A lever-action for the traditionalist: The beautiful case-hardened receiver, gorgeous octagonal barrel, and pretty wood give the ’86 tremendous aesthetic impact. The heft of the rifle is a good thing because the crescent metal buttplate, pretty though it may be, is rough on the shooter’s shoulder.

A handsome blend of traditional elegance and practical hunting utility, this is the fastest cycling of the .45/70 lever-actions. And the receiver is drilled and tapped for mounting a scope, though the iron sights it comes with are quite good. The thick recoil pad takes the sting out of hard-hitting loads.

Produced by the Marlin Custom Shop, this is the best expression of the .45/70 in a 21st-century lever gun. With its durable Cerakote-­finished exterior and synthetic stock, oversize lever loop, and excellent peep sight, it is ready to take on the toughest animals in the harshest environments.

Buckeye State hunters are allowed to use straight-wall cartridges firing .357- to .50-inch diameter bullets, but there are no specific regulations in place regarding overall case length. This means that cartridges like the .45/70, .444 Marlin, and .450 Bushmaster are all legal. Ohio does have a specific rule that says rifles can be loaded with no more than three cartridges in the magazine and chamber combined. Winchester says that specific language regarding the legality of the 350 Legend (with its .355-inch bullets) is slated to appear, but as of yet that hasn’t been available. Ohio’s youth firearms season is November 23 and 24, 2019, and statewide firearms deer season runs from December 2 to December 8 and December 21 and 22. Ohio DNR Website

On private land in Indiana deer hunters are allowed to use centerfire cartridges with cases from 1.16 to 3 inches in length that fire projectiles measuring .243-inch or more. Hunters may not possess more than 10 cartridges, and FMJ bullets are not legal. On public land hunters may use straight-wall cartridges firing bullets .357-inches or larger in diameter, and case length must be between 1.16 and 1.8-inches. This excludes cartridges like the .45/70 because of case length, but there’s specific language on the IDNR website that allows for the use of the 350 Legend. Indiana’s reduction zone season runs from September 15 to January 31, 2019 (certain areas only). Youth season is slated to run September 28 to September 29, and firearms season is open from November 16 to December 1. Indiana DNR Website

The southern portion of the state is designated as a Limited Firearms Zone, and this means that only straight-wall centerfire rifle cartridges may be used, and those straight-wall cartridges must fire a projectile at least .35-inches in diameter and must have an overall case length between 1.16 and 1.8 inches. That means there’s no issue using the 350 Legend cartridge, but longer straight-wall cartridges like the .444 Marlin and .45/70 aren’t legal. The northern portion of the state allows the use of bottleneck centerfire cartridges. Michigan’s statewide deer season runs November 15 to November 30, 2019. Michigan DNR Website

Iowa allows the use of straight-wall rimless cartridges with bullet diameters of .357- to .500-inch with case lengths between .850 and 1.8 inches, and straight-wall rimmed cartridges with .357- to .500-inch bullets and case lengths between 1.285 and 1.8 inches for the statewide shotgun deer season which runs December 7 to 11 and December 14 to 22, 2019. Certain cartridges that don’t fall into that category are allowed for use, and those include the .444 Marlin, .45/70, and .375 Winchester according to the current regulations. The exemption list doesn’t include the 350 Legend, but when I contacted the IDNR directly I was told by the representative that the cartridge had been approved in the state, though I couldn’t obtain any official documentation at deadline. Iowa DNR Website