Smaller companies are designing some of today’s greatest camo patterns. 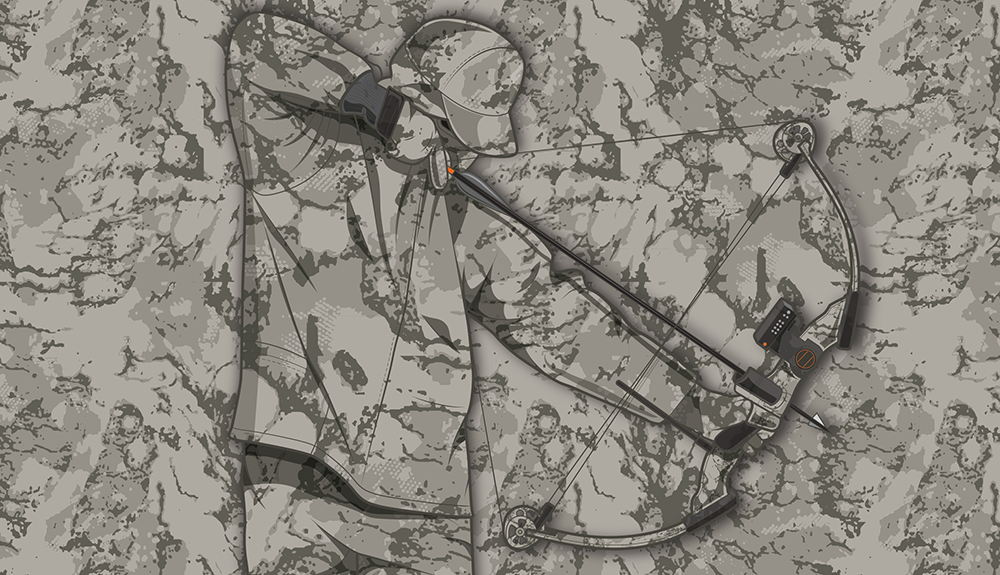 Amidst the highly visible giants of the camouflage industry, a growing number of smaller companies are bringing fresh designs to the landscape that can be tough to spot but are difficult to ignore. If you’re more focused on evading animals’ eyes than in joining a brand-driven camo club, consider disappearing with some of these new patterns. 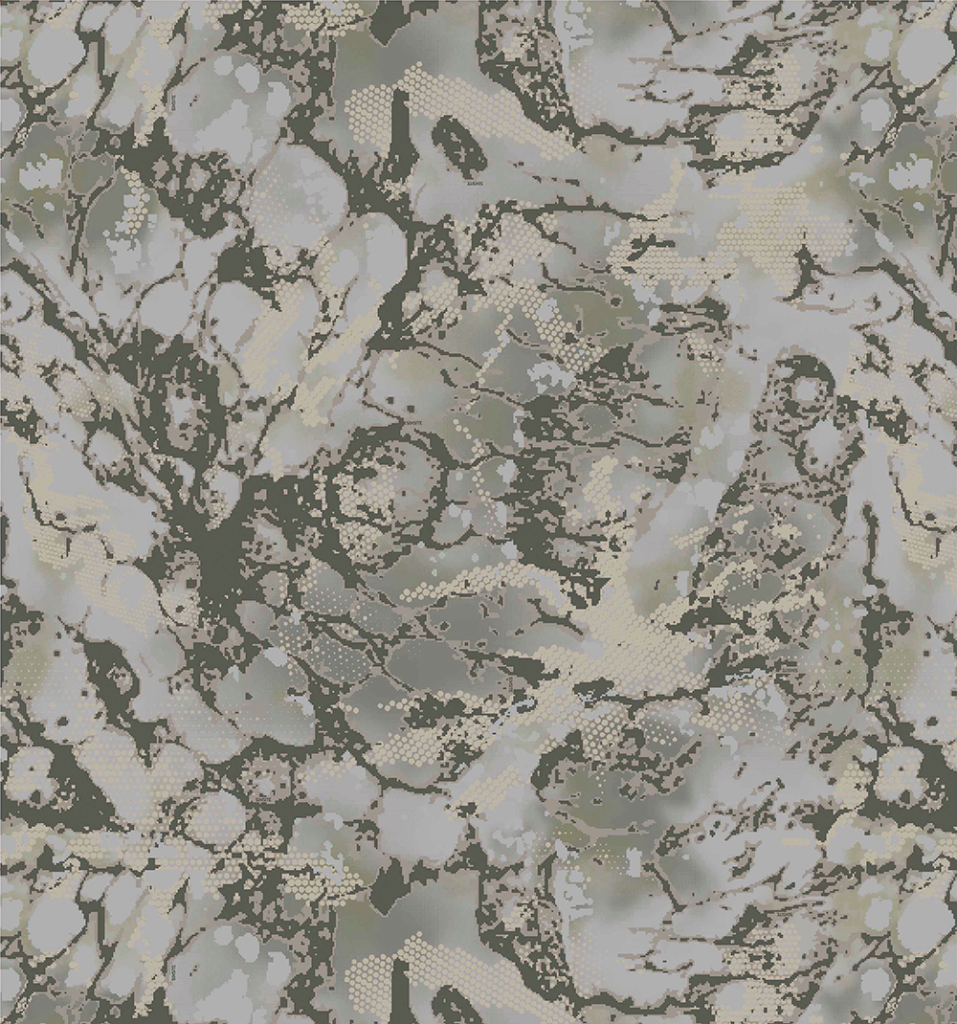 Stephen Holley was a frogman who served on several Navy SEAL teams—a career in which effective camo could mean the difference between life or death. He came home and created camo under his new SixSite brand with a very specific concept in mind: “I wanted to design a pattern that had digital elements combined with an organic foundation, to create a multi­dimensional element that could be traced back to nature.”

After more than a year of field-testing, the resulting pattern was RANA. Available for pre-order in summer 2016 on soft-shell and insulated jackets and pants, RANA is based on—­fittingly—frog skin. It’s made to help you disappear into anything from a Western mountain to an Eastern treestand. “Every single garment is built in American factories on American soil,” says Holley. “Why? Because I fought for this country, and I believe that supporting American workers is the right thing to do.” 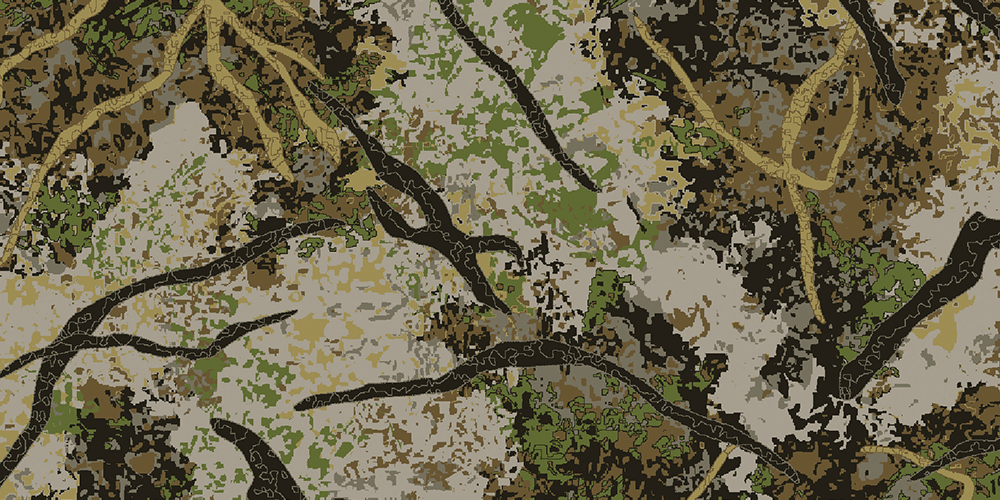 After 60 revisions, refined over nearly a decade of stalking big game, the EVADE OmniVeil camo pattern was finally given a stamp of approval by TUSX founder Tony Stoyanovski—a diehard hunter from Australia. “Originally we began creating mimetic [branches, leaves, etc.] camouflage,” Stoyanovski notes. “How­ever, we were frustrated by the constraints of using natural, photo­realistic elements. These patterns could only be pushed so far before losing their realistic appearance.”

Instead, the EVADE OmniVeil pattern incorporates “random tonal microstructures” made up of a stew of shapeless blobs and flecks. Its purpose is to help you melt into diverse surroundings of varying colors and ­densities at any distance from your quarry. It’s found on a full line of high-tech hunting apparel that’s shipped straight from the Outback, mate. 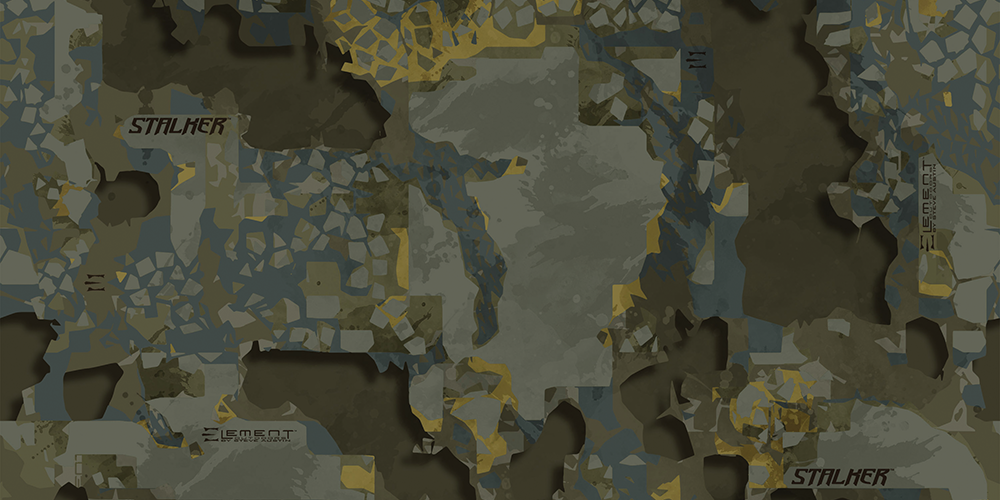 Chris Nallick, a blue-collar oilman, owned a side company that built equipment for Water Transfer Printing (WTP)—the process used to dip bows, guns, and other hard goods in camo patterns. He realized that all the WTP companies were paying an arm and a leg to license existing patterns, so he thought, Why pay royalties? Let’s develop our own camo patterns.

The idea got wings, so he sold his existing WTP business and entered the camo industry with several proprietary patterns under the new Element Outdoors brand. The Stalker pattern, optimized for open-country hunting, is Element’s first crack at digital camo. Stalker uses an arrangement of browns, grays, and yellows that are intended to look 3-D on flat surfaces. The pattern is currently available only on hard goods, but apparel is coming soon. Pro wrestler “Stone Cold” Steve Austin is helping pitch Element’s camo gear.

Advanced Tactical Concealment System (A-TACS) camo patterns have been popular among military and law enforcement personnel for years. Now they’re catching on with hunters, especially after being introduced as the official camo patterns of Browning’s new Hell’s Canyon Speed line of apparel. According to A-TACS co-owner Phil Duke, their team doesn’t subscribe to the “universal pattern mentality”—meaning they don’t believe one pattern is suitable for every setting.

The new Intermediate Xtreme (iX) pattern is a combination of two proven A-TACS patterns: Foliage Green (FG) and Arid/Urban (AU). It’s still not an all-purpose pattern, but it’s supposed to be more versatile than its two habitat-specific constituent parts.

A tiny company named Cabela’s recently unveiled its new O2 Octane camo pattern, which will be printed on a variety of apparel and footwear set to debut this fall. The pattern was developed entirely by Cabela’s internal design team, and more than 75 iterations were rejected before the final pattern was adopted. It uses contrasting colors and tones and abstract shapes to break up the human outline. Unlike Cabela’s Outfitter pattern, which was designed for Western landscapes, O2 Octane is made to blend into any habitat type in any region.

A Survey of Camo Preferences among Outdoor Life Readers

We polled readers via Facebook and here on outdoorlife.com about their camo preferences, and collected responses from 2,135 of you. Here’s your take on in-the-field concealment.

1. Do you wear camouflage when you hunt?

2. How much do you think wearing camo contributes to your hunting success?

3. Do you own multiple brands of camo?

3. Do you own multiple brands of camo?

4. Do you wear matching camo?

4. Do you wear matching camo?

5. Would you be willing to try new camo brands and/or patterns? 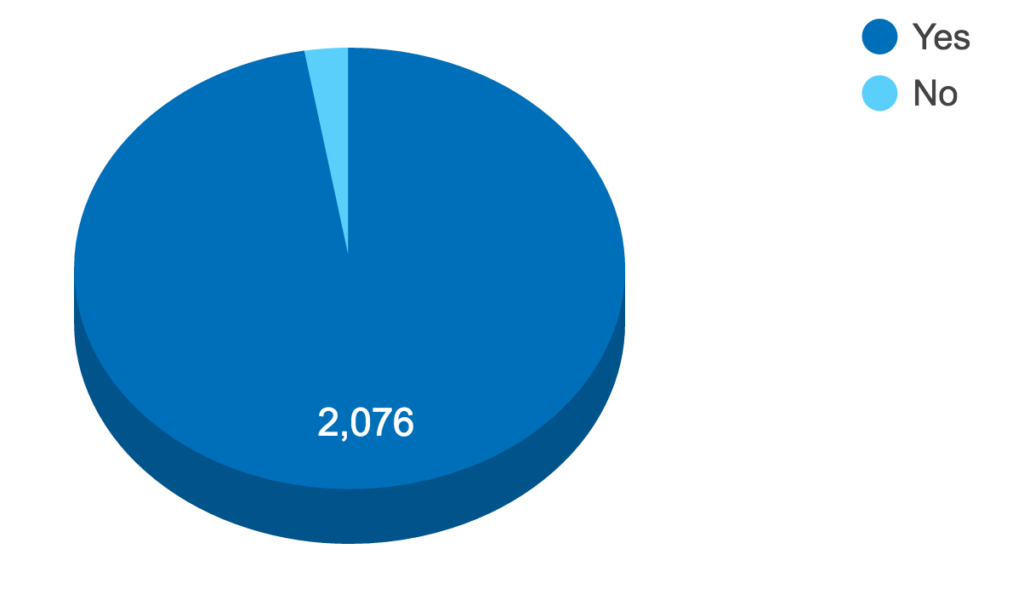 When we asked readers specifically what camo brands they wore, they replied with a range of answers, including everything from Sitka patterns to military surplus gear. Many listed both RealTree and Mossy Oak as their main camo wear. Some reader comments:

I almost always use camo when hunting, but I also consider it only part of my concealment strategy. As important as it is to blend in, I believe movement to be just as important. I also believe camo to be more important when hunting at close range (like with a bow) than when at longer ranges (like open country mule deer).

Scent seems to be the biggest factor for me, playing the wind is #1. I think the camo just seals the deal

I am primarily a waterfowl and deer hunter, water fowling especially requires concealment, and grassland patterns work really well. It is profound how much camo has improved since I started hunting about 50 years ago…

You probably should have asked what we hunt, as my use of camo depends on the game hunted. I wear a gray hoodie hunting deer from a treestand, but wear full body camo hunting turkey on the ground. Depends on circumstance.

To me I don’t think one camo works better than others. It depends what you are doing and what your area and environment is like for you. It can change from hunting zone to hunting zone, in my opinion.

I hunted in Europe and had some camo—they looked at me like I was an alien. They wore solid green.

The best thing about camo is that it breaks up a hunter’s outline. The best camo in the world is rendered useless if turkey and deer see movement.

Does one camo pattern really work for all environments? I have been lucky enough to hunt with family located around the country and find it helps to match the local environs as best as possible. Of course, my grandfather always hunted in his red and black checkered wool hat and jacket and healways did okay, so what do I know.

To me its less about pattern and more about accessibility. I have a lot of clothing in Realtree Xtra pattern because I have picked up pieces from different retailers and online establishments. Simply put, RealTree is available everywhere, but I do think Kryptek, Kuiu, and First Lite make some great technical gear. The aforementioned brands are just a bit rich for my blood.

I’ll admit I only wear/like camo for turkey season. Beyond that I don’t have much use for it other than a more traditional camo like my Kromer Ottawa Camo cap. For deer/elk hunting I prefer a more traditional look of plaid wool clothing. I liked the old traditional Treebark camo, and wish they still made it, but I don’t like the fashion statement that camo has become over the last few years. I’ve killed a lot of critters in my life, and other than turkeys, I wasn’t wearing any camo at all and still managed to kill them just like has been done since the beginning of time.

As a female hunter, my pet peeve is pink splashed on camo. Not cool for sporty girls.

I am more interested in fit and functionality than the camo pattern. Sitka is the best gear because of fit.

I look what is quietest first. They’ve got to be able to print on a quiet material or I won’t buy

New camouflage patterns every year is mostly a marketing scam payed on hunters with too much money to spend. ––Josh Dahlke

Rethinking the Necessity of Camouflage

I’m going to tell you something revolutionary: I don’t believe in camouflage.

I don’t think its contrasting colors hide me from wild animals. I don’t think looking like an oak tree or a wetland makes me invisible to deer or geese. And I don’t think a distracting pattern of pixels obscures me from the keen eyes of antelope or elk.

This is subversive talk. A huge segment of the hunting industry is deeply committed to the necessity of camouflage. In fact, it would seem that camo is the flag, badge, and uniform of American hunters. To be camo’ed is to self-identify as a hunter.

But camouflage is also highly tribal, and, it seems, mutually exclusive: If you are a Mossy Oak acolyte you can’t belong to Team Realtree. If you sport Sitka you can’t wear Kuiu.

I’m here to tell you it ain’t so, but in saying that I feel a little like the candid boy who disclosed that the emperor was stark naked. It’s not popular, especially because camouflage companies have so much influence over what we as a group wear. But I have a few exhibits to trot out in my defense.

The first is from Europe, where roe deer and other wild ungulates have been relentlessly pursued for millennia. If any critters can recognize a hunter, it’s these nervous, edgy little deer. Yet, most European hunters don’t wear camouflage. They wear forest-green apparel, often cut in styles that they can wear to town as easily as they do to a deer-hunting hochsitz (high seat). And these European hunters kill roe deer by the tens of thousands, looking good as they do it.

In Africa, hunters wear khaki, and often (very) short pants, and have been killing animals for centuries. How many Pennsylvania whitetails never saw the hunter with the Savage 99, the one wearing the red-checked mackinaw jacket? And how many ducks have been killed by crusty old salts wearing oilskin over their ragg wool sweaters?

The reality is that camouflage does give us an edge. It especially helps in close-quarters archery hunting. And it helps break up our outlines and lets us blend into our surroundings. But hunters rely too much on this garment gimmickry and not enough on our own woodscraft. If we kept from silhouetting ourselves on skylines, put the wind in our faces, and minimized our movements, we could probably wear aluminum foil and still kill critters.

I’ll probably always have camo in my wardrobe, mainly because it’s the color of my warmest, most field-friendly outerwear, and I love the way it masks blood and mud stains. But our dependence on camouflage obscures one truth more capably than it does our bodies: it’s not the clothes that make the hunter, but rather our abilities. –– Andrew McKean