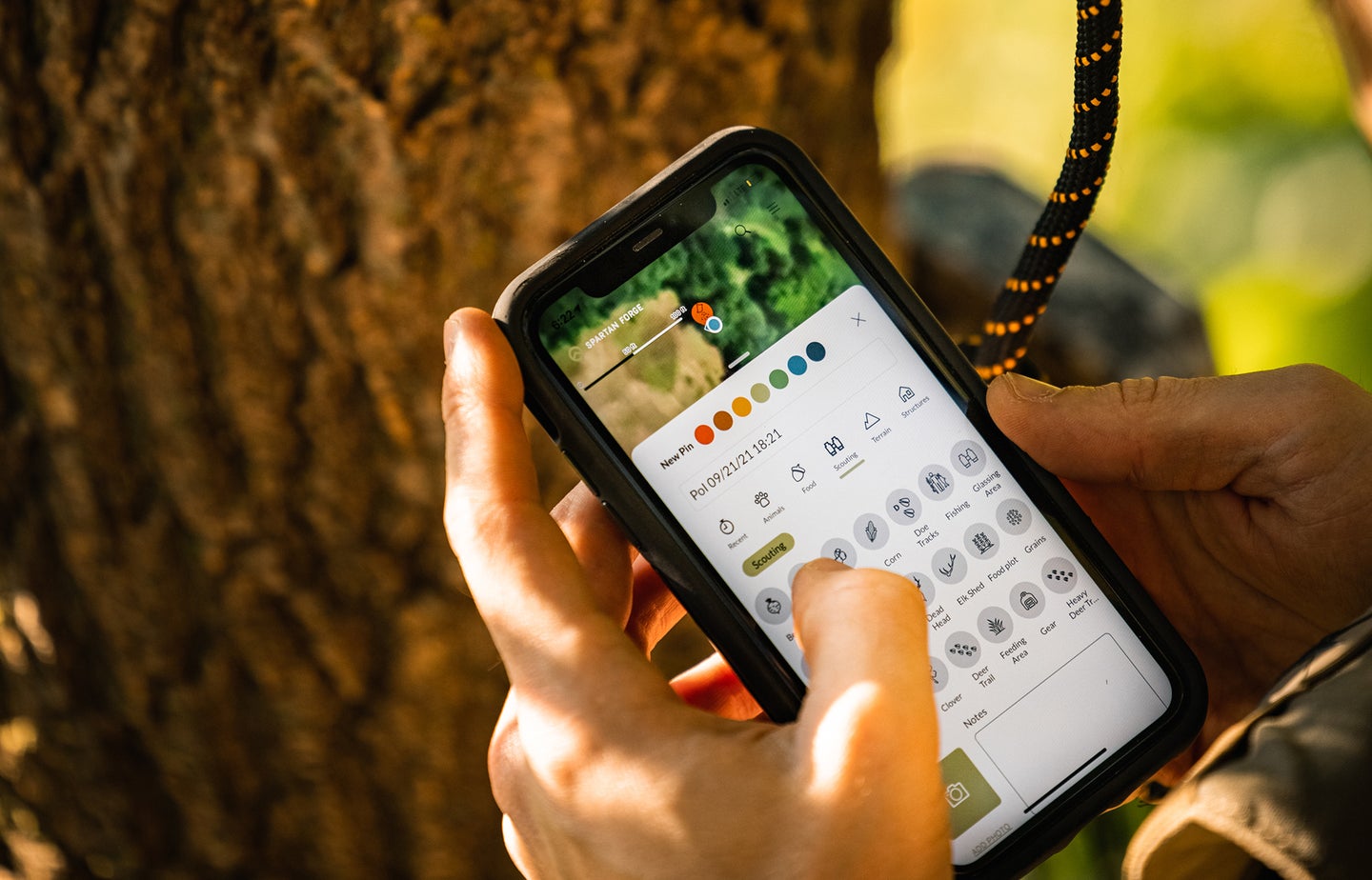 You’ve probably bought apps and calendars that promised to predict when whitetail deer would be moving. Some are gimmicks and some are fairly accurate. Spartan Forge is a new app that uses artificial intelligence to predict whitetail movement, and its founder says it was 65 percent accurate at predicting movement of wild whitetails in a collared deer study.

Bill Thompson created Spartan Forge after 20 years of experience using predictive AI software as an Army Intelligence Warrant Officer. In the military he used AI to track and predict movements or exploit tendencies of high-value targets for military operations. Today, he’s shifted his focus to his passion for pursuing whitetails.

According to Thompson, bowhunters and battlefield commanders are both tasked with solving a targeting problem. Spartan Forge uses targeting methods proven during the latter part of the global war on terror to equip bowhunters with everything they need to solve the targeting problems they encounter in the field.

“My goal with Spartan Forge from the beginning has been to automate the cycle of gathering intelligence for the hunter and to make it as easy as possible,” said Thompson. “Not to remove the need for scouting, but to make scouting smart.”

Spartan Forge uses data from multiple collared deer studies conducted by state agencies across different regions in the United States and pairs it with local variables like the weather forecast, wind speed and direction, barometric pressure, humidity, sunrise/sunset, and moon overhead/underfoot factor. The AI algorithm interprets all those factors to predict what the deer in your area will be doing.

“We trained the AI to recognize patterns in deer movement based on your forecast,” said Thompson. “This will help hunters plan where they hunt and any tactics that might work best for the conditions.”

“Find, fix, finish” is the special operations’ targeting model, and Thompson has applied that same mantra to Spartan Forge.

The AI built into the Spartan Forge algorithm is more sophisticated than similar products, Thompson says. Unlike other apps that use predictability models based on a limited sample size, Spartan Forge leans on what it says is more than 2,000 collective years of collared deer studies to predict movement trends.

“When a deer wears a collar for one year, that equates to one year’s worth of data,” said Thompson. “When you lay all of our data out on a timeline, it adds up to over 2,000 years.”

The outcome of all that data is an AI that tells you how likely the deer are to move and whether deer will generally stay close to bedding or be traveling farther outside their core area. According to Thompson, the collared deer data fuels deer predictability models based on the forecast and environmental factors in your area. Spartan Forge provides movement data that ranges from core area to full range.

“On a core area movement day, you basically have to hunt specific beds,” said Thompson. “On the other hand, deer cover much more ground during shooting hours on a full range movement day.”

Spartan Forge drills even deeper than movement, and predicts how patternable deer will be in your area considering the weather conditions on a scale that ranges from normal to very abnormal.

“The machine looks for pattern data and makes projections for your area so you can understand how to hunt,” said Thompson. “It predicts this very well, so hunters have all the tools at their disposal to make the best decision possible before heading to the woods.”

Of course, no app, artificial intelligence, or algorithm can fully predict the behavior of a wild whitetail buck. Variables that the app can’t account for (like hunting pressure, for example) often have a larger impact on deer movement in a specific area than weather across a region. And this is a good thing. From a fair-chase hunting standpoint we never want to use technology to such a degree that we’re taking away from the hunt itself. But that’s not what Thompson’s app is really doing. It’s simply predicting general deer activity, not the movement of specific critters.

Quality satellite imagery is a core function of any mapping application. Spartan Forge uses leaf-on and leaf-off imagery that allows users the ability to zoom in on an area while maintaining an incredibly detailed picture of the property. The detail is so good that users can see individual tree limbs on prospective trees where they might want to hang a stand. Currently, 40 percent of the United States is covered to this level of detail, but Thompson plans on adding more coverage soon.

If you want to level up the satellite imagery that comes standard, Spartan Forge will soon offer users the ability to buy additional custom maps on demand. All on-demand imagery is sun synchronized, which means the sun’s position is directly behind the angle of the satellite camera that captures the image of your favorite hunting spot. The result is a satellite image with minimal shadows cast from trees, terrain, or other landscape features.

“Sun synchronized imagery makes every path, clearing, or deadfall extremely visible to the hunter,” said Thompson. “Even the best imagery in the world loses detail when it isn’t synchronized with the sun.”

For an additional cost, users who wish to add additional on-demand satellite imagery can specify their preferred date and choose between leaf-on or leaf-off.

Like other apps on the market, users can save offline maps to use when cell service isn’t an option. Unlike competitors, Spartan Forge also creates an aggregate of the 10-day weather forecast and movement predictions so hunters can still leverage their intel when connectivity is limited.

“You’re getting much more than just an offline map,” said Thompson. “You’ll get an extended forecast, hour-by-hour wind and precipitation chances, maps, property data, and everything you need for your hunt.”

Like other applications, Spartan Forge allows users the ability to differentiate between public and private land boundaries. Folks hunting private land on permission can organize properties they’ve been granted access to. Spartan Forge sends a push notification to the user with the updated property owner’s information if ownership changes.

Spartan Forge will update and incorporate the new Blue Force Tracker tool soon to allow users to share data and waypoints in real-time. If you’re sharing a hunting property with a few friends, you can draw a polygon around the property and grant access to your hunting buddies. This opens the door for real-time location sharing and waypoint sharing.

“It’s like an auto-update feature for you and your hunting buddy. The person who draws the polygon is assumed to be the ‘owner’ of the spot, which allows them to restrict certain waypoints,” said Thompson. “You’ll always be able to see other users’ locations and even receive push notifications anytime they enter the property.”

Eventually, Spartan Forge will offer a free version of the Blue Force Tracker tool for landowners. Thompson hopes this feature will reduce the anxiety of landowners by allowing them to know the exact location of folks they grant access to hunt their property.

I’ve used the Spartan Forge app for about a week now. I begin planning my whitetail hunts by checking the weather forecast for basic variables like wind speed and direction and temperature. Then, I reference the movement and pattern predictions and apply the projected intel to my map scouting. Much of my hunting is done on public land, and I rarely hunt the same location more than once, so reading aerial imagery is critical for planning my hunts.

Recently, I hunted a new property for the first time. Spartan Forge predicted core area movement and very abnormal patterns. With the prevailing northerly wind direction in mind, I hiked deep into the property to a long ridge that ran east to west. I suspected bucks would be bedded on the point and stretch their legs in the final hours of the hunt as they browsed on acorns and freshened scrapes. The detailed aerial imagery helped me locate a transition from open walnut timber to a secluded pocket of white oaks. Since I hadn’t scouted the property before the hunt, I relied entirely on the imagery to locate what I hoped would be a killing tree. According to the app’s projected abnormal movement pattern, I made a few soft grunts about 45 minutes before shooting light faded. Soon after, a solid eight-point buck emerged from the leeward point of the ridge, which confirmed my suspicions that bucks would be bedded nearby. The buck made his way into top-pin distance and offered several opportunities. While I didn’t release an arrow, the encounter did give me a little extra confidence in the app. It’s a resource I’ll reference on every hunt moving forward.