7 Ways Not To Die From A Rattlesnake Bite 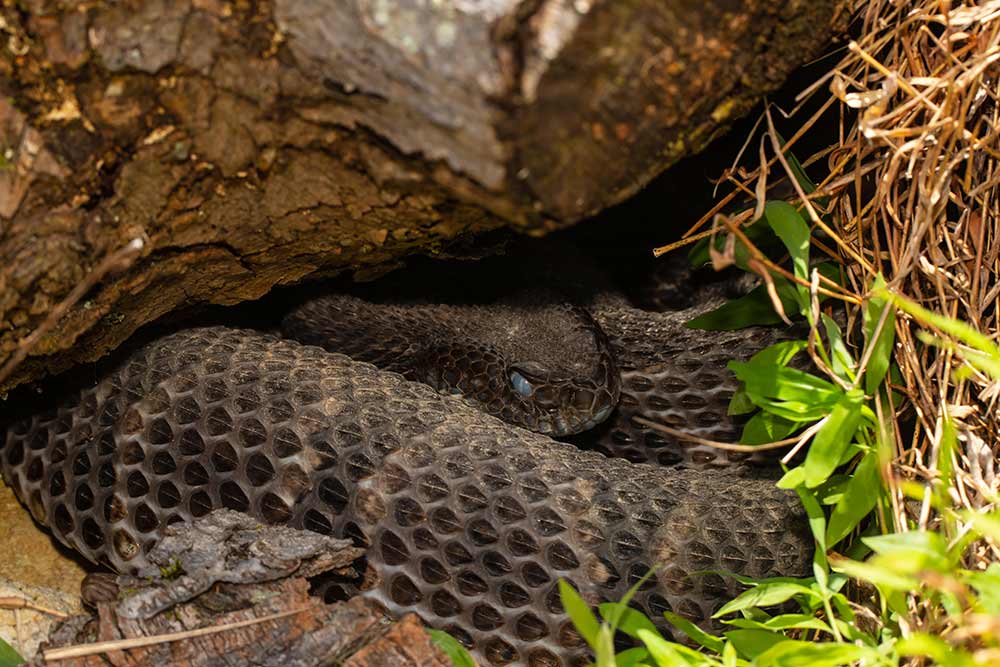 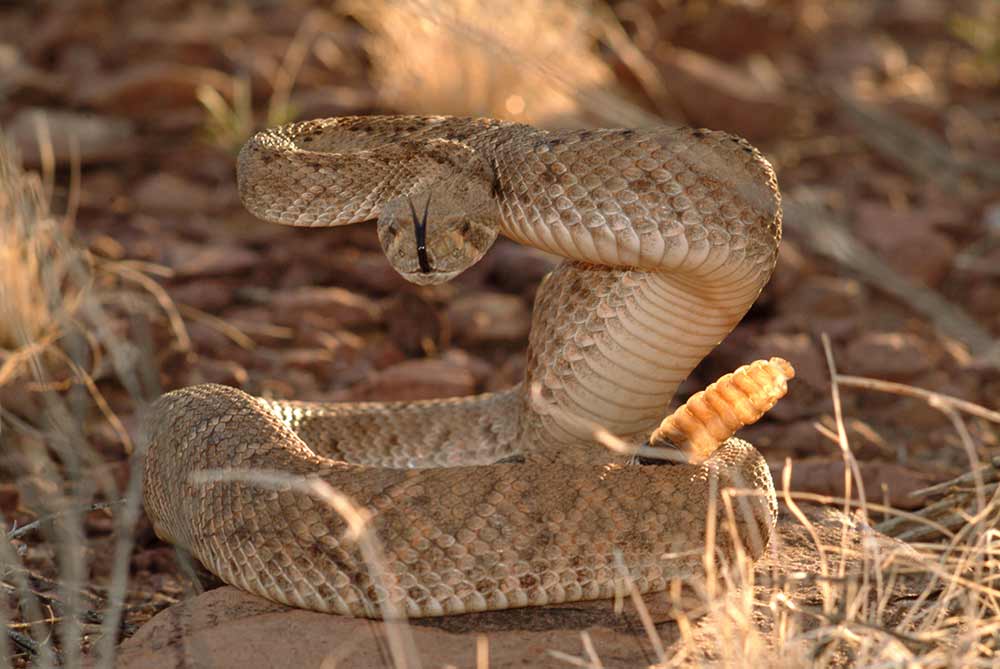 rattlesnake coiled and threatening to strike

Not all rattlesnakes rattle prior to striking. Beware of silent slitherers.

For more than three decades I’ve hunted, hiked, and rambled around woods and mountains all over North America. I’ve seen a few snakes here and there, but I’ve never even had a whiff of a close call with a venomous one.

That is, until one day last June on a remote stretch of the Appalachian Trail in Western Virginia. I saw a flash in the rocks beside the footpath and peered down at a timber rattler as thick as a forearm, coiled six inches from my right boot! With glinting hints of yellow and green in the midday sun, it was both beautiful and terrifying.

A month later on the same trail, I passed a south-bounder who said, “Careful, dude, there’s a snake a little ways back.”

A little way up the trail, I jumped two feet as a black-phase rattler slithered onto a rocky outcropping and stretched out three feet in the sun. I tapped the base of the rocks with a trekking pole, and when it slinked off into a shady crevice, I made my mad dash up the trail.

Wherever you roam, your chances of a potentially dangerous rattlesnake encounter are small. The serpents are shy by nature and do their best to avoid humans. But those two unnerving close calls seared this fact into my brain: A chance meeting with a rattler can happen when you least expect it, no matter how experienced you are in the outdoors.

Depending on which herpetologist you talk to, there are 29 to 32 species of rattlesnakes in the U.S., and they inhabit a variety of environments.

In the eastern half of the country, where I do most of my trekking, the timber rattler thrives on rocky ridges and mountain sides from 1,000 to 3,000 feet in elevation. Further south, the timber snake, along with its close relative the eastern diamondback, are at home in swamps and thick, mixed forests.

Five different species of western rattlers live in diverse habitats from sea level to 9,000 feet–from the desert to rocky hillsides and canyons, on grassy coastal plains and in conifer forests.

While you might stumble across a rattlesnake anywhere, I urge you to remember three things: rocks, rocks and rocks. The only two close calls I’ve had in decades of rambling around the outdoors occurred on prominent rocky ridges marked with crevices, ledges, and shady dens—all great hiding spots for snakes.

Keep an eye peeled as you traverse rocky habitat and your odds of encountering rattlesnakes will drop exponentially. If you’re turkey hunting, always check the ground near your setup tree and inside your ground blind before sitting down to call a gobbler.

2. Know When Snakes Are Active

Rattlesnakes typically hibernate from October to March. They emerge from their dens and begin to slither around when average daytime temperatures reach 60 degrees F. When hiking, turkey hunting, or shed hunting in the spring, keep your eyes peeled and your guard up all day long. Be especially alert on south-facing trails and ridges. Snakes stretch out on rocks in the midday sun when temperatures are cool.

In late spring and early summer, snakes become active when temperatures are around 75 to 85 degrees F. On hikes in May and June, be on the lookout for snakes slithering around all day long.

During the hottest part of a midsummer day, snakes seek the shade of rocks, logs and dense brush where they are fairly lethargic. Be aware of your surroundings, especially in and around shady, rocky areas.

Boots and socks: Low-top trail runners are popular, but I recommend lightweight mid- or high-top boots for hiking in rattler country. Wear snake gaiters or thick wool outer-socks, and pull them high and tight up your calves.

A guy at REI told me that in a tight situation, a thick wool sock could turn fangs, though Heaven forbid you or I ever have to find out!

Whenever I turkey or antler hunt in a snaky place in the spring, or bowhunt in September, I always wear calf-high snake boots.

Pants: Loose-fitting long pants are the best protection for the trail, and a necessity for hunting the woods. I wear shorts on summer hikes, but keep my wool socks high and tight just in case.

Trekking poles: Never hit the trail without them, even for a short day hike. Before stepping into brush that stretches over a trail, probe it with your poles. You can also use them to tap a rock pile or ledge where a rattler might be loafing in the sun.

When I’m shed hunting in the Appalachian Mountains, walking cross-country on rocky ridges and in thick forest, I use my trekking poles for peace of mind. If you do come upon a rattlesnake, it will be a shock. Trekking poles help you stabilize and keep your balance.

For spring turkey hunting in a southern swamp or the Texas brush country, a shooting stick acts as a “snake pole” just fine.

Rattlers love rocky cover. Be watchful of your footfalls and hand grabs.

Outdoor experts advise hikers to stick to well-used trails since rattlers tend to shy away from areas that get heavy foot traffic. That’s good advice and I get it, but I was hiking the AT, one of America’s most popular summer trails, during both of my close calls last June. You never know where you may encounter a snake, so be aware and watch where you’re walking at all times, especially in rocky areas.

When you hunt turkeys in spring, or deer in September, you are rarely on a trail. Avoid thick brush in the woods where a snake might be hiding. Detour around rock piles and ledges where snakes loaf or den, and try not to step into or over a crevice without studying it first.

The rattlesnake is an ambush predator that hides and coils beside logs and rocks. When you walk up to a fallen tree or large stone, step up on it rather than over it, as there could be a snake lurking on the other side. You might have learned this in Boy Scouts, as I did many moons ago. It’s still good advice.

After ankles and legs, most snake bites occur on hands and arms. When you come upon a steep stretch of trail that requires scrambling up and over rocks, check each ledge or crevice. Never put your hands in spots where you can’t see what might be hiding there.

Check the brush at the base of a tree with a stick before sitting down or reaching for something on the ground. Probe the brush with your pole or shooting stick before reaching too close. 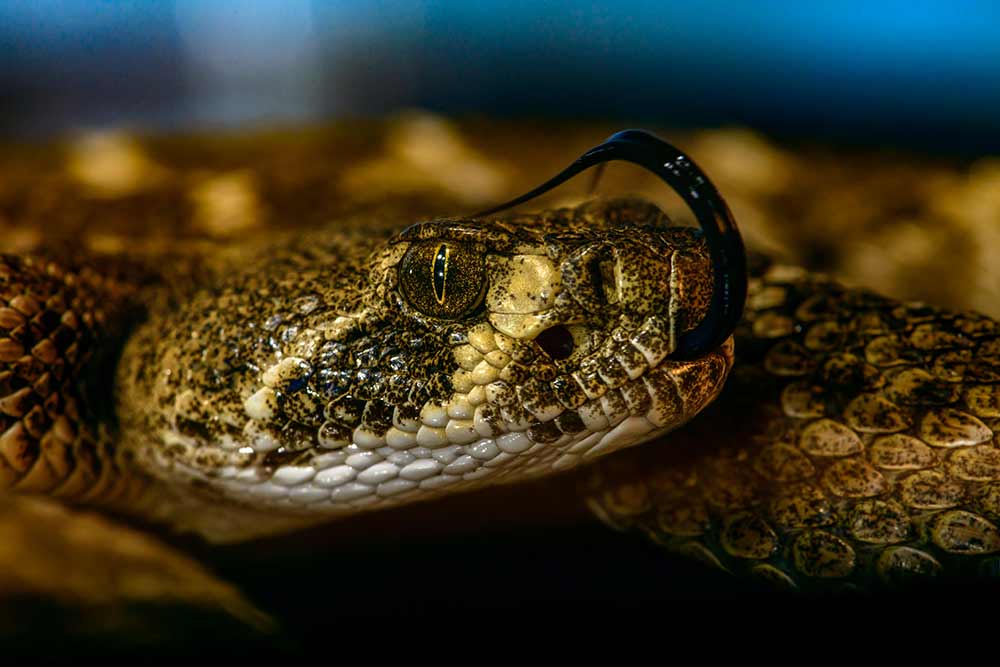 Rattlesnakes are ambush predators and lie in wait for their prey.

If you’re smart and aware of your surroundings(and if the snake gods are on your side), you’ll never encounter a rattlesnake within striking range. But if you do:

Freeze: Experts say that if you surprise a rattler in a spot where it feels threatened—you either hear him shaking or see him coiled close—the right thing to do is stop and assess the situation.

That’s easier said than done. When I saw that timber rattler coiled inches from my boot last summer, I freaked and took off down the trail at a pace that would have made Usain Bolt proud. It worked out, but you’re better off to keep your head and stay somewhat calm.

Stop, look, take a sitrep. If you can see the snake, don’t take your eyes off it. If you hear a rattle close by, pinpoint the terrifying sound and look closely for the scaled-and-banded bugger that made it.

Back slowly away from the snake or rattle with no sudden movements. Hold your trekking pole or stick between you and the snake. If it lunges, it will go for the pole rather than you.

A note here: Neither of those snakes I recently walked up on made a sound, not a single rattle. Sometimes they rattle, sometimes not, you never know.

When you are safely away, calm down, catch your breath, make a big detour around the snake and mosey on to enjoy your hike or hunt.

According to the Centers for Disease Control and Prevention, 7,000 to 8,000 people are bitten by venomous snakes in the United States each year, resulting in about 5 deaths. While chances of a rattlesnake bite are extremely slim, you need to be ready just in case.

If you or a companion is bitten, the Mayo Clinic advises: