How to Hunt Morel Mushrooms Like Your Life Depends on It 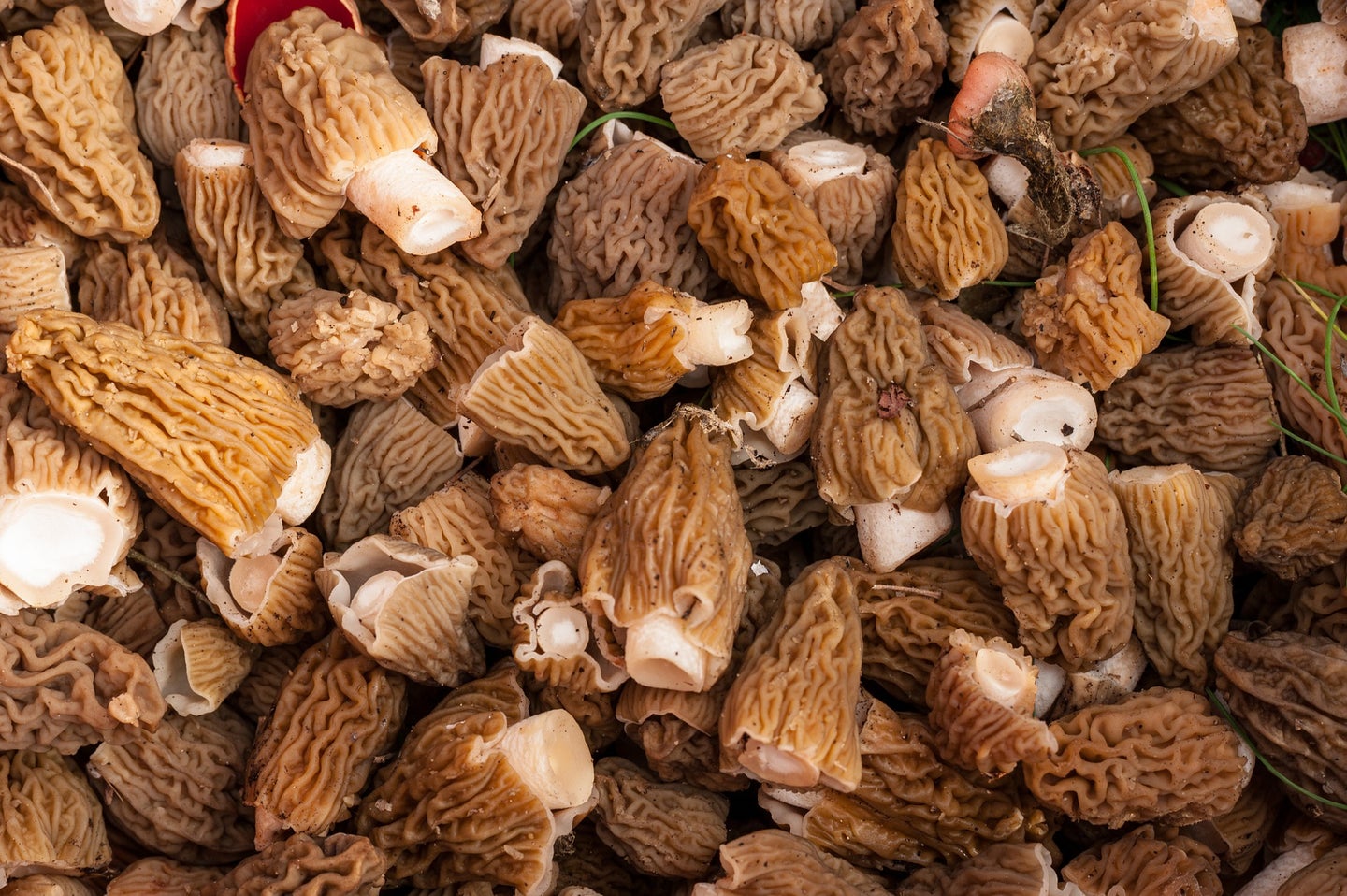 Morels don’t provide much caloric value, but they can be nutritious. Pixabay
SHARE

For those who prowl the spring woods, there are more prizes out there than gobblers and deer sheds. The morel mushroom can be found as winter loses its grip on the forests. But like any other foraged food, mushrooms pose some hidden hazards and you have to be able to locate the right species before you can make a meal out of them. It takes time and experience to become a legendary morel finder, but these tips wills shorten your learning curve.

What Is A Morel?

There are several species of edible morel mushrooms in North America, and a few toxic species that resemble the edible ones. The yellow morel (also known as the common morel or Morchella esculenta) is one of the easiest to spot. These grow in forested areas, typically in late March to May (depending on the soil temperature). You’ll find them blending into the leaf litter and growing 2 to 4 inches tall with tan, grey, or yellowish coloration. Their color (and irregular pitting) creates a very effective camouflage, protecting them against hungry creatures on two legs or four. The black morel (Morchella elata) is also worth mentioning, as it’s often the first species of the season. This one is smaller than the yellow species, with darker ridges and a yellowish color inside the pits.

Depending on your latitude and elevation, April and May are the most common months to find edible morels. But mushrooms don’t go by calendars, so the timing of their emergence is all about soil temperatures and it has nothing to do with the actual date. When spring runs early, morels will pop early. While mycologists (mushroom scientists) disagree on the exact numbers, the basic parameters are that the soil surface temperature needs to reach 60 degrees for three or more days in a row. This window doesn’t last long, especially during a very warm spring, as these mushrooms stop growing when the soil temperatures are over 62 degrees. One indicator species that also reacts to these temperatures is mayapple (Podophyllum peltatum). When this native woodland wildflower is in bloom, your area is likely to be at the right soil temperature for morels

Don’t ask a morel hunter where they go. It’s as inappropriate as asking a lady her age or for the last four digits of someone’s social security number. Morel hot spots are trade secrets and you have to be very lucky or spend a lot of time in the spring woods to find them. Not only are these mushrooms coveted for their flavor, hunters sell them to high-end restaurants for big bucks. To find your own morel hunting grounds, start by finding a hilly forest. Morels prefer the rich moist soil you’ll find in dense woodlands, but they also need a certain amount of drainage. Swampy areas aren’t a great habitat for their spores to grow, and neither is hard dry ground. Since these organisms feed on decaying wood and other plant material, looking for indicator species is also helpful. Tree species like elm and ash are common morel feeders, as are apple, cottonwood, and sycamore.

Looking for an easier way to confirm your morel identity? Get your knife out. By cutting each and every prospective morel mushroom in half, you’ll verify they aren’t false morels. Upon cutting each one lengthwise, you should see that the interior is completely hollow. The cone shaped head must be fully fused to the stalk. You can’t have the “head” detached from at the stalk at the lower edge (it will be a false morel if the bottom edges of the head don’t connect to the stalk). Just imagine you’ve taken a band saw to a hollow chocolate Easter bunny. Despite the exterior shape of the mushroom, the insides should be one continuous void. After confirming a few specimens, keep collecting. When you get home, use a soft brush to seep away any dirt. Don’t wash off the dirt, as getting them wet will only make them soggy. Cut each one in half just before cooking to ensure that no false morels are present.

Read Next: 12 Tips for Finding More Morel Mushrooms This Spring

When a possible morel mushroom doesn’t pass our “hollow chocolate bunny” test, and the mushroom’s lumpy head is only attached at the top, you’ve probably scooped up a false morel in the bunch. False morels (the Genera Verpa and Gyromitra) are typically seen in the summer and fall (not in the spring), but it’s always possible that they could be early and the edible morels could be running late. While there are multiple species of morel that are edible, there are also several look-a-likes that can range from sickening, to dangerous, to deadly. While the “bad guys” tend to have a more reddish color and an irregular shape (in addition to their different internal structure), they can be close enough in appearance that they pose a serious risk to foragers. False morels contain a poisonous compound called gyromitrin. This is both toxic and carcinogenic (cancer causing). In your body, gyromitrin is transformed into monomethylhydrazine (MMH for short). This is a component in rocket fuel, and it’s a cumulative poison that can build up and stay in your body. The more mistakes you make in foraging—the more dangerous it becomes for your health (your central nervous system, specifically).

I’ll give you the bad news first. Like most other mushrooms, morels only provide about 20 calories per 8 ounce cup. That’s not much, especially if you’re trying to be self-sufficient or if you’re lost in the spring woodlands. You’ll definitely burn more calories than you’ll acquire hiking up and down the hills to find these elusive little nuggets. Now for the good news: because morels usually grow in excellent soil, they take on a multitude of minerals from that rich dirt. Their nutritional value will vary as the minerals in the soil vary, but these mushrooms typically provide a generous amount of iron, copper, manganese, phosphorus, and zinc. Morels also provide small amounts of potassium, magnesium, calcium, and selenium. They even contain a few vitamins, such as vitamins D and E, and B, folate, niacin, riboflavin, and B6.

Finding and Caring for Morels

Zero in on this tasty mushroom species and treat them right during collection.

Be Safe Out There

Before you head off for your secret morel mountain, make sure you keep these safety tips in mind.

Even edible mushrooms can contain small amounts of toxicity. Black morels are one of the most common morel species that people will cause an allergic reaction in sensitive individuals. For that reason, I recommend that all mushrooms be cooked, as certain mycotoxins can be destroyed by heat. You’ll also want to avoid any alcohol in the cooking process. Sure, mushrooms sautéed in wine are amazing, but alcohol is also an amazing solvent and it can draw some toxins. For best results, build your flavors with things like onion, butter, or bacon. I love to go camping with a few strips of salt cured bacon. This heavily salted cured meat is delicious and it doesn’t require any refrigeration. I like to fry a few strips until the bacon crisps, then take it out of the pan (leaving the grease in place). Once cooled, I’ll crumble the bacon and begin frying the sliced morels in the hot bacon grease. Treat it like a quick stir fry, moving the mushrooms around in the pan for about 5 minutes. Top them with the crumbled bacon and dig in.