The Most Dangerous, Venomous Snakes in the U.S. 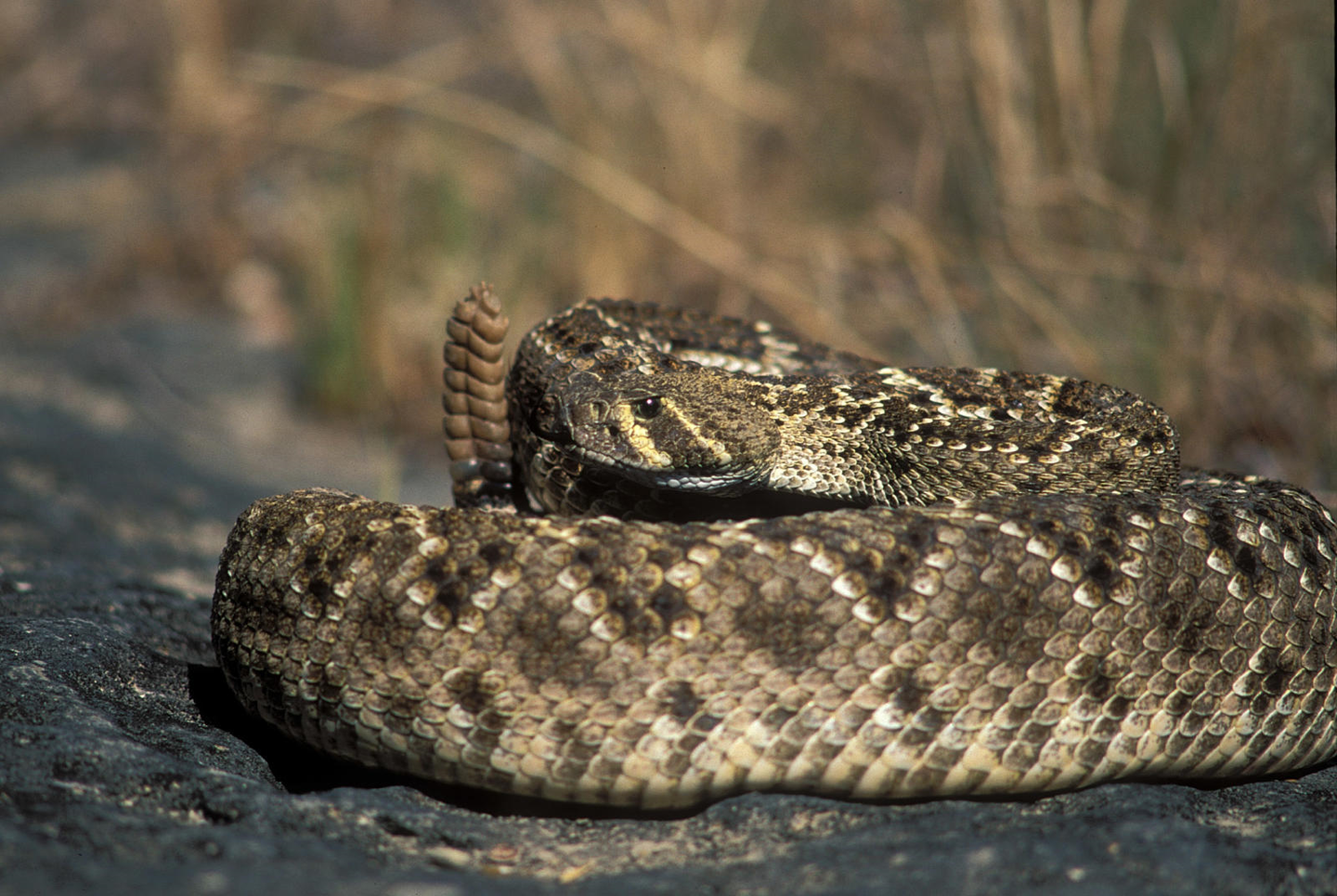 The prickly disposition of the western diamondback rattlesnake seems to match its cactus strewn home in the deserts and adjacent habitats of the Southwestern U.S. Texas Parks and Wildlife
SHARE

Even though there are only a few dangerous snake species in the continental United States and Canada, these slithering creatures still inspire an ancient and instinctive fear among outdoorsmen and women. This dread around venomous snakes can be well founded, getting bitten by one of the following snakes could kill you, or at least wreck your day. Yet this fear of snakes often spills over as a prejudice against harmless snake species. So let’s focus on the serpents that can cause harm, as we take a look at eight of the most dangerous snakes that are native to the U.S.

The copperheads (Agkistrodon contortix) are members of the viper family (Viperidae) and they are a common snake species in the American Southeast. There are five known subspecies of copperhead in United States, bearing various cross-band patterns of pink, tan, brown, bronze, and copper (hence the name). Typically smaller snakes, the largest copperheads may reach a maximum length of 3 feet when they are well fed. These animals usually prefer woodland terrain and swampy conditions, though they can be found near rocky outcrops, stone ledges, and wood piles in other habitats. Generally timid, this species is known to lie still when humans approach, relying on their excellent camouflage to avoid detection. In the event that the snake does bite a human, symptoms can include severe pain, muscle spasms, swelling around the bite location and adjacent tissues, stomach cramping, nausea, and possible allergic reaction. Fortunately, these bites are uncommon and rarely fatal. Adult copperhead snakes may also bite without delivering much (or any venom). Commonly called “dry bites” and they are simply a warning shot to ward off people and predatory animals.

The cottonmouth snake (Agkistrodon piscivorus) is sometimes called the “water moccasin” and it is a viper family member found mainly in the American Southeast. The species name “piscivorus” is a reference to the diet of this aquatic serpent, as it feeds on small fish (as well as small mammals, birds, and frogs). It is also the world’s only semi-aquatic viper, favoring swamps, lakes, slow flowing rivers and similar bodies of water. Cottonmouths can reach much larger sizes than their smaller copperhead cousins. Lengths of 6 feet have been confirmed, and their temperament is often much more aggressive than other snakes. Cottonmouths have a brown or black primary scale color, with cross-bands of lighter colors like tan and grey. The bite of a cottonmouth can create deep bruises, swollen tissue, intense pain, difficulty breathing, and tissue death (necrosis). Severe bleeding can also occur, as the snake’s venom contains toxins that keep the blood from clotting. Their bites can also create significant damage to the skin and underlying tissue, sometimes resulting in permanent scaring or worse (amputation of extremities).

While the tiger rattlesnake (Crotalus tigris) is regarded as the second most toxic American rattlesnake species, these animals rarely reach three feet in length. This diminutive size is a good thing, as it limits the amount of venom the snake can deliver. Gram for gram, the venom is the second worst rattlesnake venom in the U.S., containing numerous neurotoxins and myotoxins. Thankfully, bites are rare and with the low volume of venom delivered, it’s rarely a fatal envenomation. Recorded bite symptoms include pain and swelling at the bite location, and significant to severe pain. Children, slender adults, and those who have an allergic reaction to the venom are at the greatest risk. This species is found in the American Southwestern and in Northern Mexico. You won’t miss the fact that’s it’s a rattlesnake, with its spade-shaped head an obvious rattle. Don’t worry. This colorful snake (adorned with cross-patterns of pink, lavender, and other colors) is much more interested in eating rodents and lizards than taking a bite out of you.

The Southeastern United States is home to the eastern diamondback rattlesnake (Crotalus adamanteus), a creature favoring southern forests, palmetto groves, marshland, and grassy areas. This highly venomous snake species is one of the largest native snakes in North America. Larger specimens can exceed 8 feet in length and weight more than thirty pounds. If the large rattle and considerable length don’t identify this species for you, the diamond shaped pattern of browns and greys along the back will do it. The diamondback hunts rodents, lizards and ground feeding birds for its food, relying on ambush tactics and potent venom to make up its slow speed. When a human is bitten by one of these large vipers, the large fangs can deliver a massive payload of toxins. Bite symptoms in a human can include severe bleeding, muscle spasms, pain, a nauseated feeling, vomiting, and abdominal cramping. Due to the large venom volume that this species typically delivers, human fatality rates can exceed 25 percent of bite cases where antivenom is unavailable.

The western diamondback rattlesnake (Crotalus atrox) is sometimes called the “Texas Diamondback,” though it can be found in the deserts, grasslands and forests of the American Southwest and Northern Mexico. While this cousin to the eastern diamondback wears a similar pattern of diamond bands down its spine, the maximum size of the western diamondback is a bit shorter than the eastern species (maxing out just shy of seven feet). This feisty snake spends most of its time in rocky areas hunting a wide range of rodents and small mammals. The venom of this snake is more than capable of knocking out small prey, and inflicting major damage to larger creatures (like humans). More complex than most North American venoms, the western diamondback venom contains the typical hemotoxins, along with cytotoxins, myotoxins, and other damaging substances. These bites can cause severe bleeding, internally and externally. Swelling, bruises, blisters and other skin damage are common. Other symptoms include headache, vomiting, dizziness, and diarrhea. When untreated by antivenom, human fatalities may occur in 20 percent of bites.

The eastern coral snake (Micrurus fulvius) is not a creature to be under estimated. With nicknames like the “American cobra,” this member of the Elapidae family (a group including all cobra species and the black mamba) delivers enough venom in a full adult snake bite to kill several adult humans in just a few hours (without access to medical care and the correct antivenom). These snakes are found mainly in the Southeastern U.S. superficially, coral snakes resemble scarlet kingsnakes, which also have alternating stripes of red, yellow and black. The old rhyme – “red on yellow, kill a fellow; red on black, friend of Jack” may offer some service to outdoor enthusiasts. When the red and yellow bands touch, it’s a coral snake. When the red and yellow bands are separated by a black band, it’s a harmless look-a-like species. Full sized adult snakes may reach 30 inches in length and bites are rare (less than 100 per year, on average). These animals are not known for being aggressive, and as many as forty percent of bite are “dry bites,” injecting little or no venom.

Found in the Eastern United States, the timber rattlesnake (Crotalus horridus) can grow to lengths of five feet when well fed on its typical diet of rodents, birds, lizards, and other small quarry. These medium to large snakes bear the typical rattle of their kind, with an overall brown coloration that includes crossbands of grey, black, and yellowish brown. Often living in rugged and rocky woodland terrain, these animals typically avoid high traffic areas and people. Bites to human victims can include the typical rattlesnake bite symptoms, such as swelling and pain. Timber rattlesnake bites in humans can also cause blood clots and chest pain, as well as digestive distress (like nausea, vomiting and diarrhea). Timber rattlesnake bites are rarely fatal to humans, but they are still exceedingly painful and should be treated ASAP by medical professionals.

The American Southwest and Central Mexico are home to the Mojave rattlesnake (Crotalus scutulatus), which is regarded as the deadliest native snake species in North America. The maximum length of this snake is around four feet, and its color varies somewhere between shades of brown and green. The large rattle and whitish tail banding make this particular species very identifiable. The potent venom of this medium sized viper is reminiscent of cobra venom in its toxicity and bite symptoms may actually be delayed for a few hours. This can lull bite victims into a false sense of security, until the real symptoms start to manifest. Those bitten may experience trouble seeing, breathing, and swallowing. Weakness, spasms, and severe pain are likely to follow. If treatment is unavailable, the neurotoxins in Mojave rattlesnake venom can cause cardiac arrest or respiratory failure in just a few hours.

How to Avoid a Snake Bite

With all of the diverse species of venomous snakes across you North American continent, you’d expect the strategies for bite avoidance to be equally diverse. Happily, this isn’t the case. A little common sense can spare us a lot of pain and suffering. Be careful where you step in snake country and watch where you put your hands. The vast majority of venomous snake bites occur below the knee. This is due to stepping on a well camouflaged snake, injuring the brittle boned creature and inspiring a retaliatory bite. It also happens when snakes are startled by movement nearby, like you walking down the trail. If we make noise as we walk, poke the vegetation with a walking stick, and watch where we step, we can avoid this unfortunate interaction with the local wildlife. Similarly, if we watch where we put our hands, we can avoid a bite on the forearm, hand, or fingers.

What to Do if You’re Bitten By a Snake

Skip the nonsense where you cut and suck a snake bite. And those suction kits aren’t much better. You’ll only get a tiny fraction of the deeply injected venom (maybe a tenth of a percent of the venom). You don’t want to apply a tourniquet or ice the wound either. Whatever else you do, don’t try to “capture the snake” so you can take it to the hospital for proof of species. The medical professionals in the ER do not need to see your dead snake, and they certainly don’t need a live one escaping in the building. In the rare event that you get bitten by a venomous snake, the local medical professionals only need to know the color of the snake. The bite from a brown, black or “camouflaged” snake will be from a pit viper (like a rattlesnake, cottonmouth or copperhead) and these all respond to the same antivenom. The bite from a red, yellow, and black striped snake will be a coral snake (much more dangerous and requiring different treatment). Whichever species bites you, get away from the animal and stay calm (to keep your heart rate down). Take off your rings, watches and jewelry, to prevent extra tissue damage when the swelling begins. Cover the bite with a clean dressing, and get to a hospital as soon as possible. The CDC averages show more than 7,000 venomous snake bites in the U.S. annually, but the number of fatalities is tiny (about 5 people per year). Stay calm, get to the hospital, and you’ll beat the odds.