Shotgun Champ Goes Out With a Bang

Tony Mullan had a simple, if unusual, request for his friends. On his deathbed, the former Irish shotgunning champ asked... 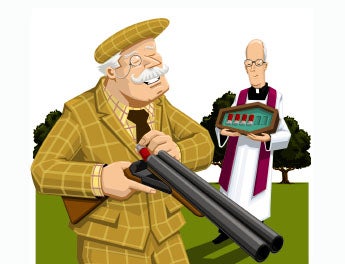 Tony Mullan had a simple, if unusual, request for his friends. On his deathbed, the former Irish shotgunning champ asked that his ashes be loaded into shotgun shells and fired over some of the shooting grounds he had known and loved over the years. After Mullan died at age 63 last Easter, Willie Hughes, a close friend and shooting partner for more than 20 years, was happy to oblige. “I took the lead out of fifty cartridges, put Tony’s ashes into them and recrimped them, and now every ground I go to I fire one off,” Hughes told Reuters. “Tony would have done the same for me.”

Mullan represented Ireland twice in the World Cup shooting championship. Some of Mullan’s ashes will also be incorporated into some clay pigeons that his friends and family plan to use at a memorial shoot later this year, according to Reuters.