On April 18, 1942, Lt. Col. James Doolittle led a squadron of 16 heavily modified B-25 Mitchell bombers off the deck of the USS Hornet to conduct a strike on the Japanese mainland. The Doolittle Raid was an audacious long-range attack that gave a tremendous psychological boost to the U.S. war effort and put the Imperial Japanese forces on notice that we could reach out and hit them from a distance that was previously unimaginable.

It is in the spirit of that accomplishment that I designed this rifle, whose large 225-grain .30-caliber bullets impact like miniature bombs on steel. Beneath its World War II aircraft–themed paint job—which includes, of course, a flirty pinup girl—the rifle incorporates some of the best new technology for shooting at extreme ranges. As Doolittle did with his B-25s, I wanted to push this rifle to the limit and see whether I could get it to live up to the bold proclamation emblazoned on its side: Long Distance Operator.

Consistency. If you don’t have that when you’re shooting at long ranges, you don’t have squat. Anyone who has received competent ­instruction in rifle marksmanship has heard this in one form or another. Sight alignment, breath control, trigger press, body position, rifle hold—they all need to be consistent for you to hit your target. At 100 yards, consistency is important. At 1,000 yards, it is critical. But at 2,000 yards? It’s a whole other ball of wax.

I was thinking about this while staring through the scope on the new ­single-​shot rifle I had had built while trying to read the mirage dancing around the target, a small white speck of steel that stood 6,000 feet downrange. Every component of the build was selected to be able to accomplish the task, but when shooting at ELR (extreme or extended long range) distances, there simply isn’t any margin for error. (By “extreme,” we typically mean distances at which the bullet transitions from supersonic to subsonic speeds. With this rifle, that’s at about 1,600 yards with the 225-​grain bullet.)

I shoot in tactical steel matches—​PRS-type competitions—where we rarely take a poke beyond 1,300. To get dialed in for two grand, I got some coaching from Derek Rodgers, an F-Class champion and ELR competitor who knows the finer points of shooting prone. He also helped design the stock from ­McMillan on my rifle.

The very light pressure my cheek and shoulder were exerting on the stock—not free recoil, Rodgers emphasized—felt odd at first. And it was difficult to resist the urge to squeeze the rear bag to fine-tune the elevation of my crosshairs. Instead, Rodgers instructed me to slide the stock, which has a 5-degree angle along the toe, back and forth through the ears on the rear bag, from Edgewood, to correct elevation.

Normally, I’d tell you the only real challenge with long-range shooting is the wind, that we have elevation figured out, thanks to the sophisticated ballistic calculators. But at 2,000 yards, that doesn’t hold true. Since muzzle velocity will vary from shot to shot, so will the vertical portion of the bullet’s trajectory. It isn’t usual with good factory ammo (or handloads, for that matter) to have a 30 fps spread in MV over 10 shots. At 1,000 yards, that hardly matters. A shift in MV of 10 fps, for instance, translates to just an inch or two difference in vertical with the 300 PRC. At 2,000 yards, it is a different story: That same 10 fps shift changes the vertical impact by 14 inches or more.

The design behind the 300 PRC was meant to tailor the size of the case to available propellants in order to keep the pressures (and, hence, muzzle velocities) consistent from shot to shot—something that other .30-caliber magnums can struggle with.

Then there’s the wind. A very good shooter can read wind downrange through mirage and other indicators to within 2 to 3 mph. But at 1,000 yards, being 1 mph off in the wind call makes a meaningful difference even with the efficient 300 PRC—to the tune of 4½ inches of horizontal. At 2,000 yards, that slight misreading of the wind is almost catastrophic: The 225-grain bullet will get pushed by an extra 2 feet.

There isn’t anything magic about the rifle, but I did have the 28-inch Bartlein barrel cut with a left-hand gain twist, with the twist increasing from 9.5 to 8.46 inches. I did this as an homage to Harry Pope, one of the greatest barrel makers of all time, who crafted record-setting barrels in the late 1800s and early 1900s with left-handed gain twists. With such great gear, my refined prone shooting technique, and, hopefully, the shade of Harry Pope steadying my aim, how could I miss? The answer is: easily. That 24-inch target didn’t ­offer much surface area.

But with the help of a chronograph that let me compare the muzzle velocity of each shot with its impact, and some astute diagnostics of the wind (there was actually an updraft I had to contend with that threw me off until I figured it out), I managed to hit that target and trigger the flashing red indicator light that confirmed my impact. Soon I got into a groove, tripping the light repeatedly, so I can say, yes, this is indeed a 2,000-yard rifle.

Read Next: The 6.5 PRC is a Hard-Hitting, Long-Range Round for Hunting and Competition

Devil in the Details

This 300 PRC isn’t just a rifle, it is a shooting system. All the components highlighted here—other than the paint job—have to work in harmony in order to achieve long-range accuracy. 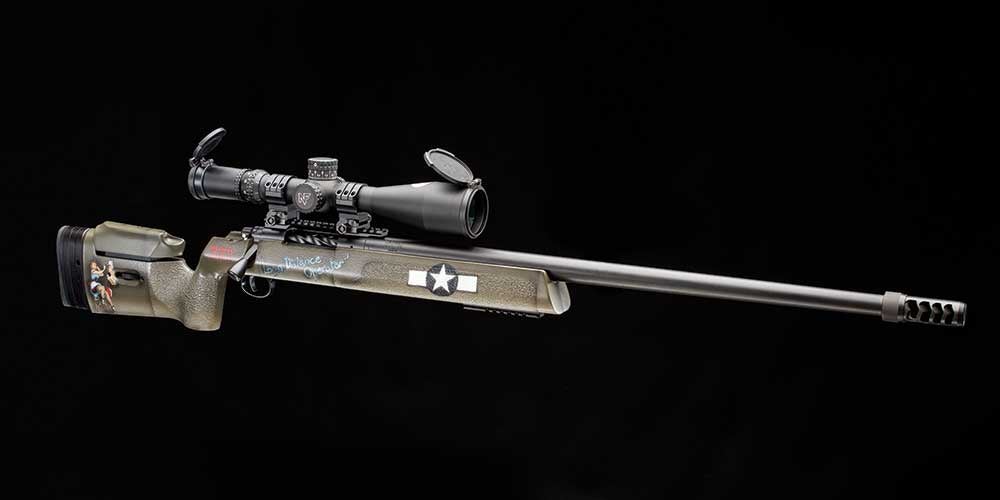 The Heart of an ELR Rifle

The 40-X is one of the most highly regarded actions among precision rifle shooters and is the heart of this 300 PRC. All 40‑Xs are made by Remington’s Custom Shop, and though they are nearly identical to the Model 700 action, they are machined to tighter tolerances for finer accuracy. Observant readers might say that the 40‑X is offered only in short-action (.308) lengths, but contrary to that widespread belief, this isn’t actually the case. While long-action 40‑Xs haven’t been sold commercially before, a handful have been made and used for special projects, including the one on this rifle. 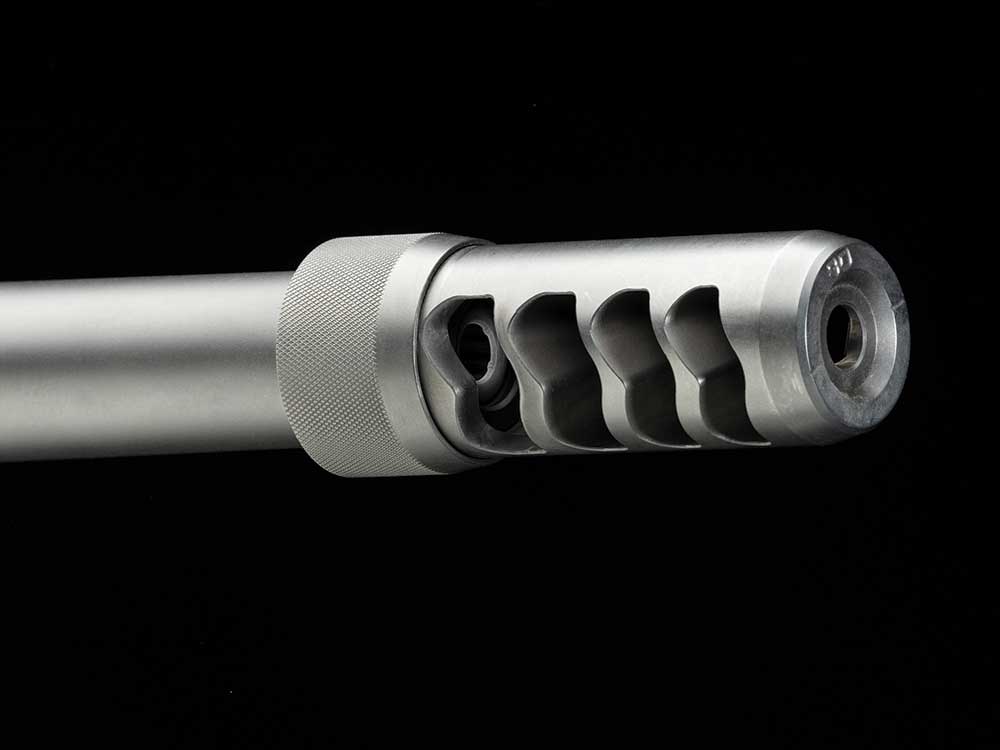 The Sidewinder from Area 419 has four ports on either side that vent gasses toward the rear and substantially reduce felt recoil. The brake has a self-timing feature that makes for easy installation. After the base is attached, the brake can be screwed on and centered before final tightening. It takes about a minute to correctly level and install. ($195; area419.com) 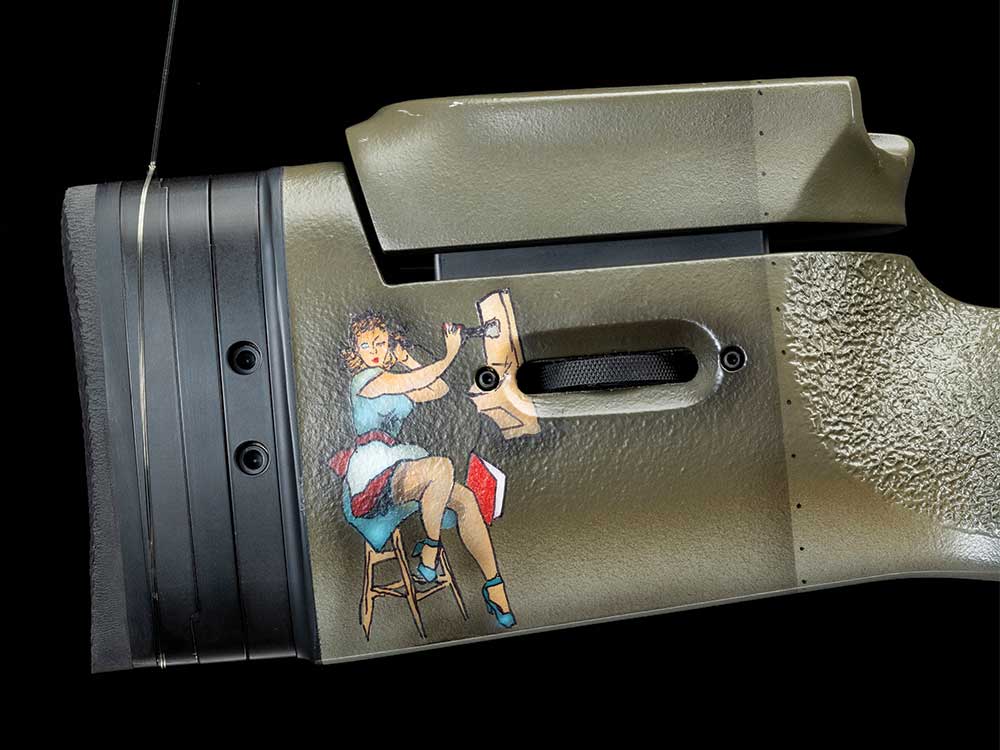 The most stunning element of this rifle build is the artwork that adorns it. Jeromy Holmes is an insanely talented artist from St. George, Utah, and he is the one who brought the World War II theme to life on the 300 PRC. Whether he’s painting the fetching pinup girl or the subtle panel and rivets on the stock, Holmes is a singular talent. ­(Instagram: @killerstocks) 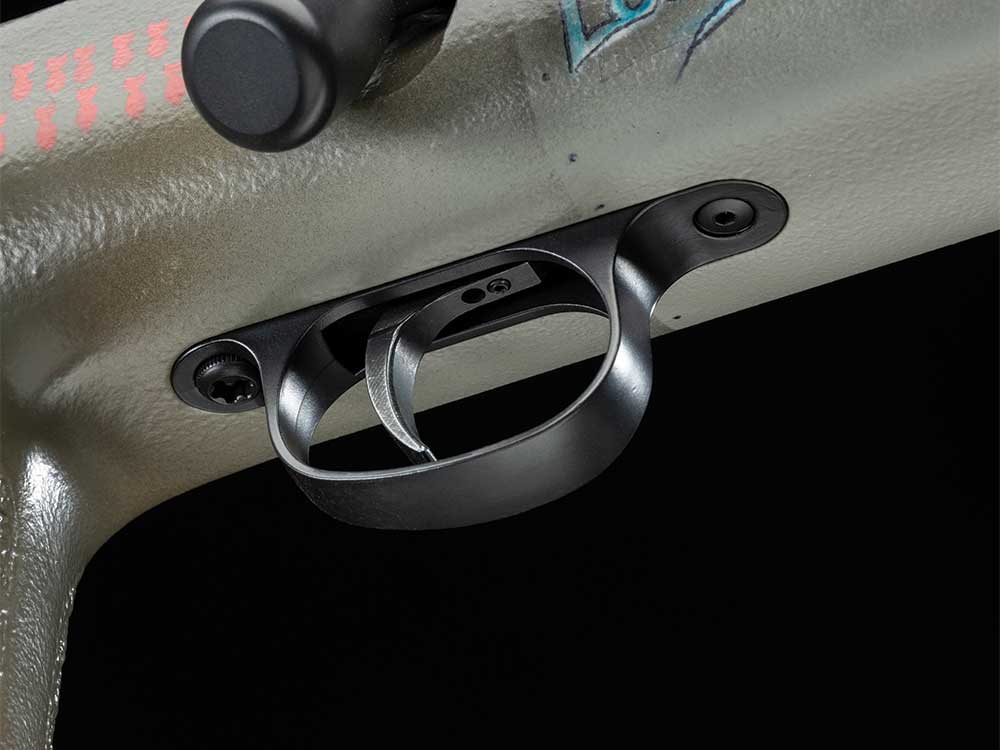 You won’t find a two-stage trigger that offers better control than this. The first stage on mine requires exactly 1.5 pounds of effort to take up the slack. And at 1 pound 10 ounces of pressure—no more and no less—the trigger breaks. The trigger’s weight can be tuned for your own needs, but that 2-ounce differential is perfect for prone ELR shooting. ($350; x-tremeshooting.com) 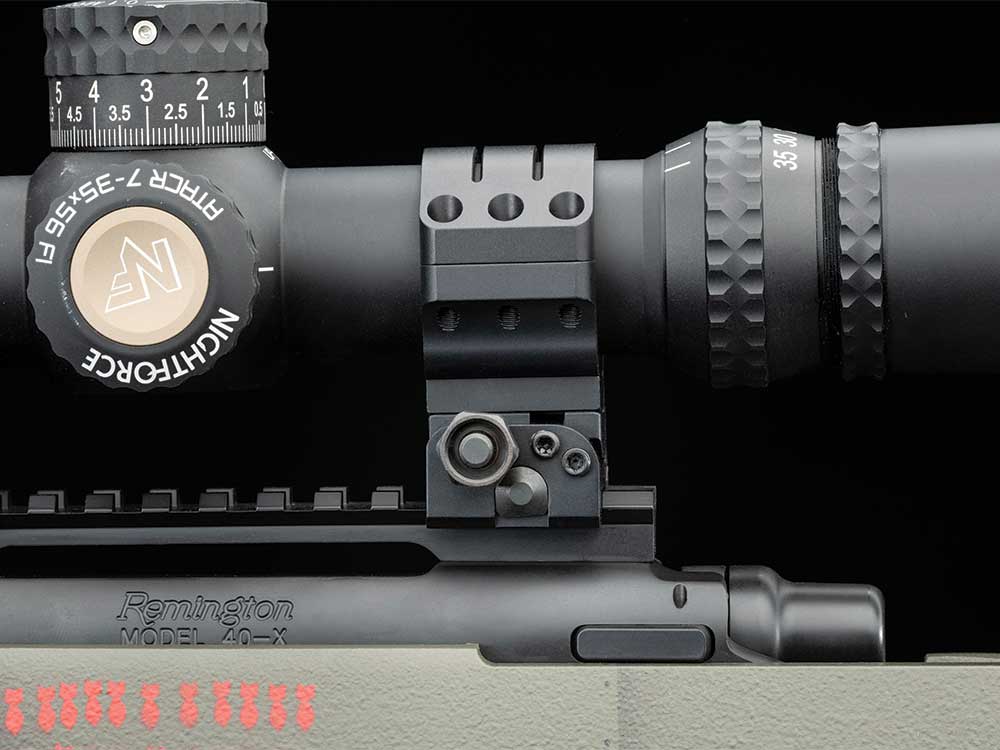 These innovative rings pivot in order to angle the scope downward so the rifle gets the maximum elevation travel from the scope. After dialing all the elevation out of the Nightforce 7–35×56 ATACR, I adjusted the rings for a 100-yard zero. That left me with 37 mils of elevation—enough to shoot to 2,400 yards without needing to hold in the reticle. ($400; ­warne​scope​mounts.com)

Champion long-range and F-Class shooter Derek Rodgers helped design this stock for prone shooting. The 5-­degree angle on the toe allows for fine elevation adjustments with a rear bag. The stock dimensions can be tuned for length of pull and comb height as well. (From $585; mcmillanusa.com)

This scope is the flagship of the renowned ATACR series and was designed specifically for long-range work. The Mil-C reticle has a small aiming point in its center for exact shot placement, while the windage and elevation controls are positive and precise. ($3,492; nightforceusa.com)

Lots of barrels are called match grade, but the only ones that qualify are those that actually win matches—which Bartlein does. I ordered my barrel with a left-hand gain twist (9.5 to 8.46) that is fast enough to stabilize the large 225-grain .30-caliber bullets in the 300 PRC. (From $345; bartleinbarrels.com)