How to Keep from Spooking Fish

The sights and sounds that send fish scattering. Find out what puts fish at ease or sends them away. 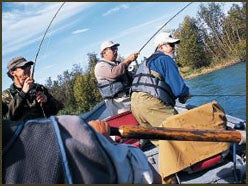 Funny how some seemingly inconsequential event will stick in your mind for decades. Like that late afternoon when Don and I left the big western river we’d been fishing and strolled into a nearby watering hole. The place was a cowboy saloon that cranked up pretty good in the evenings, stacking them three deep at the bar. But at the moment things were quiet and fairly empty, except for two comely ladies sipping tall, pastel-colored beverages at a corner window seat. I was a single lad then, and as we sidled to an adjacent table, Don offered a classic: “Easy, boy,” he rumbled, “don’t flush ’em.”

In retrospect, that little vignette may have been my first lesson in not spooking fish. You can read reams of erudite studies on fish vision, their ability to sense sound or smell, their “fear reactions,” etc., until you’re nearly comatose. But what science calls “anecdotal evidence” — that is, years of hard-core angler experience — points to one thing: It’s the environment, the given situation you’re fishing, that determines whether your actions send fish away or put them at ease. Kind of like making a move in a cathedral-quiet bar.

Noise Pollution
Why is it that sportsmen who are meticulous about stealth when they hunt become moose in a curio shop when they fish? Maybe the physical separation of the two media — air and water — lends a false confidence to their fishing, a feeling that we’re separate and, therefore, hidden from our quarry. That perception may hold true for deep-holding fish and fish in rough, dirty water, but in clear, shallow water and fairly calm conditions, a clumsy approach can blow your chances without you ever knowing it.

Consider the business of noise. Everybody knows that banging and scraping an aluminum boat isn’t a bright idea when you’re easing into a glass-slick cove. What’s less well known is how veteran anglers deal with such situations: how they lower their electric motors early to lessen any aural impact the rig might make as it locks into place, or how they coast on forward momentum toward the spot (because stop-starting electrics in a hushed environment alerts fish) or, when the bottom’s not gravel, how they pole their way into position.

And what of talking loudly with your partner, or a radio blaring? Can fish hear above-water sound? You bet they can. That fact was driven home when I was experimenting with one of the early rattle plugs on Alaskan king salmon. Halfway through my retrieve, I could actually hear the lure sounding like so many dry bones shaking in a shaman’s spell bag. If I could hear those rattles coming from several feet below the surface, what, I wondered, could fish hear coming from above the surface?

I was a diver then. So, to answer my own question I pulled on the scuba gear, went overboard and suspended not far beneath the surface of a lake while several friends in a boat exercised their vocal cords. Yes indeed, I could hear them. In the years that followed, while fishing in clear, shallow water where I could see fish, I realized I was able to spook tailing redfish, bonefish and even cruising carp with a shout. Many of those fish veered off, but even the ones that hung around went through a change of attitude. Over the long haul, I’ve come to believe that such an awareness of something new in their environment makes fish more difficult, perhaps impossible, to catch. Some good anglers I know feel that even sharply stripping out line against a loud clicking pawl on a fly reel can spook bonefish in ultra-shallow water. All of which leads me to one point: Excited as you are at the sight of approaching fish, keep your yap shut.

I’ll admit that some fish species are less sensitive to sound than others. A few are even curious about noise. In my diving experiments I was able to bring smallmouth bass in like chickens at feeding time simply by clicking rocks or banging on my air tank. That’s not aan entirely original discovery: In low-visibility river situations some anglers catch smallmouths by stirring things up with their outboards, or by banging their aluminum boat into the rocks. In salt water, churning up a flounder area with the outboard often gets the flat fish noshing. And wading downstream kicks up bottom organisms as well as pebbles and regularly triggers a trout feeding binge below your position.

But such ploys must be used judiciously, and with the specific environment in mind. Imagine those smallies in ultra-clear shallow water. Here, sudden sights and sounds will send them off, just as, well, the sights and sounds of a couple of unshaven anglers might send a couple of solo women from a quiet saloon.

The Vision Thing
Visually alerting and alarming fish is easy to do, too. A long time ago I was photographing a veteran angler across a steelhead river in British Columbia. He was laying out cast after beautiful cast when suddenly a laser-bright glint shot across the viewfinder. It happened again. When the third pulse almost singed my retinas, I realized that the clippers, forceps or some other bright-steel tool pinned to his vest was reflecting in the sun. Since then I’ve been hypersensitive to shiny objects. I’m convinced that brightly finished reels, high-gloss rods and even highly polished guides do untold damage in clear, shallow water.

I know from anecdotal evidence that white and brightly colored shirts spook fish. But it remained for colleague and Gray’s Sporting Journal editor James Babb to perform the most telling anecdotal experiment to date.

James marked off distances from his backyard brook trout pond and made sneak approaches to see how close he could get before flushing the fish. The worst results occurred when he was fully front-lighted wearing bright solid colors. Hats definitely made a difference: green, blue and black plaids were better than solid colors. Camo clothing, if it matched the background, fared the best. The distances he achieved ranged from a poor 65 feet in gaudy garb to a comfortable 15 feet in camouflage. And when Jim camouflaged his hands with gloves and wore a mesh face mask, he was able to sidle up to within five feet of the trout.

I’m betting that there aren’t many trout anglers willing to dress like turkey hunters, but somewhere between the full-camo extreme and your Don Ho ensemble lies a fashion medium that can swing your odds of success in the right direction.