Photo by Charles Waldorf For the past 10 years, the international icefishing community has gathered on frozen lakes around the... 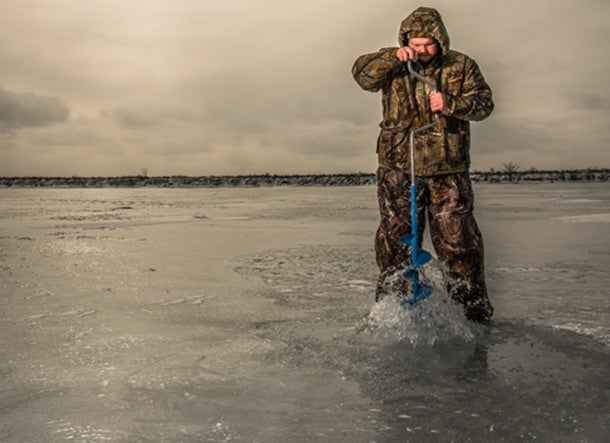 For the past 10 years, the international icefishing community has gathered on frozen lakes around the world to battle it out in the World Ice Fishing Championship. Who knew?

Although limited to minimal gear, these competitive ice anglers wage a pitched battle for fishing supremacy utilizing strategies that are both cutting edge and, mostly due to competition regulations, ultra-simple. We spent three frenetic days on the ice with Team USA, and what we learned is sure to help you catch more fish this season.

“This,” says Polish coach Zibi Wojcik, “is an all-out war.” Whether Wojcik is prone to hyperbole or not, the World Ice Fishing Championship competition is certainly physical and intense, with fishers, as they are called, racing on foot from spot to spot, using only instincts and observation, drilling holes as fast as they can churn their hand augers, fishing with one eye on their own line and the other glancing continuously to see who might be catching fish. There are lessons to be learned by regular anglers, but the sport is compelling to watch on its own merits, too. Each country puts out its top five fishers, one in each designated area, and they go head to head during a three-hour period, with no timeouts or breaks. No electronics (sonar, GPS, etc.) are allowed. No power augers, either.

Last February, teams from 12 countries met on a lake in Wisconsin to fish for the World Ice Fishing Championship. The Russian team won gold, followed by Finland, Lithuania, and the U.S. We were there, looking for insights into what makes these guys so special. Even more important, we wanted to glean practical advice from those anglers, who are capable of catching lots of fish quickly without the use of technology. So just in time for ice season, here are the habits, skills, and mindset tips that will have you icefishing like a champ.

Don’t Stop Moving
This isn’t a new idea–Dave Genz, the father of modern icefishing, has been preaching it for 40 years. But moving until you find biting fish, then moving again as soon as the bite slows, is the most universally ignored advice on the ice.

In practice and during competition, the American team was a study in mobility. They marched across potential fish-holding areas methodically, using a timer to make certain they never stayed in one spot for more than 10 minutes. Over the course of several days the team worked meticulously to identify productive zones.

“It’s a mindset,” says Mike McNett, Team USA ice division director. “You have to go out there thinking that you’re going to drop [a bait] to as many fish as possible. It’s preparation, too. Our rods are rigged and ready. It’s all the things we do to take the luck out of fishing. Details are important, because of the small distance you cover fishing one hole at a time. You have to fish a lot of holes to cover a lot of ground.”

In some respects, it seems odd to even care about wind when the lake you’re fishing on is covered by a foot of ice, but it should nevertheless be part of your strategy, as it is for big-picture strategist Brian Gaber, Team USA coach.

Under high barometric pressure, you might decide to use smaller jigs and slow your presentation.

Two masters of the sport, Genz and Mike Boedeker, are advocates of a style of icefishing called tightlining. They practice it slightly differently, but it comes down to relying on a direct connection to the fish.

Boedeker, a co-captain of Team USA, practices Michigan-style tightlining, which features fluorescent line for enhanced visibility. He matches line diameter to jig weight, “so the jig does not overpower my line,” he says. “I want the jig to sink but not to pull the line really tight.”

He gets the jig to the desired depth (using a flasher when he’s not in this competition), then focuses on observing the line and its movements as far down into the water as possible.

“I’m watching for anything the line does that I’m not doing to it,” Boedeker says. He constantly moves the rod tip and scrutinizes the line for subtle movements he did not cause, indicating that a fish has sucked in the bait.

Key things to look for include slack in the line (showing a lift bite); the line moving toward the side of the hole; twitching, jumping, or tightening.

On many waters, traditionally good locations draw anglers, sometimes by the hundreds. Community spots often produce well, especially early in the season, and then the action slows. American co-captain Myron Gilbert has a proven system for catching fish when heavy traffic on the ice makes fishing tough.

“Fish have two sanctuaries–in weeds or other cover, and depth,” says Gilbert. “When a lot of people are fishing along a break, for example, it spooks them. The fish go off the edge and out over deeper water.

“Even though on a normal day the better fishing might be on the break, up shallower,” he explains, “when pressure comes, a lot of those fish are driven out over deeper water. You can turn pressure into an asset.”

Case study: Gilbert and partner Joe Pikulski had good fishing on an inside turn during practice for a national ice event. “On the day of the tournament it was crowded in there,” says Gilbert, “so we pattern-drilled [created holes according to a grid] anything that wasn’t touched on the outside of the crowd rather than inside. They drove ’em to us like a deer drive and we won.”