Cast and Blast: Duck Hunting and Fishing for Redfish in Texas

The Texas Gulf Coast is one of the most important waterfowl wintering areas in the Central Flyway. More than 80... 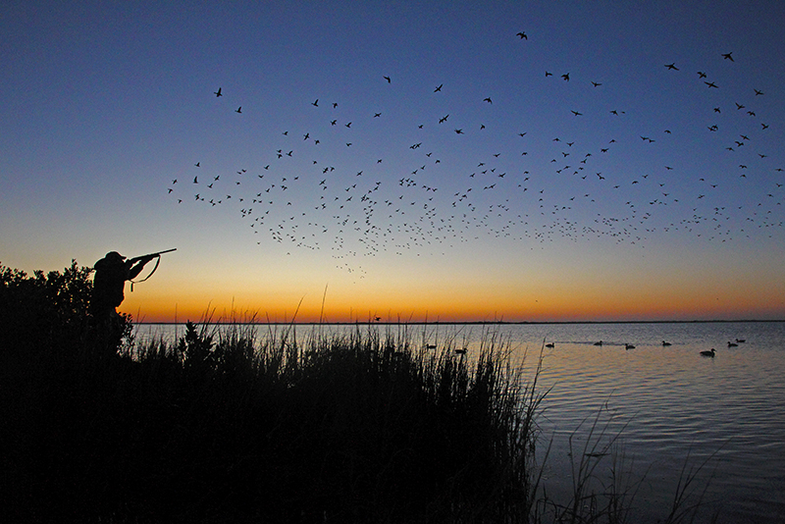 The Texas Gulf Coast is one of the most important waterfowl wintering areas in the Central Flyway. More than 80 percent of the continental population of redheads winters there along with good numbers of pintails, wigeon, teal, gadwalls, shovelers, and mottled ducks. Most of the hunting is concentrated in the marshes and protected bays along the coast. Matagorda Bay, San Antonio Bay, Baffin Bay, and the vast Laguna Madre all support good duck populations.

Redheads are attracted to this region for its protected waters and abundant food supplies. They feed largely on the shoal grass—a submerged aquatic plant that is scattered throughout the shallow bays and estuaries. Pintails, wigeon, and other puddle ducks often feed in rice fields and freshwater marshes inland, returning to the coastal areas to roost.

The shallow bays along the Texas Gulf Coast support one of the best red drum, or redfish, fisheries in the nation. A determined angler can catch a redfish virtually every day of the year with conventional tackle using lures or live shrimp, or with fly fishing gear. Sea trout are often mixed in with the redfish.

The 2014-15 duck season in the Texas southern zone was November 1-30 and December 13 to January 25. Next year’s season should be in the same time frame. Both redheads and pintails are early arrivers, with good numbers present by opening day. Other species migrate with weather patterns—as it gets cold up north, the birds are pushed south to their wintering grounds. Therefore, the second half of the season is best for the greatest number of birds and the best variety.

Fishing for Texas reds is good every month of the year with some of the most consistent action in the fall and winter. The biggest fish are generally caught during the bull red run that can happen anytime between July and early November. The fall and winter months can produce heart-pounding action when school-size reds from four to eight pounds forage in the shallows. Look for tailing reds as they search for shrimp and crabs on the flood tide.

Anytime during the duck season is good for a cast-and-blast trip. Duck hunting is generally a morning affair, with fishing occupying the rest of the day. Watch the weather, be safe, and be opportunistic. I have hunted ducks in the morning, headed back to the dock for lunch and a change of clothes, then fished for reds in the afternoon ending up with limits of both birds and fish. Redfish limits are three fish daily within a 20- to 28-inch slot and one oversize fish can be retained with a tag.

The Texas Coast has literally hundreds of miles of inshore waters protected by a series of barrier islands. It is in these inshore waters that the highest concentration of reds are found. While the entire coast can produce good fishing, I’ve found the area from Port O’Connor to Rockport provides consistent action. Port Mansfield provides the best access to the vast Laguna Madre, a shallow inland waterway separated from the mainland by Padre Island.

Where ducks are hunted in this ever-changing environment is dependent on the time of year, duck concentrations, and bay conditions. Sometimes it’s off Port O’Connor, Matagorda Island, or near Aransas Pass and Rockport. If you hunt on your own and you don’t already know the area, scouting is paramount. Think about going a day early to check out the area.

The bays and estuaries are open to fishing and hunting, and boat launching is easy at multiple locations along the coast. More people fish on their own than hunt on their own, but if you have the proper boat and gear you can make it a do-it-yourself cast-and-blast trip. If you’re not familiar with the area, then a guide is the way to go. They can be pricey but they know the area, understand the safety issues, and are almost always successful.

Bring conventional tackle, spinning equipment, fly-fishing gear, or all three. There are opportunities to use each of these fishing methods. Cast Super Spook Juniors, Corkys, or Rat-L-Traps; fish with live shrimp, mullet, or croakers; or fly fish with surface poppers, Clouser minnows, or shrimp or crab imitations. My favorite methods in the fall are tossing a Super Spook to tailing fish with a baitcasting reel and 15-pound line and fly fishing with a Clouser streamer on an 8-weight fly rod. Fishing from a flats boat and wade fishing are both popular methods.

Most duck hunting is from shore blinds along the edge of the barrier islands. Over the years, literally hundred of blinds have been built, and access is first-come-first-served. Another option is to make a blind of natural vegetation. Select a point where birds pass as they move to and from feeding areas. Decoys are an important part of the equation; a spread of three or four dozen is what it takes to consistently draw birds in close. Use a mix of redhead and pintail blocks.

In November, the weather is still generally pleasant. However, in December and January, weather patterns can change almost daily. It can be warm or downright frigid. Dress in layers and wear waterproof boots and rain gear. Even if it doesn’t rain, the rain gear will ward off the cold salt spray that is part of virtually every boat ride.

Where to Stay and Eat and What to See

An almost endless variety of accommodations and restaurants are available along the Texas Coast. Where you stay will be dependent on the area where you will hunt and fish. I’ve stayed in Port Lavaca, Port O’Connor, Rockport, and Port Mansfield.

Hunters generally fly into the Corpus Christi International Airport and rent a car. Another option is flying into Houston. Because there are more flights, the airfare is often less expensive.

An interesting side trip is to Aransas National Wildlife Refuge near Austwell, the winter home of the endangered whooping crane. In 1941 their numbers dropped to only 15 birds in the wild. Today about 300 cranes winter on the 140,000 acres that make up the refuge and surrounding areas. The refuge is also home to more than 400 different bird species, alligators, deer, javelina, and many critters.

Guided excursions range from $350 per half day of fishing or hunting to $900 for a full-day cast-and-blast trip for two people. Boats, fishing tackle, and decoys are typically provided.