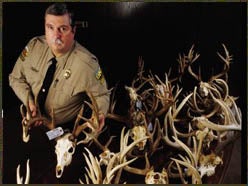 One would suppose that George Waters, 53, a former resident of West Branch, Iowa, who at press time was a resident of the Scott County Jail, didn’t set out in life to become the leader of the biggest poacher ring in Iowa’s history. Surely his high school guidance counselor didn’t praise the delights of a life spent slipping over security fences onto U.S. Army bases to kill huge whitetails.

No, it seems that something as puerile as male one-upmanship might have prodded Waters to kill so much so often so illegally. He and his friend and now prison-mate, Kevin Lee Chelf, poached at least 42 huge whitetails, 11 bull elk and 6 mule deer-animals that are collectively worth $338,000, according to Jeffrey B. Lang, the special assistant U.S. attorney who prosecuted the case.

Their Methodology
According to Lang, every September, when the elk began bugling in the Rockies, Waters would head for Colorado’s hard-to-draw elk units-areas for which bowhunters spend decades dutifully accruing preference points in the hope of gaining the privilege to hunt them. Once there, he would set up a back-country camp and go looking for big bull elk.

Waters’ favorite ruse was to pose as a fall turkey hunter-a perfect ploy, because the turkey season also runs through September and in many Colorado units centerfire rifles can be legally used in turkey hunting. After poaching each bull, Waters would tie its antlers high in a tree. The following spring he would return, cut down the heads and pretend he had found winter-killed animals. In Colorado it is legal to take long-dead animals out of the wild without reporting anything to the state-a loophole Waters exploited. After his Colorado poaching forays, Waters and sometimes Chelf would sneak onto the Iowa Army Ammunition Plant, a 19,300-acre base that is closed to hunting. Toting handguns, Waters and Chelf would climb the base’s security fence and go sneaking around in search of Boone and Crocket Club-caliber whitetails while avoiding M-16-toting security patrols.

After shooting a buck (many of their shots were investigated), they would cover the carcass, hide their guns and make for the fence. Days later, they’d come back to retrieve their booty.

“Waters kept an inventory of his loot,” says Lang. “He even named each monster whitetail he poached.” His log lists “Double-Drop Spade,” a 202-inch, 19-point giant and”Crown Buck,” a 195-inch, 17-point monster, along with 22 others. His vanity even prodded him to submit a few of these illegally killed bucks to B&C; under his mother’s name.

Money being an important part of the equation, Waters sold poached trophies at various auctions. As a part-time taxidermist, he found ways to obtain tags to make the animals appear legal. He was even brazen enough to lease some of the heads to bars around Iowa. After 10 years of poaching, Waters and Chelf thought they were invincible. How They Were Caught
In September 2002, Brandon Diamond, a district wildlife manager with the Colorado Division of Wildlife, received a tip about a suspicious vehicle. As he closed in, however, Waters’ mother allegedly saw Diamond approach and warned her son by radio. And so Waters escaped.

Despite the missed opportunity, Diamond found Waters’ camp. Nearby, he saw something up in a tree; it was the head of a bull elk. He then found the animal’s carcass.

Next came the lab work. Diamond shipped a sample from the carcass, the antlers and a pair of gloves that had been buried at the campsite to a laboratory. At the lab, DNA tests connected the carcass to the antlers. Evidence found on the gloves showed that they were used to handle the animal; the gloves even held Waters’ fingerprints and DNA.

Meanwhile, federal investigators with the U.S. Fish and Wildlife Service got a warrant to put a tracking device on Waters’ truck to find out who he was working with. And then an undercover agent purchased a set of antlers from Waters. Authorities then obtained a search warrant and soon confiscated 24 heads from Waters’ home.

Waters and Chelf both confessed and negotiated plea agreements with the federal and state authorities. Waters will serve 57 months in prison and will pay a restitution of $40,000. Chelf received 8 months in jail and $22,500 in fines.