After only a few hours of consideration, a Boulder County jury has found ex-cop, Sam Carter, guilty of killing “Big... 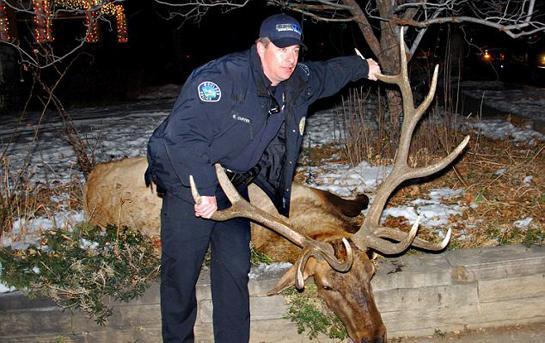 After only a few hours of consideration, a Boulder County jury has found ex-cop, Sam Carter, guilty of killing “Big Boy,” a beloved elk who frequented an upscale Boulder community.

The jury convicted Carter on all nine counts filed, four of which were felonies, and concluded that he had schemed to kill Big Boy and lied about putting the animal down because it had been injured. The charges included poaching, evidence tampering, and unlawful taking of a big-game animal.

The trial revealed that Carter had stalked Big Boy for days and exchanged text messages with a fellow officer about hunting elk, including ‘he’s gonna die,” according to Fox News. He shot the elk as it grazed beneath a crabapple tree on New Years day 2013. During his testimony, Deputy Jeff George said Carter had neglected to consider the houses in his line of fire, according to the Daily Camera.

“It was a very dangerous shot,” George said.

Prosecutors said that Carter shot the elk while on duty but didn’t initially report using his weapon, according to the Daily Camera. He then asserted that he had found the animal injured and put it down for humane reasons.

The death of Big Boy quickly outraged the community; residents demanded justice for Carter’s actions and organized marches and vigils for the animal, according to the AP.

“He had a good old time out there,” prosecutor Fred Johnson said, as reported by USA Today. “In the dark of the night…cloaked in his uniform…he shot that elk down, killed it on the front lawn.”

That quote might be a little melodramatic, but point taken: cops should follow the same game laws we do.

Carter has been stripped of his badge and will face up to six years in prison at his sentencing on August 29.