It's not hunting and it's not traditional target shooting, but paintball is the hot item at SHOT Show, and that means manufacturers are seeing green . 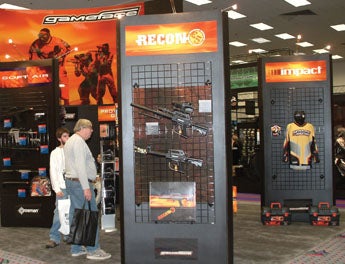 A splash of color was added to the lineup of SHOT Show exhibitors in 2005 when the paintball industry took over a section of the Las Vegas Convention Center. It was the first time that the industry’s members had exhibited en masse, and the predominant color at the debut was green.

“According to the 2005 SHOT Show Survey, the paintball category was very successful,” says Frank Briganti, manager of industry research and analysis for the National Shooting Sports Foundation. “Nearly one out of every ten attendees placed an order averaging over eighteen thousand dollars. That is great, considering it was the industry’s first appearance at the show and that it wasn’t located on the main floor.”

SHOT Show management was not surprised at the success. Jeanette Mannuzza, the NSSF’s director of SHOT Show operations, says that with the growth of paintball product sales among retailers, it was a natural to include the segment in the show.

A year later the decision proves to have been a sound one.

“Once again, we have drawn the leading paintball producers and suppliers as SHOT Show exhibitors,” Mannuzza says.

According to Jim Buckley, show manager for Reed Exhibitions, which produces and manages the SHOT Show, by late fall, 17 companies had already purchased 7,400 net square feet of exhibition space in the N100 rooms reserved for paintball.

Some first-year exhibitors were thrilled with the results at the 2005 show. Among them was J.J. Brookshire, business development director for National Paintball Supply.

“The show has been outstanding,” he said at the end of last year’s show. “In fact, the interest in our booth has been almost overwhelming. We’ve picked up a couple of hundred retailers and several million dollars in business.”

Leigh Washburne of Tippmann Sports, another prominent paintball exhibitor at the 2005 show, had been concerned by the segment’s location off of the main show floor, but he says there was plenty of traffic and further, it was composed of buyers who were specifically looking for them.

“All of our major accounts came by, and we got seventy leads for new dealers,” Washburne says. “We were very surprised by the number of gun shop retailers who showed an interest in our products. What they learned is that it’s not just selling the markers that brings in new revenue, but selling all of the accessories.”

Mike Clark, director of sales for the Kingman Group, agrees. His company sells its products directly to dealers, using an in-house sales team and manufacturers reps, so the SHOT Show provides a perfect place for the company to connect with buyers. Clark came out of the firearms industry, and he is aware of the opportunities paintball presents to shooting sports and outdoors retailers.

“Many of them are looking for new products that can help their bottom line and increase the number of younger customers coming into their stores-and paintball delivers that customer,” Clark says. “Paintball allows margins that are usually better than many high-volume gun lines and has a much younger demographic than standard firearms brands.”

Paintball, he says, can be a key in bringing in young people who will become long-term paintball customers and may also evolve into firearms shooters as well.

“Too many young people don’t have the outdoor education to come in and be a willing customer for the ‘Fall Goods’ products, but they know paintball. Put a paintball department in your store, hire some teens to work in the department and listen to what the customers want,” Clark says. “The payoff has been terrific for many of the dealers that have already tried it.”

** Paintball by the Numbers**
NSSF manager of industry research and analysis Frank Briganti offers these statistics on the paintball industry:

Participation in paintball in the lastt five years has shown a remarkable 66 percent increase, from 5.9 million to 9.8 million active participants (people six years of age and older who have participated at least once per year), according to the Sporting Goods Manufacturing Association’s 2004 Sports Participation Top-line Report.

The average male paintball participant is 21; the average female, 25.

The latest data show that paintball sports equipment (including markers, paints, eye protection, protective equipment and other accessories) is a $260-million-a-year industry.

According to SportscanInfo, a leading point-of-sale database system, paints account for nearly half of the category’s revenue. Accessories account for a third, and markers make up nearly 12 percent.

On average, participants spend $148 a year on equipment related to the sport. Frequent participants (those who play 20 or more times per year) spend $219 a year. Occasional and infrequent players spend $184 and $80 a year, respectively.