How to become a better handgunner, for competition or personal protection. 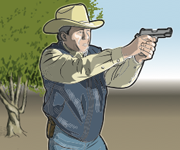 Action-shooting sports are directly related to defensive shooting. The sport came about from the desire to find a way to measure and evaluate defensive skills. Over the years, some differences have arisen regarding what works on the range and what will save you on the street. Instead of dwelling on those differences, it is more constructive to find the common ground that connects both handgun endeavors.

Whether your interest is primarily in the enjoyment of competition or the more serious business of saving your life, you will find the following shooting tips apply equally to both. In both cases, we need to shoot to win.
**
Guns, Gear & Training**
A serious shooter will buy the best gear he can afford. Good guns are accurate and reliable and take years to wear out. The same is true of holsters, magazines and ammunition. Buy the best and you will have fewer breakdowns and malfunctions.

This also applies to training. Good shots are made, not born. If you’re new to handgunning, the NRA Basic Pistol course is the best place to start. Once you’ve got a handle on the basics, do what it takes to study under the best teachers you can find. In the long run, quality gear and quality training will pay winning dividends.
**
The Basics:** Handgun marksmanship, of any kind, is made up of close attention to sight picture, breath control and trigger press. About once a month, the action/defensive shooter should use a range session to practice slow, accurate shooting on a bull’s-eye target. Cut one ragged hole, if you can. In action/defensive shooting, you will learn to compress the time it takes to perform the basics, but they are still there and still necessary.

Instead of spending extra money on more guns, the serious handgunner will use those funds to buy practice ammunition or reloading gear. There is no shortcut to becoming a better handgun shot; you’re going to burn a lot of ammo before you deserve the title.

Avoid the temptation to practice only the things you’re good at. It’s best to identify the skills that are the weakest and set aside regular sessions to work on improving these deficiencies. It’s great to go play with guns; just don’t get that confused with serious practice.

Dry practice begins with unloading the handgun and getting all live ammo out of the room. The smart guy checks to make sure his handgun is completely empty, and then checks again. There is no such thing as an accidental discharge. They are all negligent discharges.

With an empty handgun (I know, but check it again anyway) you can practice your pistol presentations, sight picture, trigger press, tactical and speed reloads (see sidebar at right on the difference) and malfunction clearances. During all practice sessions, you should work for smoothness, not speed. Speed comes with smooth practice.

I can’t over-emphasize the importance of practice, because good shooters aren’t born, they get that way by practicing. I am told that right up to the end, shooting icon Col. Jeff Cooper practiced a few pistol presentations each morning right after he dressed, and he put rounds downrange almost daily. He was a deadly shot. And if it was good enough for him, it’s good enough for the rest of us.

The Foundation: The action/defensive shooter will never do his best unless he has a good shooting stance. It’s what I call an athletic stance, much like that of a boxer or a tennis pro waiting for the ball. The feet should be about as far apart as the shoulders, with the support foot slightly forward. Knees are bent slightly, and the shooter’s weight is on the balls of his feet. The shooter is square with the target/threat and the upper body is leaning slightly forward. With this stance, the body helps manage the handgun’s recoil and the body is set to move quickly in just about any direction.

Test Your Skill: While there are a number of shooting drills that will help a shooter test his level of improvement, I prefer “El Presidente.” Three combat targets are placed side by side and one yard apart from each other. The shooter stands 10 yards away with his back to the target. At the signal to start, the shooter turns to face the targets (don’t forget that athletic shooting stance), draws and fires two shots on each one. He then does a speed reload and fires two more shots on each target to stop the clock.
Twelve center hits in 10 seconds is par for the course. But don’t expect to be that fast to begin with. Work for smoothness, especially in your speed reload. The fresh magazine is drawn from your carrier and held between the thumb and middle finger. The index finger is extended up the front edge of the magazine, with the fingertip touching the tip of the first bullet. It helps to push on that bullet just a bit to make sure it’s properly seated in the magazine. Smoothness, accuracy and practice will reduce your time on “El Presidente.”

Missing Fast: I continue to be amazed by the folks who won’t practice and, when they have to shoot for business, just end up spraying the area in hopes of hitting something. It’s really no way to win a match, and it’s a good way to end up in prison following a defensive shooting. Center hits are the only thing that win pistol matches and gunfights. You need to know where your bullet is going, because when it leaves the barrel, you own it. Remember the saying: You can’t miss fast enough to win.

Winning Mindset: Winners succeed because they have a commitment to success. This is the reason they get the best equipment and the best training and develop a winning plan. This is true whether we are talking about a gunfight or a friendly pistol match.

Bill Jordan said it best when he said that there is no second-place winner. The guy in first place is the winner, the guy in second place lost.

A winner studies the challenge before him and develops a plan to deal with it. He visualizes the moves that will win and takes advantage of every legal opportunity to insure that win. In short, he is totally committed to winning and nothing else matters. In an action shooting match, it is what gets the trophy. In a gunfight, it is what keeps him alive.

So there you have it, a realistic approach to developing winning handgun skills. Good gear, good training, good mindset and good practice, are the recipe for success. It’s what makes a winner on the range or in the street.