Why some whitetails grow non-typical racks. 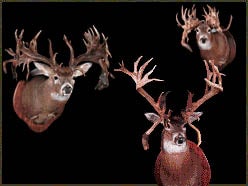 Deer antlers grow faster than tumors and are the only mammalian appendages that replace themselves annually. But it’s more than just their curious existence that inspires us deer hunters. To us, antlers are what dreams are made of. They go on the walls in our dens and their photos go in our wallets next to snapshots of our kids. Given this manic fixation, maybe it’s time we considered how antlers morph into the funny shapes they do.

**Like Father, Like Son? **
Many antler features, such as rack shape and tine length, are unquestionably coded in genes. But most deformed antlers are the result of physiological problems brought on by injury, parasites, disease or malnutrition.

Genetic deformities typically occur on both antlers, whereas defects that affect only one antler aren’t likely to be genetic. Lack of brow tines among mature bucks, for example, appears to be genetically controlled. Paired palmate antlers also seem to be hereditary but sometimes are the result of physiological problems or antler injury.

Velvet Bucks
The cycle of antler growth, hardening, casting (dropping off) and regrowth is a hormonal response to seasonal changes in the amount of daylight. This cycle follows the rhythmic rise and fall of testosterone in blood levels. Testosterone is produced principally by the testes, and if certain levels of testosterone are not achieved, as in the case of castrates, the antlers will remain in velvet. Insufficient production of testosterone causes small, deformed antlers among old bucks. Conversely, too much testosterone can cause some does to sprout antlers.

Uneven Racks
Injuries to the body can profoundly affect antler size and shape. Damage to one side of a buck’s body can cause antler deformity on the opposite side. This phenomenon is called a contralateral effect. A buck that has lost its left hind leg, for example, will tend to grow a shorter antler on its right side.

Velvet-Antler Injuries
When a velvet antler is fractured yet its blood supply is not severed, the broken antler may fuse and continue to grow. Cracked antlers generally heal with a bulge at the fracture site. Massive damage to growing antlers can cause abnormally large, misshapen antlers. In fact, gamekeepers in Europe once shot the velvet antlers of deer with birdshot to cause extra points to grow. Even today, deer farmers in New Zealand sometimes cut off the first growth of red deer spikes to induce branching.

So genetics is only one of the factors that account for abnormal antlers. Deer breeders seem to know this. I’ve seen a few pen-raised non-typical whitetails that looked like they were made that way by design.