Just call this hunt “the waiting.” Several days spent on a frozen stand define patience and what big buck hunting... 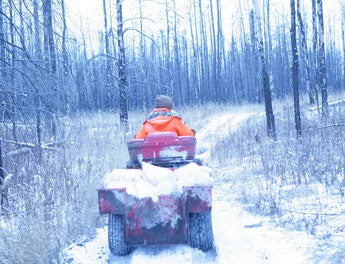 When it comes to persistence on a deer stand, Frank Lyon will match his handyman, Leotis Keaton, against anybody. "Leotis will go off into the woods toting nothing but an old World War I""vintage Springfield .30/06 and a pickle bucket that he turns over next to a tree and uses for a seat," says Lyon, the owner of Wingmeade Hunting Club in eastern Arkansas. "That's it""he doesn't take anything else with him except for some water and snacks. And he'll stay out there from daybreak to dark unless he gets a doe first. Once when I spotted him heading off into the woods with his gear, I asked Leotis what in the heck he did all day to pass the time." "'Well,' he told me, 'sometimes I sit and think, but mostly I just sit.'" Being able to sit without thinking is an attribute devoutly to be wished when you hunt in Saskatchewan for six consecutive days and spend 12 hours a day in a stand. I know""I've done it, and now, as Friday fades, all I have to show for it is a thousand-yard gawk that focuses on nothing and nowhere. Outdoor Life Online Editor
SHARE

Just call this hunt “the waiting.” Several days spent on a frozen stand define patience and what big buck hunting is all about. Original photography by Curtis Trent, story by Colin Moore.